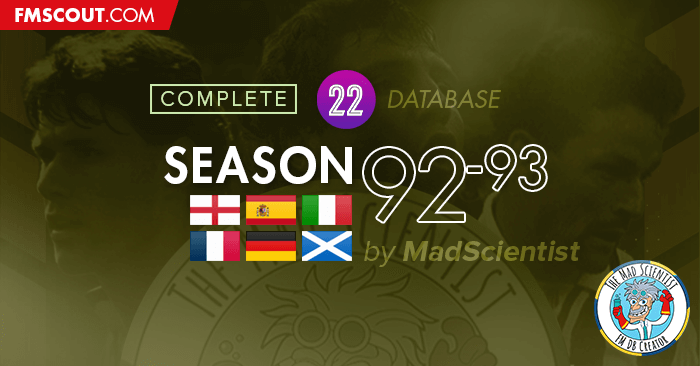 This database takes you back to the 1992-93 season. Relive and change the history with some of the biggest legends of all time.


This is the full and complete database version. You can choose between 8 playable leagues in 6 nations!

Travel back in time to an era of football where some of the greatest players of all time roamed the world. This Football Manager 2022 throwback database brings back some epic teams, managers and players from around the world in the original leagues and teams from 1992/93. If you don't remember 1990's football, this is a great and fun opportunity to learn about an epic football era.

In the event of the 30th anniversary for the very first edition of Championship Manager, we're celebrating the 1992/93 season with a brand new throwback database. This season was the inaugural season of the English Premier League, second season of the Champions League, and there where still a competition named the Cup Winners Cup. Besides that some of the greatest legends of all time, roamed the football world at this time.


This is the 1992/93 season database. Everything in the FM22 database, has been reverted to 1992. All the leagues are as they where back in 1992, with all the teams from back then. So now you have the chance to train and coach all the legends from the beginning of the century, in the best football management simulation game ever. To get the full experience please read the instructions below.

The player attributes are copied manually from various of editions of Championship Manager. So now you have the chance to manage all the legends from the early 90s, in the modern Football Manager match engine.

I've dedicated myself to this project for the last 6 months.

So jump into the FM Time-machine and travel back to 1992.

More leagues will be added and released in later updates.

IMPORTANT: Make sure when using the FMF file to choose the FM22 Default 22.1.1 database when setting up a new career. If you choose a FM22 database with an update, it will conflict with the 92/93 DB.

3. Add your manager and select the club you want to manage.

3. Click on the "Advanced Setup" button to select the leagues of choice and database size settings.

Logopack instructions
1. Extract the contents of the 1992-93 Logos Patch.rar file to the "logos" subfolder of the "graphics" folder.
Documents/Sports Interactive/Football Manager 2022/graphics/logos


Important: If you have other logopacks installed, you need to remove them to avoid conflicts.

2. Open FM22 > Preferences > Interface, and hit the "clear cache" button - then return on the same screen and "reload skin".

Facepack instructions
1. Extract the contents of the V1.zip file to the "faces" subfolder of the "graphics" folder.
Documents/Sports Interactive/Football Manager 2022/graphics/faces


Important: If you have other facepacks installed, you need to remove them to avoid conflicts.

2. Open FM22 > Preferences > Interface, and hit the "clear cache" button - then return on the same screen and "reload skin".