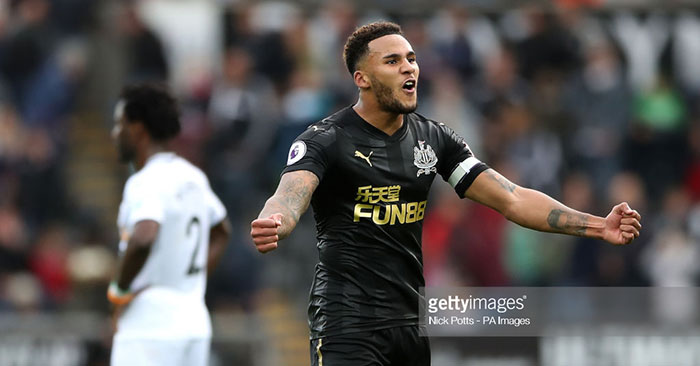 The Evening Standard reported last week that Premier League giants Chelsea are monitoring Newcastle United defender Jamaal Lascelles with a view to sign him in the summer.

The Blues are keen to add a central defender to their ranks in the summer, and identify Lascelles as a perfect fit for the club.

The Londoners are looking to build a team with more English players around, and in that respect a move for the 24-year-old makes sense.

Lascelles has signed a contract extension this year and therefore Newcastle are not in a hurry to sell him. In fact, Rafael Benitez has said in a recent interview that it will be too soon for Lascelles to move elsewhere.

Benitez added that he is a key player for the Magpies, and that he would be happy if he stays here for a long period of time.

However, should Newcastle sell their skipper if a good offer comes their way in the summer and they can reinvest in the squad? Newcastle are expected to be challenging for the top 6, not struggling to get in the top 10, and every season the mobile betting and pre-season odds favour them to finish in the top 10. However, if they lose their best players and the money isn't reinvested, what's the point?

There are two ways of looking at it. Firstly, Lascelles is gradually improving as a quality player but he is not irreplaceable. He has gone from strength to strength under the guidance of Benitez, and may well become a club legend by committing his future at the club, but unless he plays alongside a group of really world class players, he will never be able to take his game to the next level.

That brings us to the next point - why can't he achieve that with Newcastle? Well, certainly he can, but given Newcastle's financial plight, Mike Ashley's dour refusal to invest more in the squad, and the club takeover being far from done, can someone say with assurance that Benitez can bring in world class players in the squad and take the Magpies to the next level?

Is there any guarantee whether Benitez will at all stay at the club beyond the summer? Then what's the point in clinging on to sentiments when another club is ready to spend £50-£60 million for one player?

Even if Benitez stays, there is no guarantee that Ashley will hand him a huge transfer kitty to bring in players of his choice. Instead, if he can get £50m-odd from Lascelles and with Ashley investing another £30 million, he will have a decent transfer budget to rebuild the squad.

Obviously losing a player of Lascelles's quality will be a blow, but Newcastle would cope up if good players are brought in.

On the other hand, if the club takeover indeed takes places, then obviously Newcastle will be in a better position to refuse all advances from Chelsea. But unless that happens, selling him at a high price looks a more sensible decision.