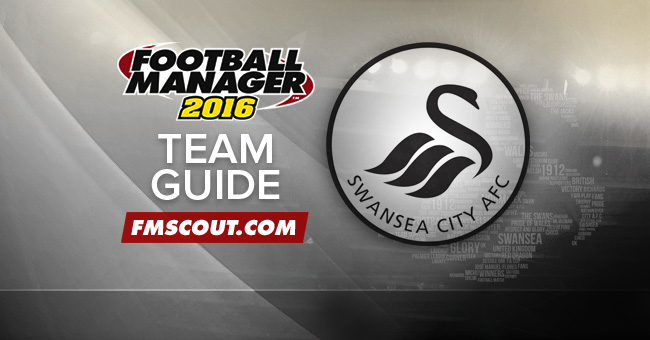 So you’ve decided you’re interested in taking over Swansea? The small South Wales city boasts an impressive rise to the Premier League, but now they’re ready to take it to the next level, are you capable of helping them do just that?

By 2005, there was a new air of optimism at the club as they prepared to leave the Vetch Field after more than 90 years to move into the new purpose-built Liberty Stadium. The move from the Vetch was completed in style with the club securing promotion to League One. Further progress in 2007/08 saw the club promoted, as Champions, to the Football League – Coca Cola Championship.

The following three seasons saw the Club improve its league position year on year, despite having a new manager each season! In May 2011, 40,000 “Jacks” saw the Swans beat Reading 4-2 in the Championship Play Off Final at Wembley to return to the top flight of the English Pyramid for the first time in 30 years.

Finishing a creditable 11th in its first season in the Premier League, the Swans had yet another change of manager with the legendary Dane, Michael Laudrup taking charge of the Club in May 2012, for its second Premier League season. The season proved one of the most successful in the Club’s history with a top ten finish and the Club’s first “major” trophy – the League Cup.

So you’re transfer budget isn’t huge, I admit that, but there’s players in the squad that you could potentially look to sell before making investment. 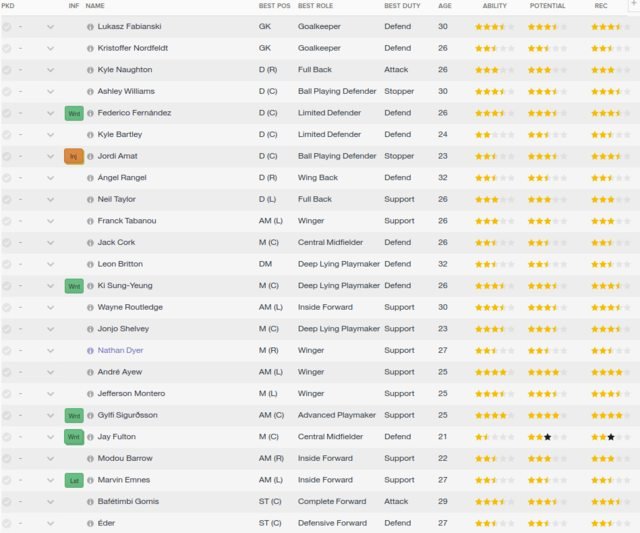 With Polish international Lukasz Fabianski at the club, your search for a starter goalkeeper ends here. Fabianski is more than good enough to start in goal for you in your first season.
Kristoffer Nordfeldt offers a suitable option off the bench, I encourage you to play him in cup games and to give Fabianski a rest.

You’re spoilt for choice when you look to central defence. Club captain Ashley Williams provides you with a formidable back line, commanding the whole defence to make sure everybody knows their roles. Federico Fernandez offers you a great partner to Ashley Williams, with Bartley and Amat providing great cover off the bench.

Your full backs could do with some extra back up, Kyle Naughton is good enough to start in your first year at Right Back, but you could potentially look at a backup replacement for Rangel. If you can find a good enough youngster add Rangel to the transfer list and bring someone new in.
Neil Taylor provides a great option at left back but with a lack of a backup in that position signing a new back up left back should be high on your list of priorities.

You’re blessed to have 3 top quality midfielders who can comfortably control the centre of the park. Shelvey, Cork and Ki provide you with a wide variety of skills. Not much improvement is needed here, although it is important to note that PSG will buy Ki Sung-Yeung for £20m in your first season.

Wayne Routledge and Andre Ayew will give you good starting options for your first season, but in the long term you may look to replace Routledge. Emnes and Tabanou are more than likely not good enough for the future so consider shipping of Emnes and finding a suitable replacement.

You have one player in Central Attacking Midfield, and that’s one of the best players at the club, Gylfi Sigurdsson. I suggest selling him, it may sound crazy but with some negotiating you can get £30m for Sigurdsson, this give you the funds to sign a replacement and have money left over to improve other positions.

Gomis and Eder make up your strike force, I’d suggest looking for another striker and possibly selling Gomis. He is known to blow hot and cold and with other options available you can hopefully pick someone up who can replace him.

You’re going to need to sell some players to raise funds, below are my transfers after pre season.

We’ve sold some big players to raise funds, including selling South Korean midfielder Ki Sung-Yeung to Paris Saint-Germain for £15.5m, and Icelandic Gylfi Sigurdsson for £22.5m to Chelsea. Also we saw Leon Britton and Angel Rangel and Bafitimbi Gomis leaving the club, all together this gave us £40m to help improve the squad.

With the extra money I have been given, I’ve managed to sign some quality players for the team that will be starting in the first team this season. 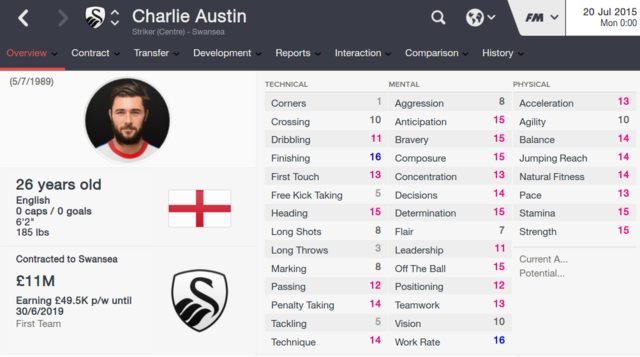 Overall I am very happy with my transfers and I now have enough players to form a strong starting 11. 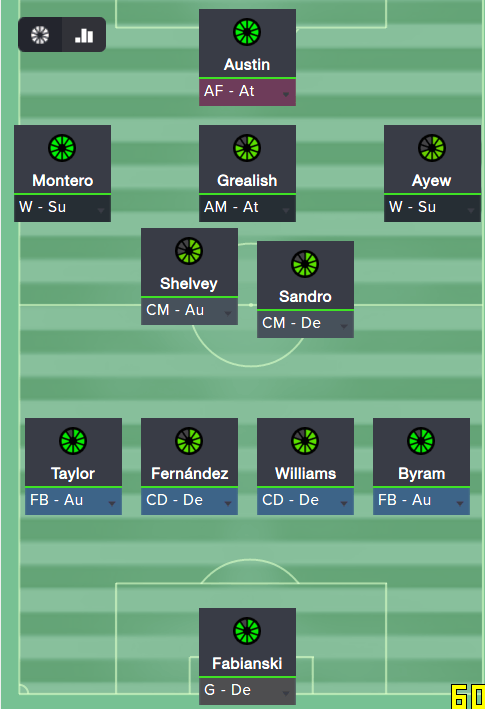 A typical 4-2-3-1 suits this Swansea team down to a tee. With a strong back line and the signing of Sandro in midfield, you’re able to paly some risky attacking football and still be able to rely on your defence to come up trumps.

Your attacking force is formidable with quality in all areas on the field, the trickery and pace of Montero will give opposition defences headaches, wonderkid Jack Grealish should link up well with Charlie Austin up front and Andre Ayew is a force to be reckoned with on that right wing.

You should now have all the necessary information to take Swansea to the next level.