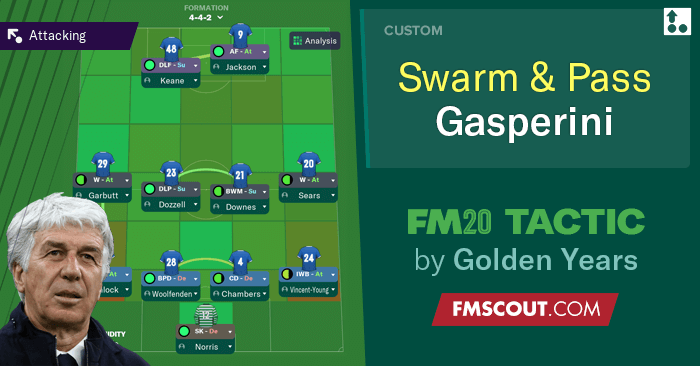 Tested over two seasons with Ipswich Town, starting in League One. Before the first season, Town were second favourites for promotion, so you’d expect them to do well. However, maybe not winning-the-league-by-30-points well: 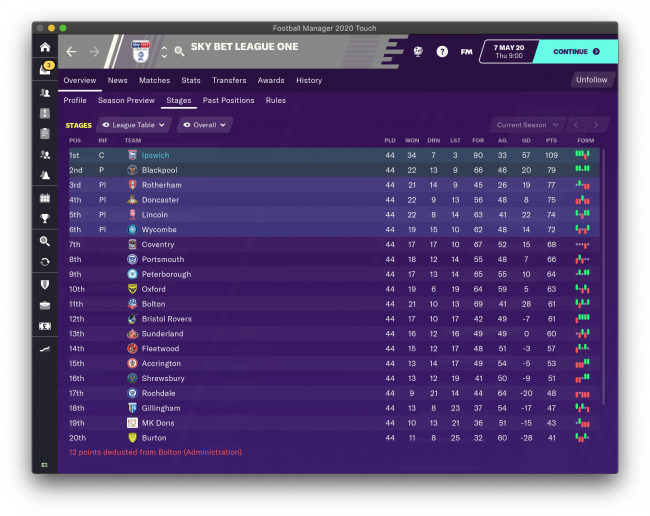 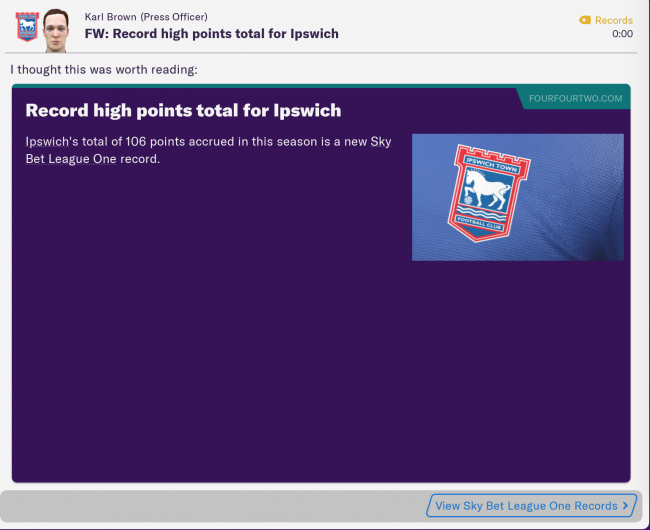 Or winning automatic promotion to the Premier League in season two: 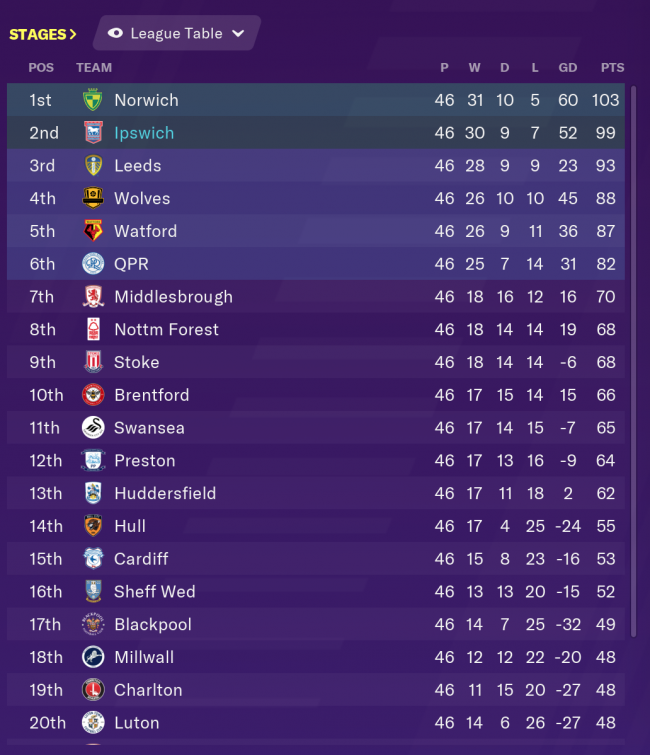 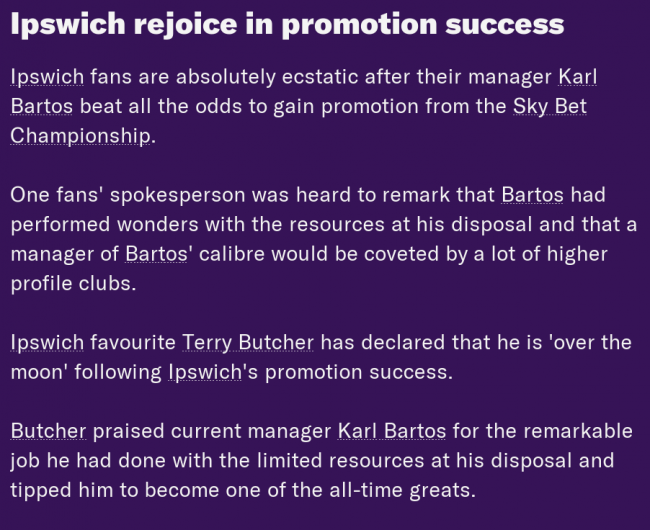 Other highlights included a Carabao cup win over West Ham, a 5-2 away win at Wolves, a 5-1 away mauling of Swansea and a 5-0 defeat of Watford at Vicarage Road. In season one we drew Arsenal in the 3rd round of the FA Cup, and lost 7-4 at the Emirates (which the board held against me for the rest of the season – so it goes).

No special training or match instructions. I did begin season one drawing a few games after totally dominating for 80 minutes. This made me look at formulating a second version where we played more cautiously, dropped deeper and slowed it down in order to defend a lead. This worked fairly well, but once my strikers started firing I didn’t bother as we’d end up winning comfortably home or away. As with any new tactic, it can take time to bed in (although for some reason this seems to return spectacular pre-season friendly results, including a 1-0 win over Liverpool).


Football Manager is all about stories and trying ideas. It’s 20 years since Ipswich were last promoted to the Premier League, playing a fast, attractive, short-passing style of football (at least, that’s how I remember it). In the 1999-2000 season we generally lined up with a 4-4-2, and I liked the idea of using the most basic of shapes – wingers included – and teasing something creative out of it.

Incidentally, my favourite edition of FM was Championship Manager 2003, where I always used a pressing, attacking, short-passing 4-4-2 to great effect (life was a lot simpler back then).

At the same time, I’ve been looking into how Atalanta play. A similar sized team to Ipswich, they’ve reached the Champions League quarter finals. The ever-excellent False 9 site has a great article on Gian Piero Gasperini’s tactics, which I used to inform my effort.

Finally, Ipswich were relegated to the English third tier for the first time in nearly 70 years last season. It’s time to lead this once great club back to attacking glory!


With some influences and ideas in place, it was a case of figuring out how it all fitted together.


I started with the default 4-4-2, complete with wingers and full backs, and an attacking mentality. I wanted the lads to be able to express their creativity without fear, so set the team’s fluidity to flexible. I was already getting our Ipswich back!


I was keen to keep the wingers, but experience has taught me this doesn’t work when they’re paired with traditional full backs, especially if the full backs are also getting forward. In the game highlights they seem to occupy the same space, so I opted for attacking inverted wingbacks, thereby leaving the wide areas the sole remit of the attacking wingers. 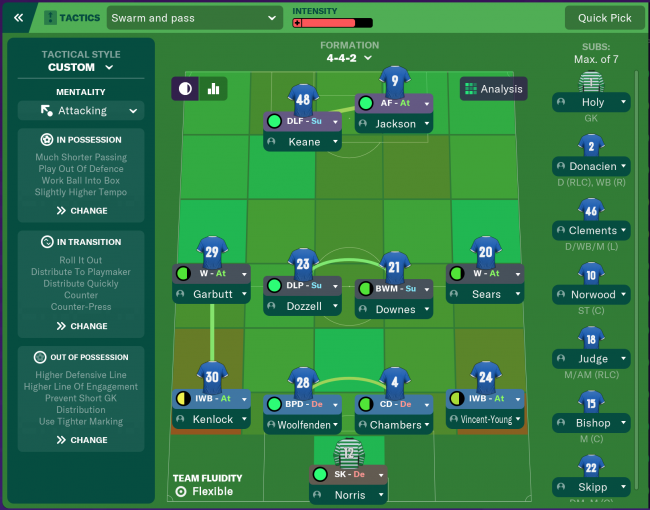 As, just like Atalanta, we’re playing a highish line and pressing from virtually everywhere, I made my goalie a sweeper keeper. The two centre backs are set more or less to whatever role suits them best, although, keeping with the general short passing vibe, I don’t use no-nonsense centre backs. Luckily, Luke Woolfenden is a natural ball playing defender, and I kept this role for the position, even when I needed to replace him. I also added a run with the ball instruction to the BPD, encouraging him to rampage forwards whenever possible, in the mode of the great Kevin Beattie or Titus Bramble.

In season two I secured Max Kliman on a free and made him a marauding BPD as well. Cue some beautiful passing moves sprung from defence.

We need a deep lying playmaker to collect the ball from the centre backs and set our tempo. He’s the only outfield player who isn’t instructed to press as much as possible, and his passing remains set at standard so he has the freedom to player a longer ball when he wants to. He’s partnered with a ferocious ball winning midfielder and flanked by two attacking wingers. Exciting!

The default 4-4-2 marries a deep lying forward with an advanced forward. This pretty much fit with my late 1990s/Atalanta idea as the DLF can link with the midfield to provide more creative options around the edge of the box, just as the two wider forwards do in Gasperini’s 3-4-3. If I was being more true to that formation, the other forward would have been a target man, but none of my first choice strikers could fulfill that role. As my best forward is most comfortable in an advanced position, and the second best as a DLF, I stuck with the default.

Finally, all the outfield players, with the exception of the DLP who we want to be available as soon as another player wins the ball back, are set to press, mark tightly and tackle hard as much as possible. This includes centre backs, full backs, wingers and strikers. This is what defines Gasperin’s Atalanta more than any other feature – it’s the swarm in the tactic’s name, and it’s great to see when opposition defenders are isolated by two or three Town players.


As you can see, the team is set to play much shorter passes, resulting in 55-65% possession over a match. We keep the ball, but the attacking mentality and slightly higher tempo means we don’t waste time when trying to hit players in advanced positions. We never let the opposition settle. 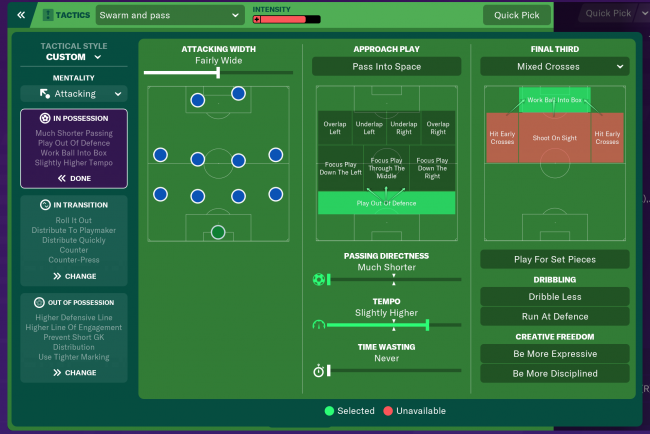 I was tempted to try an even higher tempo, but previous experience has taught me you need a really skilled set of players to pull this off. This is a young team finding its technical feet. However, it’s all about precision, so the ball’s played out from the back and worked into the box – there’s no playing the ball into space. Beyond that, the players are free to choose how they achieve that – through the middle or via the wingers, who aren’t instructed to keep as wide as possible, giving them freedom to come inside. As we don’t want the wide areas to get overcrowded, the full backs don’t overlap and, as we have enough bodies in advanced positions, they don’t need to underlap either. Making them attacking wingbacks ensures they carry the ball forward whenever possible, often into the penalty area to score the occasional goal. 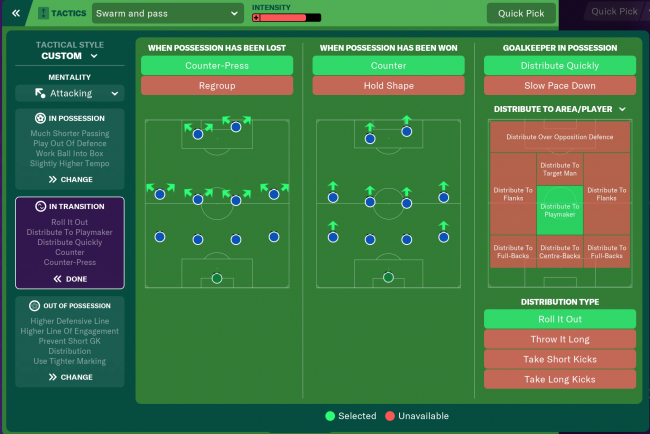 We’re going full Gasperini here. Counter press and counter attack, and get the ball from keeper to playmaker quickly in order to control the game’s tempo. Avanti!


In keeping with the isolate-opposition-defenders-and-harry-them-into-a-mistake strategy, we’re deploying high lines of engagement and defense. Again, I would have liked to set even higher lines, but without a spare covering central defender I’m nervous of leaving us open to the ball over the top. Having a sweeper keeper also mitigates this risk a little. 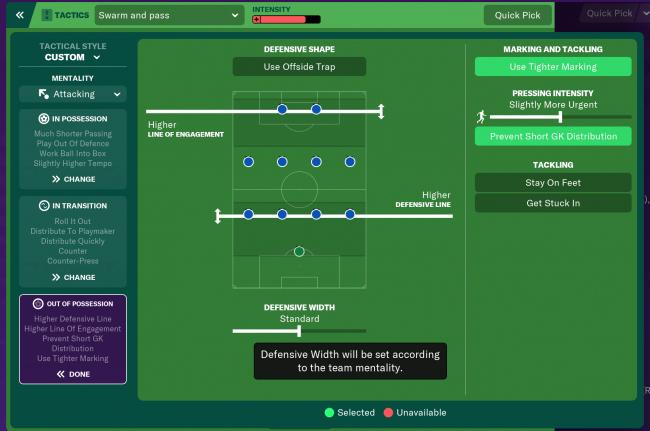 Unsurprisingly, the team is set to tackle hard and press more urgently, while we prevent the opposition goalkeeper distributing the ball with short balls – anything to turnover the ball. As ever, I’m a little wary of over-egging the pudding and leaving us open to counter-attacks by pressing too hard, and we don’t want injuries to disrupt the season because we’ve over exerted too often.

You will get fined for lack of discipline as six or seven players can get booked in a match. That’s just our spirit.

In fact, setting the whole team – including all the defence – to press and tackle hard is wild. The opposition is swarmed and, unless they’re patient and/or really good on the ball, end up relinquishing possession for Ipswich to launch another lightning, pinpoint attack. As with Atalanta, this can result in an element of defensive shapelessness which a good team can exploit – see the 7-4 defeat to Arsenal – but hey, that’s better than a boring 1-0 defeat at Shrewsbury. High scoring, free-flowing football is what Town fans expect.


Who really understands the FM algorithm? What works – and why – provides one of the great storytelling elements of the game.


With wingers and overlapping, attacking fullbacks, the wide areas can become congested – players clumsily dance around each other, thereby leaving other areas undermanned. If fullbacks tuck in and join the central midfield in possession, wingers have space to exploit and players are used more effectively.

Always have a passing option and overrun the midfield


While a midfield duo might normally struggle against a trio of opposition players, supplementing the central midfield with two attacking inverted wingbacks, a marauding centre back and a forward who drops deep means there are always passing options available. Take this example, where the DLP (no. 23) BWM (no. 20) and two wingbacks (no.s 30 and 24) form a tight central midfield quartet that outnumbers the opposition’s three in a 4-2-3-1: 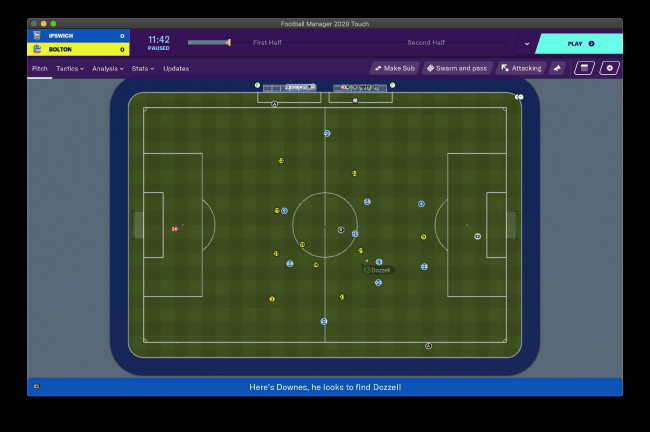 
As you can see from the diagram, two attacking wingers and two strikers present the midfield with lots of dangerous options in forward positions. Making the wingbacks attackers only adds more possibilities!

Common patterns of play include knocking the ball quickly around the midfield quartet before releasing a winger who’s slipped in behind the defence to hit a cross from the byline, or blast the ball into the net. Alternatively, the inverted wingbacks can run with the ball from the halfway line into the penalty box, following the path an inside forward would normally take. Or the DLF will come and collect the ball, pivot and play in his strike partner. Sometimes the keeper and centre backs will exchange passes until one of the BPDs hits a winger. We’re not even averse to the DLP hitting a long ball over the top for the AF to chase, having drawn the opposition defence into a game of chase the ball for ten passes.


Most teams employ some form of central midfield three, or two pivots in a 4-2-3-1. The problem with this approach is finding a clear, separate role for each player, just like when we employ wingers and attacking full backs. It’s a question of using resources efficiently – too many creative cooks can spoil the broth. In a 4-4-2 one player is responsible for orchestrating the team when going forward, the other with leading the charge to regain possession. Clear, separate roles make for a better use of team talents.

They can’t handle the swarm


Perhaps the most striking aspect of the pass and swarm is the suffocating press. The aim is to get the ball forward as quickly – and precisely – as possible, bullying the opposition into making a mistake in a dangerous position by sending two or even three players to hunt the ball down high up the pitch. Then the process starts again, until a chance is created or the opposition concedes possession. Defenders panic and give the ball away, or resort to hitting an aimless long ball straight to the BPD or sweeper keeper, who cranks up the machine and starts the team going again. It’s merciless, relentless and beautiful to watch as teams cave in and concede two or three goals in quick succession.