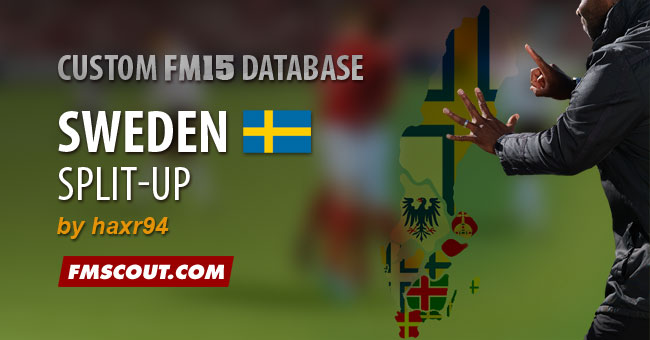 And now for something completely different!

After some internal problems in the great nation of Sweden, the country decided to split up into local regions. The Swedish league system is still intact but the national team split up in to several new nations.

The new nations consists of:

Östra Götaland (East Gothenland)
The east part of Gothenland (obviously), they have a historical hate towards the west side of Gothenland

Västra Götaland (West Gothenland)
West Gothenland has a large part of good players since it includes the city of Gothenburg, one of the larges cities in the former nation of Sweden. they have a historical hate towards the east side of Gothenland

Småland
The home nation of the great writer Astrid Lindgren and thus some of the characters in her books such as Emil i Lönneberga and to some extent Pippi Longstockings.

Öland
No one thinks that the tiny island of Öland will gain anything from getting their own country, but they are out to prove their doubters wrong

Gotland
Just like Öland, Gotland is a small Island, so they have a lot of doubters as well.

Uppland
The country has the former nation of Sweden's capital in it, Stockholm. This means that they might have the biggest talent pool in the whole region.

So basically what I've done is divided Sweden into these countries for a bit of a laugh, really. I also made a cup competition between these new nations called Svea Rike Mästerskapet which roughly translates to "The Svea Kingdom Championships". "Svea Rike" is another phrasing for "Sweden" that I used to make it sound more historical. I made it for myself but I figured that someone else might want to use this database since it offers a fresh and new challenge

I also made custom flags for these new nations, some of them are historically accurate and the other ones are based on the current coat of arms in those regions. You can download these flags HERE.

And if you have any questions or thoughts on improvements, please feel free to comment.

How to install Sweden Split-Up database