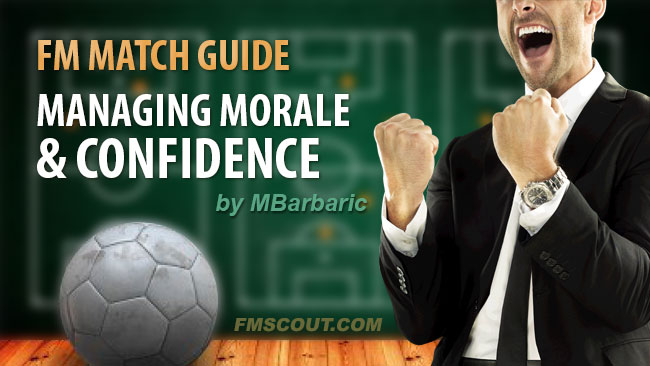 Morale for your players goes up and down under different circumstances. It does not matter if it is green or red, it is important to handle a situation in a way that will give your team an edge or at least make your team fight for every ball on the pitch.

This guide is created by MBarbaric and originally posted on the official Sports Interactive forums.

On the left side sits (over)confidence and on the right side sits nervousness. they click - clack, go up and down, around focus which stays in the middle.

When your team is winning your players slide to the left on the side of confidence. Somewhere between confidence and far left lays overconfidence, but it is quite a blurry line there.
When your team is on a losing streak, they slide to right and with every match lost they go closer to being more nervous.

How to determine where is my team on this scale?

Your form should roughly tell you where is your team sliding closer to.
If you're winning, you're going towards (over)confidence.
If you are losing, you are sliding towards nervousness.

This applies only for folks that watch major part of their matches (and that is not extended highlights).
If you see your team was fighting for every possession, it means they are focused.
If they didn't, they are either complacent or afraid.

There is a really nice screen that can help you understand things better. Go on team report tab in squad screen and click on "last match" where you can see the team talk report from your last match. There you will see the exact effect team talk had on your players for that particular match.

I believe a crucial factor for a good match is press conference.
Before having one, I think of where my team is currently at on that imaginary scale and try to imagine how they feel.

If they are confident, I try to remind them through the press conference how tough the next game will be. Therefore I choose the answers building up the opposition and downplaying my chances.

If I am in a situation where my team struggles under the pressure of playing below par and is underachieving, I try to relieve this pressure and rebuild the confidence slowly through the next 5 games.

If my team is winning and I'm close to a big match against a rival or a big cup game, I won't downplay the chances of my club. I will check the form and morale of opposition and try to make the next match an event of even bigger importance, especially if the opposition side is in poor form. The reasoning behind this is that my team is already on the confident slide and with an upcoming big match I'm going to remind them of the importance of the game itself so hopefully they will kick on.

Pre-match team talk is always based on the odds.
If my team is favorite to win and we are in good form, I'll challenge the team to go out and pick the win.
If the odds are even or if the odds are slightly in favor of the opposition, I will encourage my players.
If I am the underdog, I will go with a laid back approach and let the team play freely.

Half time team talk is based solely on the performance in the first half.
If my team is playing well (ratings above 7), I will generally give them credit, if it's below 6.7 i will criticize them.

For the post game team talk I take in account of the full match and the expectations before the game combined with the result. So depending on the result, how my players performed and my pre game expectations, I will decide what kind of team talk to give to them.

You have to be careful with players that have low pressure attribute (can be found out by checking players personality and media handling). You should pay attention not to put too much pressure on those players, because it can really backfire on you.
- Tip by genesimmons

I see team talks as a kind of a dial that you use to either demand more focus or to loosen up your players. The most demanding/aggressive team talks being on one end of the scale and the relaxing/high praise ones on the other. I don't pay any attention to match odds. These are an estimation based on who knows what exactly while the only thing that really matters is where the two teams sit on that very see-saw. So when I decide what to say pre-match I take into account how my team looked at the end of their last match, I look at the form and morale of the opponents and then decide whether the team needs more focus or loosening up. Or maybe they just need to keep going as they were in which case I say nothing.
Basically whenever my team is sitting on the complacency side of the see-saw I use the team talk dial to demand more focus. When they're on the nervousness side I try to loosen them up. When they're in the middle part I tend to not say anything at all.
- Tip by Äktsjon Männ

These are just the rough guides on team talks and you should take in account the type of your squad as well as individual players and form as well as importance on not repeating the same thing over as after while you will get repetitive.