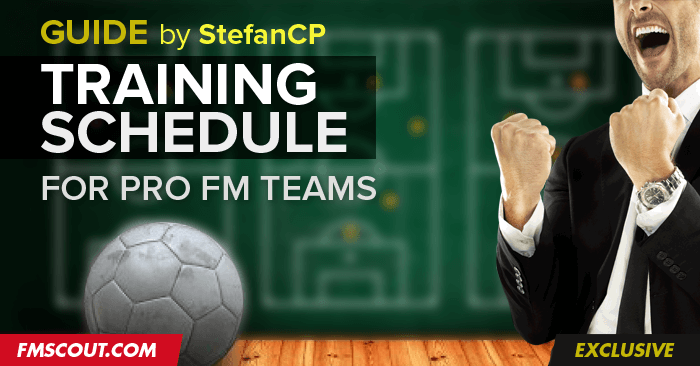 Please allow me to share my favorite (and only) Football Manager training schedule for small, medium or big teams, for the full season, preseason included. The reason behind this is because I want to reach the heights of maximum popularity within the FM community ( do I smell a touch of irony?). Or because I had enough of repeating the same things over and over again, so I would rather have a link to share on this wonderful FM website, cheers to Stam for this! PS: I hate sugarless tea! Be right back!

So, I have been playing the game since around 2000, more or less, I am too old to remember the details, so I consider myself experienced, but not a guru, so sometimes I probably do mistakes although I do think I am right. So use my training information PROCESSING WHAT YOU READ, not applying it brainlessly. It works flawlessly for me.

The training applies for any type of professional team, probably it can be adapted for amateurs and semiprofessional teams too, managing small teams gets boring fast after so many years near the game, so I'd rather change teams a lot during a save, or have self-applied difficulty conditions, than play with amateur teams.

ALL LATEST FOOTBALL MANAGER VERSIONS SUPPORTED. So, here we go.

NOTE: DURING THE PRESEASON ALWAYS SEND ALL TIRED PLAYERS HOME ON EXTENDED LEAVE, EVEN IF THAT MEANS PLAYING WITH THE YOUTH TEAM ALL THE PRESEASON FRIENDLIES. Tired players already have enough games in their feet, so they do not need a preseason, they need a rest, and they join ready to play. Else you will risk being hit by injuries faster than you could spell OUCH.

I. FIRST and SECOND TEAM - Reserves or U21 or whatever (if the second team shares Training Facilities with the first team).


The preseason length depends on summer competitions like the World Cup, the European Championship, etc. If I have a lot of players playing in those competitions, I pick a 5 week preseason. If I only have a few or none, I pick a 6, 7 weeks preseason, it depends on what league are you playing in, and how long is the break between seasons. Use your common sense on this, you are the manager!

a. Fitness on Average
b. Match Tactics (if the tactic is 100% Fluid, then change Match Preparation to Teamwork ), slider all to the left:

c. No rest before and after games
d. No friendly games

NOTE: If this is my first season with the team, I do this only for the second week, since players might have issues from the previous year training, and I want to avoid overloading the players or injuries in the preseason. The second week should be enough, then move to step 3.
a. Fitness on High
b. Match Tactics ( if the tactic is 100% Fluid, then change Match Preparation to Teamwork ), slider all to the left:

c. No rest before and after games
d. 1 friendly each 3 days, 45 minutes per player

NOTE (true for all friendly games): I pick 23 players in the game sheet, no player below 85% condition, to minimize the risk of injuries and the risk of overloading the players from the start. So that usually means that at the start of the preseason a lot of youth and reserve players will make the friendly match list. Do not worry if you lose some games, it's OK to lose preseason games to prevent overconfidence and complacency, no matter what team you are. Just make sure you win the last one, for me usually this means that my last 1 or 2 friendlies are with very weak teams, as well as the first 2 games, until the team gets fit again. The middle friendlies are against big teams, as big as possible.

3. Fourth week and the rest of the preseason

a. Team Cohesion on High
b. Match Tactics ( if the tactic is 100% Fluid, then change Match Preparation to Teamwork ), slider all to the left

c. REST AFTER THE GAME, NO rest before the game
d. 1 friendly each 3 days, 45 minutes per player (See the NOTE above)
e. In the day of the last friendly, I change Team Cohesion to Average, slider two clicks to the right

a. If we still have Match Preparation on Match Tactics, Match Prep remains the same until the tactics are 100% fluid. After that, I change the Match Preparation to Defensive positioning usually. This is your choice, at this point if you want something different, you can pick something else. Just keep the sliders and intensity from the previous training.

b. General Training is moved from Team Cohesion to Balanced after 6 weeks of the full season. I use an excel to write down the exact dates of each training change, so I do not forget about them.

c. After international breaks, if I have even one player that played in an international game, I am allowing REST BEFORE THE GAME too for 2 or 3 games, no more than 8 days after the first game. It's good for players to rest a bit and recover from either international games or from 2 weeks of continuous training. If the break is 11-14 days and I have in my first 22 players team a lot of players with the Match Fitness below 95%, I organize with the ones staying home a friendly game with a very weak team, with REST BEFORE GAME too, and I fill the ranks of the 23 players list with youth and reserve players. The first team players can play as much as 60 minutes, depending how close they are to 95% match fitness. Usually I allow them just 45 minutes per friendly, no matter the conditions.

d. During the early full season, or for some teams, during all the season, I organize a lot of friendlies so I keep my second 11 players with 95%+ match fitness. The reason is pretty simple. A bigger match fitness means that players will perform better when being called up for duty, as a starter or a substitute. It's better to have a 94% condition and 99% match fitness substitute than a 99% condition and 70% match fitness one. So use friendlies if you do not give them enough game time! Use reserve and youth players to fill the match squad without using the first team players that are close to 100% Match Fitness. Also, if you decide not to play a friendly game in the 2 weeks international breaks, make sure to have 2 days of rest in the weekend in the middle of the break.


I want the youth team to develop physically and to learn the first team tactic by heart, because the physical attributes develop fast only when the players are young, and because after that when they end up playing with the first team in some games they will fit instantly in the tactic.

a. Fitness on Average
b. Match Tactics (all season long), slider all to the left

c. No rest before and after games
d. I leave the manager to decide how many friendlies he wants.

a. Fitness on High
b. Match Tactics (all season long), slider all to the left

c. No rest before and after games
d. I leave the manager to decide how many friendlies he wants.

3. Fourth week and the rest of the preseason

a. Team Cohesion on High (because I want the players to relax physically too, no Balanced and no Fitness)
b. Match Tactics (all season long), slider all to the left

c. REST AFTER THE GAME, NO rest before the game
d. I leave the manager to decide how many friendlies he wants.
e. In the day I change this for the first team, I change Team Cohesion on Average, slider two clicks to the right

a. Match Preparation remains Match Tactics for the FULL SEASON. The only thing that changes is the the slider, which moves two clicks to the right.
b. General Training is moved from Team Cohesion to Fitness after 6 weeks of the full season, on Average, and it stays like that for almost all the season.
c. The last month or the last couple of months we pick Balanced instead of Fitness, so the players work a bit more on general attributes.

The youth team training allows you to specialize your players, while not wasting the potential attributes on useless balanced training. To achieve that at the full extent, you will also have to use the individual training instructions for each player, instructions that I (might) will cover in another tutorial. This way, players will spend their time improving their positional attributes instead of doing general training and wasting potential.

That's all folks. In the next training tutorial I will talk about individual training, and dos and don'ts. This training schedule together with the individual training makes loaning U21 players obsolete and useless, since you will be improving each of your valuable players in specific fields that will be useful to them and you in the future, at a similar rate with players having play time on loan, but without wasting the potential on the wrong training schedule.