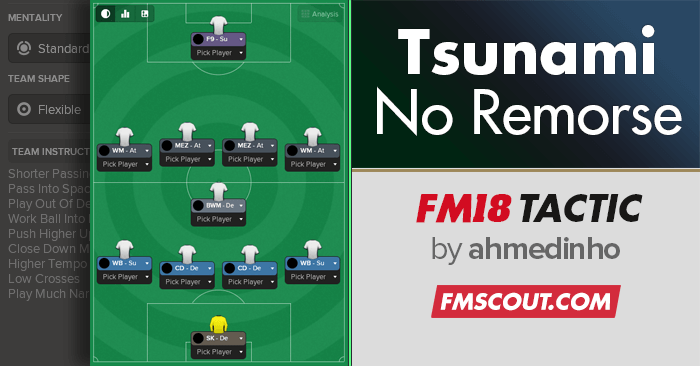 The overarching philosophy of this tactic is to DOMINATE. This doesn't mean 60%+ possession, it means overwhelming opponents with wave after wave of attack. Hence the name TSUNAMI... your opponent will be swept away by the constant barrage of waves.


To achieve the right balance to implement this way of playing, it was important not to create easy exit plans for the opponent. Hence the mentality was set at Standard. This brings about solidity.

The attacking impetus can then be given to individual players within the setup so as to ensure an appropriate shape that defends properly, but also overloads the attacking third.

To make sure we retain shape during the defensive phase, I went with a Flexible team shape. This ensured that my midfielders would contribute to both attacking and defensive transitions, regardless of their duty. This is critical as all 4 midfielders are on Attacking duty, and I need them to defend when we don't have the ball.

Other team instructions are geared towards a) snuffing out counter attacks quickly, and b) overloading the attacking third. To snuff out counter attacks, we firstly want to defend from the centre outwards, thereby limiting central space to be exploited. We do this by playing narrow, and also by instructing the WBs to sit narrow. This coupled with BWM in the DM strata ensures that any striker holding up play for supporting players will be swarmed by the defensive structure. In addition the fast tempo ensures we aim to win the ball back quickly. Opposition instructions are also fundamental to ensuring we execute the defensive phase properly.

To defend from the centre, we need to force the ball outwards. This is done by marking all central roles from the opposition midfield upwards. We also want to force the central players to play wide, so we show them onto the outwards foot. We then want to make sure the wide players are isolated, so we keep them on the outward foot too, so they can't play back inside to supporting players. If they do manage to play back inside, then the central players should be sufficiently marked that we win the ball back. Closing down more and a slightly higher defensive line makes our 2 banks of four a little more compact, leaving very little central space to exploit.

To overload the attacking third, we rely on the forward runs of the 4 midfielders. Having four forward runners, coupled with a F9 who comes deep creates chaos for a defending team. Using WMs also keeps them close enough to the action (not isolated like wingers) and very unpredictable as they can run or pass, cut inside or run wide. The MEZs also create havoc by exploiting the channels opening up by defenders trying to track the F9, and trying to mark the WMs. In attack, we want to play short and fast (ala Sarri-ball). The aim in attack is not to keep the ball, but to move it around between forward running players such that its difficult to stop the ball, as well as track the runs.

The type of players you need:

Strong central defenders, it will help if they are also fast
Intelligent wing backs, good decisions and positioning to make sure they balance attack and defence
A hard working BWM (good tackling, work rate and anticipation)
Your mezzalas must be attack minded (PPMs to get forward, into the box, they must also have decent passing and physical stats as they will be up and down throughout the game)
Your WMs should have good off the ball, finishing and teamwork, this will ensure they become your primary goal threats
Your F9 is critical to this formation, needs good technical ability, passing, vision and finishing, but also good mentals, work rate, decisions, off the ball.