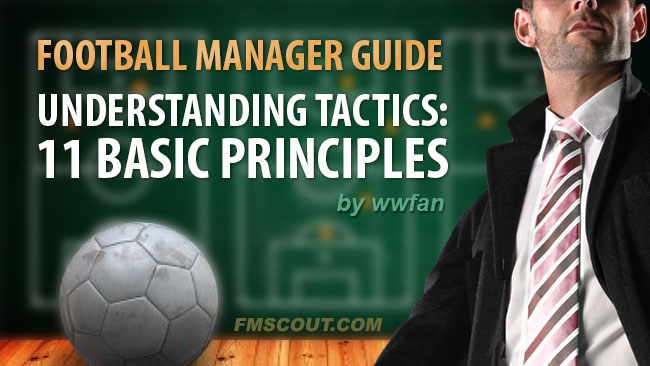 There are many ways in which we interpret football. Some people believe that a team should always employ the same tactic, no matter the opposition, conditions, and match situation. Others believe that a tactical approach should be altered to take into account absolutely everything, giving instructions to play the ball more direct in wet weather, specific marking oppositional threats, changing formation in relation to the opposition's strengths and weaknesses, etc, etc.

FM allows both playing styles, and all those in between, to achieve. The below advice is only intended to help people through the basics, after which their own preferred playing styles should begin to shine through. I hope this article stimulates the grey matter and helps with your enjoyment of FM14.

This guide is created by wwfan and was originally posted on the official Sports Interactive forums.

Very Rigid: Each player is given a specific job and is supposed to stick to it (usually 5+ different jobs across a team)
Rigid: Players are assigned a responsibility that contributes to a specific element of play (Defence, defence & transition, transition & attack, attack)
Balanced: Players focus on their duty (Defend, Support, Attack)
Fluid: Players are given instructions to focus on defence or attack
Very Fluid: Players contribute to all aspects of play

As you can see, each step reduces the level of specialisation. At Very Rigid, you have five plus different jobs, Rigid four responsibilities, Balanced three duties, Fluid two focuses, Very Fluid one method. In Very Rigid philosophies, you expect players to stick to their job description, so can assign multiple specialist roles. In Very Fluid philosophies, you expect everybody to do a bit of everything, which means specialist roles are redundant.

I consider the following to be specialist roles:


These four roles can fit in either camp, depending on your interpretation.


I consider the following to be generic roles:

I don't include keepers, although you might want to regard a sweeper keeper as specialist.


I generally suggest the following as a good rule of thumb (consider the either/or roles as 0.5):


Please note that these are my interpretations and not hard, fast rules. If you disagree and/or want to be more creative, it's up to you.

2: Adapt the roles to the player

You will find that many roles do not perfectly fit a player's strengths and weaknesses. Use the individual instructions to fine tune that player's skills to the role requirements. If you find you are fine tuning everything, it might be that you don't actually want the player to be performing that role at all and another one will be far more suited to his skill set. Don't blindly trust your Assistant!! Have a look and see. As player roles stick to the player, you can have one AMR set to an W/A role/duty, but another player with a skill set more attuned to creative passing set to a AP/S. You are no longer stuck to having the same roles active for all players without making lots of fiddly changes.

3: Become aware that the strategy names are more plastic than they seem

4: Focus on roles and duties and their combinations

Make sure you have one Attack duty in defence, generally but not absolutely necessarily combined with one Support Duty (note, this includes the deepest wide players in your formation if you are not using the Full Back positions), one Attack Duty and one Defend Duty in midfield, and one Support Duty (or TQ or F9) in attack. This type of structure encourages movement between the lines, which is absolutely vital for a dynamic tactic that creates multiple chance types. It also ensures a tight defensive system in which the team defends en bloc, rather than in disconnected lines.

If you play a lone FC formation, ensure he drops deep by giving him a support duty, a TQ or F9 role, as other roles run the risk of isolating him, resulting in his failure to contribute to play and relying on scraps and half chances. The exception is when playing an AMC directly behind him. In such formations, you might want your forward to stay high and range across the line to create space for the AMC to move into, so an AF/A or CF/A role/duty might be a better option. Make sure you have at least one no-nonsense midfielder role to break up play and provide a solid base for possession. If you want to use a playmaker, think about whether he'll be in the best position to hurt players, or will your approach see him isolated or marked out of the game. If you want to use a target man, consider whether his flick ons and knock downs will be easily picked up by a teammate.

5: Look at the team comparison page to determine how strong / weak your team is to the divisional average

Consider using the tactical adjustments to take advantage of / cover for this (e.g. if you have a very slow or lazy team, stand off more, whereas if they are quick and hard-working, press more). Although this will become less and less important as you shape your squad to a preferred style, the advantages gained from understanding how your team shapes up against divisional rivals could be vital when taking over a new club.

6: Use the team instructions to develop and save a favoured playing style, which should also suit your team strengths / weaknesses

For example, a highly technical team can sit deep and counter at pace, so using retain possession, pass into space, run at defence with a counter strategy may be worthwhile. A less technical but more physical team might want to impose themselves in a different way, so consider using more direct passing, hit early crosses, get stuck in with an attack strategy. There are all kind of possible ways to shape a playing style. At times you'll have a good enough squad to pick a style of your choosing, at times a style might be forced upon you. You might want to change styles on a match by match basis. There's no hard and fast rule. Just try to be logical in your combinations.

Recommended Reading:Make sure to read the excellent guide to pairs and combinations that will help you come up with a logical selection of instructions when selecting the roles for your team. It's updated with all new Football Manager 2014 player roles!


7: Before each match, consider looking at the weather conditions and the opposing team's formation to determine your match strategy

It can be very difficult to counter attack on a heavy, chewed up pitch, so you might have to abandon your preferred style and play an uglier game. You might want to expose an opponents lone wide player formation and exploit the flanks or look for overlap. You might be happy with your starting system. Although it's ultimately up to you how much you wish to adapt things in such circumstances, be aware that a lack of flexibility can sometimes be costly.

8: Look at the opposing team formation or player condition / skills and consider using OIs to counter them

You could use OIs to counter dangerous players or stop crosses coming in, or to target unfit, slow or cowardly players. Be wary of setting too many OIs as that can harm your team's overall structure.

During the game, don't be afraid to change things up through shouts and strategies if things are not working. Do it logically rather than willy nilly though. For example, assuming going more attacking equals more goals might be a bad move, especially if the opposition is sitting deep and packing the final third with defensive players. If you see such a pattern, you might find that sitting deeper and countering will produce more chances than becoming more aggressive, as it will pull the opposition out a bit more. Once you've scored, decide whether you want to push for more goals or hang onto a lead and change things / keep things the same based on that decision. Over time, you'll learn to trust your in-match decisions and develop a system that works for you. You'll know what to change, when to change and when to trust your team to just get on with it.

10: Realize that team talks are contextual

They do not relate to the scoreline, rather how expected the scoreline is versus the quality / reputation of the opposition and the football you actually played. Sometimes you can be delighted at 0-0, at other times, if you've scraped a 2-0 lead with very few chances against a poor team, warning the team against complacency is required. React to what you think should have happened, not the scoreline. It's worth noting that although team talks and media interactions generally do not have a huge influence on how a match plays out, they can do. Sometimes a good motivational strategy will result in a player having the game of his life, and vice versa. Consequently, it can be worthwhile carefully considering your motivational strategy before key games, as it might make a subtle but vital difference during squeaky bum time.

I worked out why my pass into space strategy wasn't working when I employed an attacking strategy. Watching through the match after a dour 0-0, it became obvious to me that everyone was rushing so far forward that my main deep creators were my BWM and FB/S. Not ideal. However, with a less aggressive strategy, my main deep creators were my AP and W/S, which was what I wanted. Hence, I abandoned the attacking strategy and played on the counter as a standard approach, changing my roles and shouts if I ever decided to play more aggressively (usually because of the weather / pitch conditions). If things aren't working as expected, there are always clues in the game if you watch closely enough.