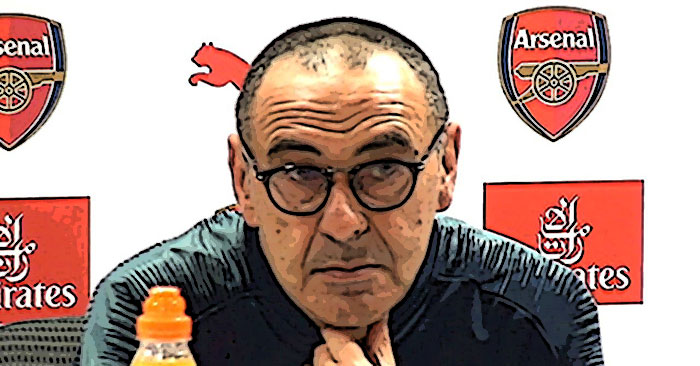 WHAT IF... Sarri signed for Arsenal?

Sorry about my english... I´m basque, so try to understand that. Thanks !

Maurizio Sarri it´s a football philosopher, wich means he wants he´s teams to play a especific style. He likes a posession-based style but with some innovations. The tema must move the ball more quick and vertical than (for example) in a Guardiola style. So we are talking about a vertical-possesión style. I think this video can explain it better than me:

2. CAN WE REALLY REPLICATE SARRIBALL IN FM?

In my opinion, FM has introduce the ``vertical tiki-taka´´ style, but the instructión are not the correct. WHY? Because Sarriball doesn´t mean to focus the game in the middle. Even in Chelsea it was focus on the flaks!! So, Sarriball isn´t possible to replicate aat 100% but we will try to introduce some of the principles that Sarri wants in his team, and he would introduce in Arsenal.

Sarri, used a 433 system in Chelsea and a 4312 in Juventus. We will use a 4312 . The reason is simple, we have you great forwards: Aubameyang, and Lacazette, and a great Advanced Midfield like Mesut Ozil. But we are going to introduce the 41212 (you can move the DM into the others 2 midfields line if you want)

4. FIRST OF ALL, THE SARRIBALL AT ARSENAL
:
MENTALITY:

-Standard width: Normally, we would put an Narrow width but the formatión of 4312 has it´s naturally enough narrow.

-Shorter passing: we all know that Sarriball its a vertical style but it doesn´t mean there´s no short pass. We want to introduce short passing and a quick move of the ball to the goal.

-Standard Tempo: I think Standard is going to be better. The reason is that in a higher tempo, you are saying to your team to do a fluid counter-attacking style, and we don´t want that. We need some tempo, but the necessary for a possesión style. So,we are not going to have spectacular stats in possession, the reason is that (for example Manchester City) has a tikitaka style introduce, so if the retain more time posessión, obsviously they will have much posessión.

- Play out of defence: Sarri wants his teams to start the game at the back, moving the ball to the next level.

-Low Crosses: This instructión it´s selected for our strikers. Because, they have good acceleratión and finishing.

-Work ball into the Box: We want to move from the back to the goal, in that terms, we want to have shots in danger areas after ``cooking´´ the goal opportunity.

-Dribble Les: This will help us to retain the ball, and move the ball consistently.

-Counter-Press: Once we have lose the ball, we are going to try to recover it at soon as possible.

-Counter or Hold Shape?? We will put in Standar for similar reasons we explain in Tempo. We don´t want a counter-attacking style, we want a vertical-posessión based team.

-Distribute to the centre-backs: As we have said, Sarri wants he´s centre-back to start the build-up of the team.

-Take Short Kicks: The goalkeeper is going to help to the centre-backs in the build-up

- Standard/ High Line of Engagement: The principle reason it´s that Sarri wants the lines to be near one into the other, we can put then in a ``standard´´ positión or ´´higher´´. I will prefer to start in standard.

-Use Outside Trap: Arsenal has great atributtes in teamwork, so a high defensive with this instructión must be a great combinatión.

-Extremely Urgent: Sarri wants his team to hard work in pressing to recuperate the ball.

- Prevent Short GK Distributión: In Sarriball we want the oppositión to make long balls and try to don´t build-up easily.

-Leno: Sweeper Goalkeeper-Support: We want the goalkeeper to help in the build-up of the team. The reason that we cliked in Support and not in Attack its becaus it is more natural for Leno.
- David Luiz: Ball-Playing Defender-Defend + Stay Wider: The same reasón, the centre-backs will start from the back moving the ball. In Chelsea, Sarri used David Luiz like that. The Stay Wider instructión it´s for a better comunicatión with the right wing-back.
-Papastathopoulos: Central Defender- Defende: + Stay Wider. However, in this time, he will hold the position and take less risks, just because he isn´t very good with the ball in his feet. Stay Wider has the same reason that David Luiz.
- Kieran Tierney: Left Wing-Back - Attack: With the middle recover, we want the wing-backs to attack all the wide spacies.
-Bellerin/ Matland-Niles: Right Wing-Back - Attack: the same reason that Tierney. We will not put stay wider because with an Standar width we have the width we want naturally created.

*iF WE WANT THE WING-BACK TO HOLD THE POSITION BETTER WE CAN MOVE IN SUPPORT DUTIES AND SELECT OVERLAPING INTRUCTIONS.

- Torreira: Deep Lying Playmaker: Sarri LOVES Jorginho positional play. He LOVES to have a Deep Lying Playmaker in the DM position to create a great ``play out of defence´´ style. We have selected Torreira in that positión because he has good defensivev atributtes to help the defence in ``out os posession´´. But Xhaka can play well in that position.
-Guendouzi: Box to Box: It´s his natural role, and in that terms he can give to us some balance and movement.
-Xhaka /Ceballos: Midfield- Support: We want different role of playmaker. Taking into account that we have selected yet a Deep Lying Playmaker and Box to Box we want another milfield in a balanced position. In other words, helping to Torreira to construct and Being a help for the Box to Box in middle spaces.
-Ozil: Advanced Playmaker - Attack + Move into the Channels: He will be the conectión of the midfiled with the attack. The reason for an attacking dutie is because we want him to move vertically in that zone, just like the Sarriball style demands. The instructión Move into the Channels is selected to move the player into those halfspaces to make definite passes to the strikers.ç

-Lacazette: Deep Lying Forward - Support + Roam From position: In Sarri tactics, we need a ``Dybala´´. In other words, a dynamic forward.
-Aubameyang: Advanced Forward: He will be our number ``9´´. Sarri loves Higuain, but specially that Forwards that have the goal instinct. 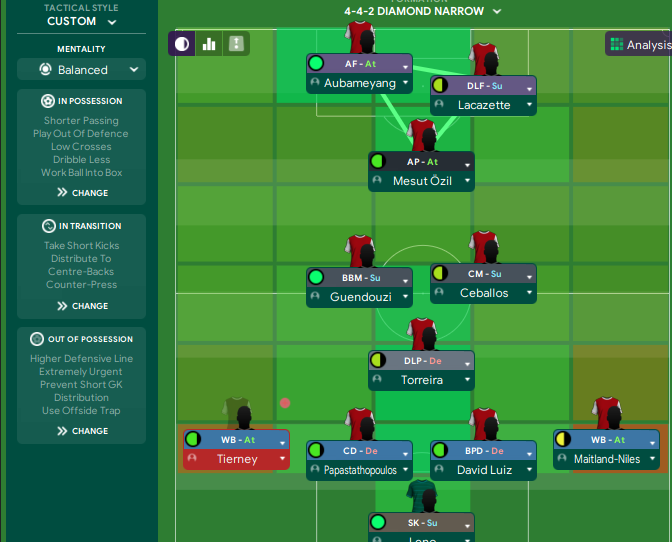 -Jorginho: If Sarri signs in a team, take for sure he will try to sign Jorginho, he loves to put him in the DM position.
- Ball-Playing Centre Backs: Upamecano for example...
- False 9: I think Lacazette can make good job being the ``dynamic´´ striker, but Dybala, Griezmann and other can be better.

6.I WILL POST RESULTS IN THE MIDDLE OF THE SEASON. For the moment i´m working in chapter one.

If you have an idea to do in the new chapter of this series, please coment (this idea was taken by that way)

Discussion: WHAT IF Sarri managed Arsenal?