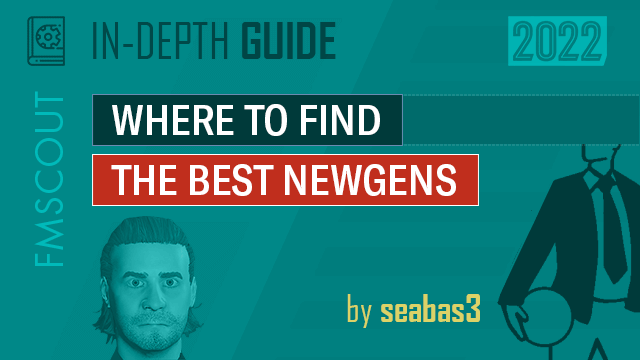 Developing a Newgen to reach their maximum potential is quite a difficult task, at times however – trying to even find these wonderkids is seemingly impossible. Here we will help you to explore which countries produce the best raw talents. Of course as is true to the realism of Football Manager it is not as straightforward as one would like to believe.

One of the simplest ways to bypass this issue is to use scouting tools available here on FMScout. Tools such as Genie Scout and FMSE are powerful programs which can highlight the abilities and probable developments of newgens. They also allow you to view key attributes in a club to see which clubs are the best for consistently producing decent newgens and with some tools even allowing you to edit them.

Another tool to use is the “In-Game Editor” that Sports Interactive provides for purchase for on-point editing or using the database editor before starting a new save.


What is a Newgen and Regen?

First things first – those of a certain age and those who have experience in playing FIFA and Football Manager will be familiar with the term “Regen” and still use it rather than the proper term “Newgen”. A simple error and one which many will bypass – but important to differentiate, especially for those coming from EA’s FIFA world.

A “Regen” is a regenerated player. This is how FIFA used to operate and the perception many people still have when beginning to play Football Manager, once a player retires – a new player is regenerated to replace that one player. Usually keeping the same position, nationality and attributes. This means that there is little fluctuation in terms of players available and the game is relatively straightforward – just look out for when Messi and Ronaldo retire and boom there is your next wonderkid. Some games have a mixture – some Regenerated players along with some Newgen players.

Football Manager is neither of the above two – it is strictly all newgen players. This means that all generated players coming into the game are not based on any existing players and can be considered completely “random”. This is of course the most realistic, but that means it's incredibly difficult to find the best newgens, so what factors are there to help us in this regard?

Think of who produces the best young talent in world football – you automatically think of Brazil, Germany, France and maybe a few others. This is what Sports Interactive have done behind the scenes, every country (or rather every association) has their own Youth Rating which is given between 0 – 200. With 200 being the absolute best.

Are there ways to edit or find the Youth Ratings? Through FMSE and the In-Game Editor you are able to find and adjust a nation’s Youth Rating. That makes it simple then if you want to go down that route, but a question remains - overtime can you influence a nation’s youth rating without using the editors?

Dynamic Youth Ratings does exist in the game. This means that over time, nations’ youth ratings can fluctuate both up and down due to a multitude of factors. This can include foreign investment or government investment, reputation fluctuations due to league, club or nation performances and a lack or increase of a world-class/star players coming from a particular nation.

Along the lines of dynamic youth ratings, we also note Game Importance in this section as well. What is it? Well game importance takes into account how the whole nation views the sport relative to the population of that nation. This is important to consider because it has a direct link to a nation’s infrastructure, the economy, the population and the willingness from the government to see improvement in the football economy of the nation. Over time this may fluctuate and/or a certain lack of interest or view of football or increase in its importance can, over time, affect the Youth Rating of a nation.


It is important to understand that a high-country youth rating does not mean that every newgen is good from that one country. Rather the Youth Rating is a factor which helps dictate which countries are the best at producing raw talent.

Here is the table for every association in the game and their youth rating.

It seems quite shocking some of the numbers and where some nations are ranked. Plus, when you go into some of these nations it may not seem like they have any good players. But this does not mean that lesser nations cannot produce high quality players, it is just on a less consistent basis or they do not have the foundations and infrastructure to increase the quality of players on a more consistent basis. This makes sense, after all considering how some of the world’s best players throughout history have come from nations which are not considered one of the best. In modern times, both Salah and Haaland are examples of world-class players who come from nations (Egypt and Norway respectively) that are not considered on the same level as Germany, Brazil, Italy and the likes.

So, what are the main factors to consider? We now know what associations to focus on in the beginning, but keep in mind that these ratings are now DYNAMIC and will fluctuate. Plus it seems rather difficult to scout - it will take forever to go association by association to continuously scout and find promising raw talents to invest in. To help cover the grounds, it would be best to scout by region - in the next guide, we will highlight and focus on what are the best Regions to scout in the game.

Discussion: Where to find the Best Newgens (Youth Ratings) in Football Manager 2022