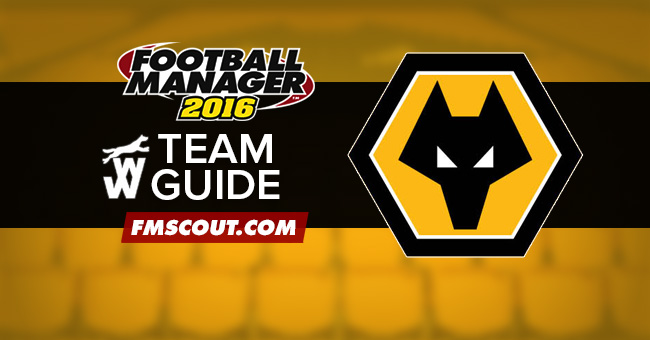 4 years ago Wolves were in the English Premier League. 2 years ago Wolves dropped into the third tier of English football. It has really been mixed emotions in the past few years for the Wanderers faithful but there is still huge potential at the club.

After coming extremely close to a play-off spot last term, Wolves have a large amount of younger first team players with good potential. However, there are gaps in the squad after the high-profile departures of Bakary Sako, Richard Stearman and the long-term injury of striker Nouha Dicko. 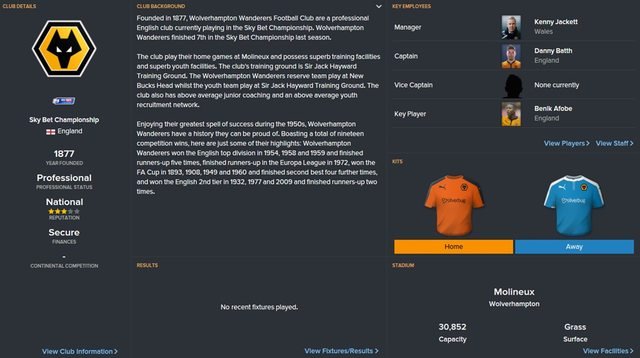 Here are the potential finances and budgets for your first season as Wolves boss at the start of the season.

These are the minimum and maximum budgets that the board offer you at the start of the 15-16 season.

The following suggestions for the most fitting formations are based on the starting squad without making any transfers at the start of the 15-16 season. 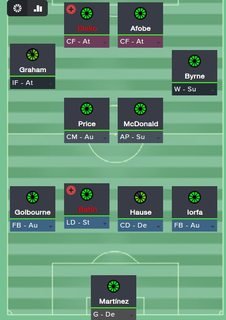 
A formation that consists of 4 defenders, 2 central midfielders, 2 attacking wingers and 2 forwards.

This is a formation I have used a lot in my 8 years of Football Manager experience. If you know you have 2 capable central midfielders and a solid back 4, this should work really well.

Wolves possess great pace, especially with the front 4 I have chosen. Dicko and Afobe are clinical and so quick, they could be the 2 best forwards in the league. Graham is young but has huge potential so starting him could be crucial and he would fit into this tactic as he is quick, as is Nathan Byrne on the right hand side.

The hardest part of getting this formation right is having 2 central midfielders who you know can control a game and help attack and defence as the wingers will try and push forward often. 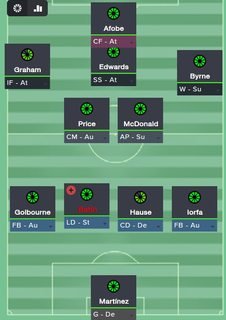 This formation is quite similar to the one above just dropping 1 forward and opening up a space for an attacking midfielder.

In this instance I have included the workhorse that is Dave Edwards as he never stops. In the shadow striker role he has the chance to work off whoever you start up front and help cause trouble for the opposition defence. 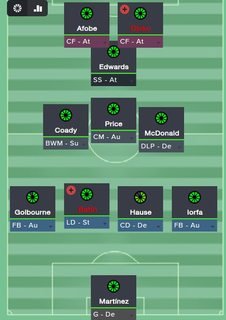 
The final, potential formation I have chosen is a 4-3-1-2 which includes 4 defenders, 3 central midfielders, 1 central attacking midfielder and 2 forwards.

I have chosen this formation as you have a really strong chance of winning many midfield battles and hogging possession. As Wolves don't start with superb wingers on this game, this might be a handy formation to use if you don't want to splash out on a quality winger. The central 3 offer wonderful balance with Connor Coady as a ball winning midfielder who isn't scared of a tackle and McDonald and Price who know how to pass a ball.

Goalkeeper:
Wolves start off this season with 2 very strong goalkeepers for the Championship in the shape of Carl Ikeme and Emiliano Martinez. I have tended to start with Martinez when I have played with Wolves as he has a tad more about him and does offer more potential. However, he is only on loan from Arsenal and you may struggle to keep him permanently. If you are looking for a Premier League quality keeper, it may be worth cashing in on Ikeme. As good as he is, he may not quite cut it in the top flight. (However, you may want to do this once you're promoted).

Left Back
Scott Golbourne is a brilliant left back for the Championship and could probably do a job in the Premier League if used correctly. Hause is also a decent left back but even better at centre back so you might want to bring in a stronger back-up. Tommy Rowe can play there but is very injury prone and it may be worth cashing in on him

Right Back
Wolves are an extremely lucky club to have Dominic Iorfa, I mean, any Championship club and even some Premier League clubs would be more than happy to have Iorfa. The right back department at Wolves is quite strong with 3 players who would do a job in the Championship. Nathan Byrne is a strong full back who is very quick which would be helpful if you used him as a wing back. You also have Matt Doherty who is half decent but could be someone worth cashing in on if you need the money.

Centre Backs
Again, Wolves are quite fortunate with centre halves and youth is on their side. Danny Batth starts off the season injured though so it may be worth bringing in a spare player to start off the season then sit into more of a rotational/back up role. Kourtney Hause and Ethan Ebanks-Landell would probably do you a good job until Batth is back but you would have no support. A more experienced centre back could also help with tutoring the likes of Hause and Ebanks-Landell among others.

Central Midfielders (CDM, CM, CAM):
Wolves have 3/4 really decent central midfielders. However, it might be worth bringing in a more defensive minded one (someone who can play CDM for times in need) and another CAM as Edwards is the only decent one. Coady, McDonald and Price are really impressive and will help a lot but it may be worth selling Saville.

Wingers:
The wide midfielder department took a huge hit for Wolves in the Summer as Bakary Sako's contract expired and they were unable to find a suitable replacement. It may be the difference between promotion or a mid-table finish or worse if you don't address the left midfield position. On the right hand side you have Nathan Byrne, James Henry and Rajiv Van La Parra who are all capable. However, on the left hand side you have young winger Jordan Graham who is full of potential but may not yet be ready for Championship football.

Forwards:
The front line the season for the Wanderers is fairly strong. You start off with 4 strong forwards, however, Dicko is out for most part of the season which is a real pain. Le Fondre and Afobe will still definitely do a job and Sigurdarson is a capable back-up, however, you may well get bids for him. If you do receive bids for Sigurdarson, it could be worth cashing in on him but it may require you to bring in 2 more strikers. I managed to bring in Dwight Gayle, but I did have to break the bank to do so. He is definitely worth the effort and money to bring in though!

Left Wing:
The side are in desperate need of a left winger. Lamah is available for quite cheap and would do a job whilst creating assists and scoring goals for a good fee.

Defensive Midfielder:
You may not want to play with one but it may definitely be worth investing in a CDM. Wolves don't really have an out and out CDM so Marcos Tebar from Brentford may be a good solution.

Forward:
Wolves have a strong front line, however it lacks depth, especially with Dicko's long term injury. You have a number of options, you can sign a back up for Le Fondre and Afobe or splash cash on someone such as Dwight Gayle to boss the front line.

As a whole, the Wolves squad has huge potential and is a club ready to get back into the big time with the right management. You will be predicted to finish mid-table in the first season but it most definitely isn't an impossible task to finish top 6 or even reach automatic promotion. The club may also have a takeover in the first couple of years too, which makes life at the Molineux a little more interesting.