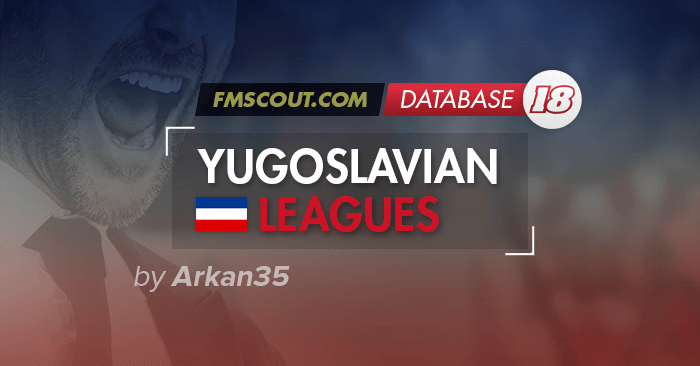 So first of all I want to say this isn't some "pro" database its simplified version of Yugoslavian league.

It is set up from 4 tiers national cup and super cup.
Every tier is made up from 20 clubs and clubs are sorted to tiers by their reputation so to know I wasn't biased towards any of clubs or nations.

I couldn't create new country as Yugoslavia so I used Croatia for it, every player from countries from ex-Yugoslavia has been transferred to new Yugoslavia.
I didn't transfer all other non playing people because it would take me too long mostly because I don't have powerful machine to run it smooth.

Somewhere it may appear something from Croatia (like legends and icons of Croatia) and there wouldn't be from other ex-Yugoslavia countries, that's because I didn't have time to research all that history and put into game.

I hope you wouldn't mind it because I mainly made this league so I can see how it would be to play with regional clubs from Balkan and how it is to have national team out of players from ex-Yugoslavia.

These are some screenshots of clubs in every tier: To replace the Croatian flag, so you have to "install" graphics pack which is called "Zastave". There you will find the flag of Yugoslavia and its logo.
Please note: I don't own rights to this graphics pack; it is only remade from a previous Yugoslavia database back in 2015 where I only adapted it to Croatia.

If you find some problems, report it to me and I will put my work and try my best to fix it... if something isn't fixable (like crash dumps that can't be solved) I will delete this page.
And if this attracts some big interest, maybe I will put some more work to develop it further so you can full enjoy it.

How to install database and graphics:

I hope you enjoy this, cheers!!