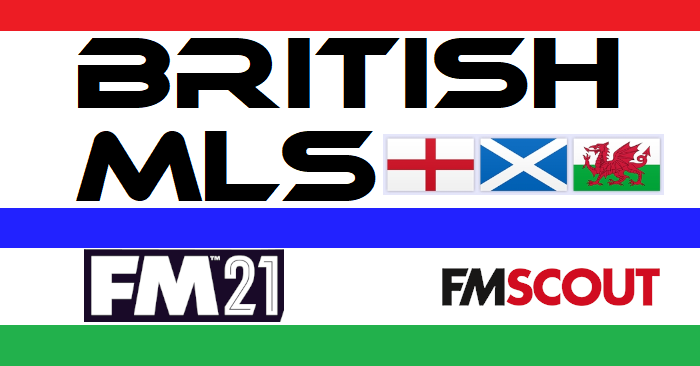 Britan says hello to MLS! League is now split into two groups (conferences), each group has 18 teams. After the end of the regular season, 16 teams qualify for play-offs. All games in play-offs are played on neutral stadiums to not give any team a 'home' stadium advantage.

But... don't worry teams still have their own academies, and youth teams. To maintain the number of British players I've also added important match rules:
- you can take 11 reserve players for game so your 'match squad' have total 22 players, from which 6 homegrown playersmust be homegrown players, as well as 2 of them need to be products of your own academy. This keeps a nice balance, and doesn't make FM engine AI being crazy on 'over' buying foreign players.

As for finances - money prizes are set for each place during the regular season, and of course, TV money is set as well. In addition to that, the play-off winner gets nice extra amount of cash. Money prizes are also set as well for FA and Carabao Cup.

Main difference between American MLS and British MLS is that here if your team is underperforming you might be relegated to lower league.
Of course you might as well start in British USL Championship and then win a promotion to British MLS, or if you wanna start in even lower level then you can try your chances in British USL League One!

Before the start of every new season teams in groups are re-drawn once again. This means for example if you start a game as Manchester United manager that in one year through the regular season you might play against Manchester City, but in the next one City might be in another group (conference) and you might meet City only during play-offs!

Please remember that original database: Premier League (20), Championship (24), League One (24), League Two (24) has total of 92 teams.
Here in this system you have total 164 teams so even if you just set MLS (36) and ULS Championship (64) as playable leagues your PC will need to process/compute 100 teams which already is more than 'four tiers' usually set as playable.

Database contains country/league rules for both England and Scotland, so remember to add/tick both files.

Database is based on my Quality Regens DB Update, so it works perfectly fine with Football Manager Transfer Update (FMTU) file.