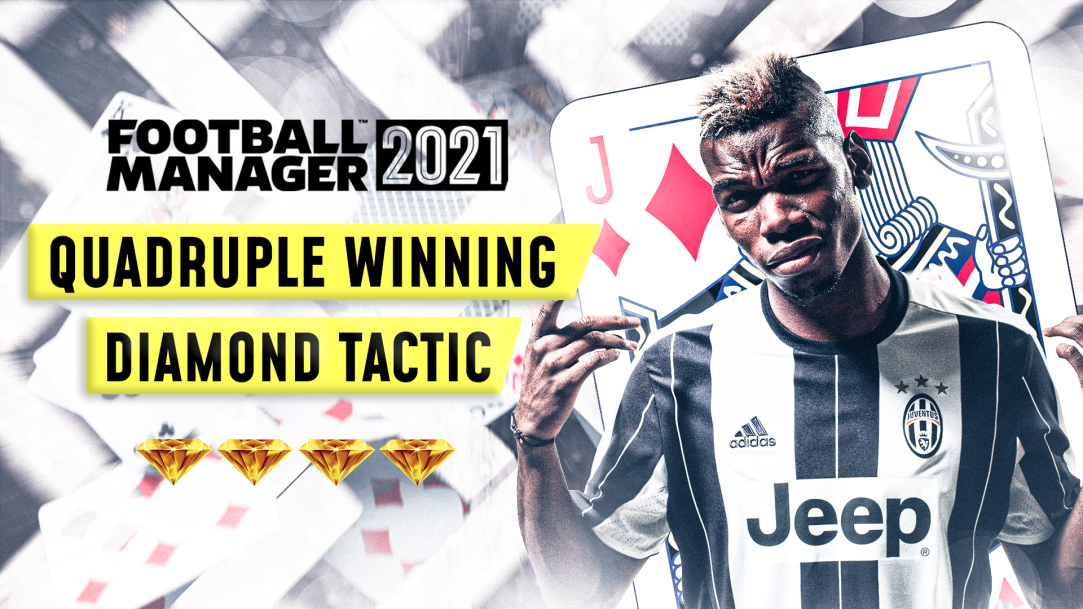 Big thank you to FM Scout for allowing me to share the tactic!

In this post we are going to break down and take a sneaky inside look at Gareth's newest creation, seeing if it matches up to previous tactics, and giving our prediction on what to expect from his latest rendition. 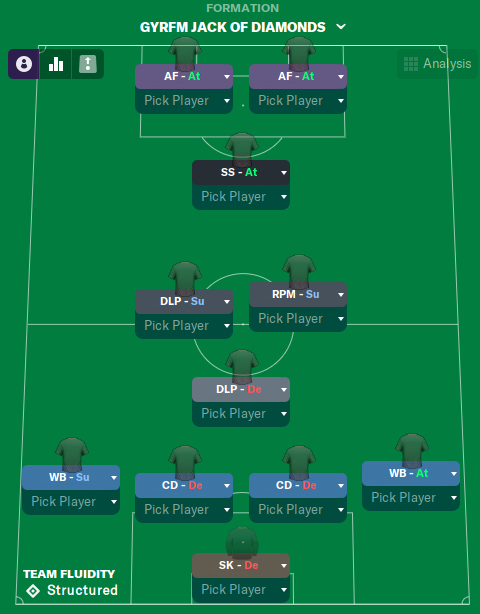 At first glance, we can see Gareth has opted for a fairly narrow approach. Keeping things tight and compact in the centre of the park. It's looking like that engine room in the middle, is going to be seeing a lot of the ball, with the midfield three all set as 'playmakers', DLPd. DLPs and RPMs respectively.
Looking toward the front three, we can see both strikers are set as ‘Advanced Forwards’, looking to stretch the play as often as they can, allowing the ‘Shadow Striker’ and players through the middle to make underlapping runs, getting numbers in the box.
Looking at the way Gareth has the roles distributed, combined with the shape that is on offer, you can soon see that the focal point of the side is that of the attacking midfielder, with the natural course of play being focused through the middle, due to the number of players in these positions, the 'Shadow Striker' is going to see an awful lot of the ball.

Sticking with going forward, both full-backs are set to 'Wing Backs', the only difference being is that the right-sided player is set to an 'Attacking' duty. This is to ultimately cover for the 'Roaming Playmaker' in the middle of the park who has the free roam to get on his toes and go for a wonder. Between the pair of them, they will naturally occupy the space which the other one has left behind, a bit of a give and go. And as the team is focused through the middle, the 'wing backs’ will naturally sit narrower, and cover in those middle areas when required.
This, with the added assurances of a ‘Deep-Lying Playmaker’ sitting defensively, and the classic ‘Central Defenders’ sitting at the back, it is going to be very hard for any side to get caught on the break when occupying these roles. And if all else fails, your last line of defence, a ‘Sweeper Keeper’ on defensive duties, keeping it calm and simple at the back. 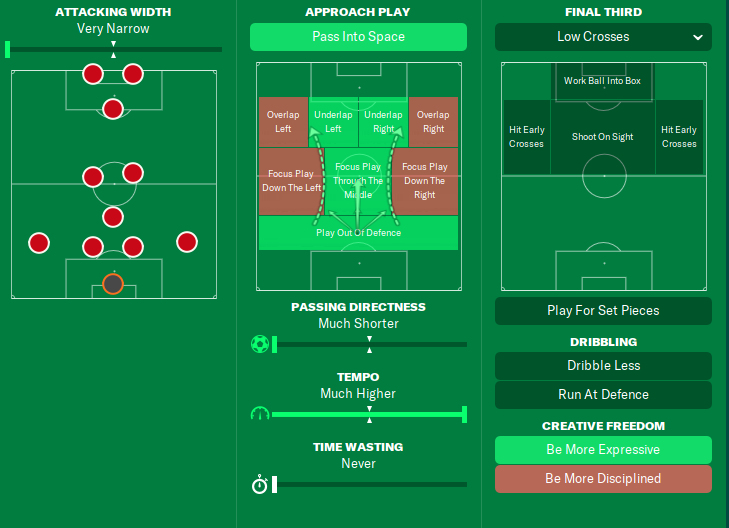 As seen when looking at the shape and formation, it was clear to see the width was that of a very narrow one, and that's exactly what Gareth has occupied here. Allowing all play to be focused through the middle, using those 'Advanced Forwards' to stretch the play, and open up any gaps for underlapping players to run into.
In the approach, this formation will have you playing out from the back, looking to get those playmakers on the ball as soon as possible. With the tempo set at a much higher pace, much shorter passing and pass into space enabled, you will definitely be seeing a lot of high-paced give-and goes on offer as well as seeing a lot of the ball.
With the number of creative players in the team, it is only necessary to see the side being more expressive in the final third. With low crosses on, Gareth certainly wants his team keeping the ball on the deck, and retaining possession as much as possible. 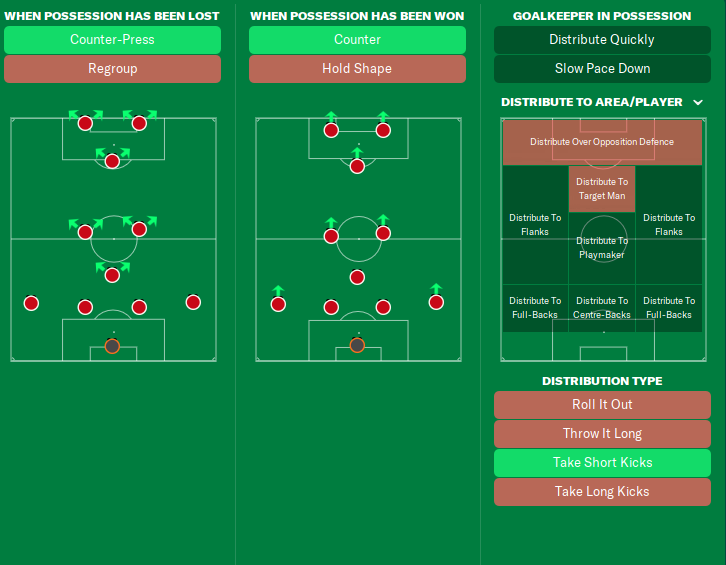 Any well-oiled team will be sure to have their transitions running like clockwork. In this system, Gareth has opted to retain possession at the first available opportunity, via means of a counter-press. Allowing the team to win the ball back as quickly as possible. This, multiplied by hitting teams on the counter once the ball has been retained, is a frightening thing for any defender. One thing you need to be wary of when using both of these options is ensuring your defensive, and supportive players maintain their structure and shape. Teams will look to exploit any gaps you have left behind when pressing from the front. But with the balance in this system, and the mentality set, Gareth has that covered. Transitions only work, if every cog plays its part, and that all starts from the back. Taking short kicks, allowing you to keep hold of the ball from the off, building from the back, and playing on your own terms
.
Out Of Possession 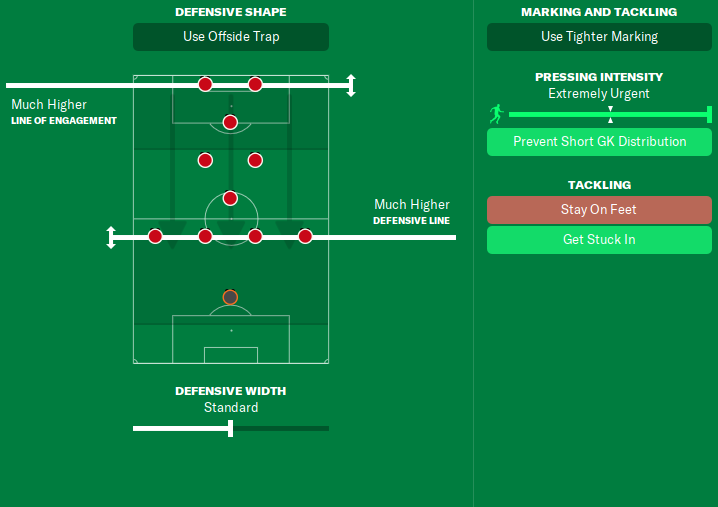 In this system, there is a 'much higher line of engagement', which allows your forward players to hit teams with relentless pressing from the front. Combined with a 'higher defensive line', it acts as a barrier to the first line of defence, sweeping up any loose balls that are turned over, and nullifying any opposition counter-attacks, when occupying an 'extremely urgent' pressing intensity.

This includes pressing the opposition Goal Keeper as quickly as possible, limiting his options and ability to play out from the back, in turn forcing him into a mistake, or to naturally kick it long, for you to retain, and play on your own terms.

As previously stated, looking at the player roles and shape, that Gareth has opted for the defenders to sit slightly narrower, being supported by the defensive ‘Deep-Lying Playmaker’ in front of them, keeping things tight at the back. This has been aided with the use of a 'standard' defensive line. Instructing his players to 'get stuck in', Gareth is taking nothing for granted when covering for such a relentless set of instructions.
On reflection, this system is certainly going to provide you with an expansive, and explosive front line, as well as a highly disciplined system, that provides you with adequate cover at the back.

Thanks for checking out the tactic

Follow me on Twitch https://www.twitch.tv/gyrfm to get involved in my Juventus save and more in the future

Look out for more tactics on FMSCOUT and message me if you have any questions or want to let me know how the tactic works for you!