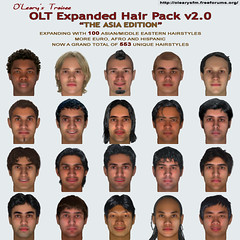 A note from the author: I always thought there were way too few hairstyles to offer any variety in NewGens in the game, and while I rectified most of that problem with Version 1 of my OLT Hairpack, I had completely ignored the asian/middle eastern NewGens. This updated version focuses on those - adding 99 new hairstyles for Asia/Middle East.

Now, a small word to explain a little something. When I started this, I was making them for "East India", after I had noticed there was a code to assign a hair to this region. My thought were that middle eastern type regens would use those instead of the Asian ones that they were currently using. It appears, however, that the Eastern India style is completely disabled in game, so I changed them all into Asia.

This is not perfect, as there are a number of distinctly different styles that should be used - but there is nothing I can do about that. So, this is the best solution to expand on those Japanese, Korean, Saudi, Egyptian and other Asian/Middle East regens for a better experience when playing the game around these parts of the world.

Only a select few added to the other categories - including my personal favorite "The Mohawk".

Newgens will never look the same once you install this!
You can't go wrong using this, guys!

DO NOT OVERWRITE THE EXISTING ORIGINAL FOLDERS or you will mess up your game.
In the facegen/hair folder, you should notice four folders already (afro, asian, euro & hispanic). These are the default hairs for the game. You should add the "olt hairpack" folder to those four in there so you don't write over the original hair styles. So DO NOT extract the "afro", "asian", "euro" & "hispanic" folders from within the "olt hairpack" folder directly into the "facegen/hair" folder. Extract the actual folder "olt hairpack" into this directory.

Have an older OLT Hairpack version?
If you have a previous version of the OLT Hairpack installed, I recommend deleting the "olt hairpack" folder before installing the new one (all old hairstyles will still be there).

New hairstyles will take effect immediately upon loading up the game.

This brilliant hairpack is created by O'Leary's Trainee from SI official forums. Remember to visit his site here.