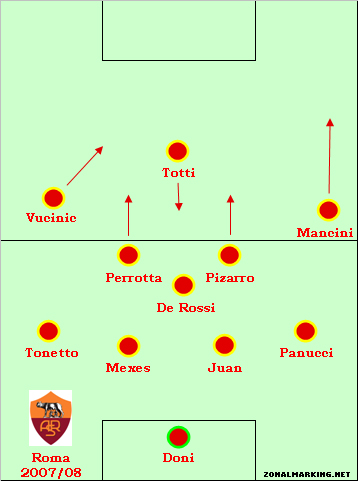 I will not post here the ordinary tactics .I will just show a modern way which became popular the last 4 years .

Its not just a theory ,its an applied idea which was very successful because of Luciano Spalletti .He used very good

training methods ,he combined ideally the talent of his players with his tactical intelligence and the result was...

Brilliant football ,excellent combinations ,balance between lines and gradual improvement in all the levels ,

season by season .Ofcourse ,there is one factor which is crucial .Age .Every person is becoming older or to say better

more mature but football needs in many cases fresh legs .As totti and other players start to decline because of their

age ,this formation became less popular from Lucio .However ,moving to Russia and having again in his disposal

very good athletes ,he built last season a new masterpiece .Danny ,Bystrov in the wings ,Kerzhakov back in form ,

He is trying now to introduce zonal marking in every single aspect of the game.Even in the free kicks or corner kicks ,

whole team should be synchronized in order to play the offside trap .This formation supports every kind of

mentality and especially fast passing game and attacking pressing .Its based on the principals of total football simply

symmetry between the lines .Download it ,make your experiments and why not ,create your own pattern ,you own

template .Its the ideal platform if you want to make experiments and to see in which direction will the tactics

develop .Less theory now . See it in action .My feeling is that many results will surprise you .Its a matter of time .