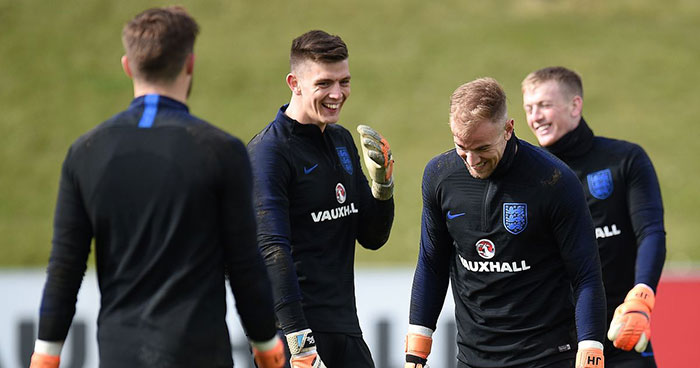 Gareth Southgate chose four goalkeepers in his recent squad for the Netherlands and Italy. In just a few weeks time, he won’t have that luxury.

It’s time for business and he’ll have to whittle that down to three and ultimately one for that opening game against Tunisia on June 14.

Southgate will be keen to nail down a permanent number one, after the failings of using two goalkeepers in previous tournaments. He’ll be casting his eye very carefully over the remainder of the season as Jack Butland, Jordan Pickford, Joe Hart and Nick Pope go head-to-head.

The recent friendlies suggest that the spot will be given to either Pickford or Butland, both getting 90 minutes under their belt across the week.

With around a month before the Three Lions manager names his squad, we take a look at the cases of each stopper…

Most online betting sites have Pickford slightly edging out Butland to take the gloves.

The Everton man has proved he’s a fantastic shot stopper and his distribution is something that fits right in with Southgate’s style of play.

He’s inexperienced at international level and will be brand new to major tournaments. Southgate is putting his faith in plenty of young players though, and Pickford could be one of them.

It’s more or less a 50/50 split with the fans on who should take the number one spot between Pickford and the Stoke keeper. Plenty are opting for Butland, who has been to a tournament before and has much more Premier League experience.

Despite this, he only has a handful of caps to his name and Stoke’s form will be a cause for concern, particularly as much of the squad will be going into the tournament on the back of stellar seasons.

It’s been a torrid couple of years for Joe Hart and it’s now likely the 30-year-old will have to relinquish his crown as England number one.

It’s possible he may not make the squad at all, though England do lack experience and if Southgate wants to to take some with him Hart will be a useful addition.

He had a good game against Chelsea recently so his hopes of being named in the starting eleven aren’t completely dashed if he can use that as a catalyst, but it’s looking increasingly slim.

Nick Pope has yet to be capped by England and will be challenging Joe Hart to take that final goalkeeping spot.

He’s been brilliant all season for Burnley and is now keeping Tom Heaton out of the side, following his return from injury.

Heaton would have been challenging for a spot in the 23-man-squad if it wasn’t for that horrific injury, but Pope has taken his chance with both hands and potential deserves a place in the starting eleven, never mind the squad.