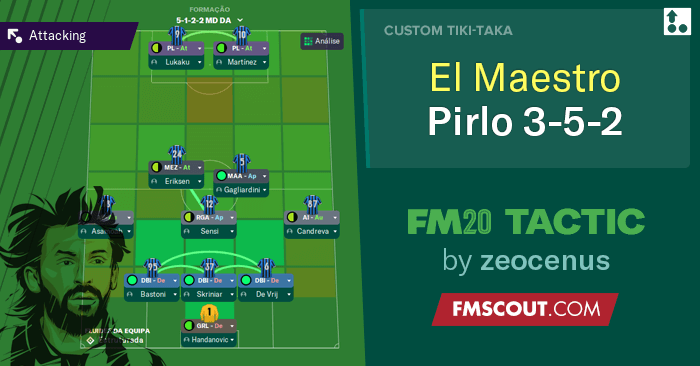 So... I created this FM20 tactic and used it on my personal save with Man Utd but then I thought maybe it works because of my good players. So I tried it on Bayern Munich and Inter Milan and I simulated 1 season.

Unfortunately I cant show you how it went on Munich, but we reached semi finals of the Cup, Euro Cup and won the League by 15 points, Thiago was the Regista and had a 7.88 average rating in the first season, sadly it didn't work better because there were few players to rotate the team and Thiago had many injuries, so I tried on Inter Milan with Sensi as the Regista and here's the result.

As you can see, without any concerns about the rotation of the squad or training or players form, it went pretty well... many goals, many assists, many players doing key passes, and most of all everything built around the Regista!

This tactic is used in teams where you have a pretty quick, hard work team but with intelligence and technique, THE PLAYERS THAT YOU NEED FOR THIS TO RESULT ARE:

Forwards: both quick but 1 with more capacity of scoring playing on the left and the other can even be a winger with less finishing adapting to play on the right.

Midfield: wings athletic w good crossing, pace and work rate / Mezzala will be a creative player capable of dribbling and also score a few goals / BBM will be someone as Vidal which means an all around medium / good player as Barella for example.

Defenders: they need to be quick so at least 13 acceleration and pace.

REGISTA: doesn't need to be physically good, just need a little bit of Balance, and extraordinary Mentals and Technicals, doesn't need aggression nor bravery nor finishing, just someone like Thiago, or De Jong, or even Kroos, they will be the ones to launch the majority of longs balls for counter attack. BUT you need to make them learn 4 PPM's: (1) play long balls (2) change flanks (3) stay back (4) try killer balls.

Hope you enjoy, you will have much fun watching your team playing with this one!