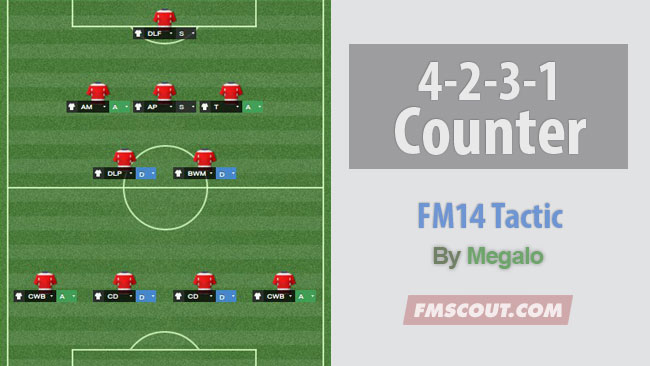 I wanted to create a counter formation that was attractive, it's almost attacking really. You won't get many clean sheets but you will score goals, maybe you'll get those cleans sheets that eluded me if you try this tactic with a big team. I find the midfield moves the ball around well and the CWB provide a natural width and are vital in many attacks. So you'll often see you two centre backs all alone in their half when your team attacks, like I said this formation is counter but really its based around fast, short passing attacks, getting as many men forward as possible, while hassling the opposition when you don't have the ball.

GK - someone solid, doesn't need to be good on the ball or at passing.

CWB/L/R - Will mostly attack and need great stamina. Decent crossing and shooting will help in the final third.

CB - Strong, good in the air, 6ft or over, half decent pace as they will be left to cover the CWB often.

BWM - The anchor in the midfield, will sit back mostly so pure defensive attributes and decent passing needed.

DLP - Will both defend and link up with attack. Good creativity and passing, but also needs decent defending attributes.

AMC - All need to be good creative players. The middle of the three will sit back more and tend to be the main creative outlet. The two outer midfielders will get into more scoring positions so need to be good finishers.

DLF - The striker will support the midfield, dropping back and allowing the two attacking mids to run past him. So a mix of finishing and creative attributes will be needed. In the first season El Arabi scored 18 league goals, but in his second season he only managed 6 (due to injury and the African Cup of Nations) so I loaned Robinho who managed 8 in 19 games.

During my 5th season I finally ended my trophy draught when I took the Champions League back to little Granada!

This formation is the best I have ever created, it's so consistent as 5 consecutive top 3 finishes with Granada suggests. My most recent season saw me come as close as I've been to the title, finishing on joint point with Barcelona, but this season would not be yet another without silverware. Finally I did it, I won a trophy and what a trophy it was, the Champions League, unbelievable, tight 0-0 draw ended with an epic penalty shoot out win for my Granada boys.

Why not give this formation a go, perhaps with a bigger and better side or maybe even try it in non-league and let me know how you get on, good luck fellow FMers

25 comments have been posted so far.