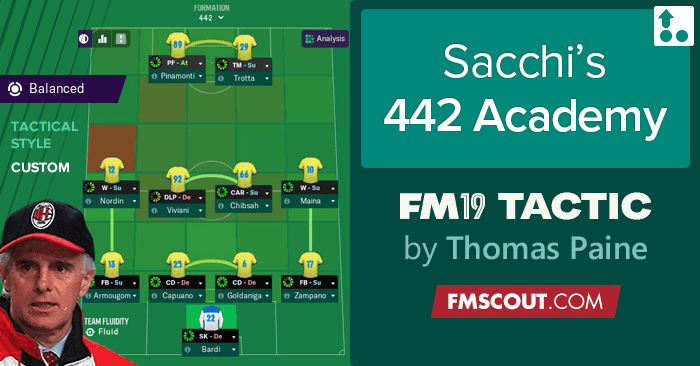 Who doesn’t love a good and versatile 4-4-2 tactic for Football Manager?

There a lot of 4-5-1 and 4-2-3-1 tactics around but there’s not enough love for the old 4-4-2, what I’m going to describe here it’s not a plug & play tactic, but something better, a solid framework for many tactical variations to suit different scenarios.

I had that famous Sacchi’s Milan 4-4-2 tactic in mind while developing this one, to be fair it won’t be a replica of it, but many concepts used by the tactician from Fusignano influenced me.

Pressing is not about running and hard work, it’s about controlling the space
-A.Sacchi


From Sacchi’s point of view the opponent team confidence is broken by disrupting their usual way of playing, to obtain such a result the team should work like a unit where every player needs to participate to pressing tactics.

I’m sure you all know what 4-4-2 weak point is nowadays, you’re often outnumbered in central midfield, the only way to fix this issue is to stay compact, if all the players work together you could minimize this issue.

Ideally, you should always have five players beyond the line of the ball while attacking
-A. Sacchi I’m quite satisfied with the overall balance reached with this tactic, playing narrow and adopting a high defensive line help us to stay compact and improve our passing and possession percentage. I didn’t use any OI’s in this tactic, regarding the rest have a read below.

Keeper: playing always with a high defensive line a sweeper keeper looks like an obvious choice, I could try to be more expansive for the future and change from defend to support.

Wingers: the creative forces of my attack, they run with the ball from deep positions and are a constant threat for the opponents.

Midfielders: the DLP-carrillero partnership could look a bit odd and too conservative, but I really needed players who could stay in the middle of the pitch without going forward too much, they’re set to play a more direct passing game, this way they’re more prone to look for a striker instead of moving too often the ball to my flankers.

Strikers: a target man and a pressing forward, two hard-working men that served the squad well, Pinamonti and Trotta scored respectively 10 and 11 goals this year.