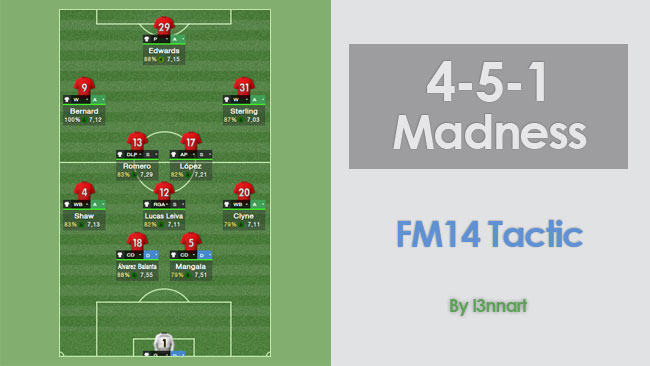 Football is about scoring more goals than the opposition!

I've always been dazzled by fast paced, fluid, attacking football. Watching Bayern and Dortmund last year was just amazing with thier fantastic style of play and hopefully the end of Barcelonas trending slow build up way of approaching the game.

This tactic builds upon free flowing direct attacking football and putting immense pressure on the opposition once the ball is lost. I can't promise a rain of silverware just from using it, but it has brought me success and I feel someone else might share my love for this type of football and will want to give it a go.


In game
In game I don't change much. If I'm up by a few or the game just isn't going in a direction I change mentality from 'Overload' to 'Counter'. If a revice a red card I put one of the wingers up front to form a front two with the starting striker and move the other one to what ever position the ejected player had.

Skills/Positions
I bulid my squad around physique and technique. Especially the defenders, who often will find lots of space behind them, will depend heavily on their ability to get back before the opposition.

GK - Nothing special to say, someone who keeps the ball out of the net. Distrubution of the ball might be worth looking at as the high defensive line risks counters with bad goalkicks and such.

CBs - Like I said, speed! I use physical monsters like Balanta and Mangala and they have top avg.rating in the league.

WBs - Needs to be proficient in defense, but they push up alot along the flanks. Speed and crossing are a must, being able to handle the ball is a big plus as well.

MC - The main jobs for the middlemen is to provide the players pouring forward with throughballs and helping the regista to win back possession when lost. Once again hard work and passing play is vital. Will also provide goals if they have decent long shots/finishing.

Ws - Pace and skill are the main factors. Beating your man and moving into the final third either for finishing, crossing or passing it on. Will get into alot of scoring opportunities, so being able to apply the finish is a big plus.

Striker - A poacher, once again it's much up to taste, but it seems as if targetabilities do help alot, especially for the quick counters after winning the ball and goalkicks.