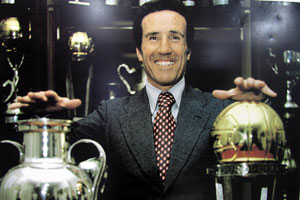 Angelo Moratti is a wealthy Italian buisnessman, maybe the richest and he controls Internazionale. He is about to spend a fortune, but the results didn't come. Juve and Milan are dominating in the Italian Football scene and nobody gives Inter a hope. Moratti is desperate and according to the journalist Gianni Brera he even thought to disappear and commit suicide "Gianni, my life is fed up of watching the victories of Milan and Juve, I want to put an end". Everybody was shocked "Moratti lascia l'Inter" were the rumours of the press. Moratti leaves Inter. Ubelievable failure, for the richest tycoon in the country.

That season a promising French-Argentinian coach named Helenio Herrera was shining in Spain. He earned a reputation as "El Mago", "El Maestro", "El Transformario" - Wizard, Master, Transformer he made miraculous work in all the clubs that he trained despite having the modest players and the clubs' restrictions. Back then you couldn't make online scouting or unlimited transfers, you couldn't find databases with players and especially the last one was the advantage of Herrera. He has make a secret network of people who were informing him about everything in European football. Even now, this detail remains his best hidden secret. The rumours say that he had installed 4 ex-footballers in France and Spain and they were working as journalists or coaches so all the technical details were coming directly to his ears. Of course he has paid them, as well as his network in Buenos Aires -they followed the same pattern- so Herrera was always ahead in the news.

In July of 1960 Moratti made his last effort to revive Inter. He traveled secretly in Madrid, masqueraded and he started immediately conversations with Herrera. Helenio wasn't interested so much about Inter!! He claimed that Spain is his second home and that Inter will never wake up. Angelo Moratti ordered the hotel administration to lock the doors everywhere around the building "for confidential reasons". Herrera acted aggressively and he wanted to call the police, he started to shout calling the workers dirty bastards. He stood up and he raised up his finger. Immediately the bodyguards of Moratti, sat him down again. Then, Inter history changed forever. Angelo Moratti, offered him a check which made him the most expensive coach in football history, 4 times more expensive than the 2nd well paid coach. Herrera refused, Moratti replied "no way, you have one hour to go to your room and then to write me the amount that you want, the deal will be done". Herrera after half an hour came down with a huge smile. Moratti saw the paper, he shook his head sadly and he said ok then, let's see that how is going to work. The contract was for 2 years and his payment was 5 times higher than the previous offer. Herrera made his fortune, Inter as well.

These info are from the autobiography of Gianni Brera who made the connection between Moratti and Herrera. Brera gained a home in Milano for that deal. Don't ask who paid for that. The same story or similar happened with the son of Angelo, Massimo when he approached Mourinho. The ending was the same. At least Herrera stayed 8 years in helm of Inter, special Charlatane will change even his wife in some years, maybe he has done it already, I don't swear.

The first man who systematized 5-3-2 in his modern version was Nereo Rocco, arch rival of Herrera. Helenio couldn't cope with Milan and he admitted that such teams need poison in the head. Herrera took immediately the decision to form a tough group with fast players, fast counters attack but precise passing game. He loved fast football no matter the defensive schemes, "speed is making headache to the opponents" used to say. He had initially 5 players in the deep - 5 in a line - another 4 in a line and one striker. But he saw that 4 in the line cause him upset in midfield, too many gaps. So he made the 4 midfielders tighter in a restricted zone of 35 meters in the width. Faccheti, his left full back, took over the whole defensive duty. The midfielders were covering the full backs only in the defensive duties. In attack, every player had to express his versatility. The second revolutionary action was the mixed marking system. 5 in a line cannot play man-to-man. So only the two stoppers were playing man-to-man marking. Armado Picchi was the libero, sweeper and whole team including the striker were moving together like a chain - catena - Catenaccio. Catenaccio means chained football, nothing more, nothing less. Its meaning is positive because it means systematic approach and cohesion -tough like chain-approach.

But when you are jealous and un-educated you underestimate everything that you don't like.

Back then, it was a myth which exists even today. "When you play defensively you are fascist, when you play attacking you are left progressive, when you play somewhere in the middle you are central politically orientated".

I definitely call it "Bullshit of the Century".

In this two images Jair is moving as a winger but be careful, because both backs were starting their runs from the deep. Don't associate the attacking runs with the set up of formation. The attacking runs show the dynamism of the tactic while the defensive coverage shows tactic's flexibility and efficiency. Like the punch, it has to be compact and firm to beat. 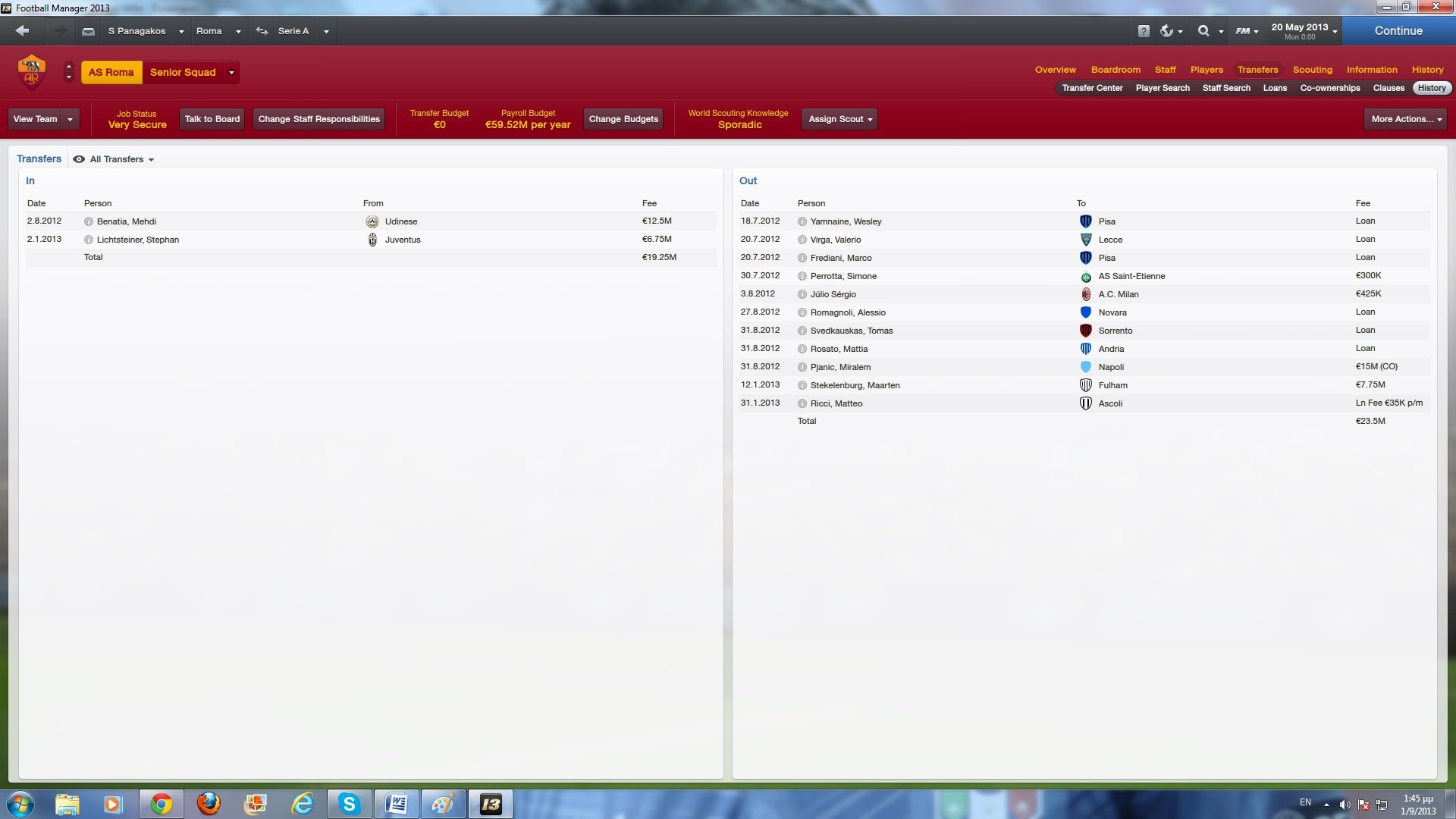 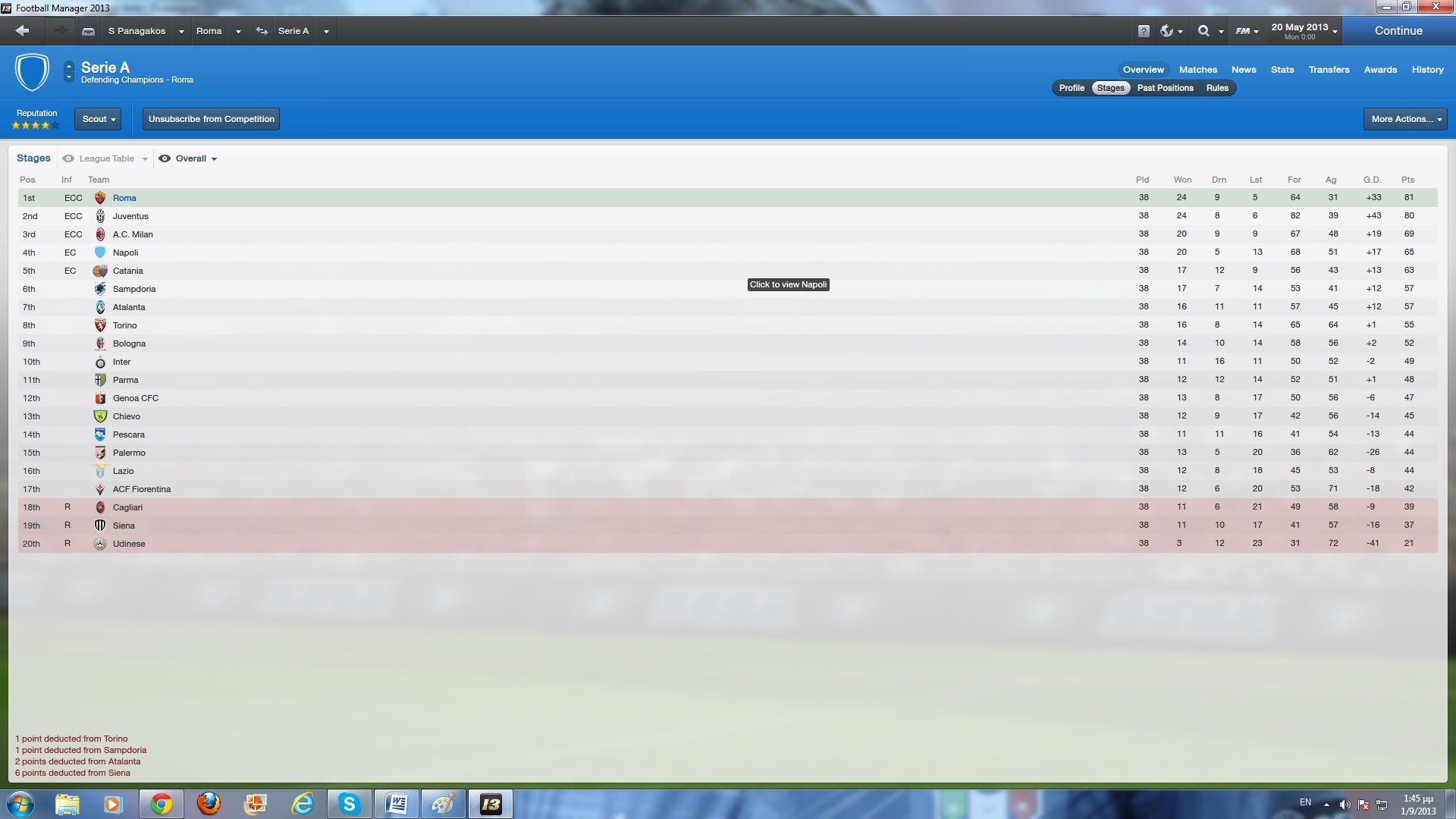 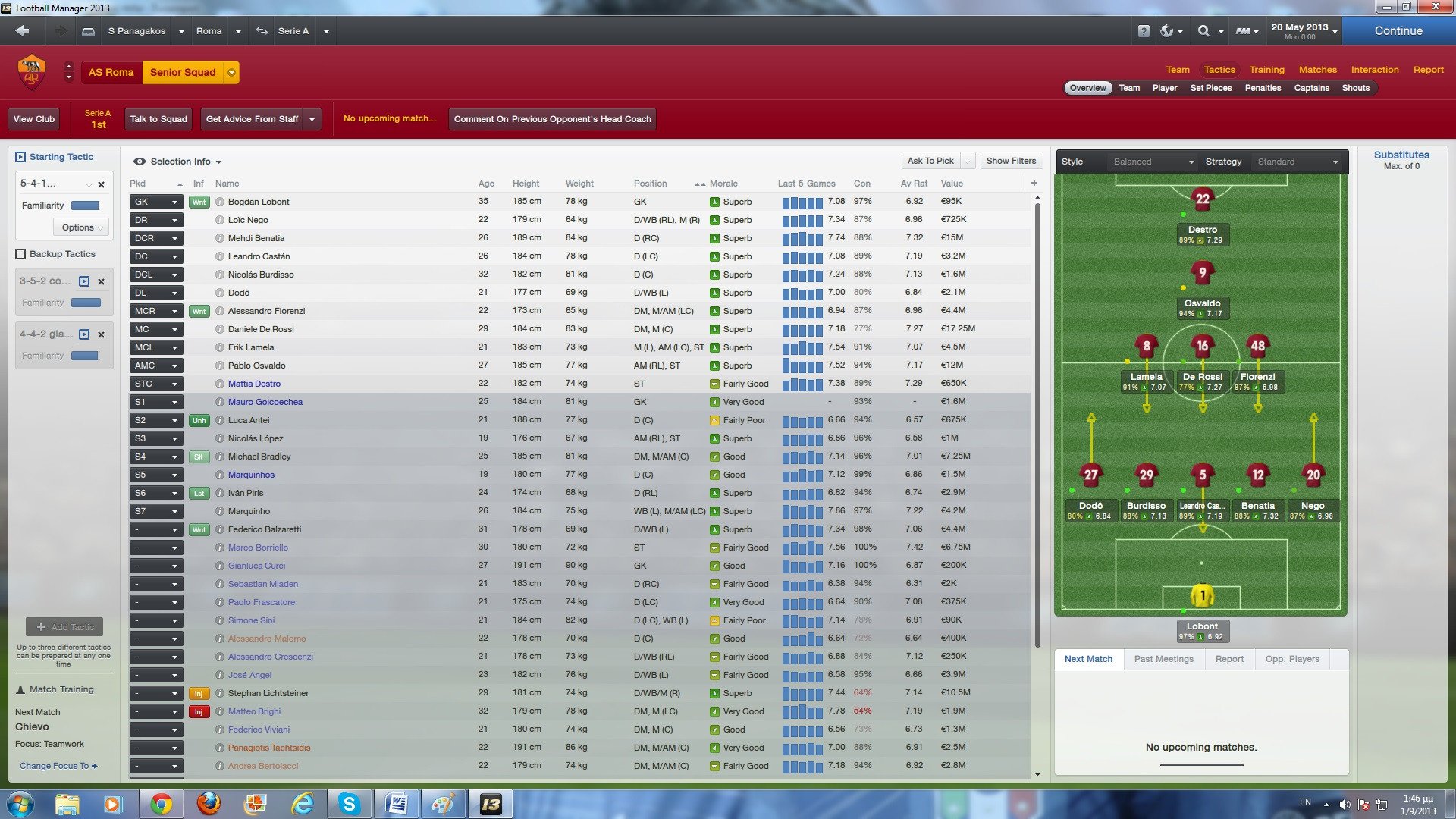 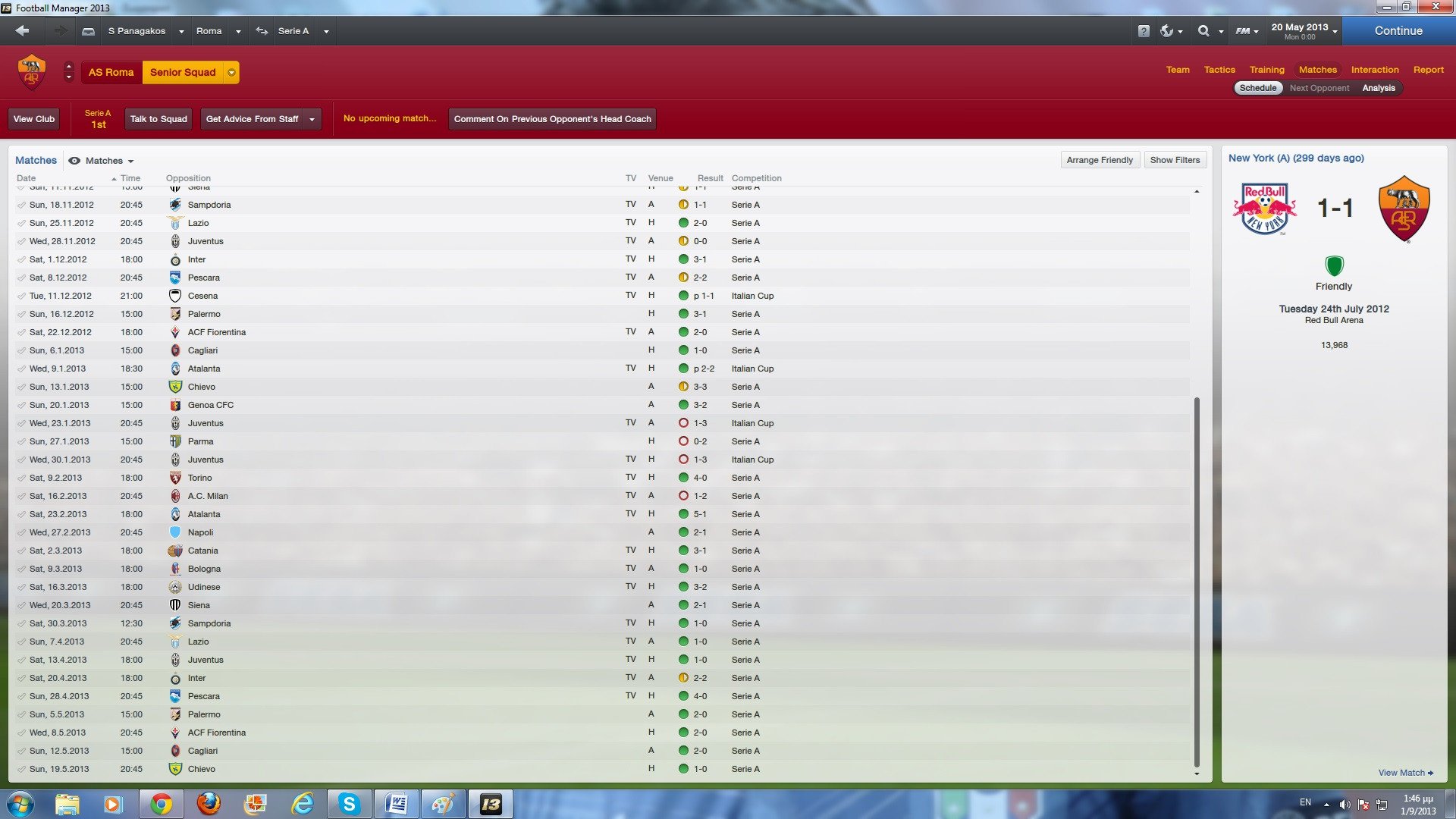 In my first season in Roma I won the league, see my transfers, see my results and pay attention that after January /February I adopted this formation. Before that, I wrongly thought that 4-1-3-2 and 4-3-3 can work. Pay attention to my moves in the transfer market.

Now we pass to the most intriguing example. West Ham United. Recently relegated from Premier, 7 points in 12 games and a second relegation in a row was viable. I took over in October, the team had won 2/12 matches.

In the 4th image I modified the formation but not the basic tactic. I didn't make any defeats using 5-4-1 and the 7 defeats were a product of the previous manager. In the second season I was voted "Manager of the Year" in Premier and West Ham finished 8th by conceding only 35 goals.