JasonRM
6 years
Great Start Aaron, I'll be following for sure. I hope Mario Gomez preforms for you! 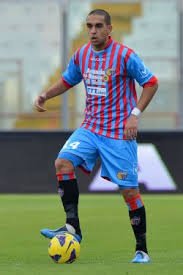 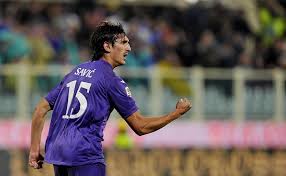 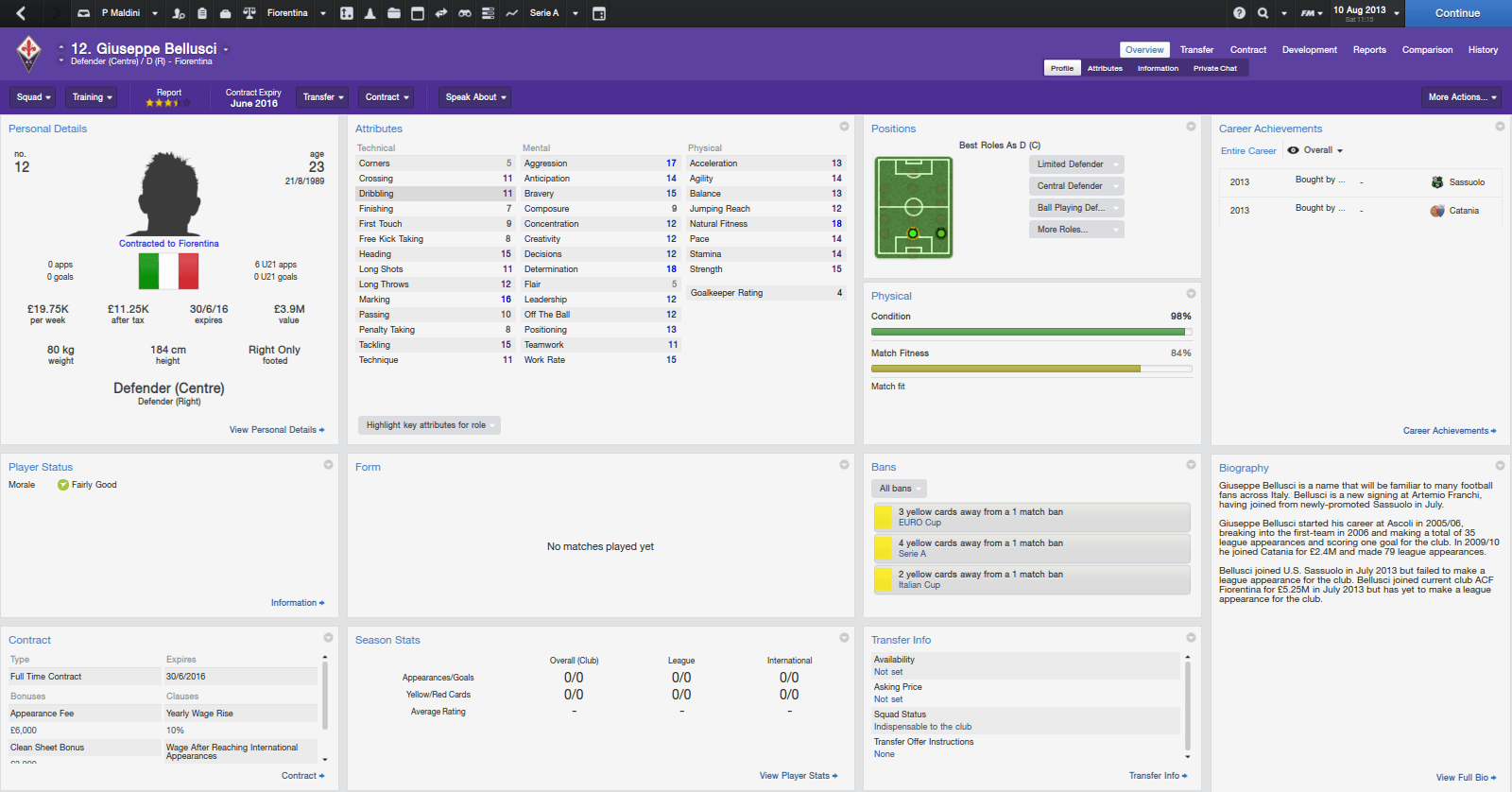 Today, Paolo Maldini made his first official signing for Fiorentina, bringing in Guiseppe Bellusci at an undisclosed fee. He did reveal that this signing wouldn't have been possible had Stefan Savic not left the club for Benfica, a fee of £4.700.000 was payed for the player. Maldini also revealed why Savic left in the first place.

"It got to the point where we just couldnt keep Stefan at the club anymore, he became unsettled due to interest from Napoli and Milan. We discussed the situation together like gentlemen but at the end of it all there was only one gentleman and it wasn't him, he acted very unprofessional and this was the reason I let him go, I do not want unhappy players at my club.

Fans did seem slightly dissapointed with the decision to let go of Savic, but they did think that the fee justified his ability and that the signing of Bellusci was very good buisness on Maldini's behalf.

@FiorentinaTID: @FiorentinaOfficial I thought savic was a great player but if he is unhappy, then there is no choice ut to sell him, I think Bellusci is a great replacement and cant wait to see him pull on that famous purple shirt #GoodTimesAroundTheCorner #HaveFaith

This was juast one of the many tweets sent to Fiorentina's official twitter page. We hope to see some more signings and dealings from Maldini and cant wait for them. stay tuned.
Login to Quote

LFC
6 years
Bellusci was great for me in FM13, hope he is for you.
Login to Quote

Aaron
6 years
cheers LFC, i know everyone signs him up and i only did because he was the only great young italian defender i knew lol, i hope he does well too:P
Login to Quote


New Viola's manager Poalo Maldini has shocked all of Fiorentina, by terminating every last one of the senior backroom staff's conracts, not only has he done this, but he has seem to have assembled what people are calling the best backroom staff for atleast a decade or two.

His first addition to the team was Rosario Argento, who will come in from Palermo and have the responsibilties of a 'Head of youth development'
Next in, was David court, from Arsenal and its expected he will become one of two defensive coaches.
Third in was Bruno demichelis, an assistant manager who was a 'Free agent' if you like, he should do the job of every assistant manager and help coach the team tactics Maldini implements.
We wont name them all, but we will list them all with a rough idea of all of their 'attributes' 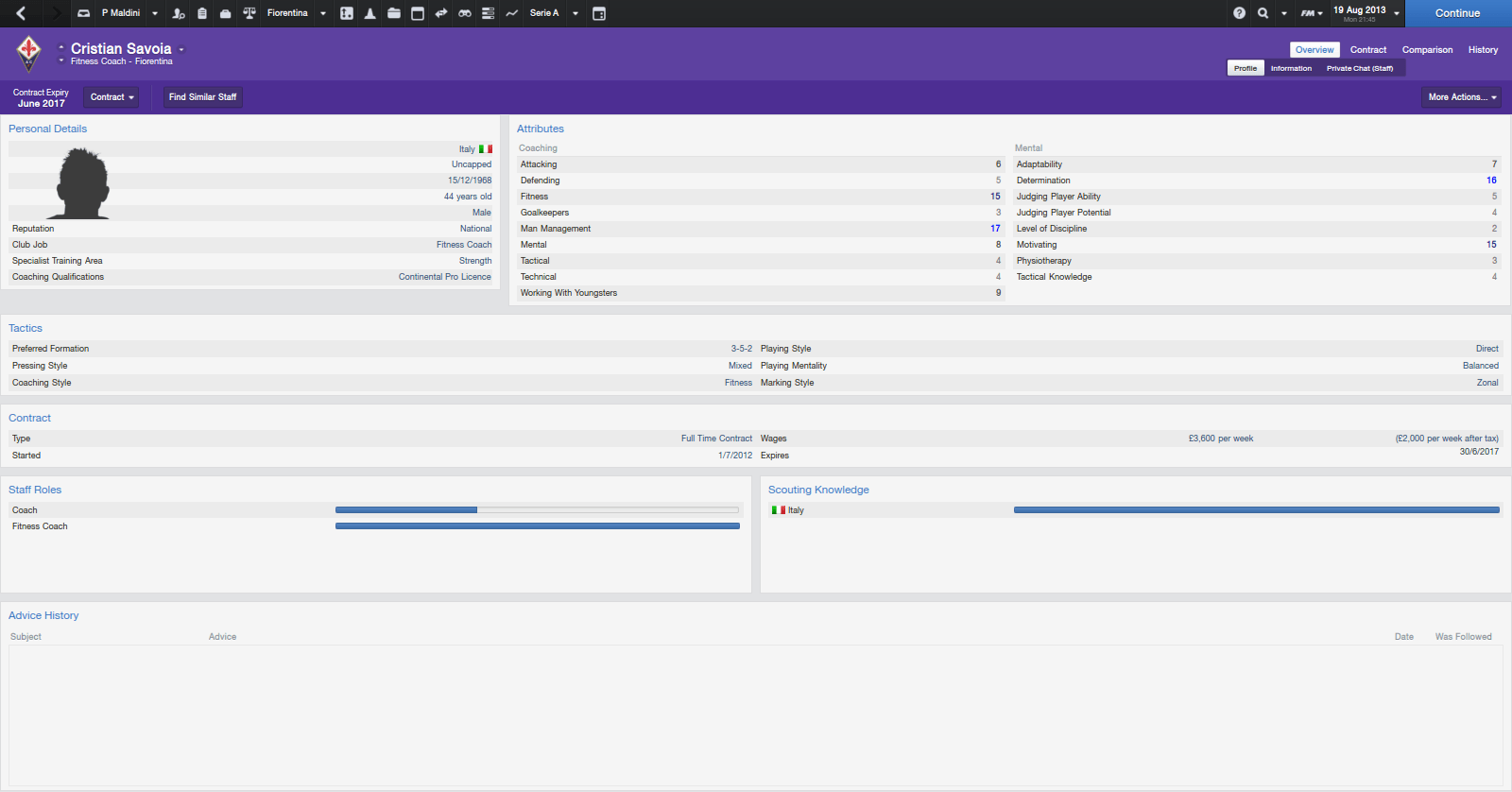 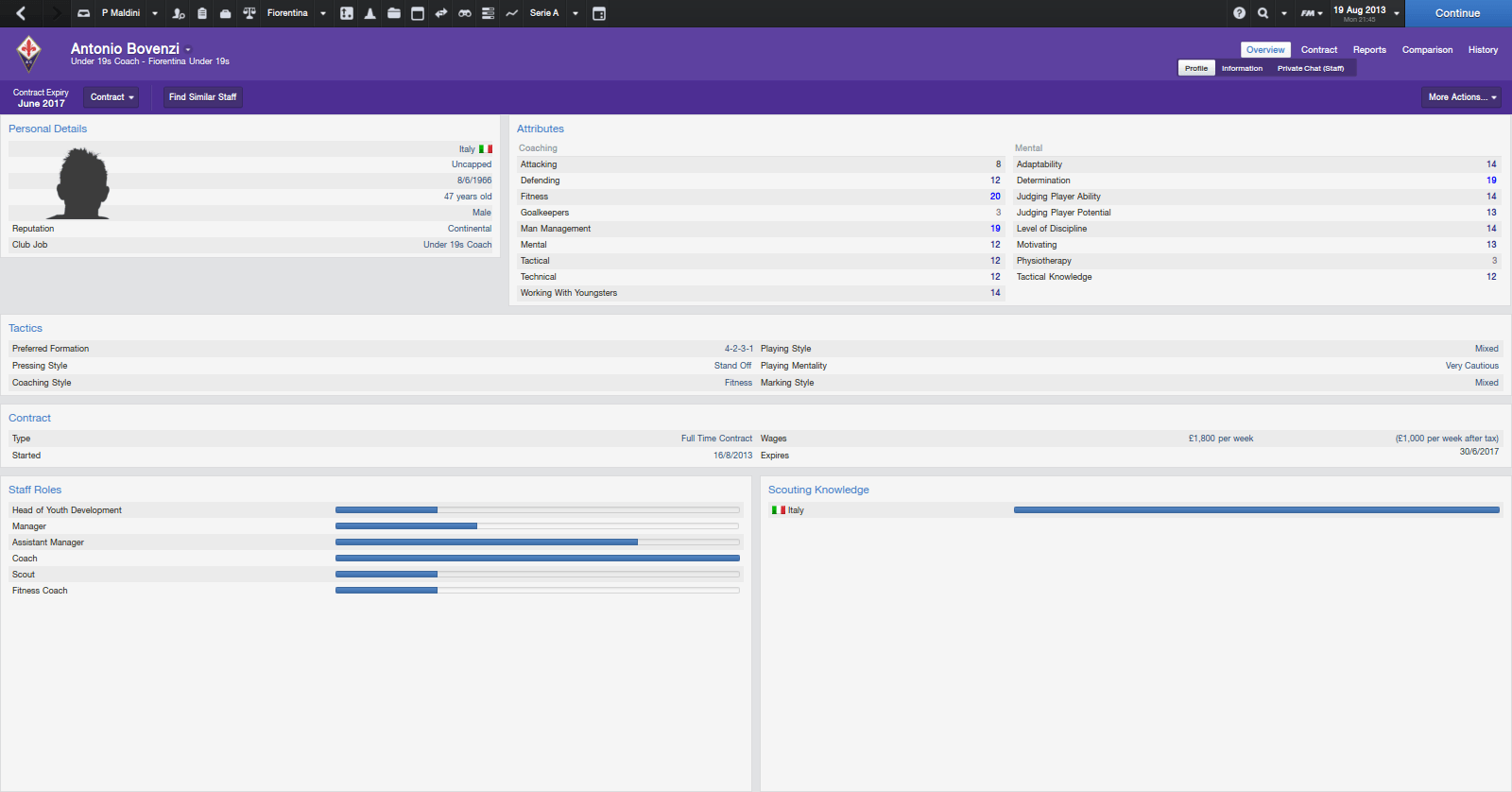 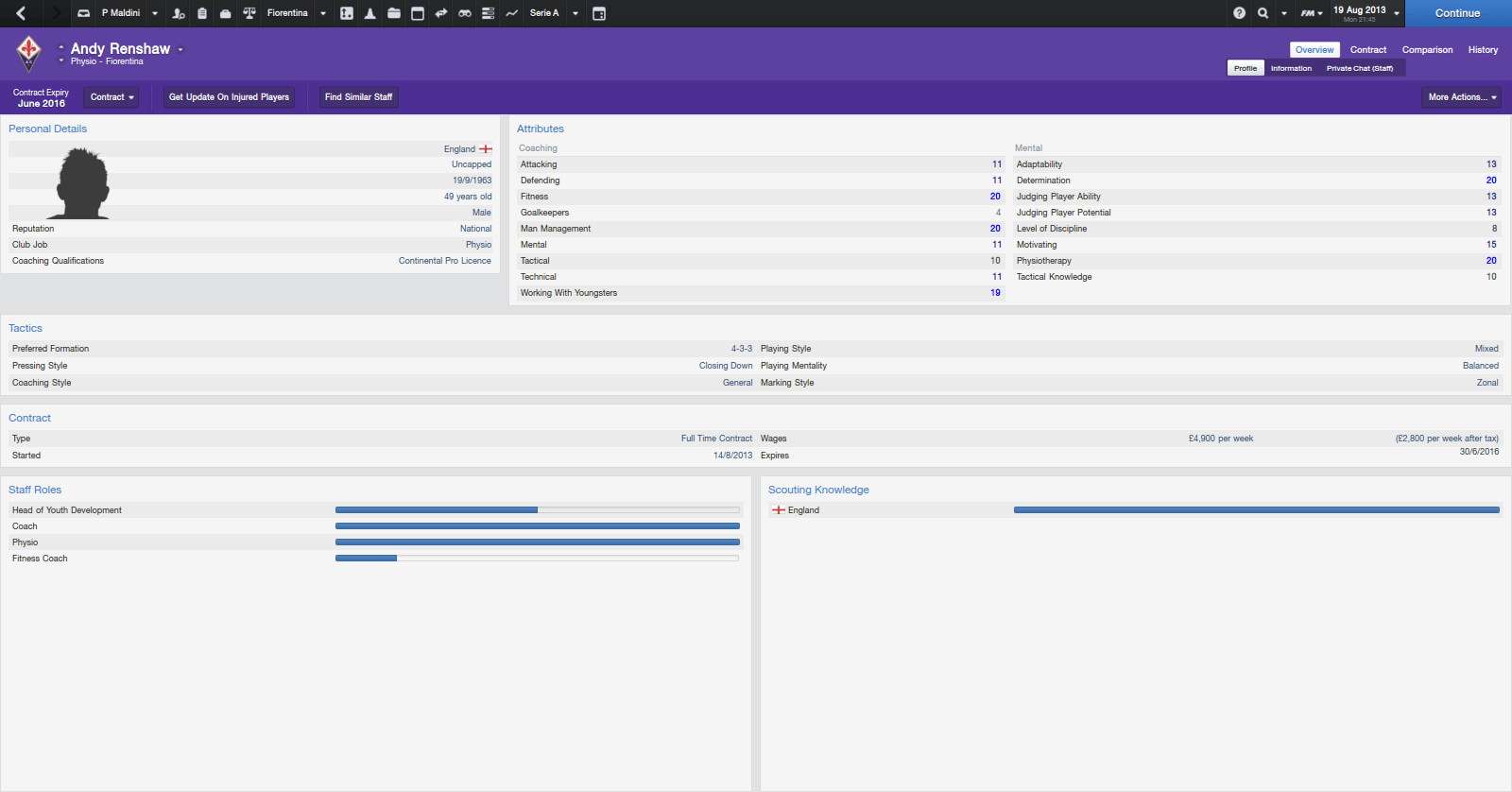 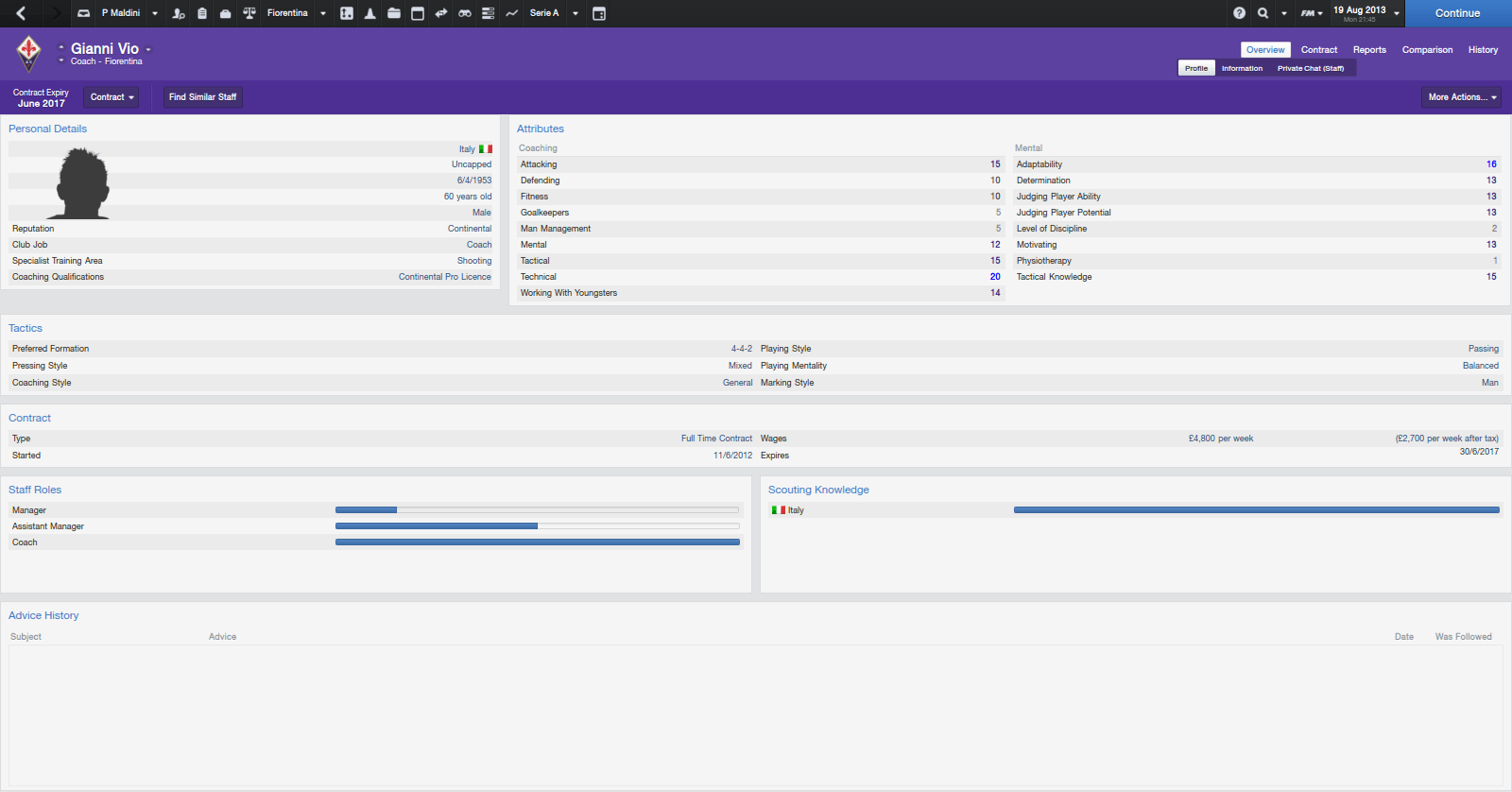 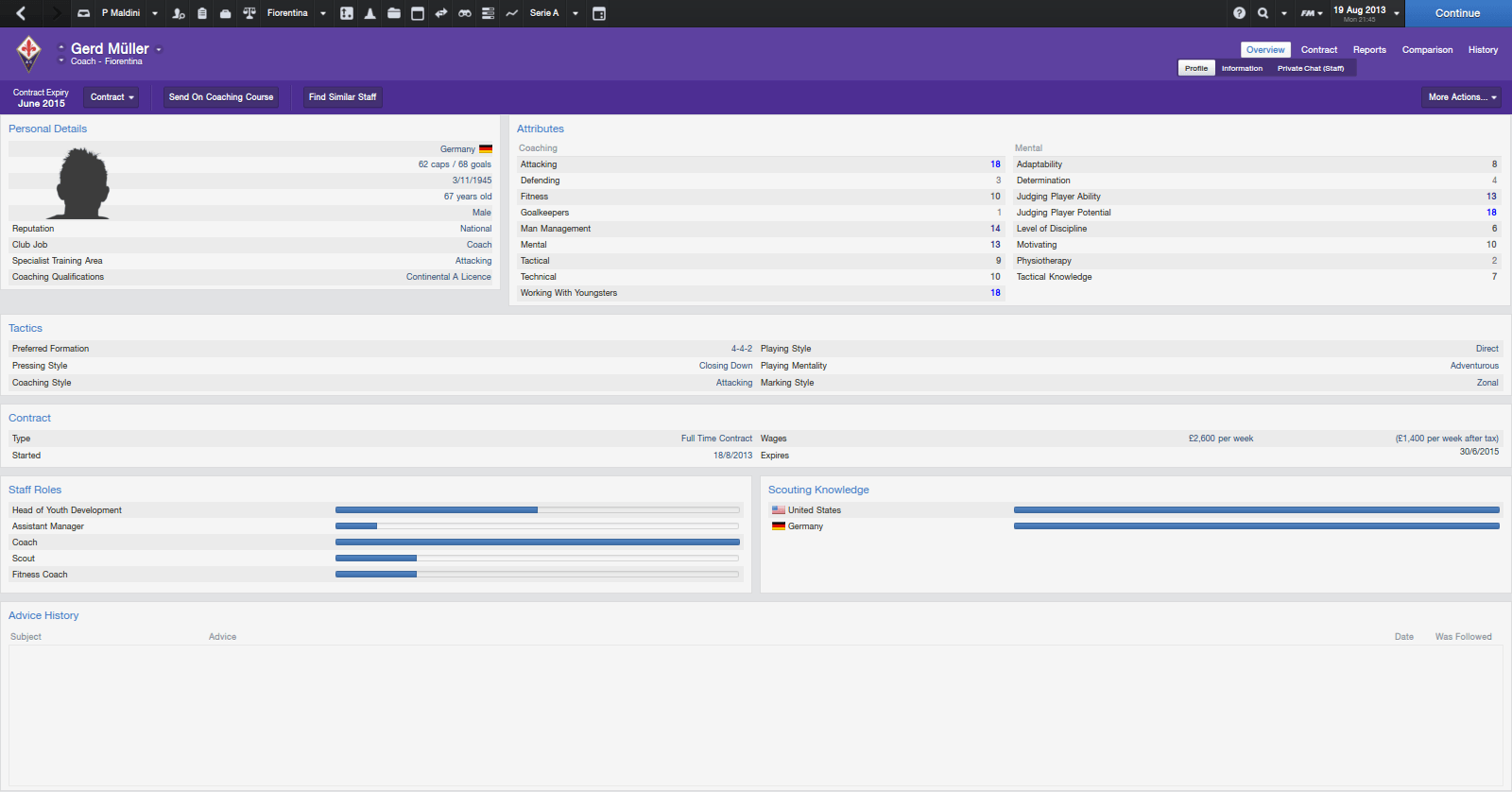 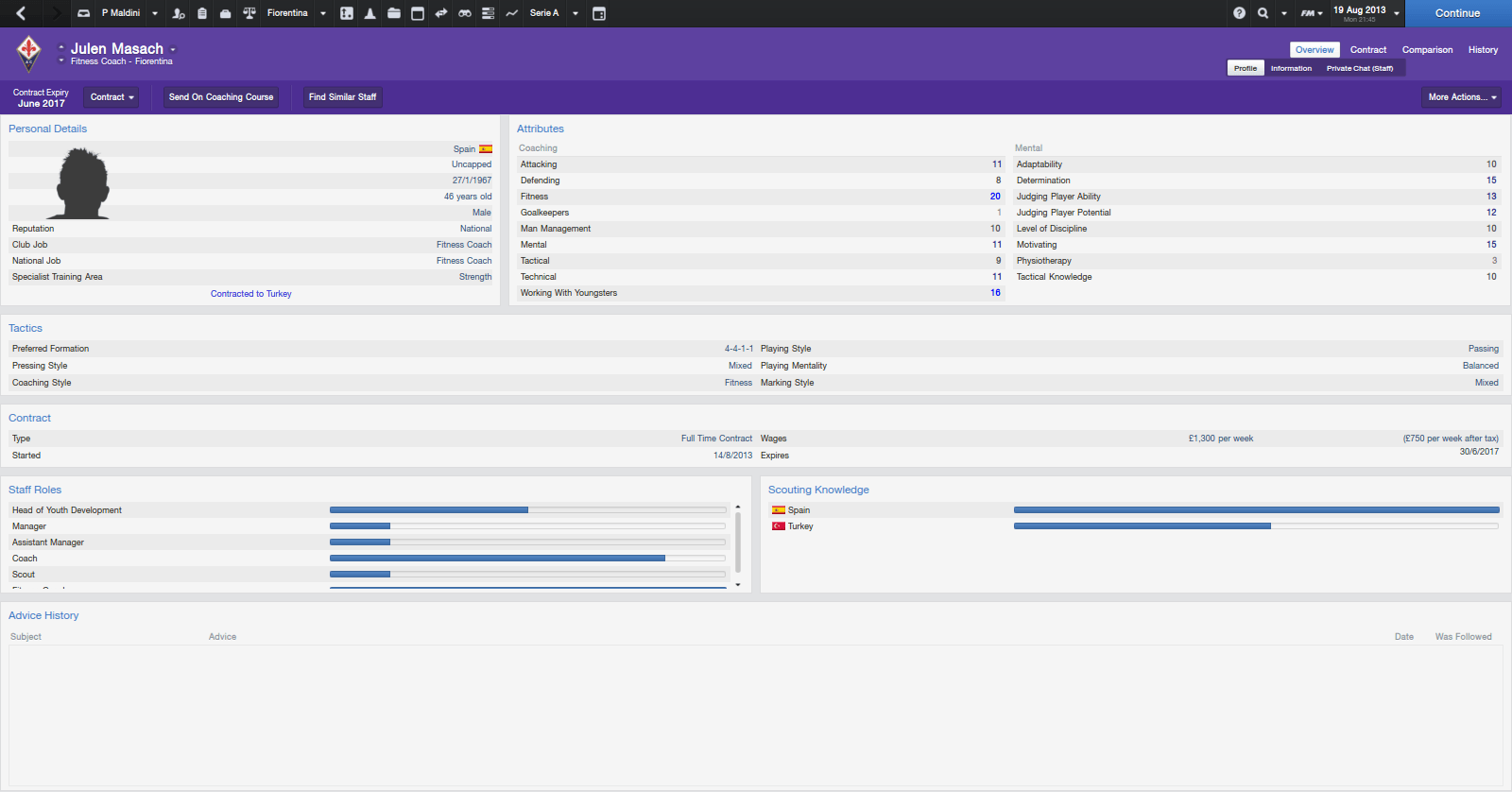 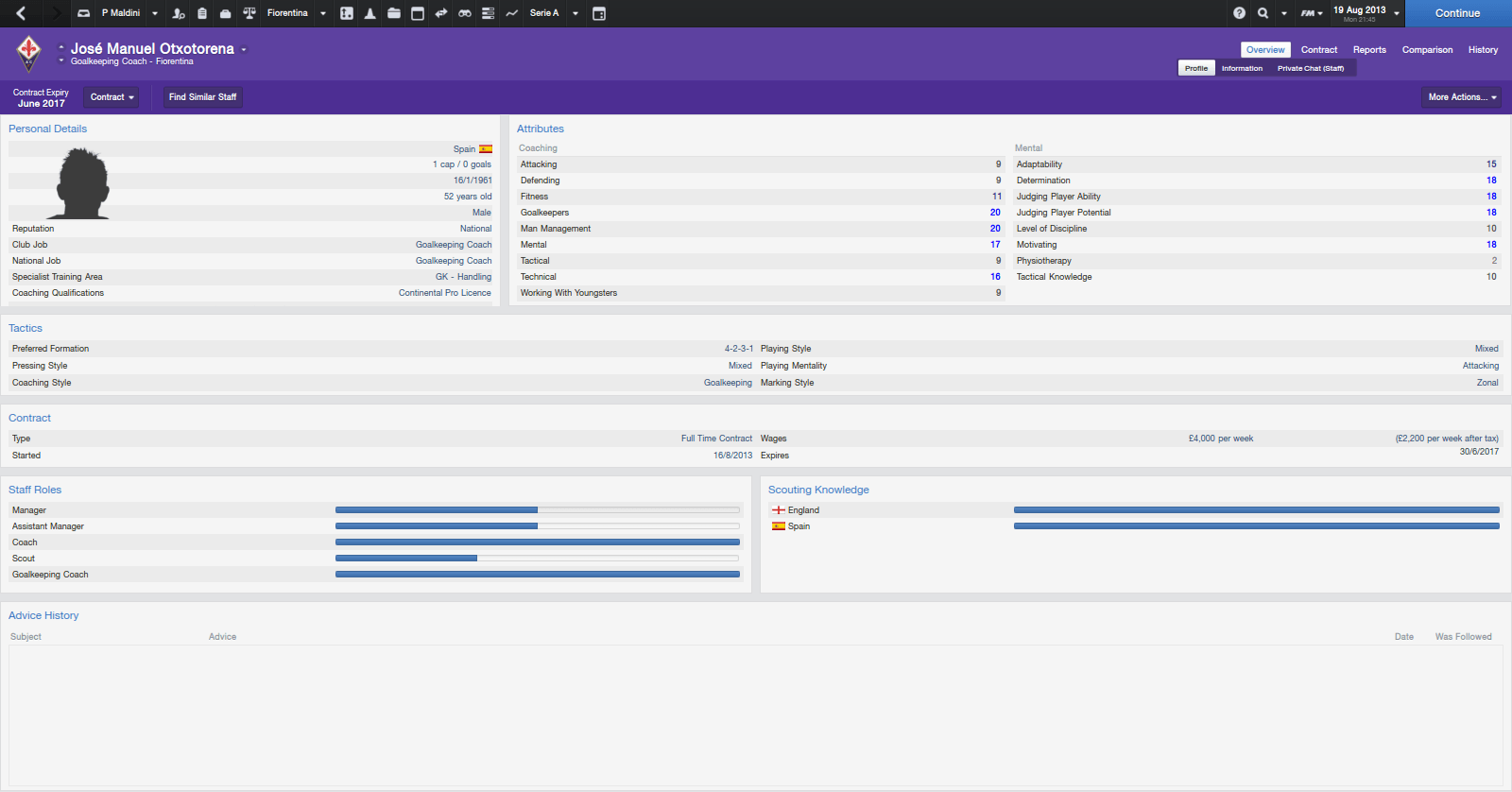 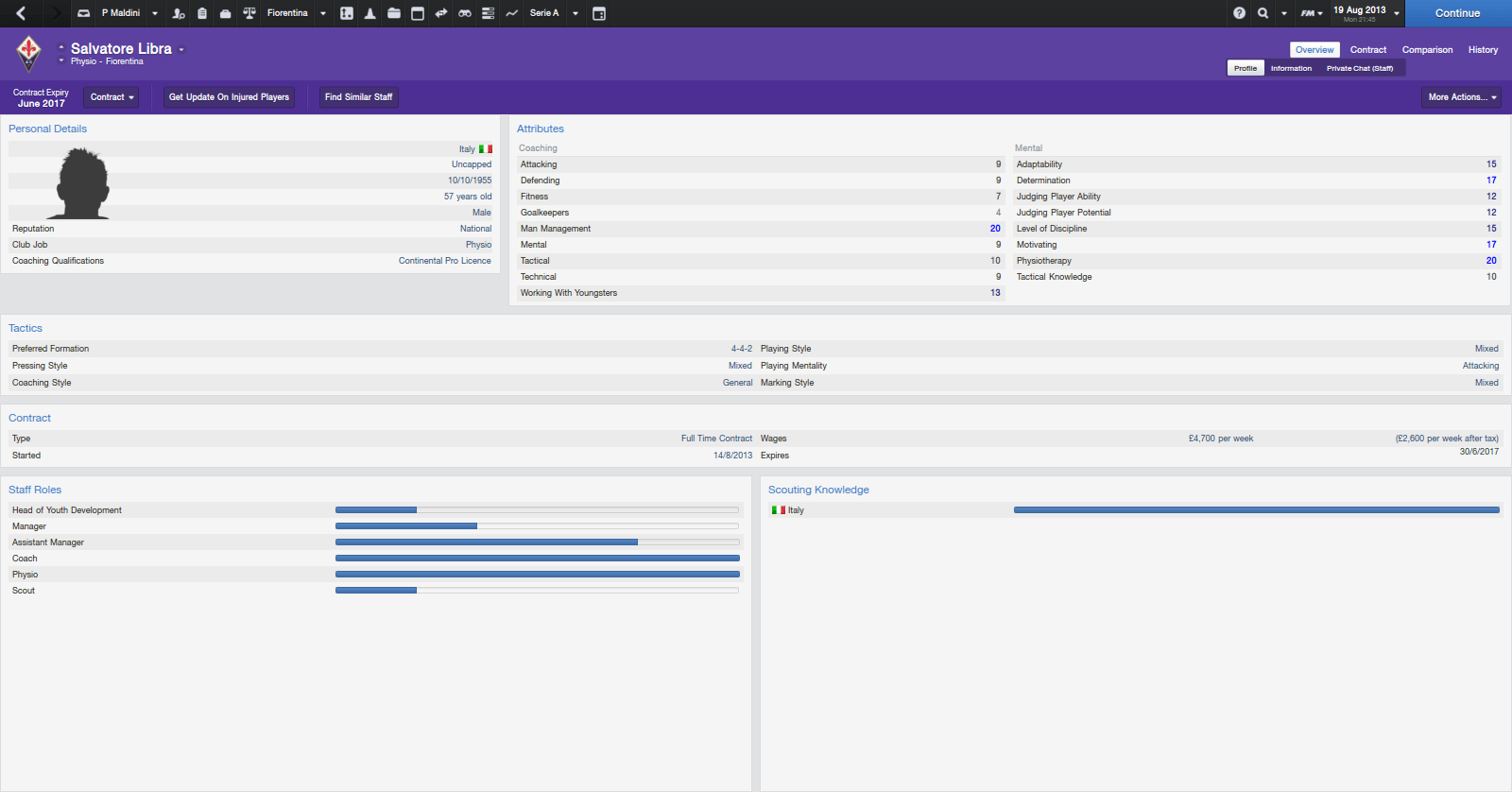 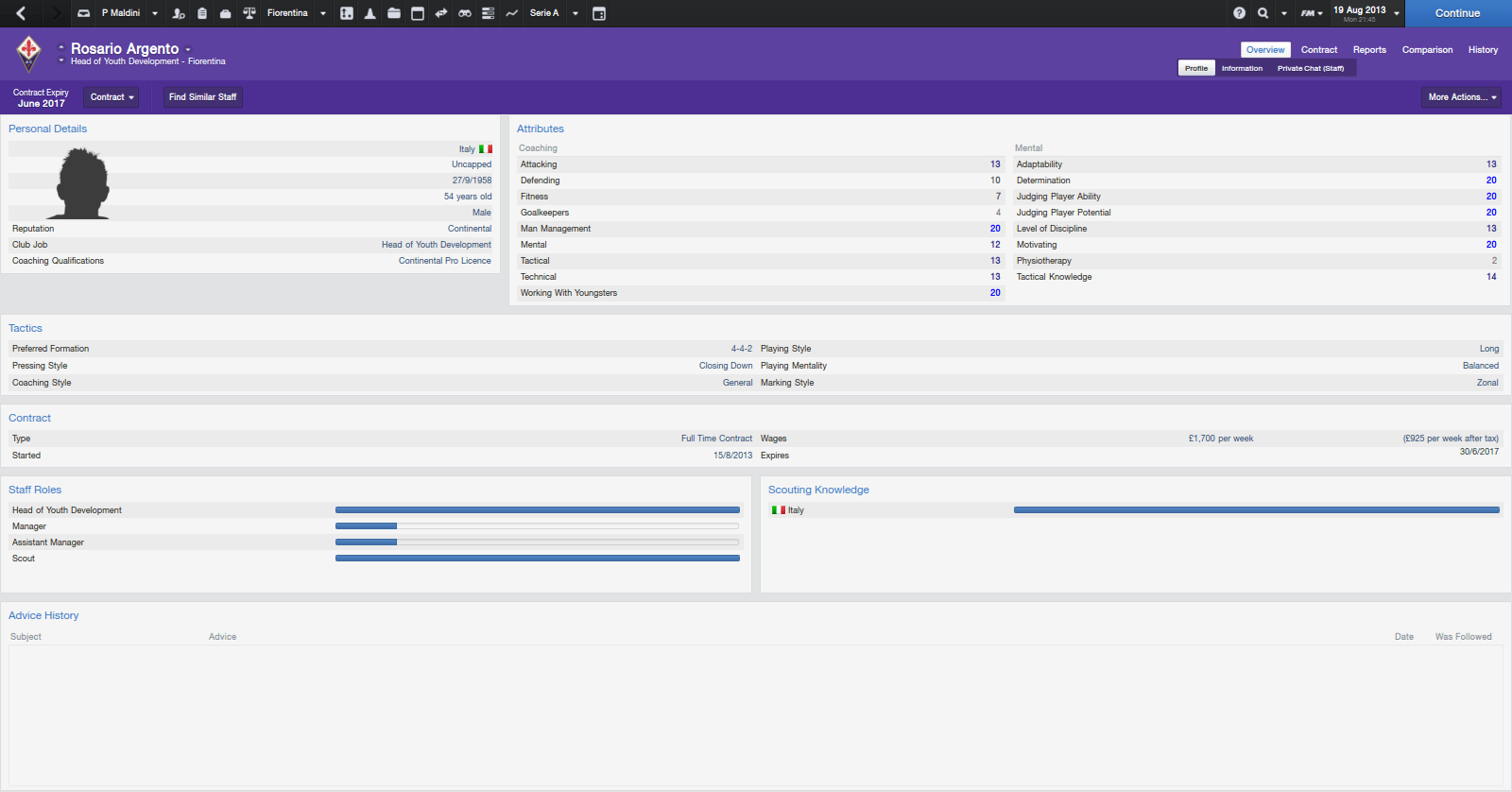 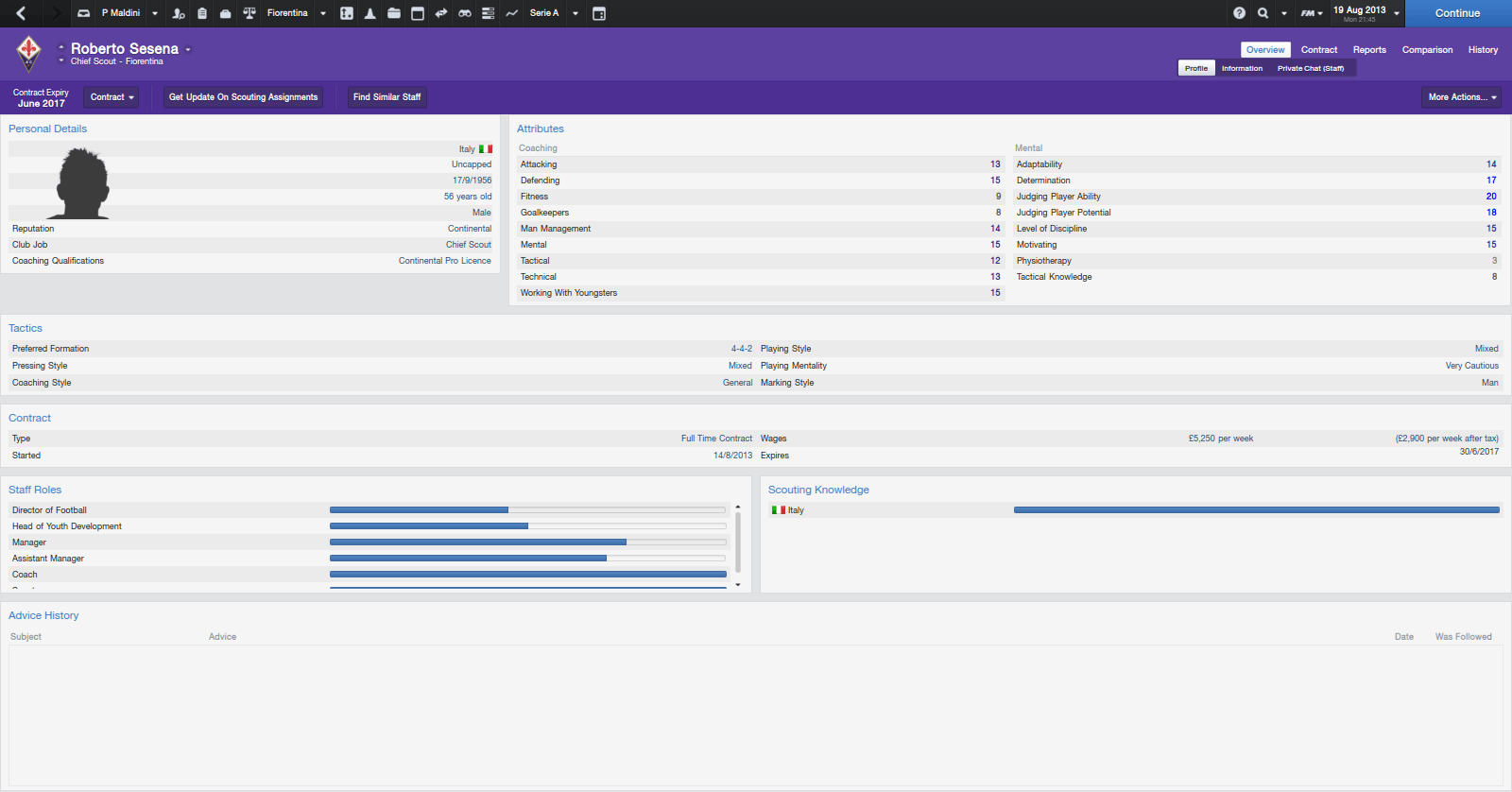 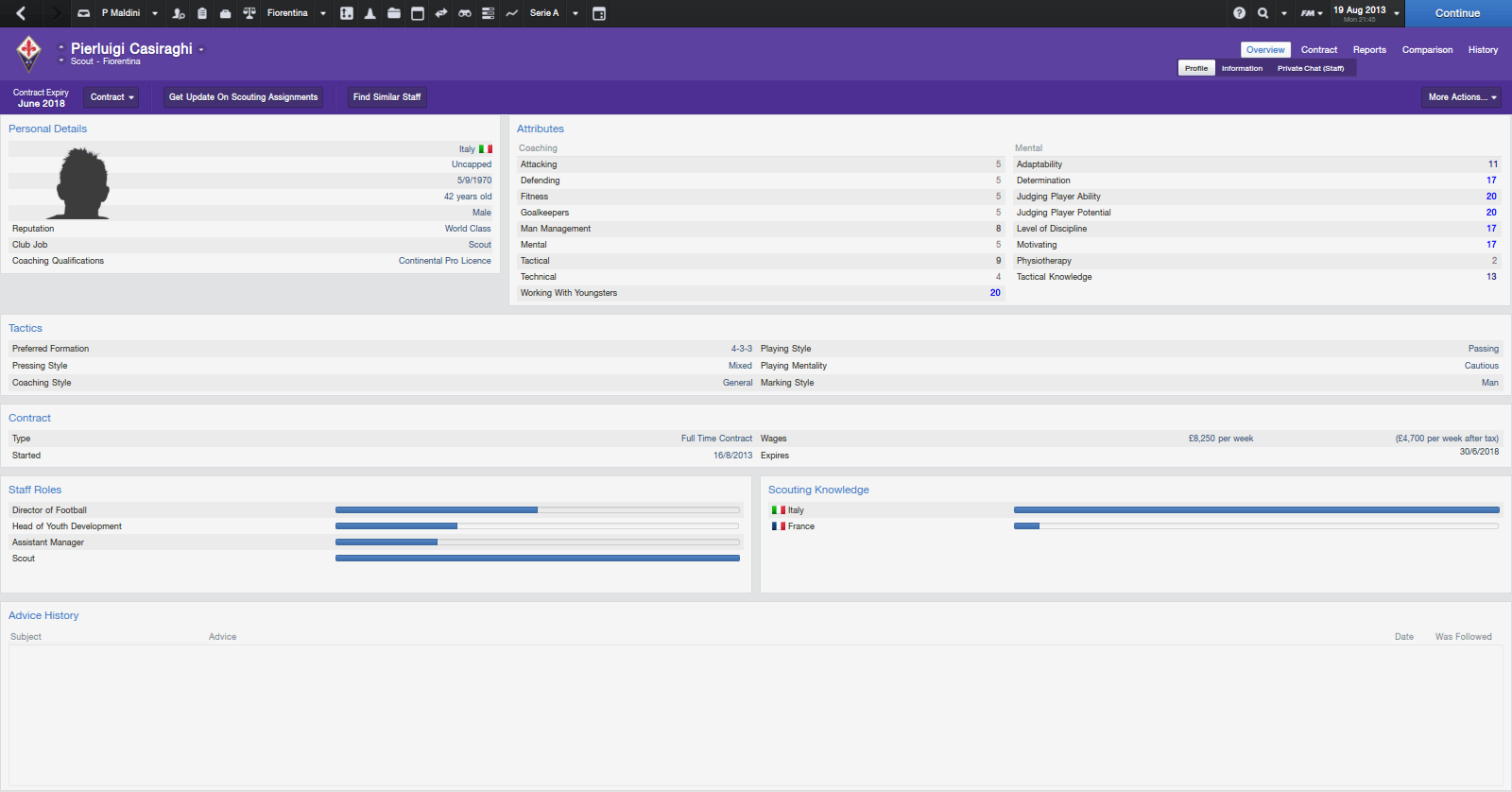 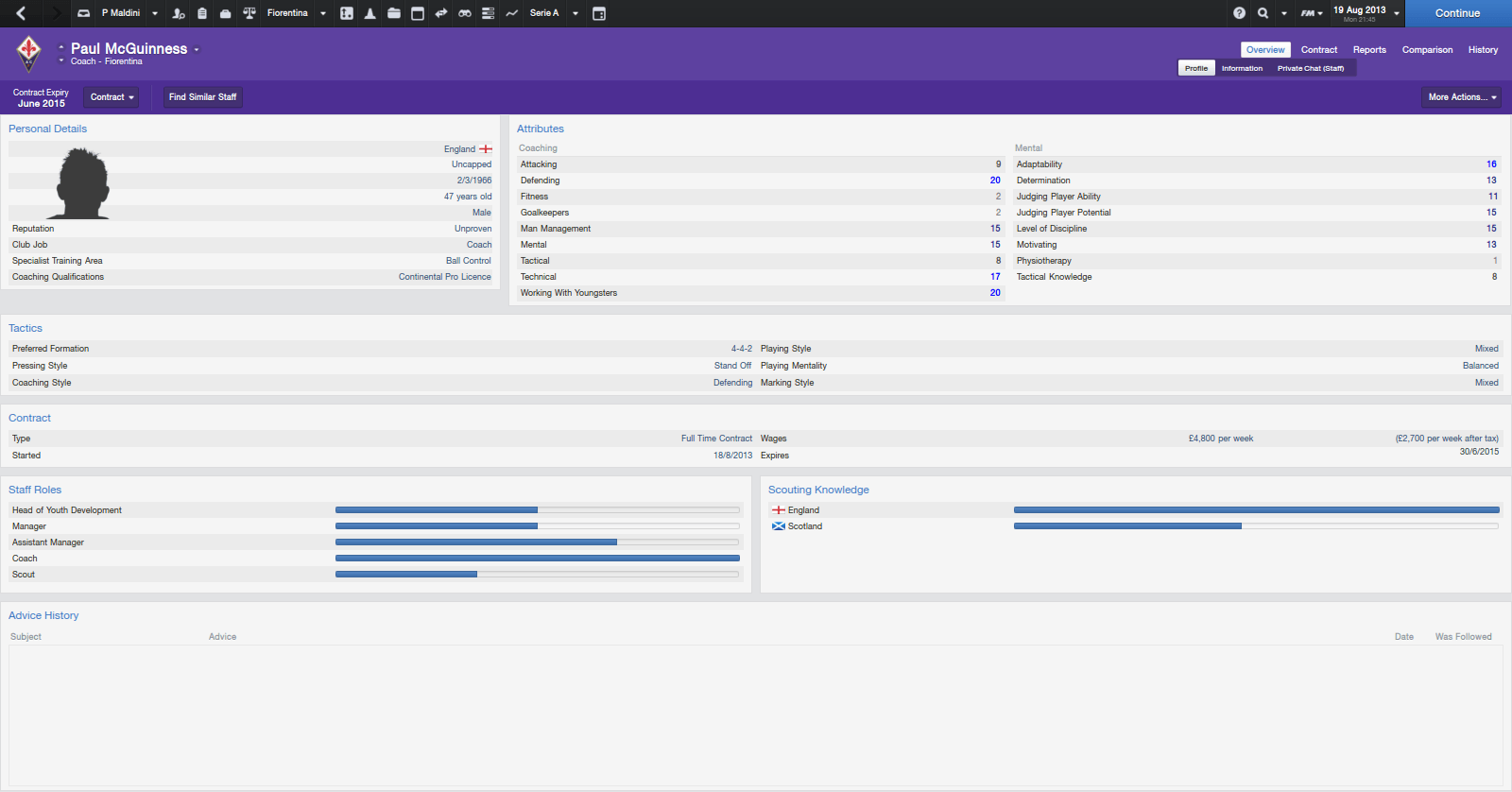 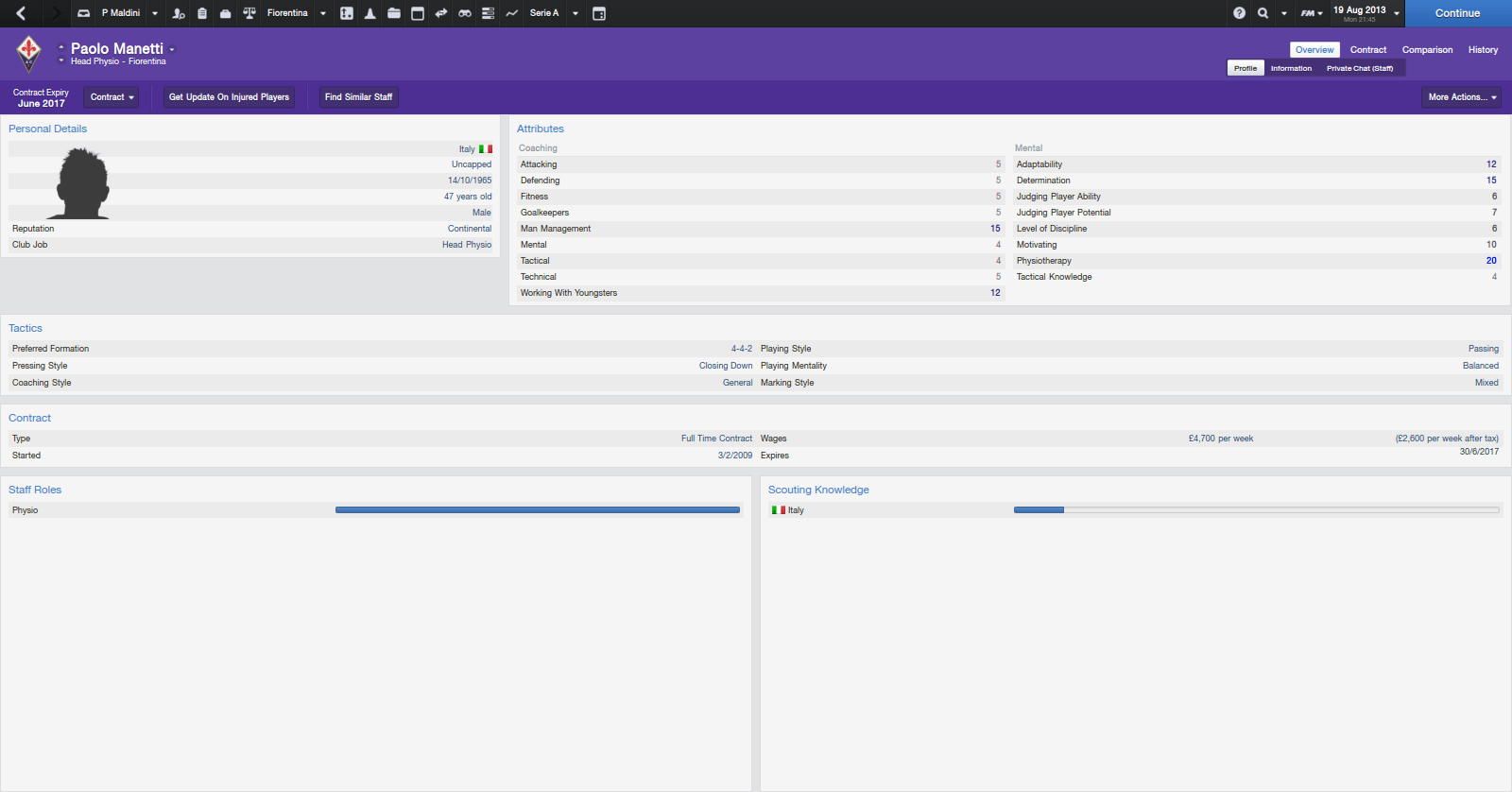 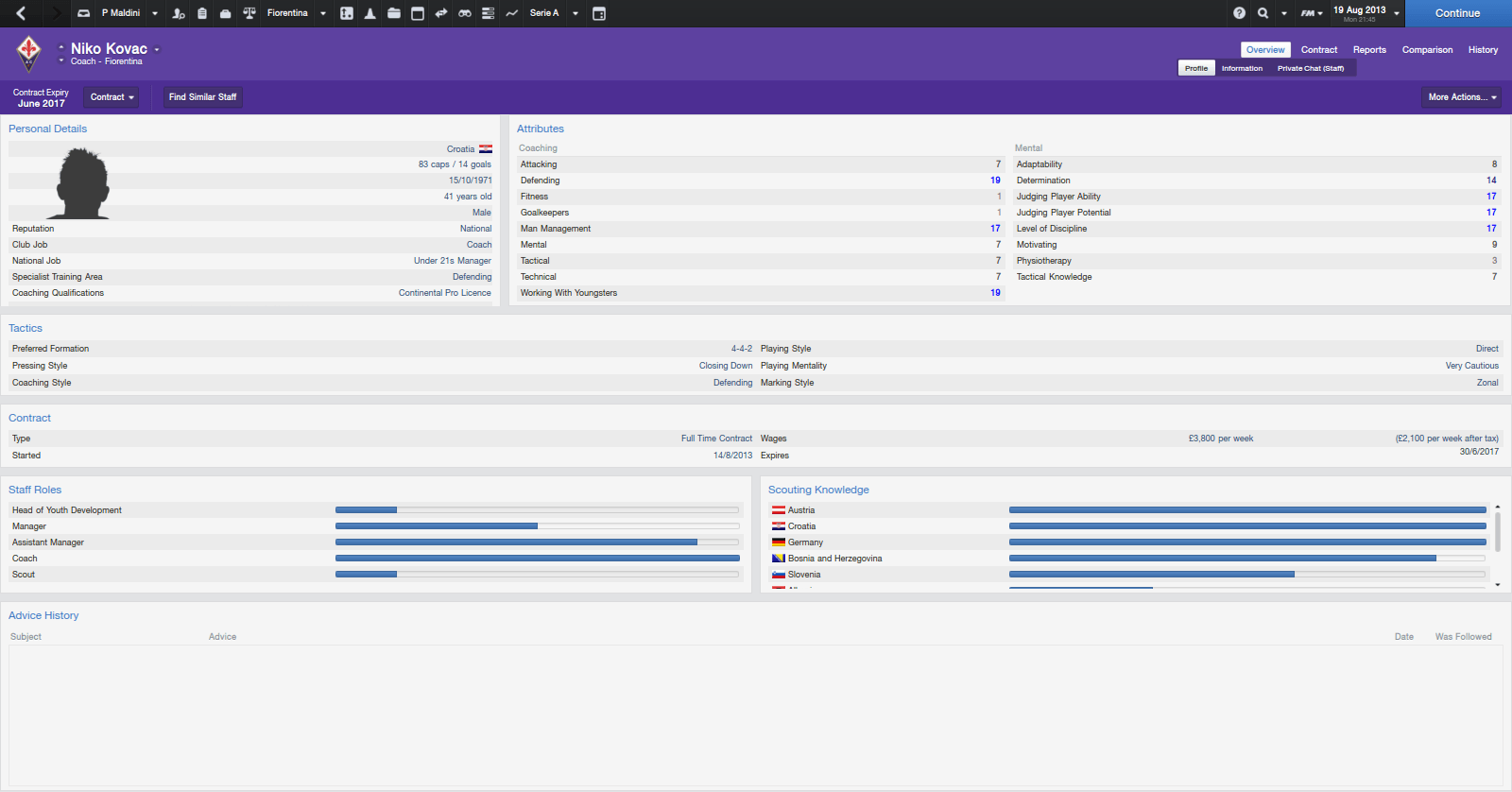 Maldini, has also made three additions to the team which will add to the list of just Bellusci, those signings are:

Sky Sports did catch up with Maldini, to see how he was settling in and how he pulled off this great stunt...

Hello! Maldini!! Yes, hello my friend, we wanted to ask some questions?

We wanted to ask, how are you settling in at the club? and what you think of your three new signings?

Well, im settling very well, everyone has been so welcoming and the board have been really supportive of my ideas such as wanting to develop the club using our own youth talent. I am happy with the signings we have made, Kevin, will hopefully be another great addition to the club, I think he'll be solid when facing any strong forwards. Luigi, i was thinking more in futures direction, hes very young and we needed a right back anyway, so you can expect him to get game time and i have promised him that, and as for Richairo, he is definitley a hot prospect and I cant wait to see him blossom into one of the worlds best strikers..

Ok, well one more question and we'll get out of your hair, How did you manage to pull off a great stunt like this? Brining in such a great backroom staff, which some people are rightly calling, one of the best ever staff teams to be assembled!

Well, at the end of the day, its really not that hard, you just need to have good negotiating skills and the full backing of the board and thats what I had, I am pleased with my new team as im sure many fans will be, and im sure some of our players will be fired up by it as some of my new staff were once great legends, that, anyone looked up to really...

Ok, Poalo, thank you for your co-operation, we'll see you soon.
Login to Quote

MJK46
6 years
Cleaning the house,eh? Hopefully that was a good move.
Login to Quote

Aaron
6 years
I bloody hope so! they all are significantly better than the last lot so im sure it was:P
Login to Quote 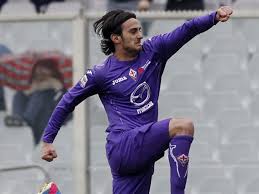 ACF Fiorentina, got their first win under poalo Maldini's managment today, in their first game of the season. The victors ran out 2-1 winners, Alberto Aqualini and Cuadardo were the scorers for Maldini's men in purple, Sasha Cole reports...

"Thank you, John, yes, it was on this pitch that tonight Fiorentina would get their first win under poalo Maldini, Alberto Aquailani got them off to a flyer in the 30th minute as 5100 fans saw a Jouquin cross headed just outside the box only to fall into the path of Aquilani's chest, he then let it fall to his feet and powered it into the bottom corner on the volley, 10 minutes later, georgiy Stoyan would slip the ball through the Fiorentina defence to put Borys Nakonechnyi in a 1 on 1 position that he would finish off with a cool and calm finsh. It took until the 65th minute for Alberto Aquailani to get his first assist of the season, sliding the ball through to Fiorentina's second substitute Cuadrado, who would then do exactly the same as Nakonechnyi did in the first half, finishing it off beautifuly.

Cheers for that Sasha, a good win for Poalo's men in the first leg of the Europa league play off's and we'll look to see how he does vs Lazio in his return to the Serie A.
Login to Quote 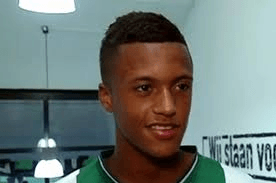 Hello and welcome to Fiorentina TV! Today, brings the new show where we interview different players of the current Fiorentina, this week is the 16 year old starlet Richairo Zivkovic!

Good morning, Richairo! How are you settling at Fiorentina?

Yes, Well. Sorry for my Italian I do no speak it very well, but yes, everyone has been welcoming and kind and I think it is very nice here!

Glad to hear it! Who has been the most welcoming? Who is your best freind at the club?

It has to be Guiseppe Rossi, he has been really kind and showed me around. we also exchanged techniques in training as we are both strikers.

Ok, well who is the best player here? Who stands out?

Again, it has to be Rossi, or maybe Gomez, they're both evenly matched, jouquin is also very good.

Ok, last question, as we know you need to get back to training, how as Maldini been? As a manager and a friend?

Yes, He has been really nice, and supportive, he's promised me game time too which is great and I can't wait to pull on the famous purple shirt inside the first 11 changing room!

Ok, well that is all we have time for, good bye!

Thank you! Goodbye!
Login to Quote

So, a win, a loss and a draw in Maldini's first month in charge, Fiorentina started the month with a 1-1 draw at metalurg getting the vital away goal, Fiorentina will feel they deserved more, after dominating the entire game. then it was off to Rome vs Lazio where Maldini picked up his first win on his return to the serie A beating Lazio 1-0. Then Metalurg flew to the lovely city of florence, coming out with a spot in the Europa league group stages, Fiorentina were headed for that spot until shopin cruely ended those hopes in the 87' minute of the game, again Fiorentina dominated and Metalurg got off lucky to not let in atleast one goal.
Login to Quote


Some of you guys may have noticed that the results have changed in the month of august, that is because last night when i quit FM i never actually clicked 'save and quit' sorry for that guys!
Login to Quote

Aaron
6 years
Sorry guys, but I'm going to have to end this story. I feel at the moment I just cannot get into the save with fiorentina, and I'm just not enjoying it and if I'm not enjoying it then my updates won't be the best I can make them. I did start a new save, just to see if I enjoyed it and I did! So, there is a possibility I will start a story on that in the next week or so! Cheers guys:)
Login to Quote

2013-10-19 12:24#138598 AaronHJFT96 : Sorry guys, but I'm going to have to end this story. I feel at the moment I just cannot get into the save with fiorentina, and I'm just not enjoying it and if I'm not enjoying it then my updates won't be the best I can make them. I did start a new save, just to see if I enjoyed it and I did! So, there is a possibility I will start a story on that in the next week or so! Cheers guys:)

I can understand that as I was Fiorentina on FM13 and it really was a tough team to get into. Think carefully about your next story to avoid just loading the forum with story after story.
Login to Quote

Aaron
6 years
Yeah! That's why it was so hard for me to end it! But what I'm gunna do is play up to January/Febuary and see what happens...I'm going to think very carefully about it!
Login to Quote

You are reading "Fiorentina - A new era!".