Cappy13
6 years
As my Luton Town one failed I've started this Wolves one.

Why I chose Wolves?
I've done a Wolves save on all FMs since FM12. I did one in the BETA and it was fun as they have a squad for the PL already with a few other signings.

Cappy13
6 years • Edited
Initial Thoughts:
The squad is very strong but there are a few players with huge wages who I will happily let go for the right price. Aiming for instant return to the Championship and good showings in the Carling Cup and FA Cup. Eventhough not that well a know trophy look to win the Johnstone Paint trophy as it is a trophy and boost morale well.

Formations:
I am using 4-3-2-1. This isn't the usual formation this is my Flat 3 formation with 3 CM's 2 wide attacking Midfielders and the sole Striker this is great due to the 3 CM's due defending and attacking and it means I can leave 3 players upfront

Transfers:
Start with the funds of 775k budget and 475k in Wages weekliy.


Foley moves to Wigan
In the last few days Wolverhampton Wanders can confirm the departure of Kevin Foley to Wigan Athletic in a move worth £2.2million. Wolves Manager Alex Capp is said to be upset with the departure as he would of liked to keep a player of Foley's calibre but has told Wolves fans the funds will be spent on new players to strengthen the squad

Keith Fahey Signs for Wolves
Fahey has signed for Wolves on a 2 year deal earning 10k per week. Capp is delighted to welcome Fahey to the club and is hoping Fahey can bring his wealth of Experience to the squad. Fahey has been looking for a club since his departure from Sky Bet Championship team Birmingham City
Login to Quote

Should I do it for separate transfers as well?
Login to Quote

LFC
6 years
I would yeah, makes stories look much nicer.
1
Login to Quote


Two more Wolves players have joined Kevin Foley out the door at Molineux.

Richard Stearman returns to the PL
Stearman has left Woverhampton with fans said to be unhappy about the sale of the Centre Back. Manager Capp is said to be looking to instantly re-invest from the sale with a wealth of targets in mind with Harlee Dean of Brentford to be top of his Transfer Targets.

Elekobi in Forrest switch
Elekobi has left Molinex for The City Ground in a £1.5million switch. Fans are happy with the departure of Elekobi for such a large profit and are looking forward to seeing how the money will be re-invested
Login to Quote

Team Lift
6 years
good so far, will be following


Capp is delighted to welcome two new faces to the Wolverhampton squad in the shape of Harlee Dean and Luke Freeman. Capp has stated his delight in the procurement of the two players brought in through the re-investment of early sales in the transfer window, with many players still to be looked at with Capp looking at some more defensive reinforcements in the shape of Jordan Spence of West Ham and Greg Cunningham of Bristol City

Harlee Dean to replace the shadow of Stearman
With the signing of Harlee Dean Wolves fans are happy with the capture of Dean due to the his potential and hope he stays at the club for a long time to come. The fee of £1.2million comes at only half the price of what Stearman left meaning there is still the money to spend.

Luke Freeman is brought in
Capp has described the signing of Luke Freeman as one of importance as he believes that more wingers are needed in the squad and still could be in the market for another. With Freeman coming in for £750k all fans around Molineux is looking forward to seeing Freeman playing for Wolves.

Jake Cassidy wanted the move!
With two bids already rejected for the young Striker many thought that Cassidy was to be staying at Molineux but after recent talks between Cassidy and Capp, Capp has begrudgingly accepted Cassidy's wishes to leave the club for a larger one. Capp later said in a statement that Jake has been sold due to his desire to play for a bigger club and was not accepting Capp's promises to match his ambitions.

Sigurdsson was surplus to what I needed
With Sigurdsson only have been at Wolves for a year many are surprised by the sale of Bjorn but Capp in a statement has said it was nothing personal against the player he just didn't see the player having a future at the club.

Reporter: So Capp this is your first Foray into the window. Are you happy with your acquisitions?
Capp: Of course I am I only sign players with great potential or those who will challenge for the First Team.
Reporter: I see I see. Will there be anymore activity from yourself in the transfer window?
Capp: Yes there well could be. We have a wealth of targets in mind. I know positions where I need to strengthen before the close of the window and we will have to see who else leaves won't we?
Reporter: Are you willingly to tell us those positions you still need to strengthen?
Capp: At this present moment in time no I will not we need to plan before we can say as to who we bring in.
Login to Quote


Three new faces will be in the Wolverhampton Wanderers dressing room as the arrivals of Jordan Spence, Junior Stanislas and Greg Cunningham have been finalised.

Spence Joins from the Hammers
Spence revealed his desire to prove himself after a hard time in a 7 year spell at West Ham. Capp is said to be delighted with the arrival of Spence and is surprised that West Ham let the Right Back leave for only £850k 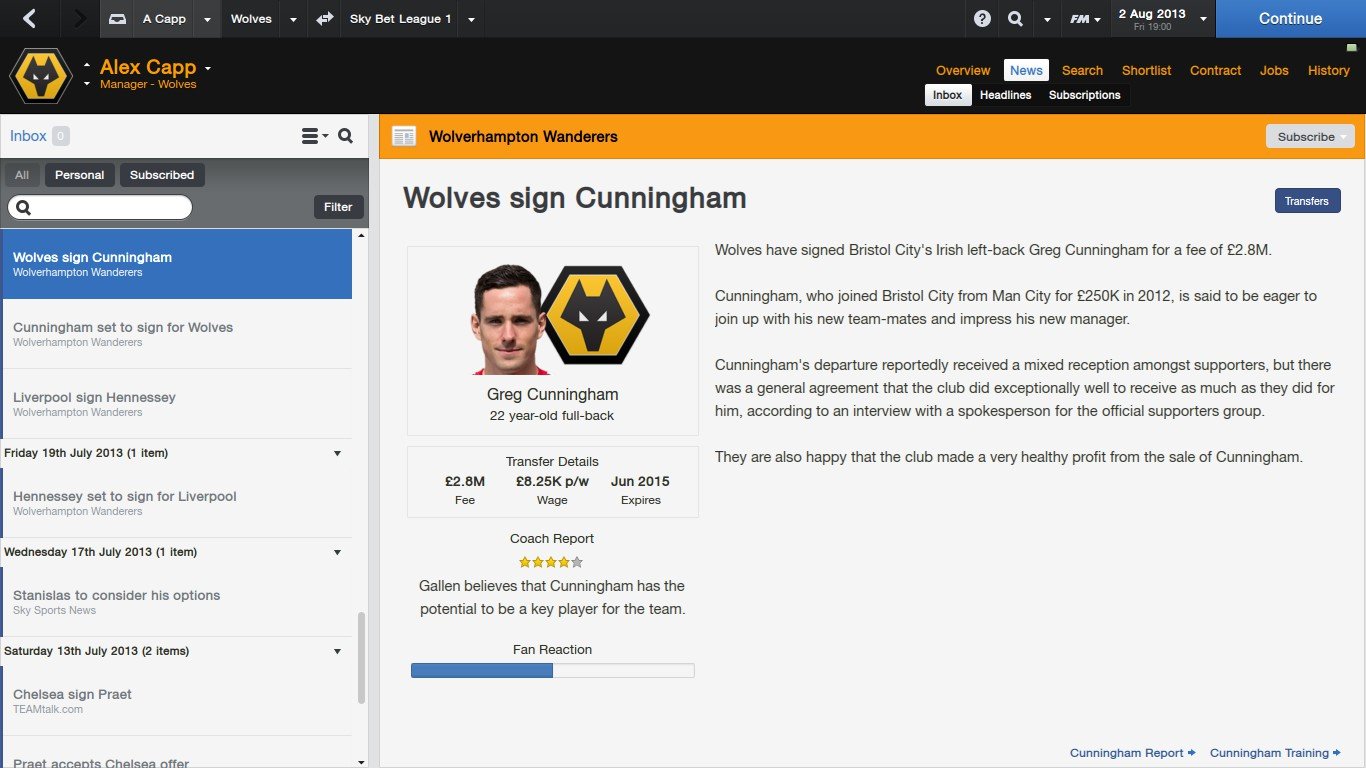 Capp revealed that Doyle suggested Cunningham to him in a recent meeting between Capp and Doyle about the players future. Cunningham is said to be delighted with the project Capp has planned for the squad. 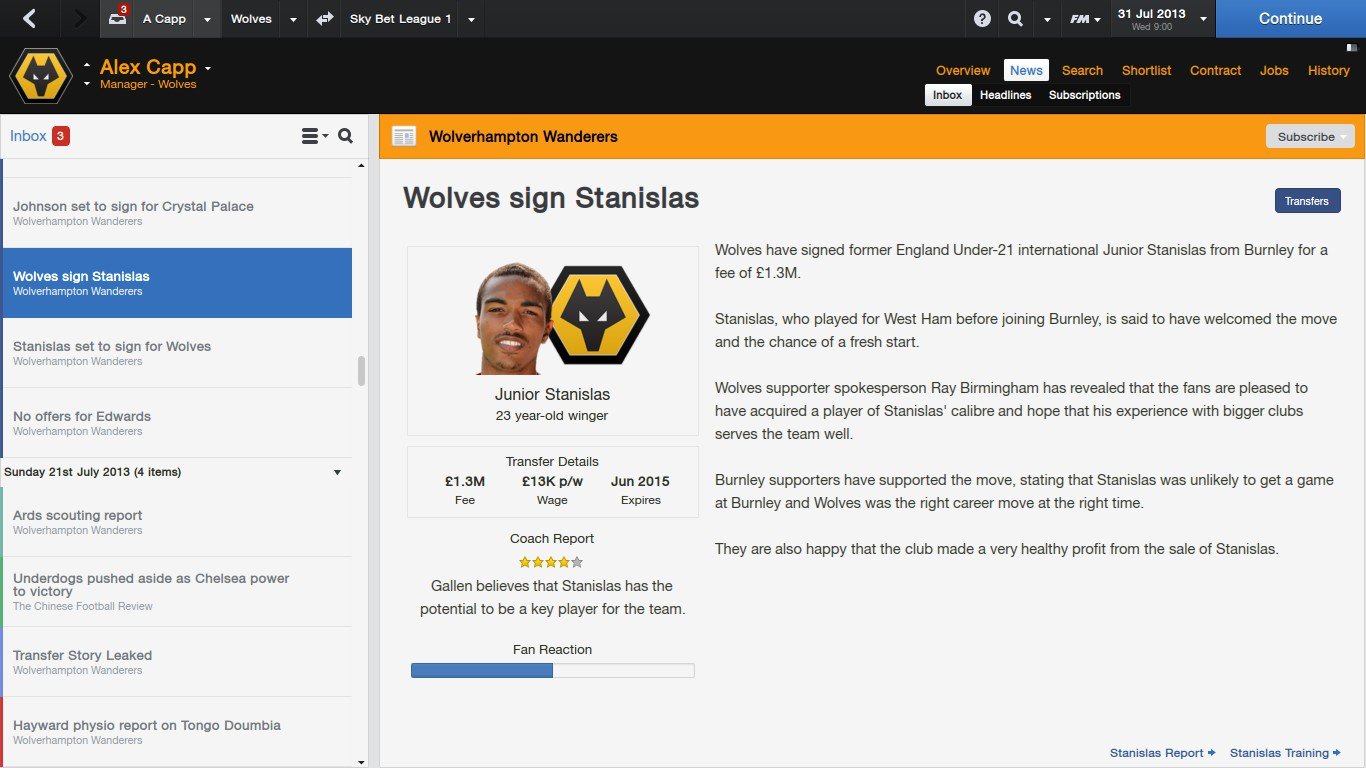 Two further players leave the club however as Hennessey and Johnson both leave for life back in the Premier League.

Wayne Hennessey relieved to be back at the Top 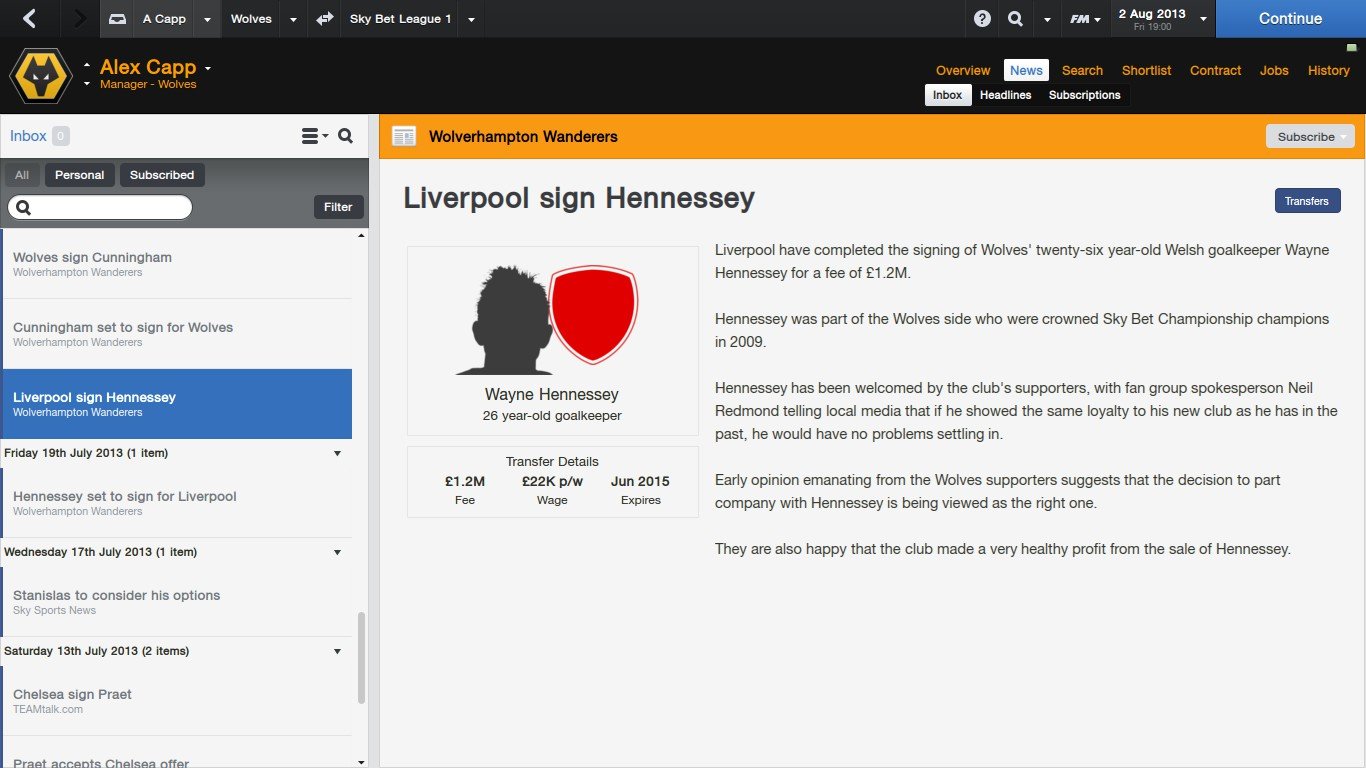 Wayne has revealed his relief at being given a shot back in the top division, however both Capp and the Board are unhappy over Hennessey holding the club to ransom as to his deal in staying. This moved their hands in the selling of Hennessey to Liverpool for £1.9million plus future incentives of 30% of the next transfer fee.

Johnson moves to the PL after long, positive talks with Capp 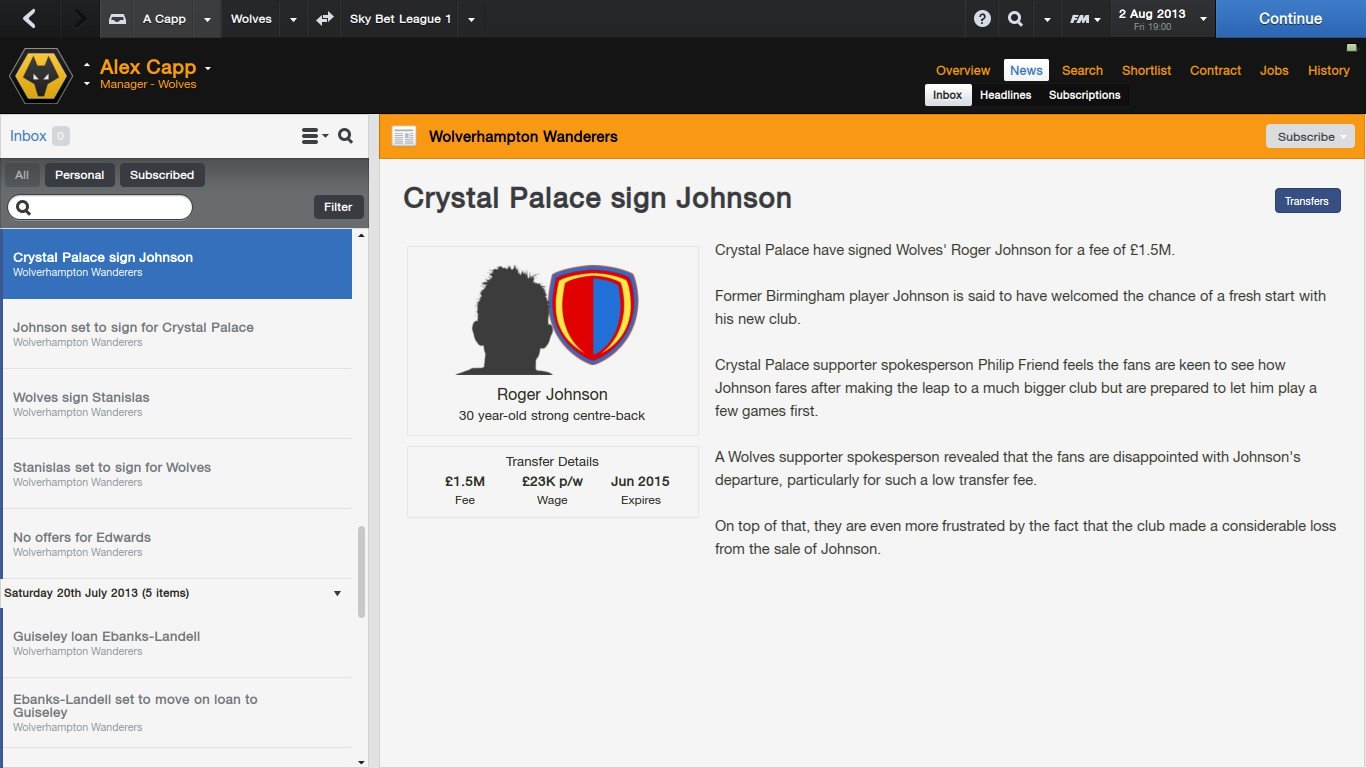 After long discussions between Capp and Johnson, we see Johnson move onto new pastures. Both parties left on good terms though with Capp wishing Johnson all the best at Palace. Johnson is thankful of Capp for understanding and letting his wish come true with moving to a bigger club. The Board and Capp are both pleased with the wages freed up from the sale of Johnson.

Rumours are rife with who will be moving to Molineux to replace the gap left by Johnson. Names such as Dedryck Boyata and Craig Cathcart have been touted for permanent moves while Tomas Kalas has been talked about coming in on Loan.
Login to Quote

You are reading "Wolves - Hunting the Top".