Wolverhampton Wanderers have been crowned Champions of League 1 by winning the league with still10 games remaining. They have won it so early with 36 games played by winning 31 and drawing 5 games. Many see the goals from Doyle, Griffiths and Sako as major contributions to the title win along with the defensive performances from the whole defence as well should they are made of stern stuff. When Capp was asked about his team's performance and next season's ambitions he had this to say:

I am absolutely ecstatic for the lads we worked extremely hard in training and it's all paid off the Lads can be proud of what they have accomplished. With next season I am an ambitious man but as a team we will al have a sit down and talk I feel we can challenge for the play-off places with a few additions but I will be just as happy if we get a top half finish.
Login to Quote

Exciting month comes to an end

Well the end of a exciting March. We played really well with strong performances throughout. The JPT final was a bit nevery but we came through and won it on penaltie in the end. My ma of the onth is Bakary Sako he scored 4 goals and got 4 assists through the month. 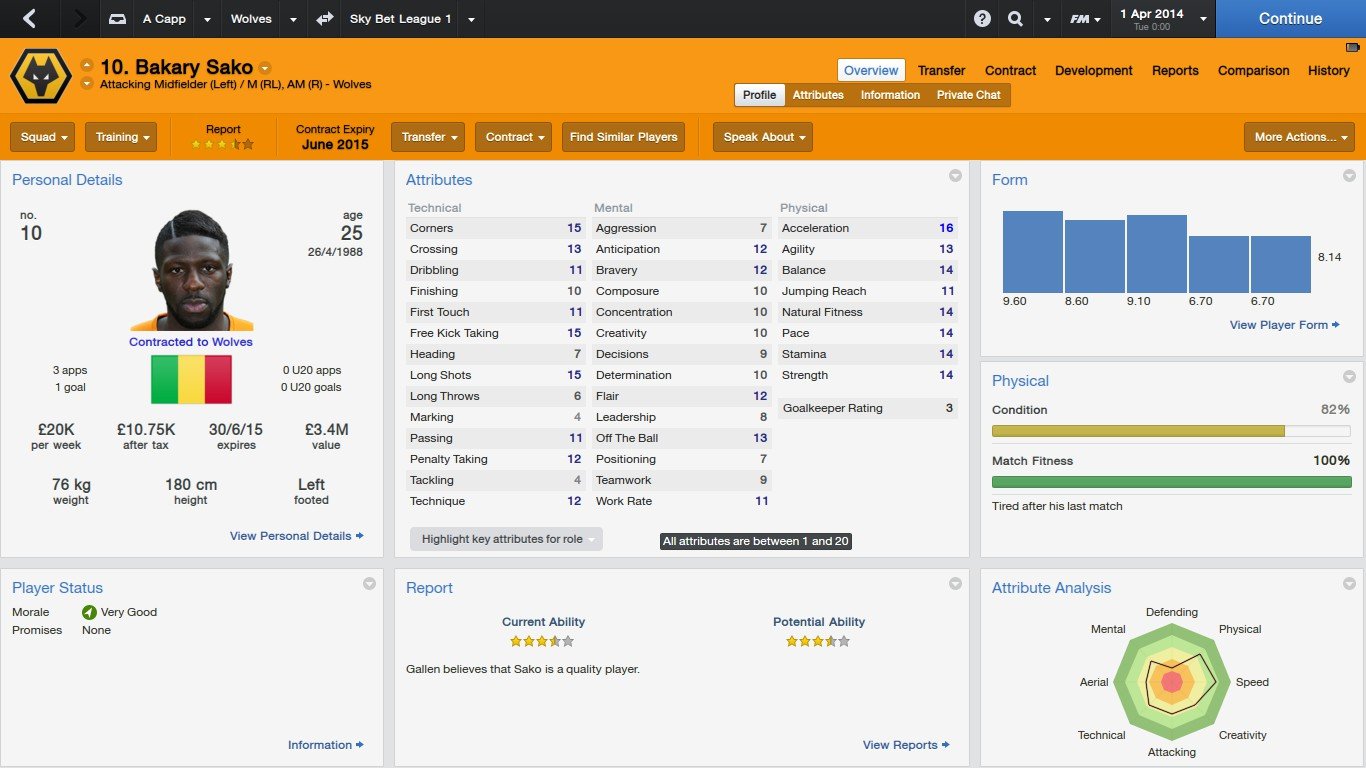 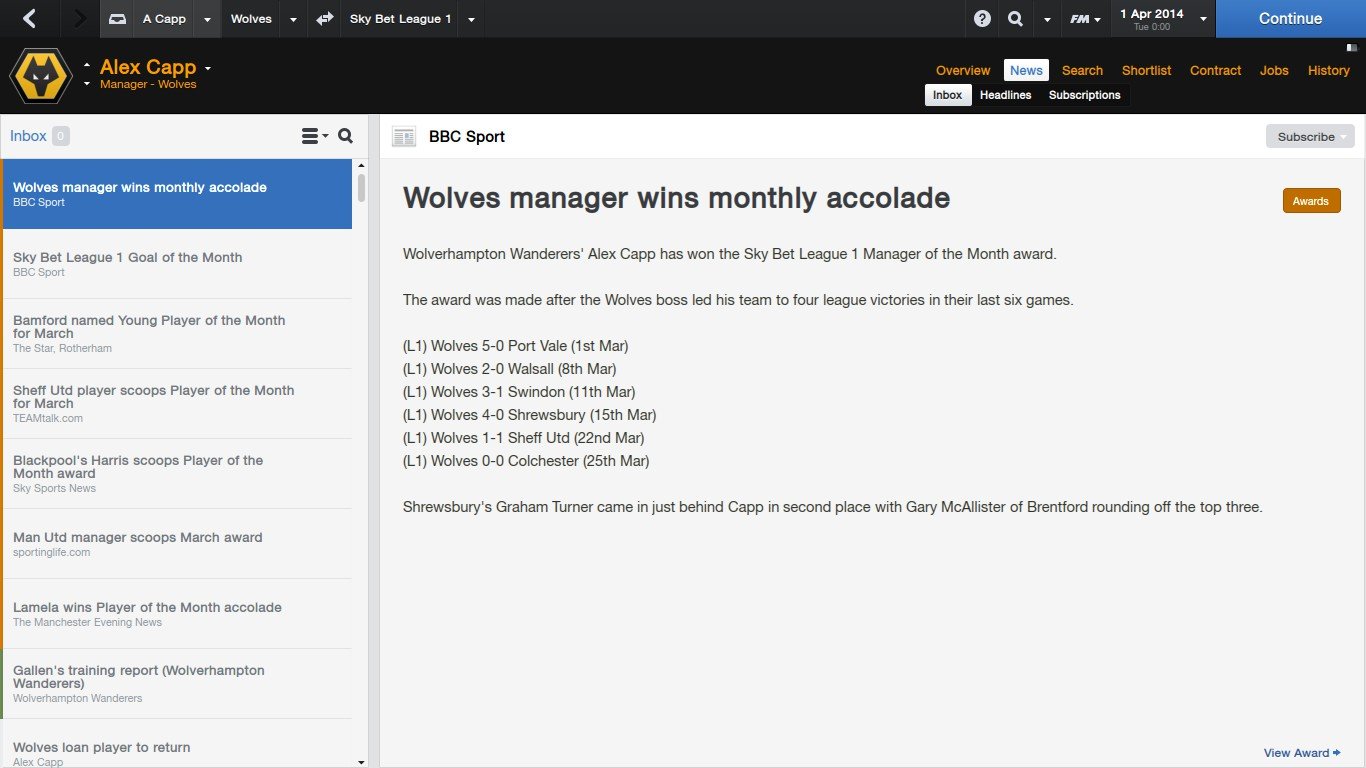 I am pleased to have won this award again I just can't believe that none of my players have won an award yet they deserve one as they are all playing out of their shirts to win the promotion which they have done and I am pleased with that.

Winning the JPT on Penalties 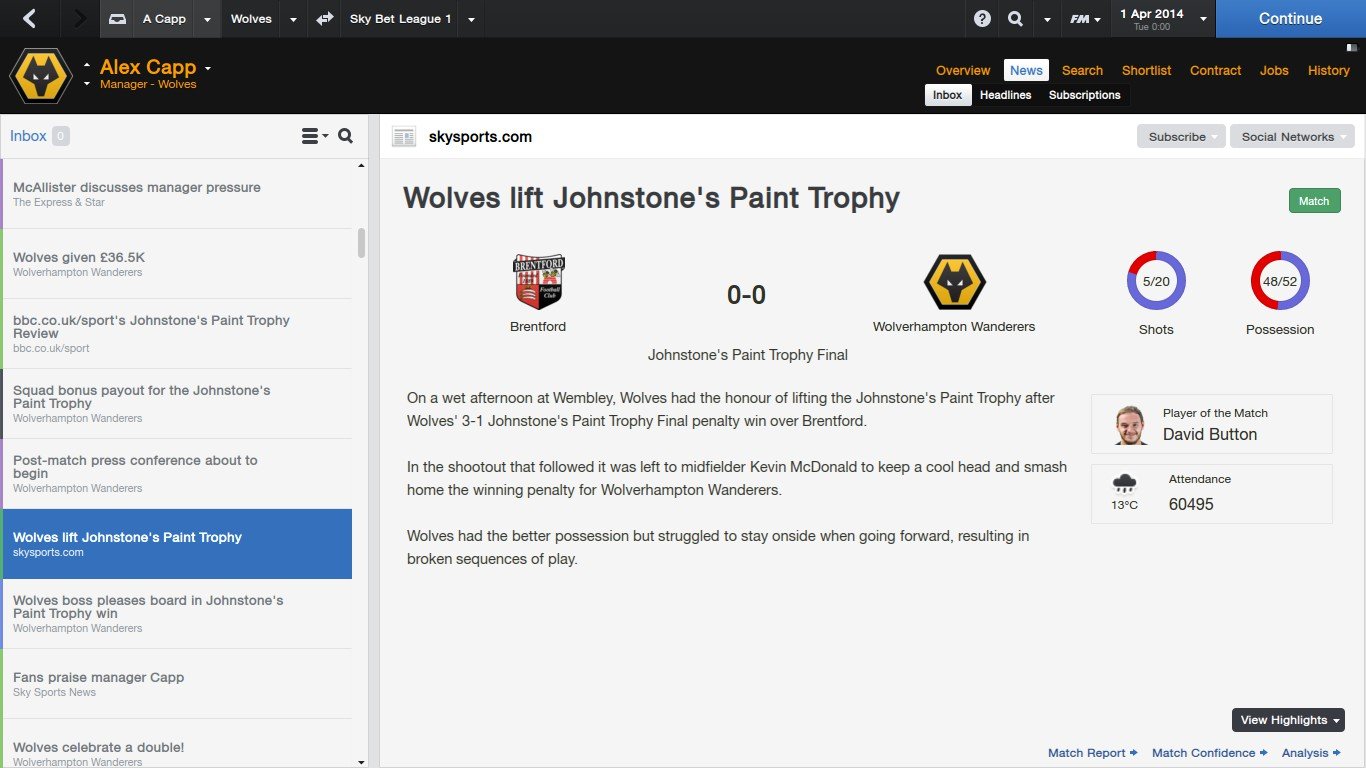 Wolves fan's will be happy by winning even more silverware this season by the team winning the JPT Cup to go with their League 1 title.
Login to Quote

Season comes to a close

The season has come to a close and Manager Alex Capp can look back at the season with great pride for his team where they won the Sky Bet League 1 and the Johnstone Paint Trophy. With his main performers being Doyle Griffiths and Sako. He can be upset however losing two games in the closing months.
Kevin Doyle 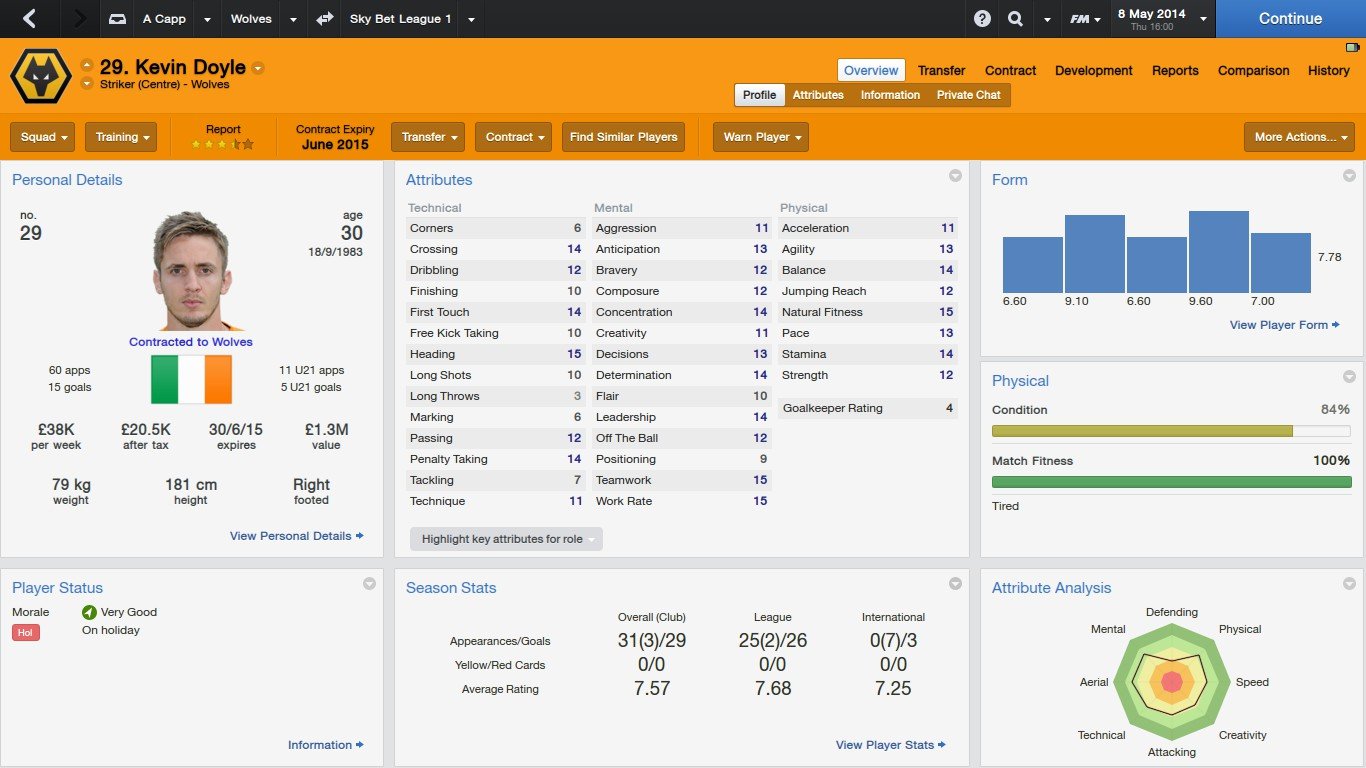 Kevin Doyle is was Wolves top goalscorer for the season and even with his injury putting him out for a month he still became top goalscorer with 29 goals and getting 10 assists. Sako was a great performer for Wolves with the winger dominating most games he played. He scored 21 goals and got 24 assist's he is one of the most valuable players for was with scoring and assisting many goals. Griffiths was a great player for Wolves even though he seemed to be a second string to Doyle he was still able to score 23 goals and claim 6 assist's. He filled in great for Kevin Doyle when Doyle was missing and shared the striker duties with Doyle. 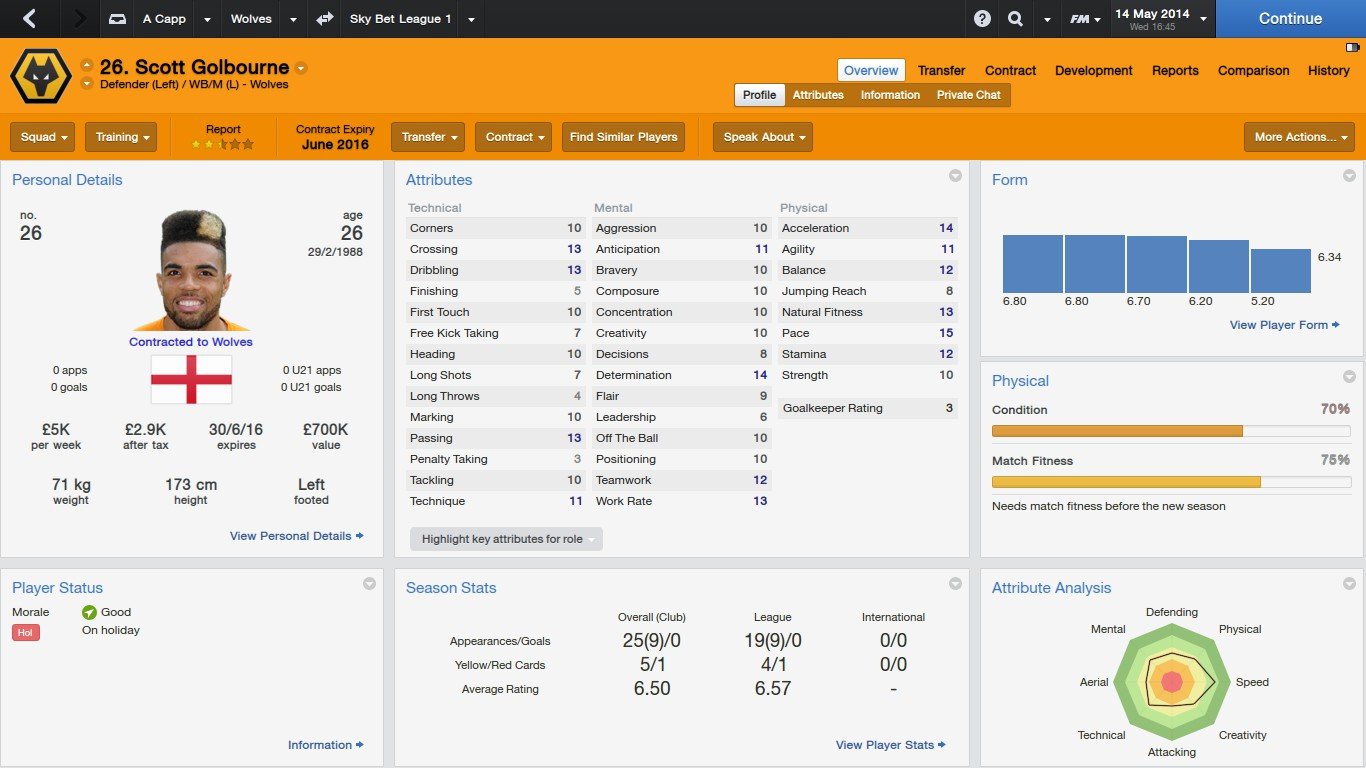 Scott Goulbourne has to be considered as the fop of the season for Wolves as he missed 6 games through suspension and never challenged for the first team only playing when other players where needing a rest for a game.

Awards to be Given out shortly

The League is done 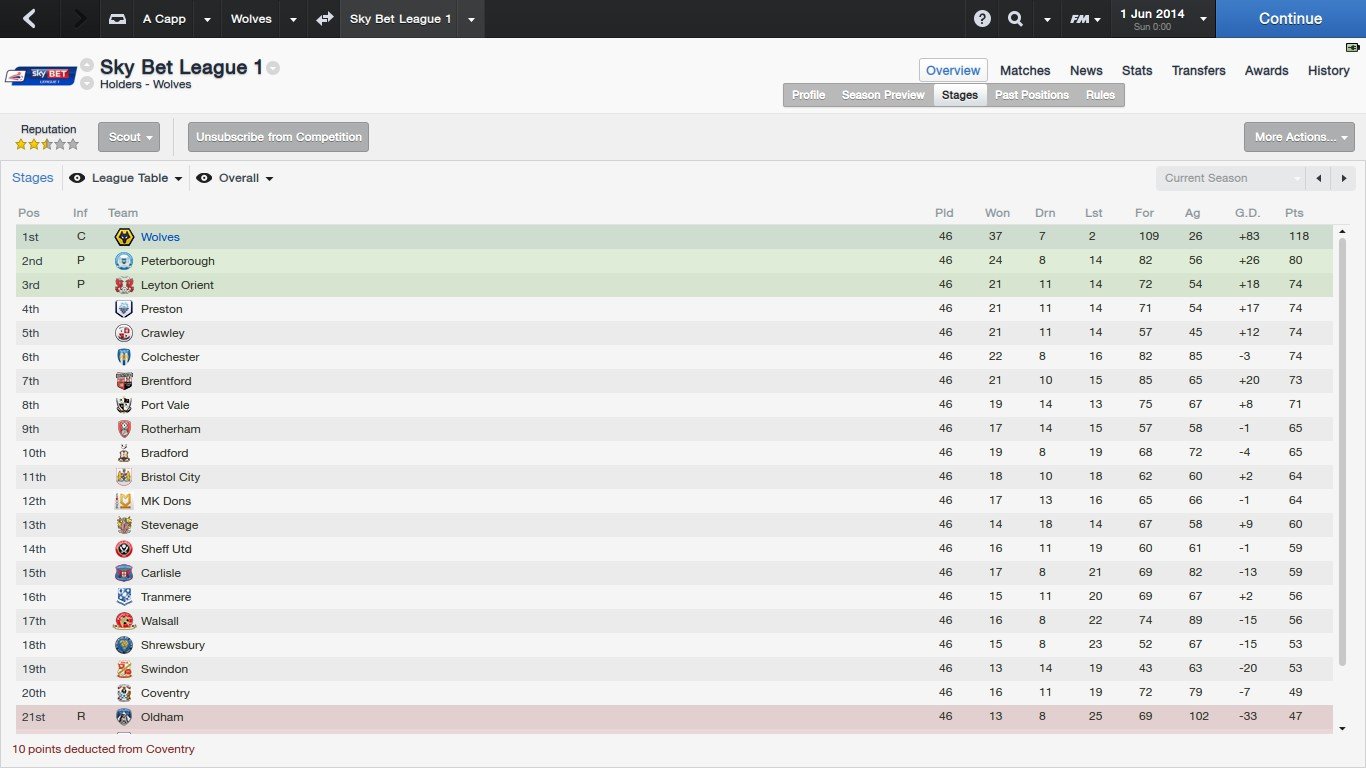 Capp wins Manager of the Year 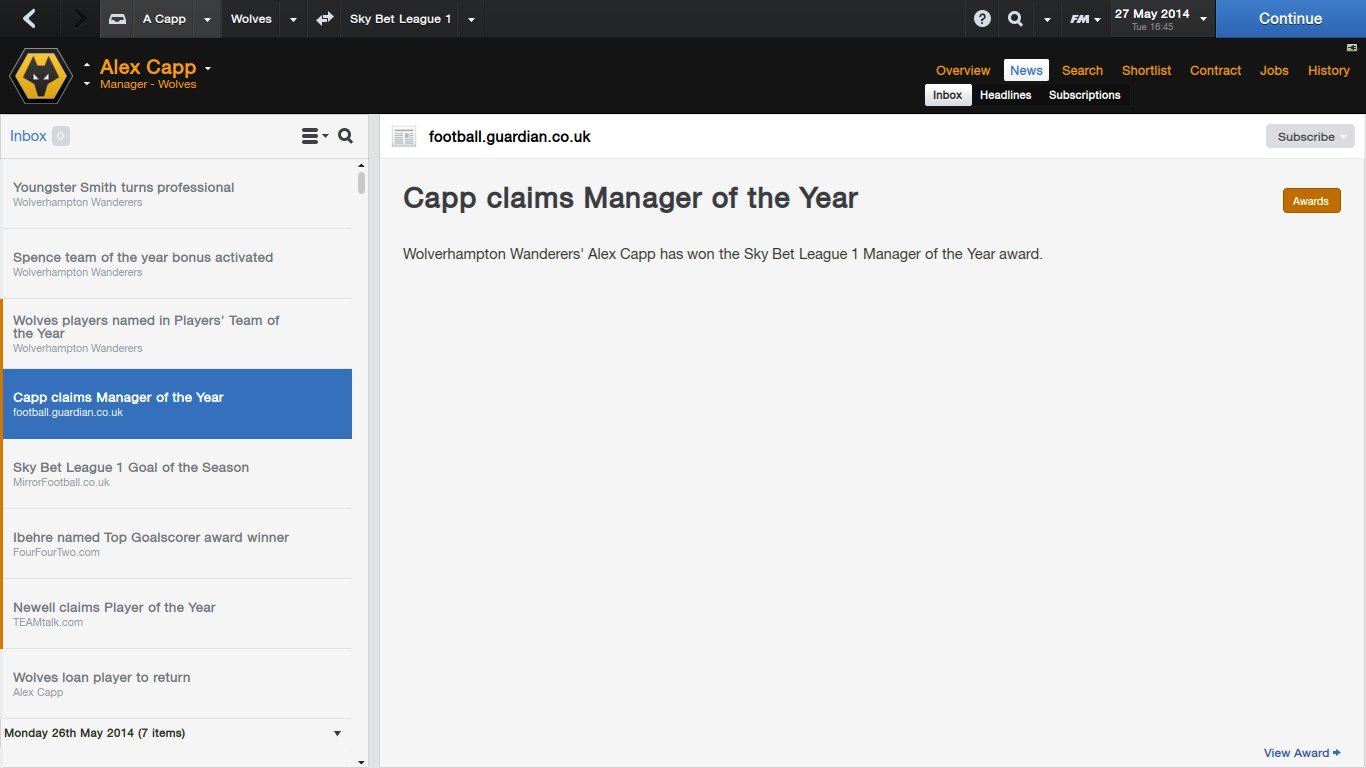 I am pleased to have won this award with this being my first full season I could not be happier. The lads at the club a played massive parts in the season and all performed well.

Four Players named in Team of the Season 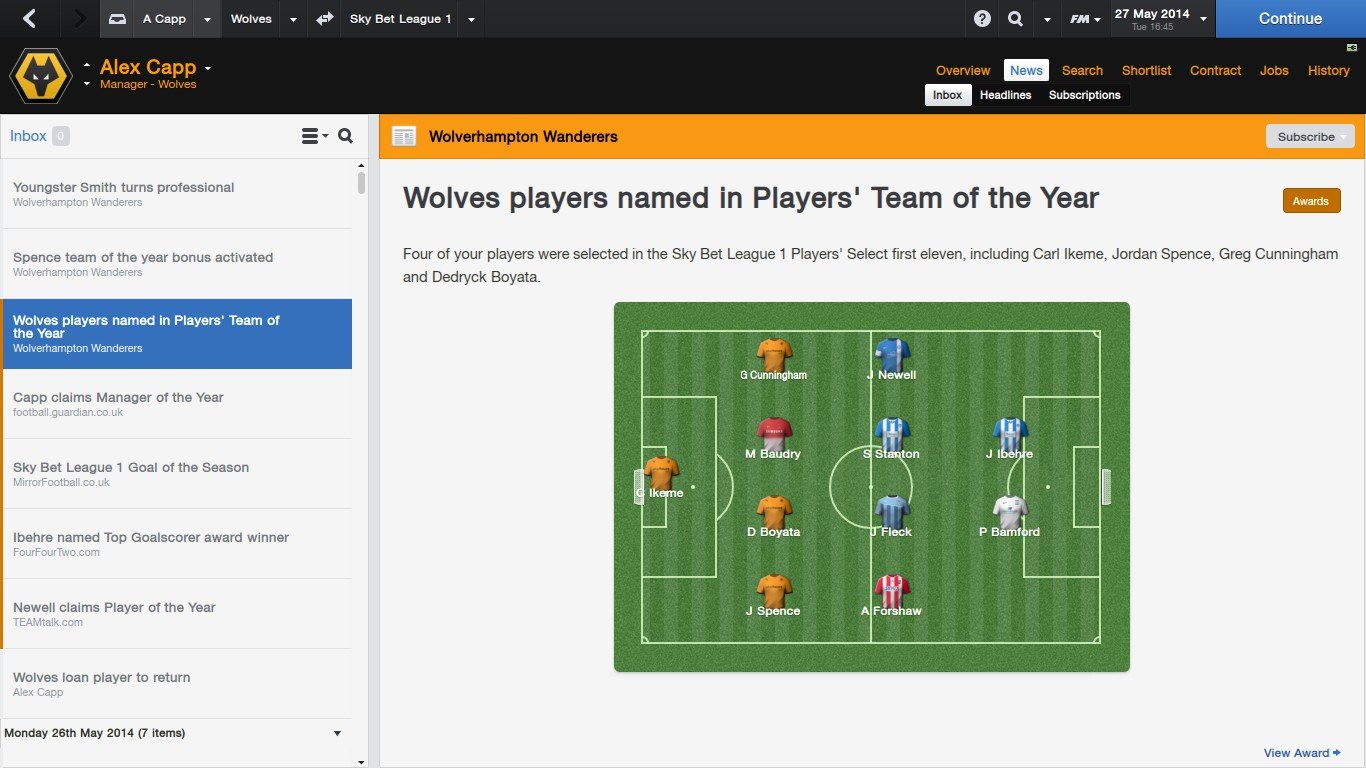 Four Wolverhampton players where named in the team of the season, with Carl Ikeme, Jordan Spence, Dedryck Boyata and Greg Cunningham all named in the team. Capp is said to be delighted for the players and hopes for many more top performances from not only them but all the other teams in the league.

Capp too Evaluate after the break

Alex Capp has declined to comment about changes to the team until he has complete a full evaluation of the team. Many speculate that a few players could leave with Fahey, Ward and Doyle the top of a few clubs.
Login to Quote

Holst and Ings Join but Doyle, Stanislas and Fahey leave Capp is delighted to welcome Danny Ings and Federik Holst to Molineux. Capp s said to be surprised by Burnley letting Danny Ings leave for so little, however Ings is reportedly unhappy at Turf Moor and wanted to move on. 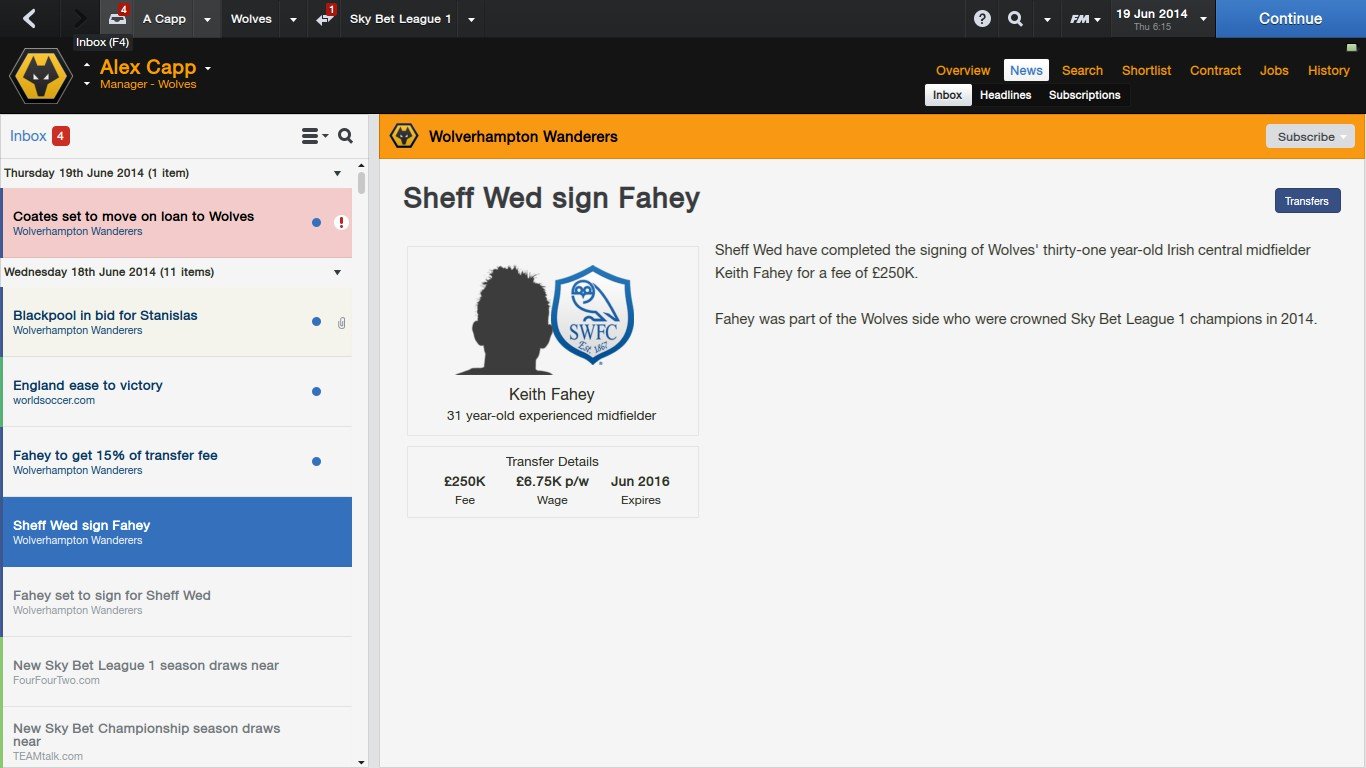 Doyle Stanislas and Fahey have moved on with Fahey leaving for 200k and Doyle and Stanislas leaving for 1 million each. Capp s unhappy with the departures but is looking at possible new faces to fill the gaps left. With Ings and Holst already brought in Capp is looking to replace Stanislas with either a Loan move for Lucas Piazon or a Permanent move for Iago Falque

Coates brought in for defensive cover 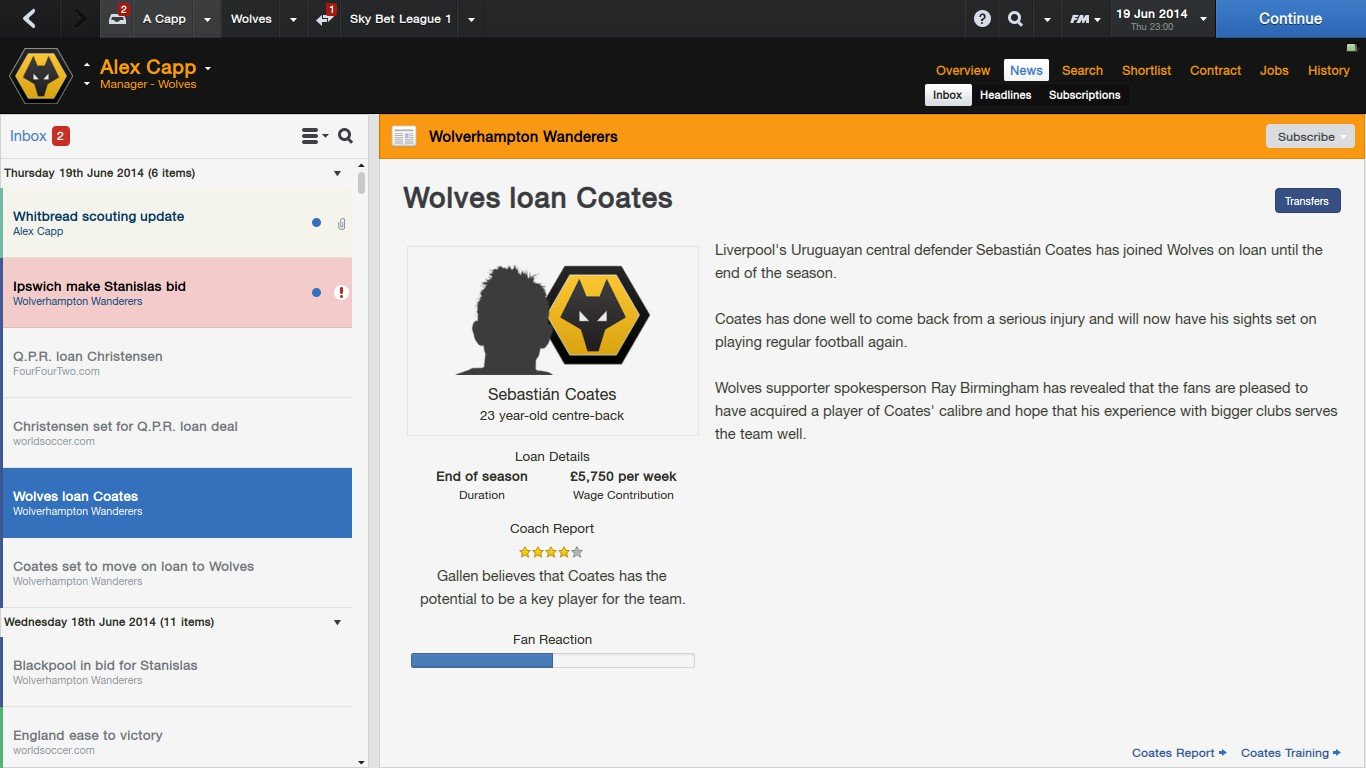 Sebastian Coates has been brought in on loan to help out in covering the central defensive duties with the other players in the team, with the lan signing now staying at the club for the whole season.
Login to Quote

Fans Award Sako with their Award 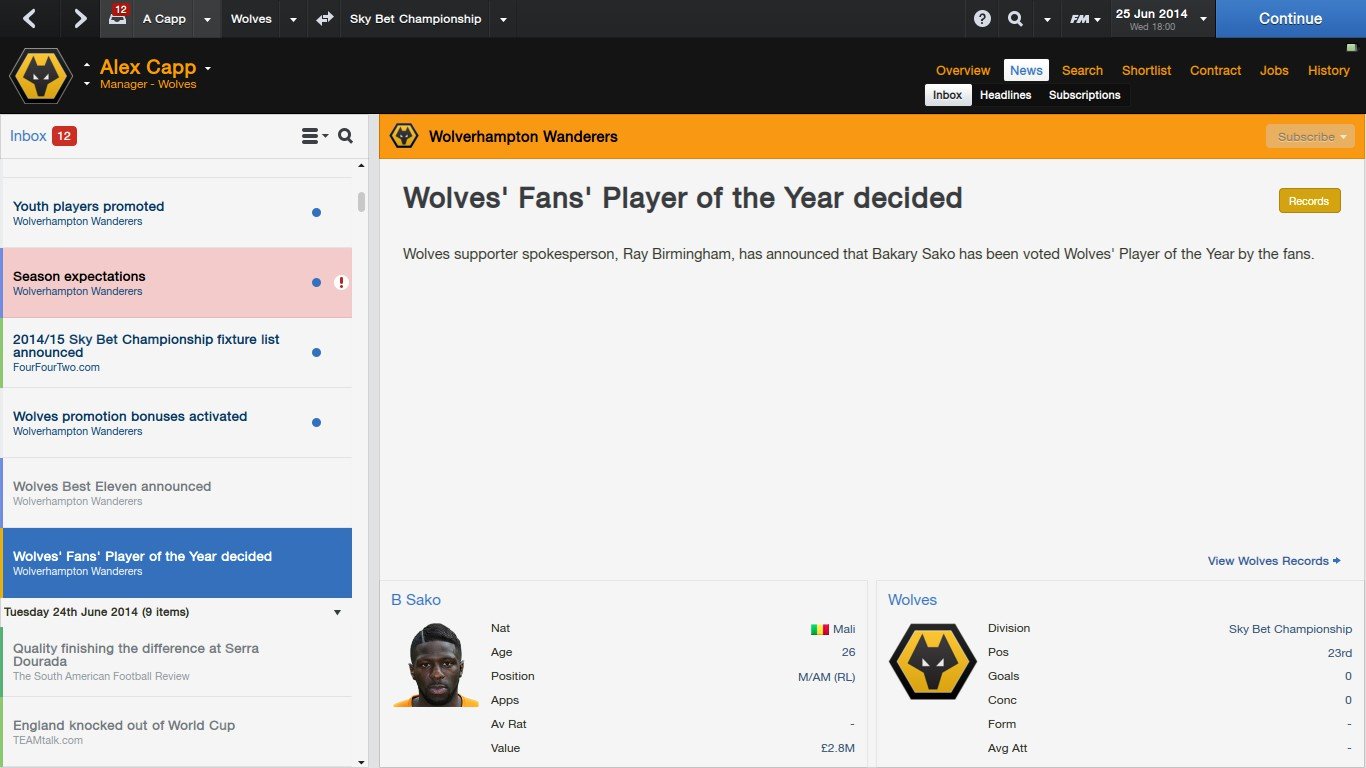 Capp has given out his intial thoughts to the team and expectations for the coming season.

The Team
I will be looking to keep the team together if possible but I will understand if a player wants to leave. I will be looking at bringing in some more youth players to the club and develop out own youth players rather than going out to buy players. The signing's I have made already this season where necessary as to youth and cover for key positions.

Budgets and Targets
I have been given a transfer kitty of £4.5million with a wage budget of 500k per week. I will not look to spend all of this but to make money and to look at youth rather than experience.

I know I said about getting a top half finish and I still fully believe we can get that but the board do not want to put a lot of pressure on me and the lads. The board have told me to avoid relegation but my backroom staff and the lads all think we can do better than this and get a mid-table finish pushing top half. I have told the board that and they are happy with the way not only the Lads but myself and my coaching staff have reacted as well.

Philosiphies
My football philosiphies and formation will not be changing from last season the lads have got the formation down to a T and the philosiphy is coming along nicely with the new signings intergrating well with the team and the lads who where here last season helping out wherever they can possible.

There is a great togetherness at the club and we are all working to help each other, the board are supportive of our work, my backroom team always keep me updated and the lads are always happy and laughing, with them coming to me or Joe if they have a problem. I am really enjoying my time here and I want to help these lads get back into the Premier League by seeing what I see every day they deserve it
Login to Quote

League 1 is a breeze with the right team

I am very pleased with our preseason with no losses and strong performances from Ismail and Ings both really impressing me. I am looking forward to the new season as the lads are prepared and are raring to go.

Siegrist comes up to Molinuex Wloves Carry on from where they left off

Everyone at Wolverhampton Wanderers can be extremely happy with August as they have carried their form from last season into this season with an unbeaten month. We hear from Capp on this past month.

I am proud of the lads they all performed really well an all showed that they are better than what people are giving to them. My man of the month has to be Ings he played out of his skin every timed he played scoring 5 goals and getting 4 assist's. Our best performances have to be against Crystal Palace and Aston Villa, bad games have to against Leeds and Barnsley. The Leeds game we went 1 nil down then scored 3 but let 2 in during the last 5 minutes, the Barnsley game we where 3 nil up at half time MacDonald was sent off and we let in 2 goals straight away. In the Capital One Cup we have been drawn against Totternham at White Hart Lane in the 3rd round it will be difficult but we are capable of mixing it up Capp wins Manager of the Month 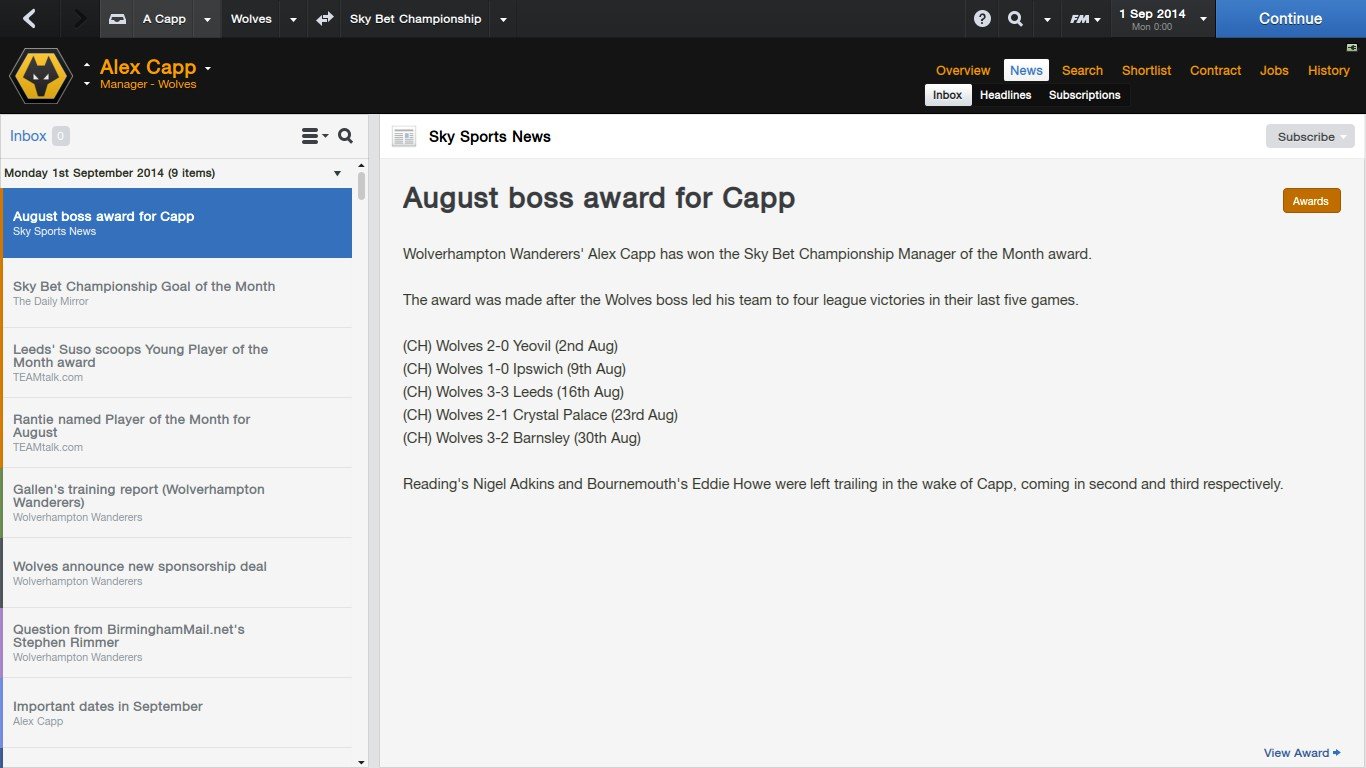 Capp and Wolves have amazed many people with there performances in the opening month of the League but it is deserved for their performances.
Login to Quote 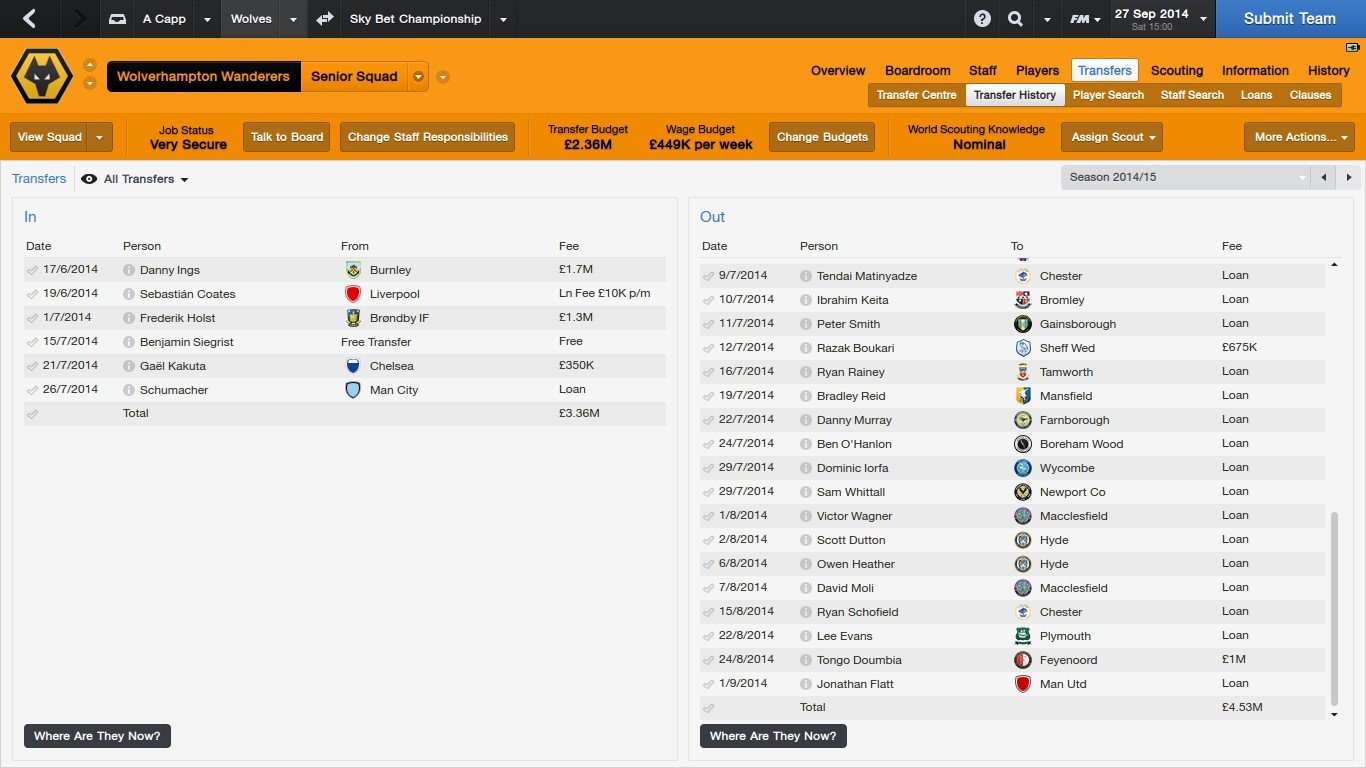 September comes to a close

September comes to a close with Wolves with them performing well and challenging strong teams much above their weight. Capp had this to say:

I am pleased with the lads they have played some tough teams and got some positive results. Totternham knokced the stuffing out of us a bit but we did not lose complete momentum a we gained two draws afterwards. I have to give the Player of the Month to Danny Ings as he performed well again eading the line well, I could of chosen Ismail but Ings just tips it for me. Ings and Ismail claimed 2nd and 3rd respectively in the leagues Player of the Month award. You are reading "Wolves - Hunting the Top".