When I first started playing FM, and I was asked to set up a profile, I didn't know what to enter. I didn't want to use my own name. It seemed a bit boring. I also didn't want to spend ages thinking of something dynamic and witty. In a juvenile manner, and itching to get the game started for the first time, I entered the first name that somehow popped into my head, and it stuck ever since...

Former international footballer turned strict disciplinarian. Instils order and authority, whilst forging a siege mentality. No player is bigger than the club and no man is bigger than Van Bastard. Revered. Flamboyant. Stubborn.

Marco Van Bastard will be taking the hot seat at Capital underachievers, Hertha Berlin, who have been the victim of the Bundesliga yo-yo the past couple of seasons, but were led to promotion by Jos Luhukay. The infrastructure is in place for success, but Hertha's establishment as a top flight club has been a struggle in recent years. The mission is simply to consolidate security for the club, and discipline within.

Can Van Bastard instil stability before the Ultras are calling for his head?

Best of luck mate and welcome!
1
Login to Quote


Jos Luhukay was the centre of a cagey press conference, where he announced his immediate departure from the magagerial hotseat at Hertha.

"Details shall not be divulged, but both myself and the board are too far apart with our vision of the direction of this club"

Exclaimed Luhukay, 50, before holding his hands up, deflecting further questioning, and exited the press conference.

Hertha are amidst pre-season preparation, on course to battle their promotion to the top flight, 4 seasons of back to back relegation and promotions, but now find themselves managerless on the brink of tackling their first pre-season friendly away to 3.Liga strugglers Chemnitz FC.

The bookies have tipped Rene Meulensteen as the favourite, after being relieved of his first team coaching duties at Manchester United. Former Dutch international forward Marco Van Bastard is also believed to be in the frame.

Chairman Michael Preetz is expected to address the media within the next 7 days with news of Luhukay's successor.
Login to Quote


Former Manchester United first team coach, Rene Meulensteen, has cooled talk of a possible return to football at Hertha Berlin. The Dutchman denied any contact from the newly promoted Bundesliga outfit and has dismissed interest in the vacant position

Meulensteen, 49, stated “I know nothing of Hertha Berlin, and I have had no contact”

“It’s flattering to be linked with such opportunities, of course, but it has been a difficult few months since departing United, and also the difficulties I faced at Anzhi. I’ll be taking a welcome break for the foreseeable future”

Fellow Dutchman and former Netherlands international forward, Marco van Bastard has entered the fray as Jos Luhukay’s successor at Die Blau-Weißen and has been touted as the new bookies favourite to take charge at the capital city club.

Van Bastard, 47, has been unemployed since his contract was mutually terminated with 3. Liga side Wehen Wiesbaden in June this year.
Login to Quote

“I am thrilled to announce the arrival of van Bastard. A former player of incredible stature will have a huge impact on everyone at the football club” Preetz announced.

Journalists present began to bombard Preetz with criticism of the appointment, citing both a streak of controversy and a lack of experience at the top level as detrimental.

“We made the decision with the awareness that van Bastard brings with him mostly playing experience over managerial, but the leadership he showed on the pitch is an excellent foundation to carry this club forward. His achievements as a player is something our squad can look up to and aim to emulate” Preetz responded.

Van Bastard experienced an 18 month stint as head coach of 3rd tier side Wehen Wiesbaden, where he was criticised by the Wehen supporters for his post-match comments on the final day of the season after a 4-0 home defeat to SV Elversberg. Van Bastard openly slated a number of his players as “spineless bottlers”; comments which were televised and ultimately acted as the catalyst for his mutual termination.

Today, Van Bastard opened to the media “I am delighted to be back and involved in German football. It is currently the strongest league in the world, and I’m itching to get started”

“What’s done is done. Hertha offers me a clean slate, and is a new chapter of my life. A new chapter for Hertha.”

No press conference with van Bastard would be complete without at least one questionable remark, and when asked if he regretted his actions at Wehen, van Bastard responded “No.”

“A win would have put us in the promotion playoffs. It was routine. We were playing a mid table side with nothing to play for, on our own patch. They let the football club down. But it is in the past. I no longer think of Wehen”

Fans invaded the pitch of the Olympiastadion at the full time whistle of Hertha's first home game of pre-season. Despite an impressive 2-1 victory over Switzerland's BSC Young Boys, Hertha fans made their way onto the pitch, in attempt to attack van Bastard and members of his backroom staff, who were safely ushered off the pitch by police.

A spokesman for DBWUA group has stated “This appointment casts a negative shadow over our club”.

“He brings with him unpredictability. He has shown both on and off the pitch that he is malevolent, volatile and reckless”

“Jos Luhukay earned us promotion, whilst promoting young, exciting Hertha U19s into the first team, and focused on the recruitment of young German players.”

"Van Bastard is not the man we want!"

The DBWUA group have demanded to meet with Michael Preetz to discuss this appointment, and their belief that it is damaging to the reputation and philosophies of the club.
Login to Quote

Louis O.
7 years
This is a great story btw, and a German story too

http://i46.photobucket.com/albums/f102/moshforjesus/pre-season_zps7c658c67.jpg
Van Bastard will surely consider his four wins, two draws and a loss a promising beginning. The singular loss came against a strong Norwich City outfit. A game which was settled by two Robert Snodgrass set pieces, and an own goal, despite Hertha having the majority of possession and creating more chances.

Van Bastard may rue the fouls made in dangerous positions which cost him the game, though he was coy on such admission in his post match interview
"I expect all my players to play hard, and do not expect opposing players to walk through our shape. This will mean we concede fouls, but we physically impose ourselves on the game, and hopefully get the psychological advantage. I want our opponents to fear us"

http://i46.photobucket.com/albums/f102/moshforjesus/budget_zps100bd9d8.jpg
The club has set the expectation of a secure finish, though if van Bastard wishes to make this team his own, he will have to sell to buy. 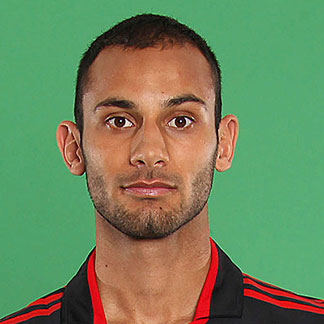 With the limited finances available to van Bastard, the Dutchman has pulled through the most promising youngsters from Hertha's U19 set up, and have been granted professional contracts.

Van Bastard will predictably favour a 4-3-3/4-5-1 hybrid, with ball winners in the middle, laborious wide men who will press all over the pitch, and a lone striker. Hertha's squad lacks individual match winners, so you would imagine they will try to keep the ball as much as possible to keep it off the opposition, playing a patient tempo to grind down an opening. When off the ball, you would expect Hertha to remain very compact and resolute, being difficult to break down. I would predict this to be one of Van Bastard's strongest starting 11s, whilst bleeding in promoted young talent:
http://i46.photobucket.com/albums/f102/moshforjesus/team_zps5f2f209b.jpg

With pre-season out of the way, van Bastard will tackle the first round proper of the DFB-Pokal against Neustrelitz before the Bundesliga kicks off. Van Bastard will have all eyes on security in the top flight, but he would be naive to completely write off his chances in the Pokal. Anything can happen in cup football.
Login to Quote

Slid3Tackle
7 years
Very good updates! Keep it up! On fm 12 I had a great career at Herta, I will follow this!
1
Login to Quote

MVB
7 years
Thankyou for the kind words so far gents. You're all too kind. I'm a total novice, but there's some excellent narrators on here to take a little inspiration from.
Login to Quote

Excellent start, and welcome to the site. The writing itself is really good and Hertha is a club I have a bit of a soft spot for. Anyway, keep it up and keep this going, would really like to read more when I have the time.
1
Login to Quote

Jozef
7 years
Great updates mate, but I have won big issue.......You got rid of Ronny, waaaaaaaaaaaaaaaaaah.
1
Login to Quote

Haha, I did. He's already on the decline, on the advice of my trusty assistant, and was already placed in the reserves prior to my arrival. Going to give Mukhtar that position, to show me what he can do!
Login to Quote

You are reading "Hertha BSC - A cold, wet Tuesday night in die Hauptstadt".