OFFICIAL: STOCKPORT COUNTY LINK WITH NORTHAMPTON TOWN
We are delighted to announce that we have made an official link with League 2 side Northampton Town. The link will see Stockport County receive a total of 13k annually and have the first pick on loaning players from the club.

Manager Josh Slater had this to say about the link:

"I am very pleased to have linked up with Northampton Town. Both me and Adrian Boothroyd (Northampton's Manager) hope that this link will help both clubs in the future and we hope to have a long, successful affiliation with each other."

November Update
At the start of November we were sitting in 1st place and on a high after winning all four games in October.

And our form continues! We are now undefeated in 10 games and have won 9 of those! To begin with a solid 2-1 win over Histon in the cup was brilliant, as we really would like to qualify for the FA Cup.
The next two games against Oxford and AFC Telford were magnificent, as they were two teams who were predicted to finish higher than us. The pick of the results has to be away at Chester, we were the better team and could have scored 5 or 6. Overall a great month and lets hope our form can keep continuing in this way.

Player of the Month
Kristian Dennis

http://www.stockportcounty.com/cms_images/player/dennis1243-980938_231x264.jpg
Great month for Dennis, scoring 3 goals in the six matches played, not only his goals, but his contribution to team also a huge factor for him winning this award. 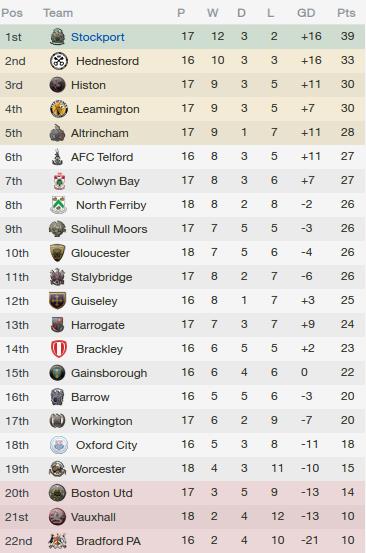 6 points clear at the top! We're doing amazing and are exceeding the expectations set for us at the start of the season!
Login to Quote


Thanks alot! Just wish county were like this in real life lol.
Login to Quote

After a very successful start to the season, new man Josh Slater took time out to take part in an interview for Stockport County TV:

Welcome, Josh, How are you today?

Very well thanks. And yourself?

Great thank you. So Josh, let us begin, right from the start, did you ever dream of becoming a football manager? or was their other things down the line which you wanted to achieve?

Well, when I was younger I used to go to lots of County home games as they were my local team, and at that point, yes, I dreamt of taking Stockport County to glory, but I knew that it was highly unlikely that the dream would become true, and to my amazement, it did.

Very interesting, before you became Stockport County manager, did you study for any coaching licenses?

Yes, I did as there was a possibility that an amateur club in my area was looking for a manager, and having played managerial games in the past, I decided to take that next step and try to get that job, but to do so, I needed to study for a license, which was what I did.

As you said, their was an amateur club which you were interested in managing, why didn't you take that job?

Well, at the time, I was close to finishing my course and getting my coaching license, however when I did achieve my license, the position at Stockport was vacant, so I decided to try my luck, and as it happened, I got the job.

Okay, moving on from that, what was it like when you managed your first game?

Nerve-racking to say the least, I wanted to get a good result as at that point, some fans didn't trust me and doubted my ability, so I wanted to win that match to show I mean business.

Who would you say has been the stand-out player in your squad?

Hard choice, can't I choose them all? Haha, well I think that Phil Jevons has proven why he is so prolific upfront for us, backed up by the amount of goals he has scored for us already this season, I'd have to choose him.


Thank you Josh for your time, good luck next game!

MCFCDAP
8 years
Dont come on here that much anymore, but saw your story as I live about 5 mins from Edgeley Park!

Been a great start and hope you can keep it up! County are far too big to be playing in that division and deserve at least League 2 or maybe even 1!

Been a great start and hope you can keep it up! County are far too big to be playing in that division and deserve at least League 2 or maybe even 1!

Keep up the good work as boss and with the story


Thanks man! Yeah I agree with you, I hope that we somehow get back up into league 2 but as things stand, we'll be lucky to escape relegation for the 3rd time in a row.
Login to Quote

December Update
Coming into the Christmas period, we were cruising at the top of the league, unbeaten since early October, we hoped that our form would continue onto and beyond the new year.

And our unbeaten run extends to 16 games! Again, great month for us, except the draw against Workington, the rest of the games we played very well and look favourites to go on and win the title.

http://i3.manchestereveningnews.co.uk/incoming/article6274563.ece/ALTERNATES/s615/ryan-jones-6274563.jpg
Ryan has been terrific this month, helping us secure lots of victories and getting 3 clean sheets in the 6 games played this month. 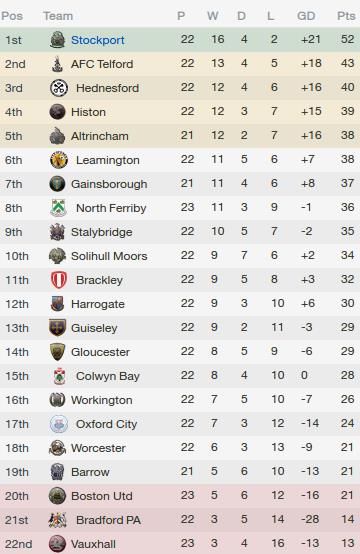 9 points clear at the top! Highest goal difference too, lets hope we keep our good form and win the league with games to spare.
Login to Quote

http://www.thenonleaguefootballpaper.com/wp-content/uploads/2013/08/The-Skrill-North-logo-stacked-RGB.jpg
New year award for Stockport boss
The manager of Stockport County will have a new year to remember as he was presented with a second manager of the month award.
Josh Slater, 26, is enjoying his first spell of management at the top of the Skrill North with a healthy 9 point gap between AFC Telford.
Fans of The Hatters have spoken about how delighted they are with Slater's progress and are pleased that he was won the award.
One fan had this to say about Josh Slater:

"At the start of the season I was one of doubters about Slater, as I did not believe in his managerial skills, but he has proven me wrong and deserves the award as he's been magnificent with both league and cup form."

We also interviewed assistant manager Alan Lord about Josh Slater, he had this to say:

"Josh has completely changed this club around, when Ian Bogie resigned we were in an extremely bad state, the players did not believe in themselves and we all were dreading the start of the season, however when Josh was appointed his encouragement and range of ideas lifted the mood and due to that he's got us into a great position in the league."

http://footballandmusic.co.uk/wp-content/uploads/2007/10/dazsampson1.jpg
Fans praise Josh Slater for the work he has done.
Login to Quote

Going into January, we were sitting in 1st place with a healthy gap between us and AFC Telford, this month was vital as if we win all our games, the title and promotion is destined to be ours...

It was a okay month, yes we lost two games, but overall we played good football. The result at Gainsborough was disappointing, we were outplayed in all areas and when we did create chances, we wasted them. Good result against Vauxhall and a draw against Alfreton at home was great, but we couldn't win the replay away at Alfreton's ground. Then two decent wins put us a a good position going into the final few months.

Phil Jevons
http://www.stockportcounty.com/cms_images/player/jevons743-980932_231x264.jpg
Again, our veteran striker and club captain showed us why he is so prolific as he scored 5 goals in the 7 games played this month.

Won it again! My 3rd time of winning this award and hopefully another one will be in my cabinet next month! 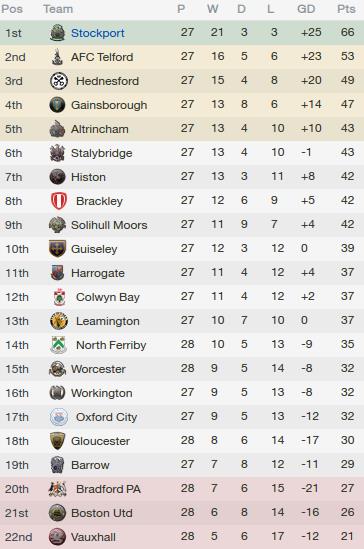 Now 13 points clear, amazing! The title looks destined for us but we can't get complacent now, this next month may determine who wins the title and promotion.
Login to Quote

Top of the league at the start of February, can we keep up this form until the end of the season?

Undefeated this month, very exciting match away at Worcester, and then 3 games with no goals conceded. As much as we only got 7 out of 12 points, it's helped us secure a good place at the top of the table.

Phil Jevons
http://www.stockportcounty.com/cms_images/player/jevons743-980932_231x264.jpg
He can't stop scoring! Scored 2 this month and is in fine form!
Login to Quote

bebero
8 years
You have a pretty good advance, try not to make missteps.
Login to Quote

March Update
We are so close now, just a few games away from winning promotion to the Skrill Premier.. We just need to make sure we are not complacent through-out this month...

Undefeated yet again this month, nothing to really worry about from these results, not too happy with drawing 3 winnable games but overall 12 points out of a possible 18 in a congested month of fixtures is very good. 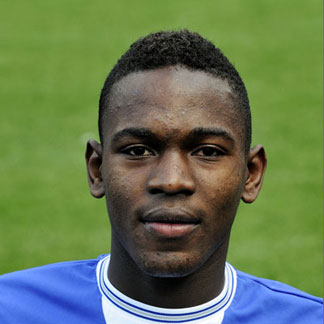 Snapped up this lad a couple of months ago on a free transfer, and this month he has been solid at the back and has got two very important goals to either draw level or win a game. 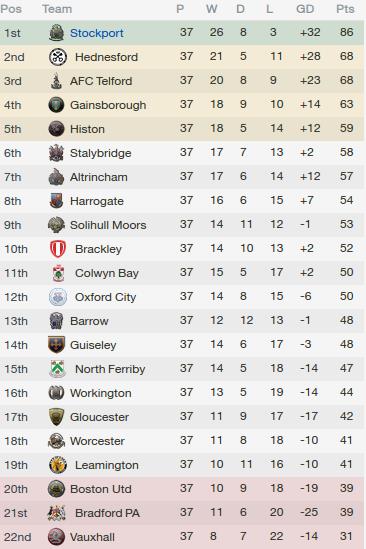 Sat at the top still with a 18 point difference between us and Hednesford, however is it enough to win the league...?
Login to Quote 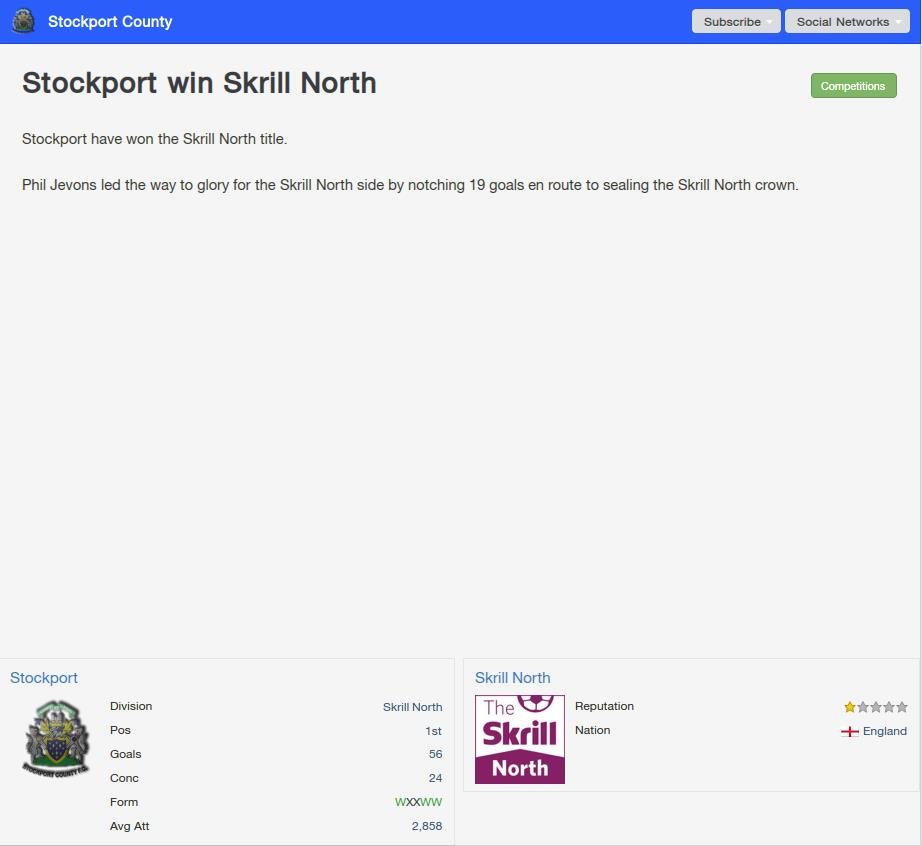 We've done it! We've won the title with almost a full months fixtures left to play!
The lads were magnificent this season, showing why we deserve to be in a higher league.

Phil Jevons was the highest goal scorer with 19 league goals, with Kristian Dennis coming shortly behind with 12 goals.

James Tunnicliffe impressed me the most this season, his defensive qualities and attitude put in a string of good performances and even got 4 goals this season.
Login to Quote

You are reading "Stockport County - A New Era".