First of all I'll apologize for any misspells etc. I'm from Denmark, so English is not my native language

Football Manager 2014... You were one tough bitch to crack! Like some/many of you I've had trouble finding a tactic that worked great for me in this years game. Until now.
Before i made my version 4-1-2-2-1 I had tried pretty much anything, a flat 4-5-1 being the formation I had the most success with. However, it was defensive minded and my Nottingham Forest team was not playing as I wanted. In Football Manager 2013 I had great sucess with a 4-2-3-1 (no wingers - three AMC's) that outplayed any opposition. Trying that in 2014 was no success at all though. The AMC's were - no matter the role I gave them, not acting like in 2013. I also tried the much used 4-1-2-2-1 and 4-2-3-1 with wingers, but it was not working great for me, same with various other tactics.

In the beginning of my 5'th season with Nottingham Forest I started experimenting further, and I finally found a tactic that worked amazing for me. I went from mid table to first place and won the Premier League, Europa League and F.A. Cup titles. And it pretty much came out of nothing and with a squard of mostly 18-20 year olds (Pretty awesome ones though). The playing style is somewhat like what Arsenal is doing at the moment. Fast-paced passing game with the full backs joining the attack and a lot of off the ball runs around the box.

Here's my tactic that made everything awesome.

This is how it looks. 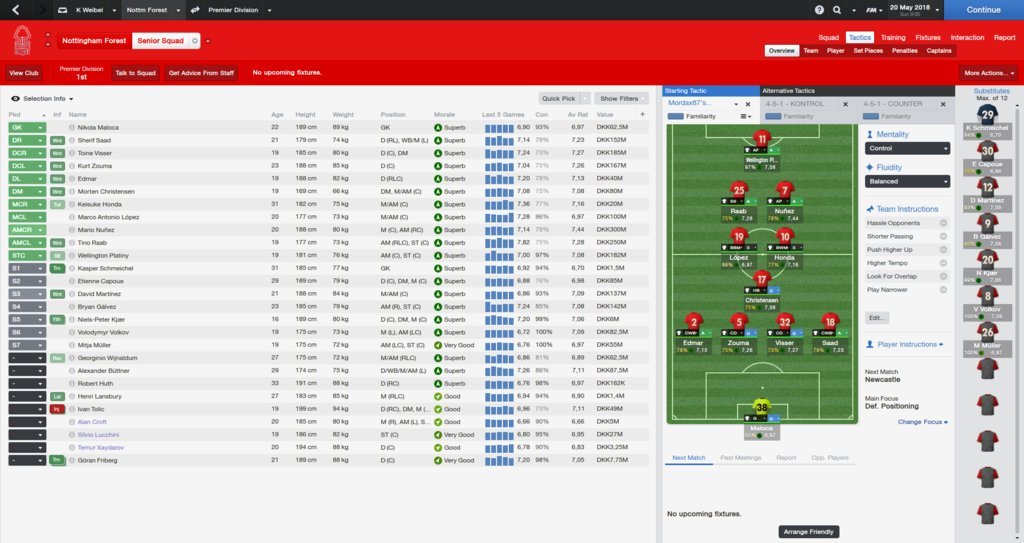 Now I'll shortly go through the individual positions, instructions and roles and then how it plays (with a few youtube-links to goals).

The defense:
These are the dudes who keep the opponent from scoring and sometimes push forward to create width in an otherwise narrow formation.

Goalkeeper
- Pretty standard. His only personal instruction is "Distribute to defenders" to keep possession.

The two CWBs on either side
- The offensive minded back joins the attack on every occasion. They're very important for this otherwise narrow formation. His personal instructions are "Cross from deep" to avoid him having a too long run back and "Cross more often" because of the amount of people in the box and a high crossing stat.

The two CB/LCBs
- This could be whatever suits your player best. His job is to simply... defend. The only personal instruction is "Mark tightly"

The midfield:
These are the dudes who supports both defense and attack.

Halfback
- Now this one is interesting and vital for this formation. Because of the very offensive minded CWBs there's a need for more defensive cover whenever the team attacks. Added to that he also - of course - contributes as almost a fifth defender when the team defends. The halfback is amazing for this formation, because he acts as a third defender as the two CWBs move forward. As the description says he's kind of an aggressive sweeper. This role has been working exceptionally well for me in this formation. Personal instruction: Pass it shorter.

BBM
- One of the two CMs. With his role he supports in both defense and attack. Often joins in with the two AMCs when attacking and takes some nice runs to confuse the defense.

BWM(S)
- Another one who supports in both defense and attack. Doesn't go as much forward as the BBM, but creates a nice synergy with the other roles.

The offensive midfield/attack
These are the dudes that scores your goals and create chaos.

AP(A)
- The teams main creative force. Acts as a playmaker and makes runs into the box. There's potentially quite a few goals and assists here. Personal instruction: "Roam from position" - to create his own space and make the formation more fluid.

SS
- In many ways a striker, but also an assist-maker and big part of the build up play. Has "Roam from position" and "More risky passes" to create those golden opportunities for all the players joining the attack.

AF (ideally. Other roles will work too)
- The teams main goalscorer. Has "Move into channels" to easier find space for himself.

Some video-highlights
So how does it all play out? I've uploaded four videos to youtube for you to check out.

There's a lot of movement going on in this tactic. The CWBs joins the attack and are able to both cross and score. The halfback pulls back and helps the defenders. The two CMs supports the attack and annoys the opponents when defending and the three front men create chaos with a lot of runs and fast passes.

But what about the results?
I started to use this in my fifth season after a bad start. The season before this I ended in 7'th place, best result yet, but far behind the top teams. When I began to use this tactic I went from mid table to winning the league, the Europa League and the FA Cup with entertaining, fast football.

I started using the tactic after a defeat to Aston Villa. The first match in the screenshot is the first match with my new tactic. 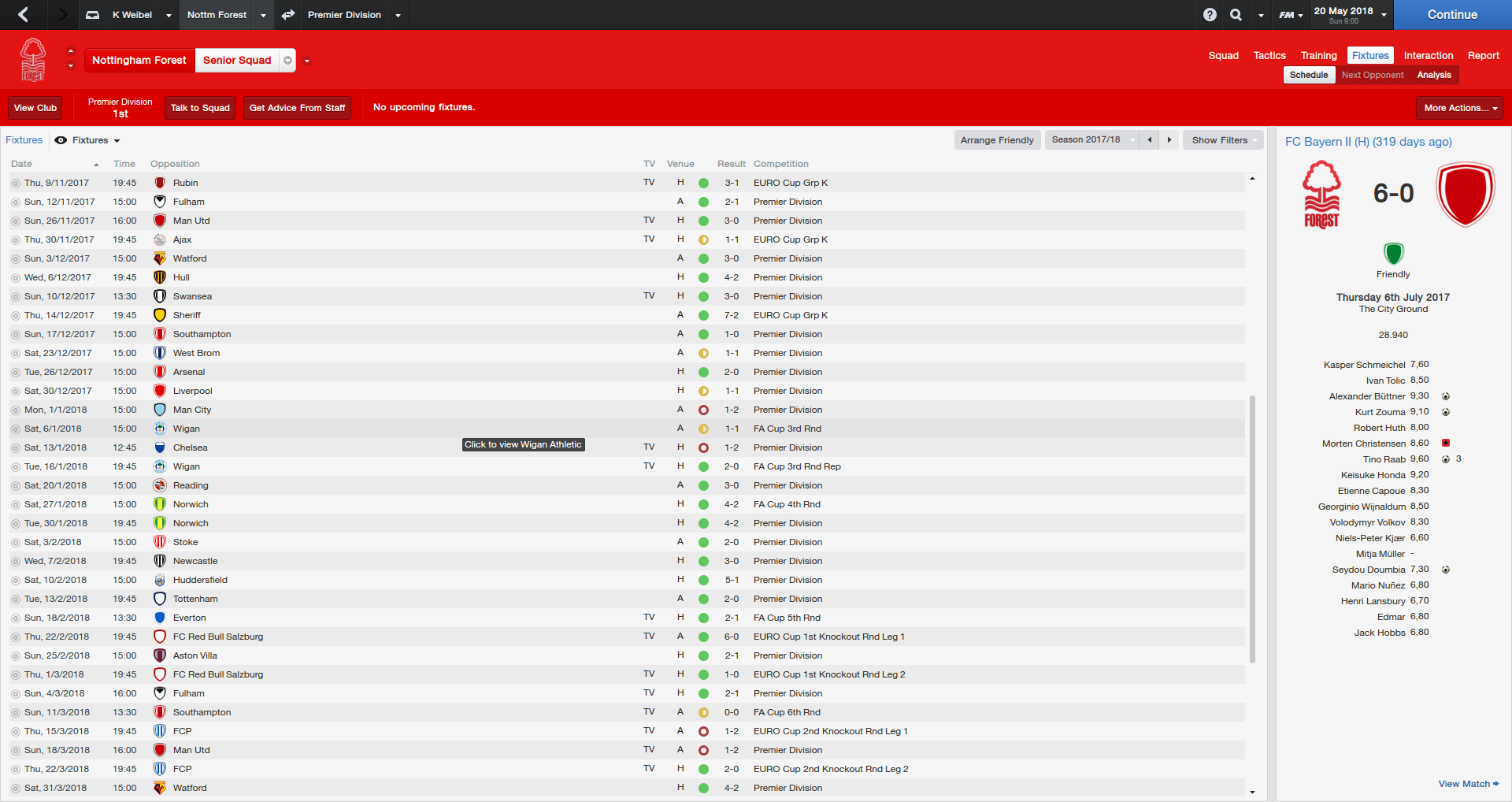 This continues from the SS above - rest of the games are from the match against Watford: 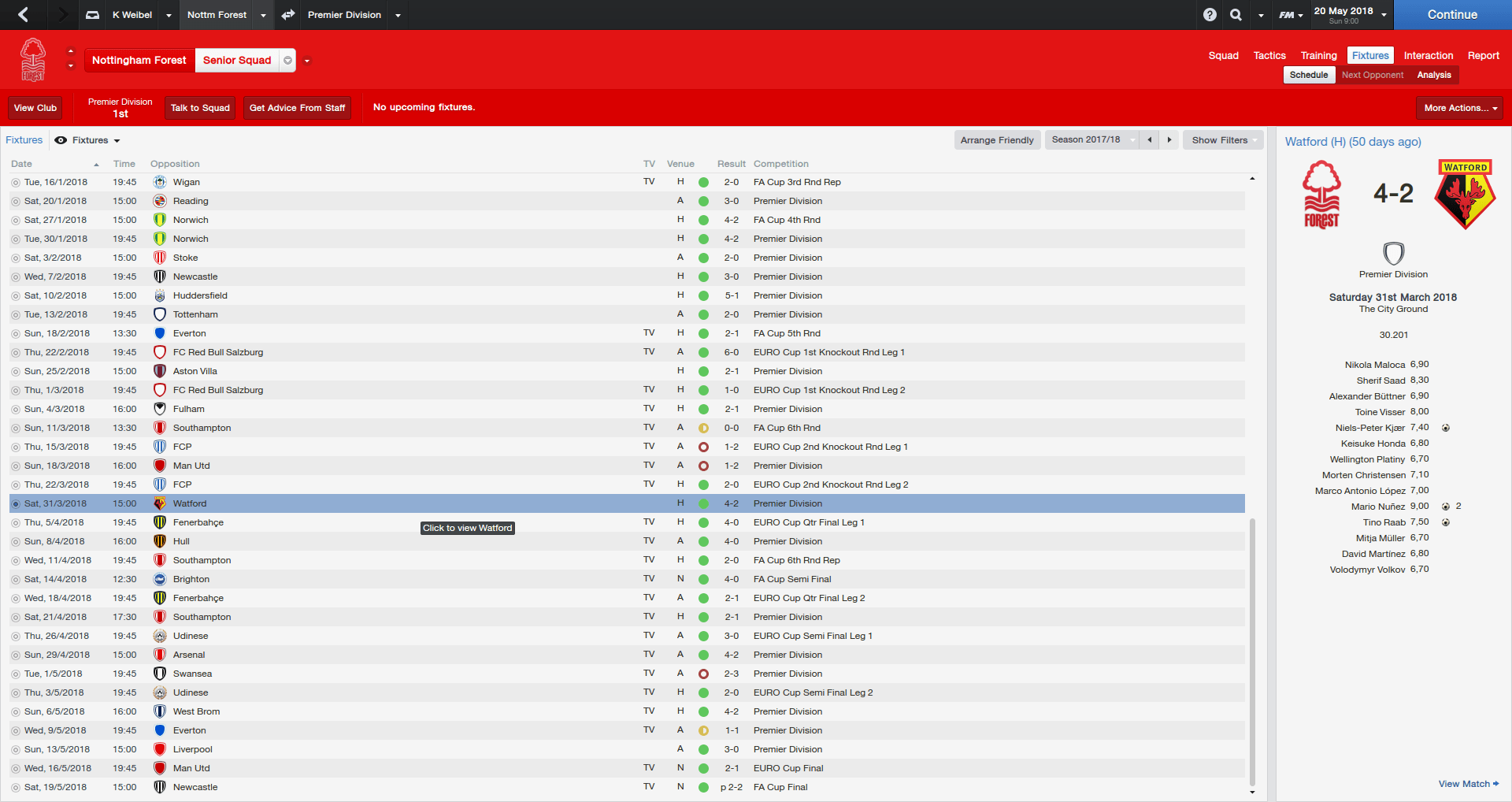 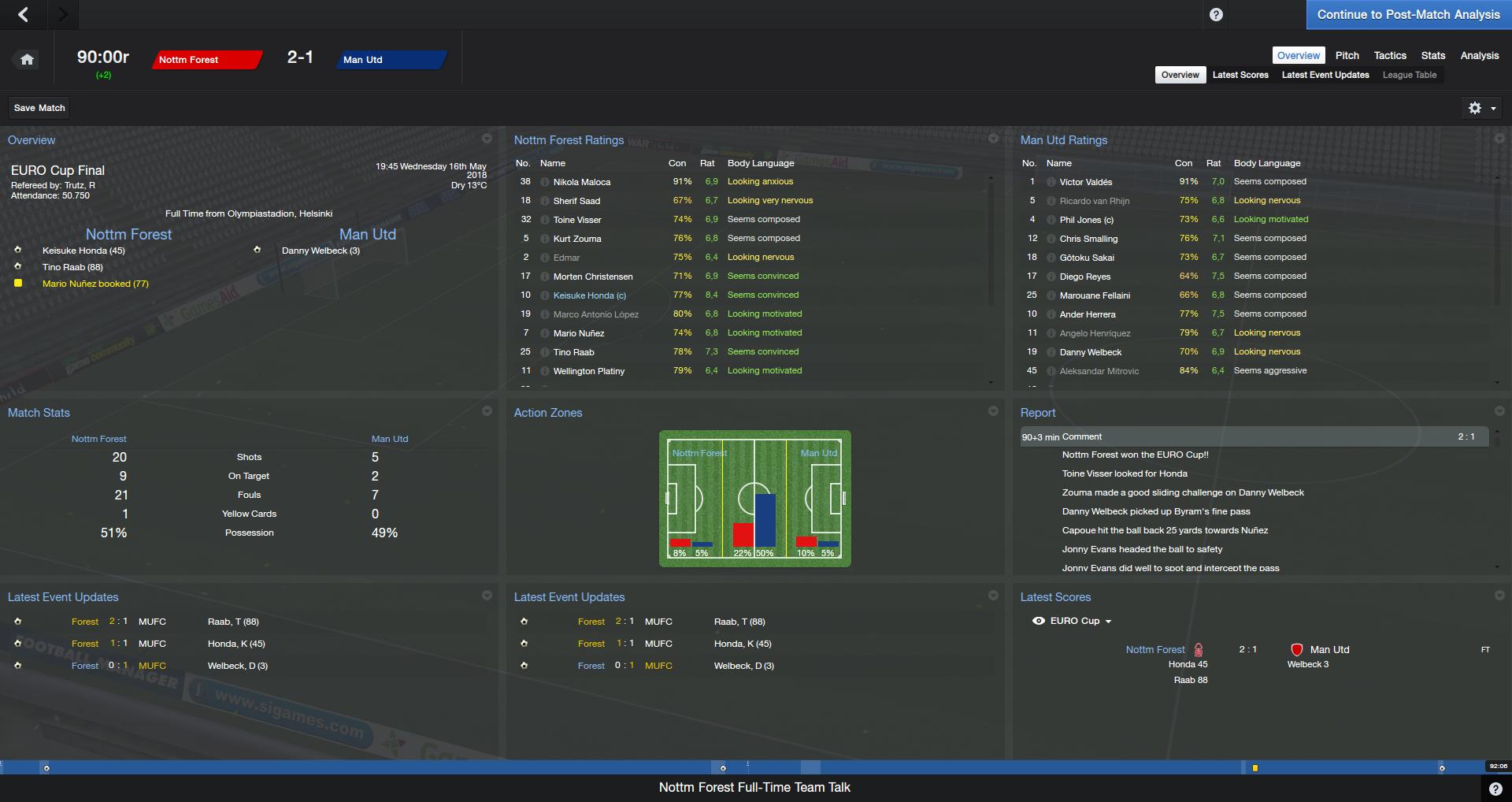 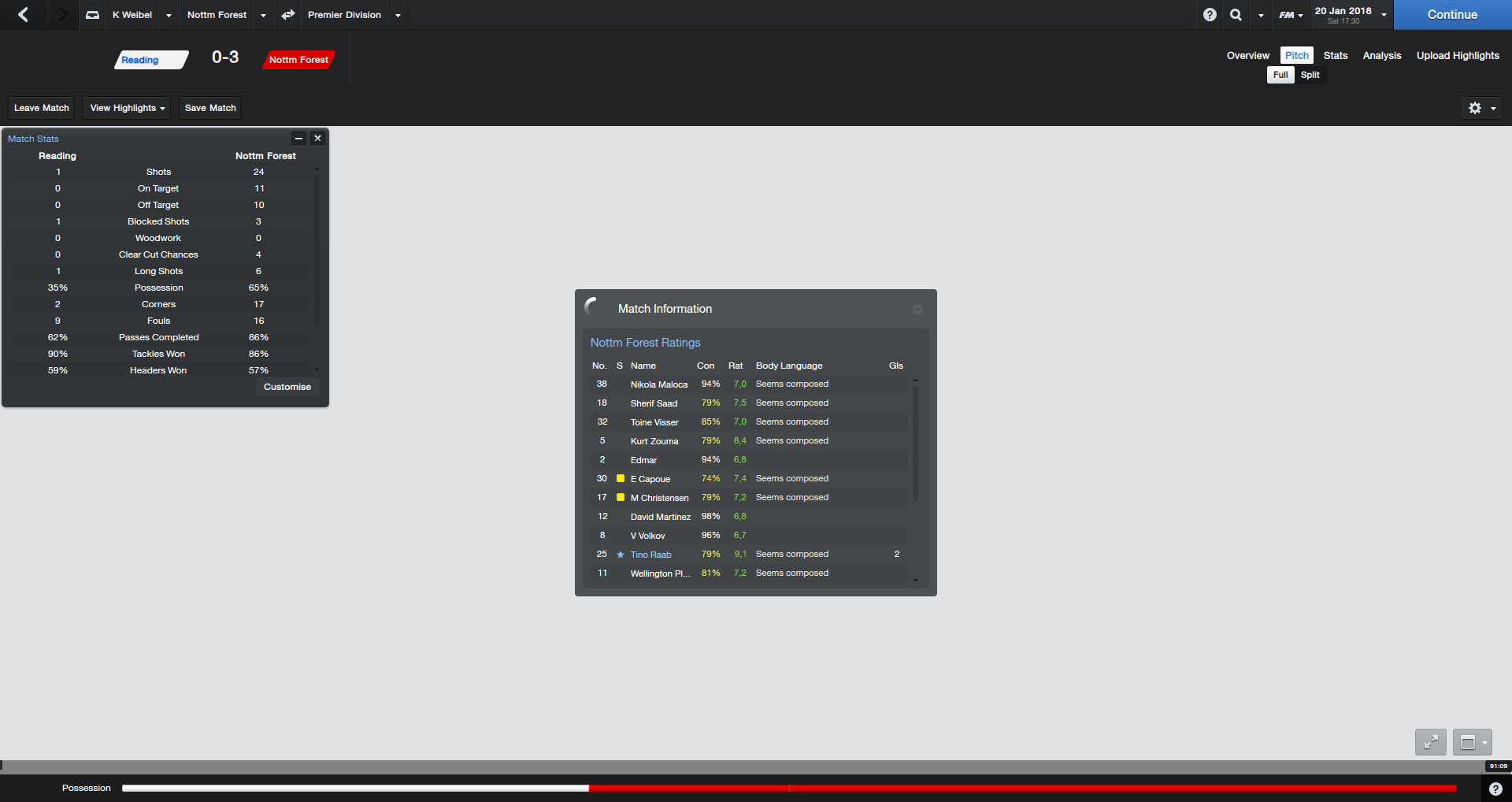 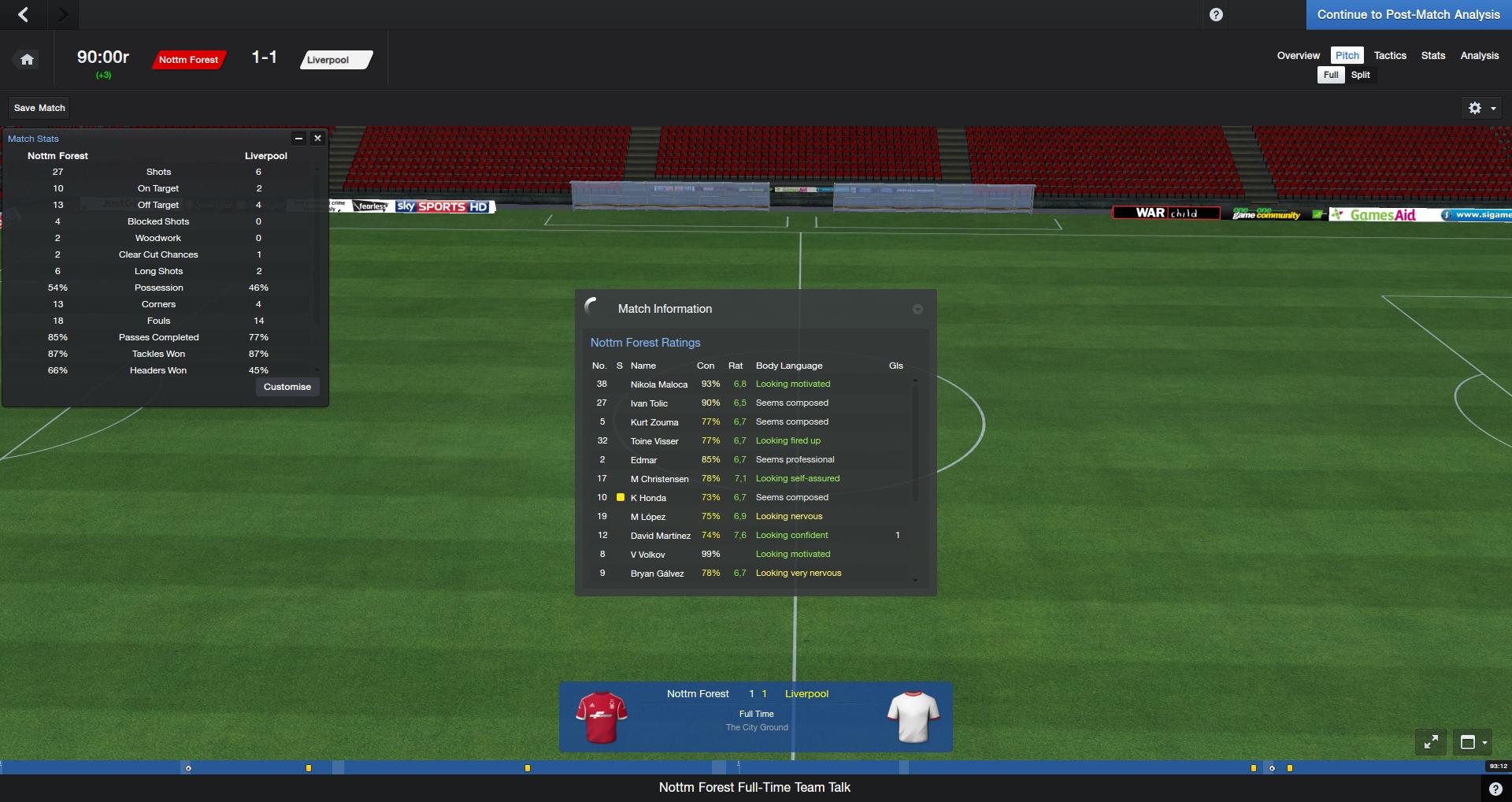 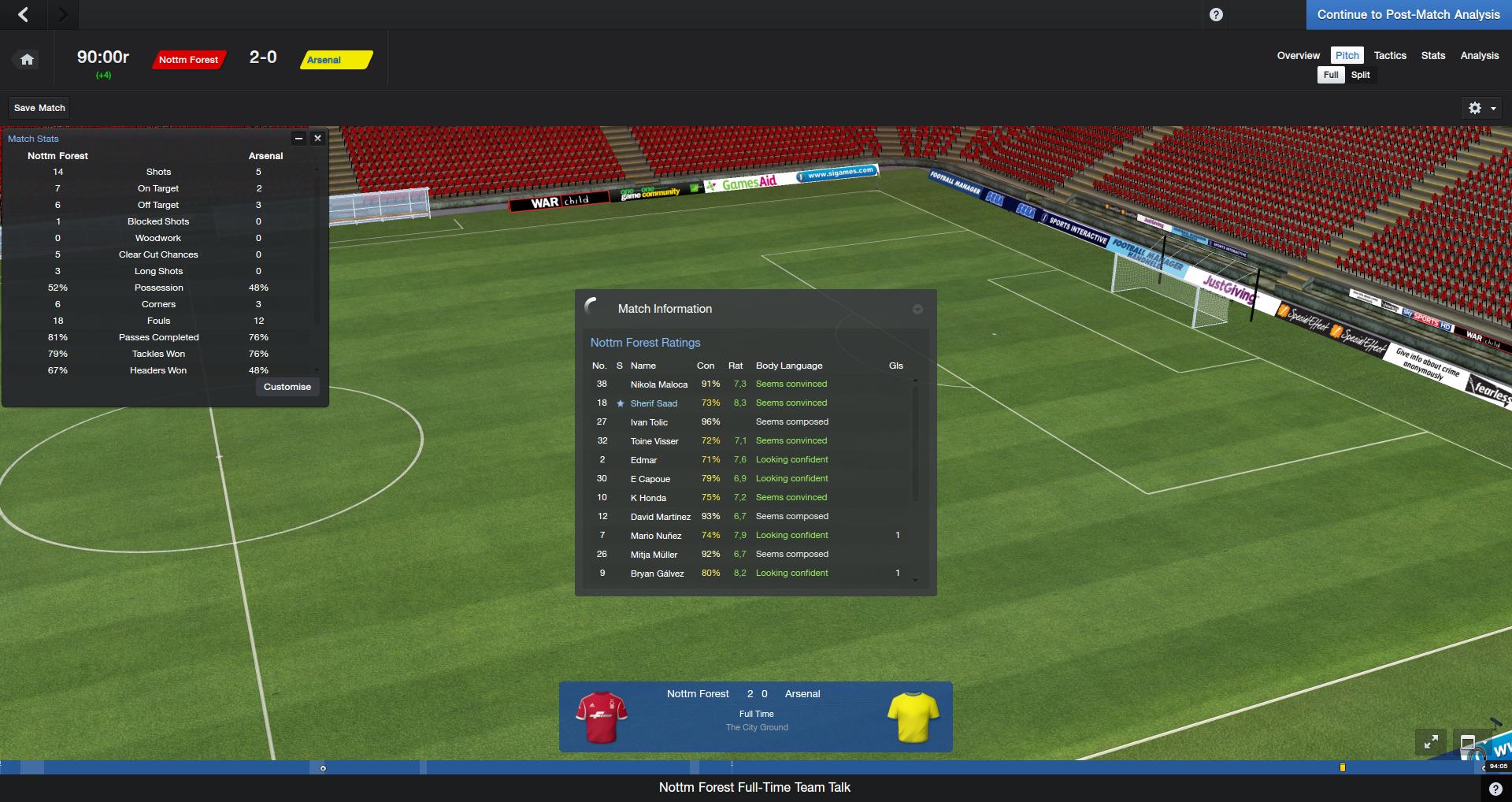 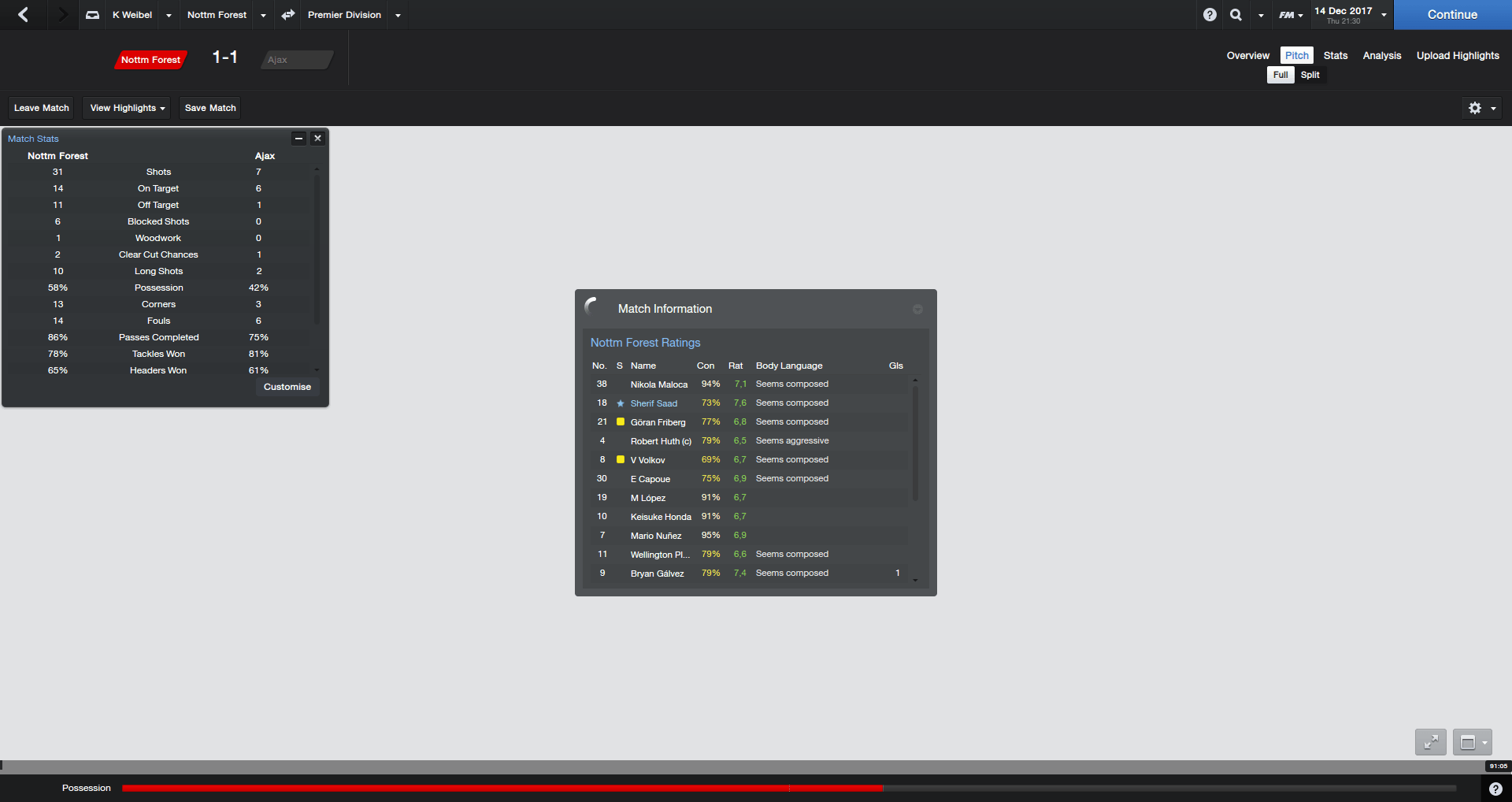 This is the tactic I've had - by far - the most success with in Football Manager 2014. I hope you do as well.

stubeetle
7 years
This tactic is sensational. After success in fm12 and fm13 with flat 4-5-1's I continued in this game but really struggled this time around and even got sacked for the first time since FM07.

Basically I have lost time and can no longer look into the new roles in great detail.

Tried a few tactics on here and this has been the best BY A MILE. This plays the kind of footy I like. Wing backs up front shooting and getting loads of assists. Goals come from a great majority of players. As I said usually use to my goals in a 4-5-1 coming from the main 4 players. This tactic sees all the 5 mids anf AF scoring with the CWB's chipping in regularly.

The only thing I have changed is the attacking corner set up. I still believe that aiming for the 6 yard box and attack near post gets you more goals but this is minor.

Honestly the best tactic I have played with. Thank you
Login to Quote

kumutunal
7 years
do you have any special idea on training?
Login to Quote