It had long been coming, the only question remaining was whether he would jump or be pushed. Mackay has received his P45 and will be watching football from his sofa rather than the dug out.


Club Owner Vincent Tan has come out and stated that Mr Mackay's public behaviour has made the situation untenable. He had this to say;
"There has been a good deal of publicity generated by and about Mr Malky Mackay over the last few months.

"Indeed far too much dirty linen has been exposed to the public gaze. But, I stress, not by me. Indeed, I have deliberately not responded to this, hoping that the club can be judged on its football rather than personalised arguments about who said what to whom.

"I have, however, regretfully concluded that it is no longer fair to the Club, its players, its fans, or the public more generally, for this uncomfortable state of affairs to continue. Cardiff City Football Club means far too much to us all for it to be distracted by this."


Protests which have become a regular occurrence at cardiff are predicted to escalate. 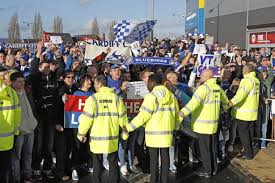 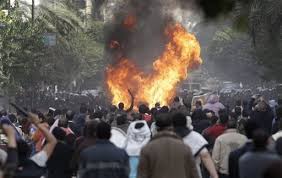 Bookmakers are reporting an large quantity of money being spent on who will replace Mackay at the helm of cardiff city. 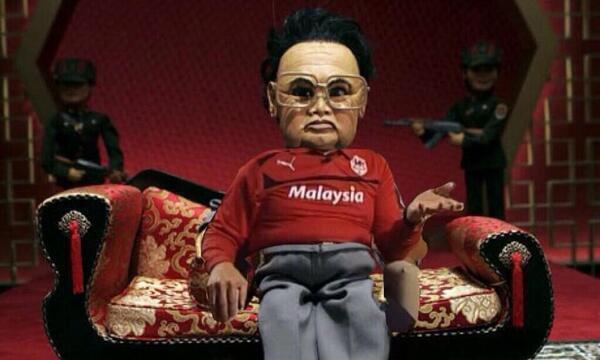 can you blame then?
1 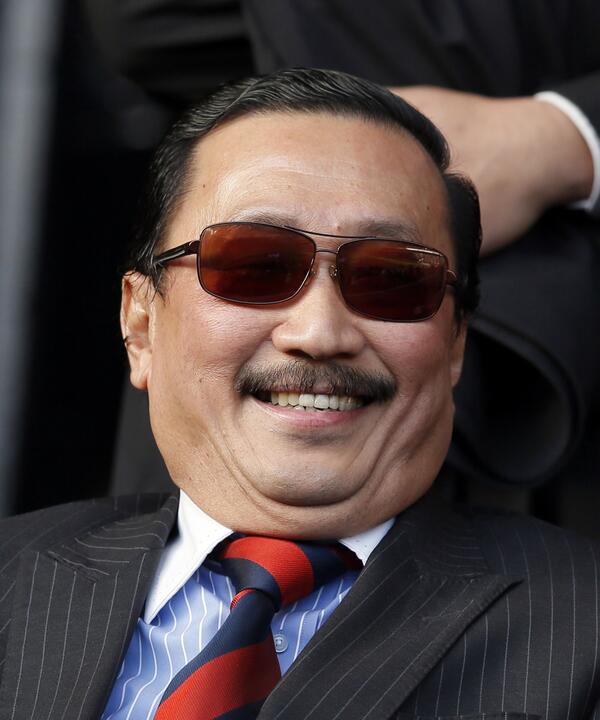 Wealthy owners have often been accused of playing football manager, toying with their teams, often to the anguish of their fans but on this day Vincent tan has gone further and appointed himself manager. 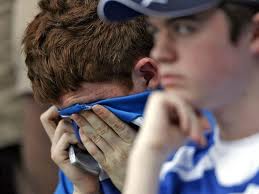 Tan has told the media that fans are overjoyed by the appointment of his magnificent self.

Tan believes he will get far more out of his team than his predecessor and will lead the club to great success.
1
Login to Quote

captainbrickarms
7 years
Tan Appoints Tan eh?, could see this happening in real life though as tan is a ****.
Good luck

Tans unhappiness with the coaching staff seems to extend far beyond former manager Mackay. The resulting cull has shocked some with an almost complete change in coaching staff and a largely foreign group coming in has brought a lot of negative reaction with claims of "here goes the British game" from some of the less creative media pundits.( looking at you messrs redknapp and carragher.


The Cull in its totality 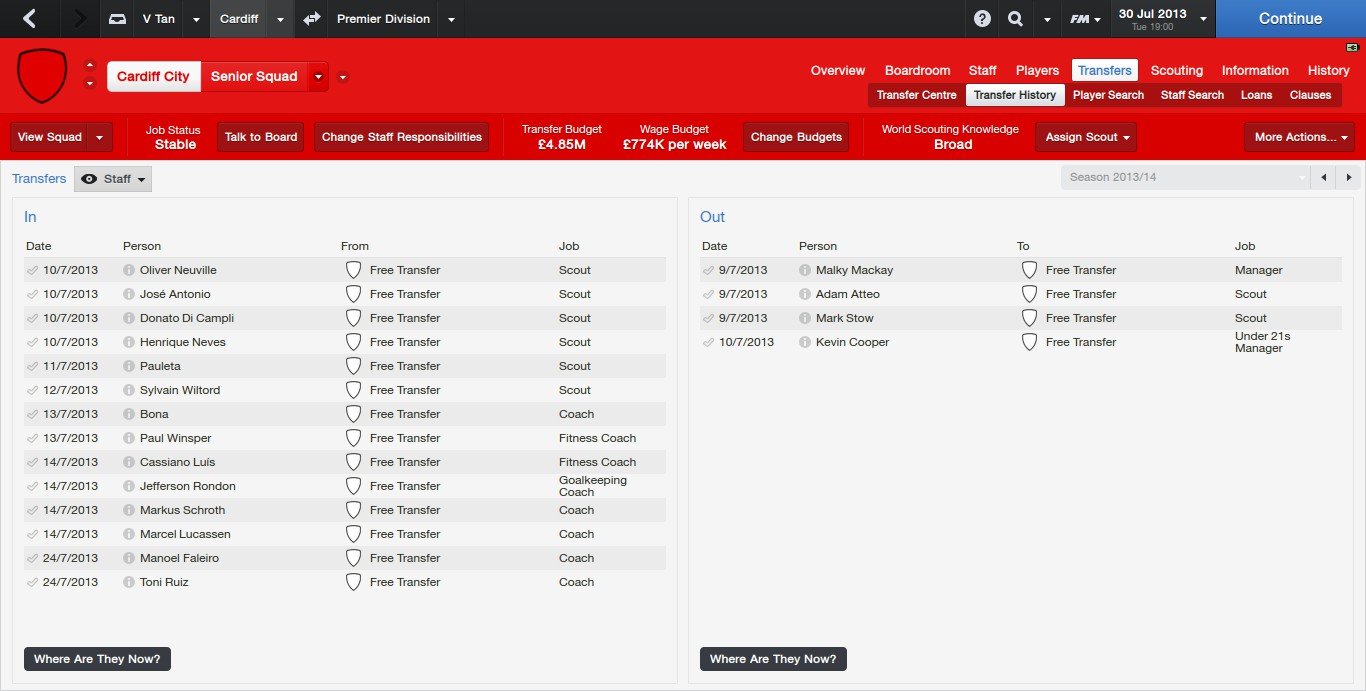 Tan has also wasted no time in the transfer market and has recruited heavily from foreign nations. How the fans will react to this remains to be seen.
Login to Quote 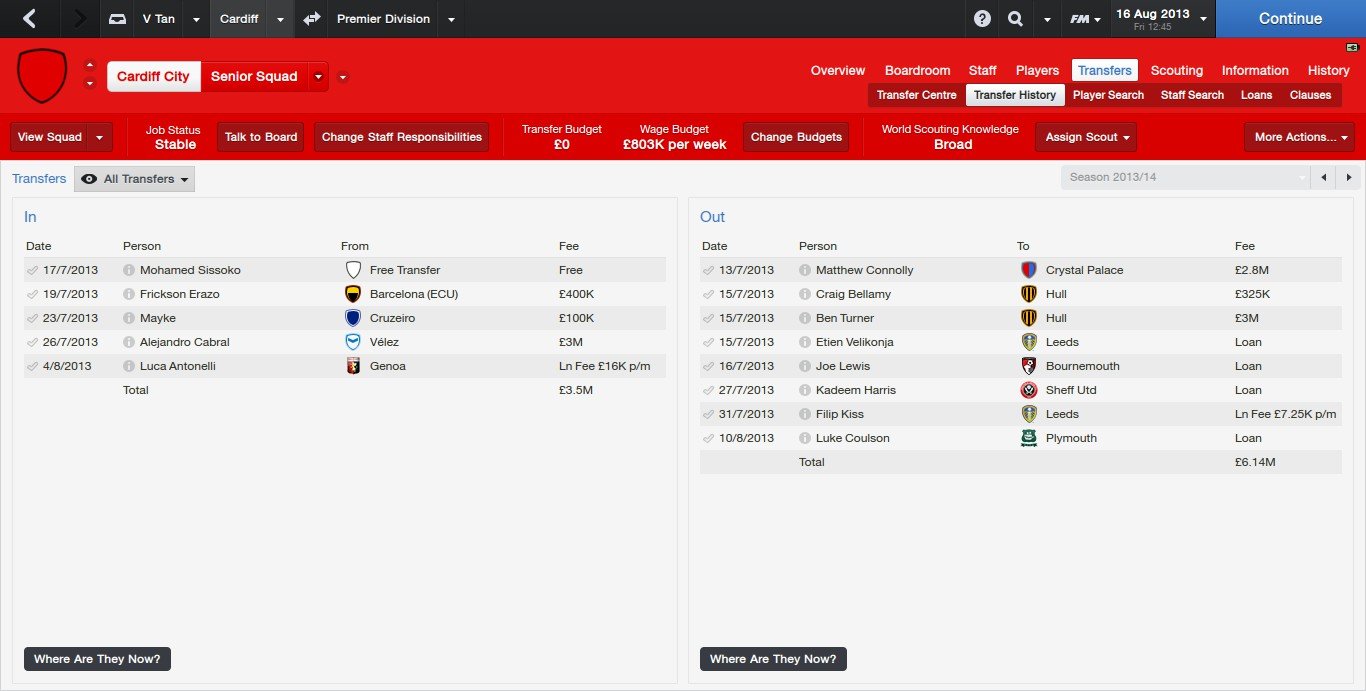 this transfer window was about adding a touch of class and improve on our weakest positions:
Lb RW and ST. In short i failed. salvio, Zaha and damiao didn't want to join but there may be a surprise striker/winger in January. However we have added a bit more depth and we should have enough to get us through the season in good condition.

On the positive side Mayke is a great Prospect and could grow into a great player for club and maybe one day even country?
Erazo and Caulker will make an intimidating centre-half pairing and should provide great stability. Erazo was seriously a no-brainer cheap low wages quality player and could have a huge sell on.
Cabral is creative and classy midfielder not the most defensively minded player but he will make up for it i hope with some key passes and assists.
Antonelli (loan)- is simply a good player and an improvement on my existing full back and im looking forward to see what impact he can have.
Mohammed Sissoko- free, low wages and a good back up to marque signing Gary Medel.

The outgoings where players that A) i could get rid of B ) not in my first team plans C) people moaning about the red shirts, sacking of Mackay, welsh and not entirely loving of my marvelous presence.
Login to Quote 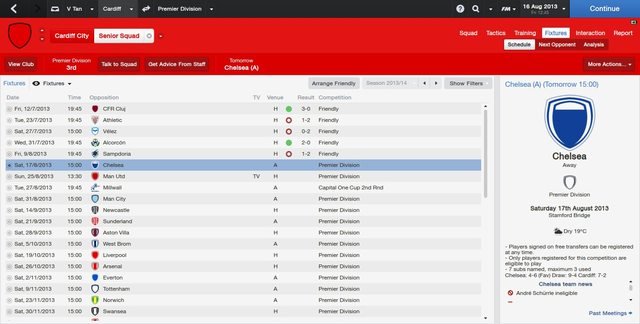 Not so flash to be honest but then again i left it to my assistant ( should of sacked him!) whilst i was busy doing transfers and drinking on a tropical island and being serenaded by my adoring employees ( why no Cardiff employees i'll never know!

the more worrying picture this image paints is the one of our upcoming fixtures. we might get a point? maybe? might need to bribe an official.

Tan on his hols 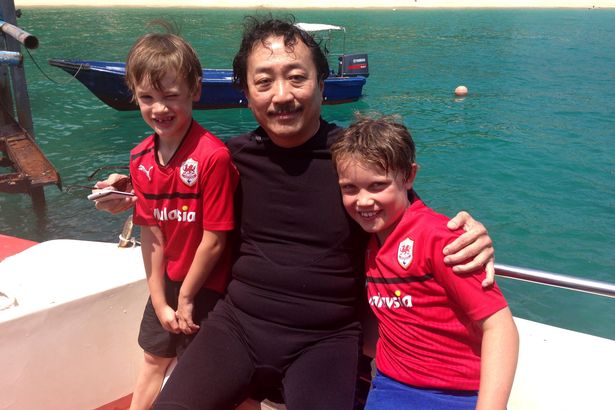 it was always going to be a horror of a month. and guess what it was. 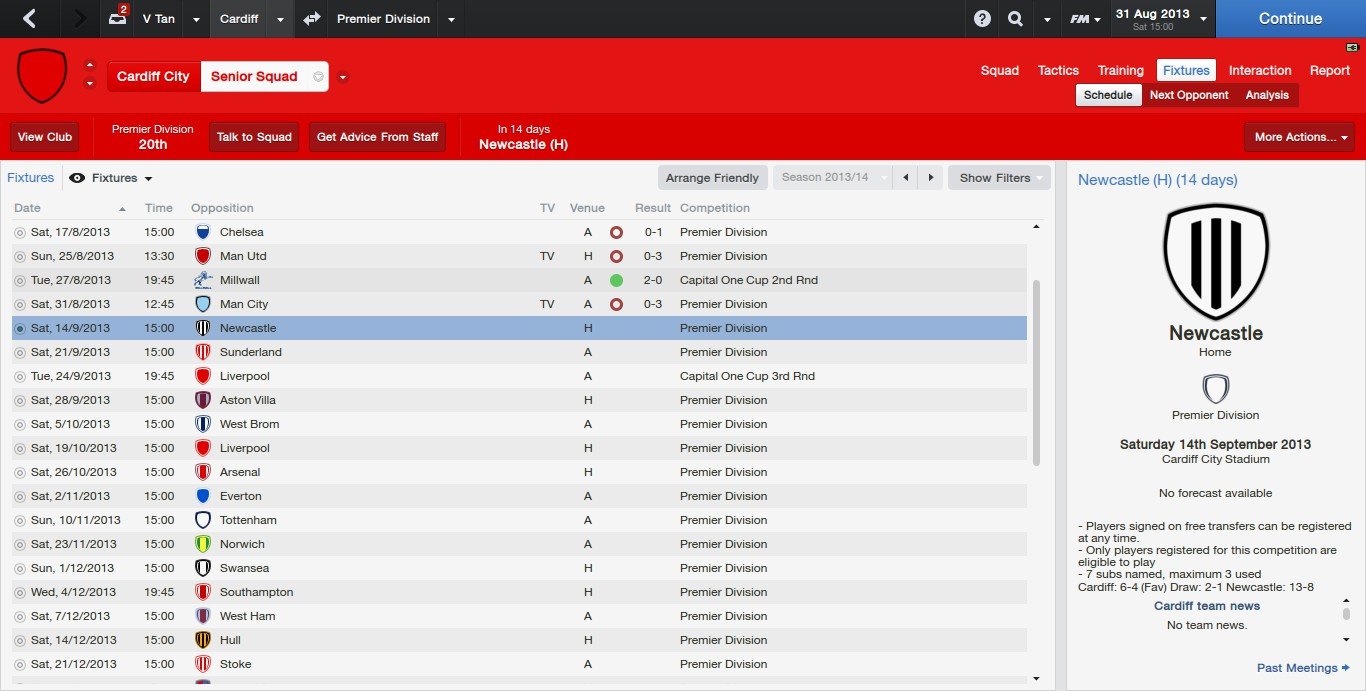 i mean ouch. no goals in the premier league and 7 conceded. Im not sure if this is a positive or a really worrying trend but 5 of the goals came from set pieces. on the positive side we limited the ability of the top teams in the league to score from free play we had chances to pick them off on the counter. on the downside we can't afford to be conceding freely from set pieces its just not good. 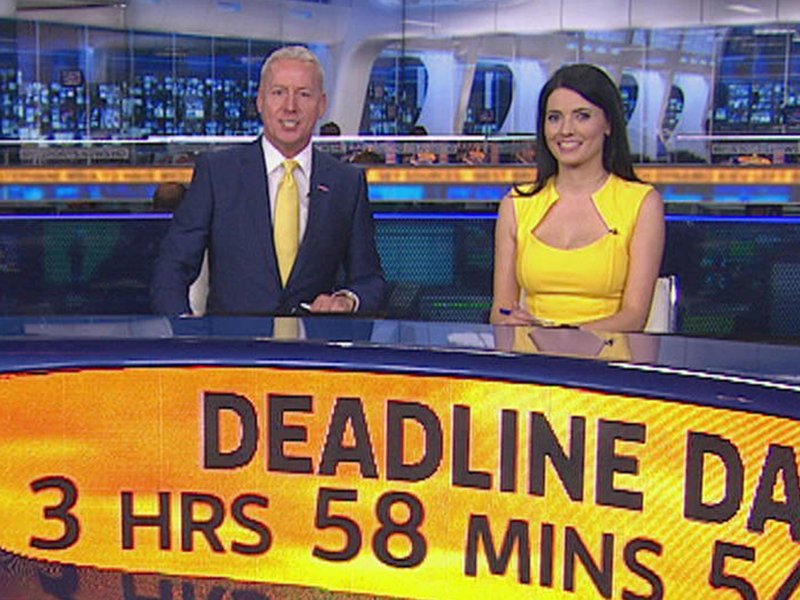 Good evening sports fans and welcome to SkySports Deadline day coverage and boy do we have a transfer coup for you! having been long trailing a right winger and having been met by failure the Malaysian Monocrat has got his man bringing in Argentinian Ace Lucas Ocampos in on loan from big money Monaco.

Vincent tan is said to be thrilled to have brought in such a quality and talented young player and he feels that young Ocampos will prove the difference in a long and difficult season. 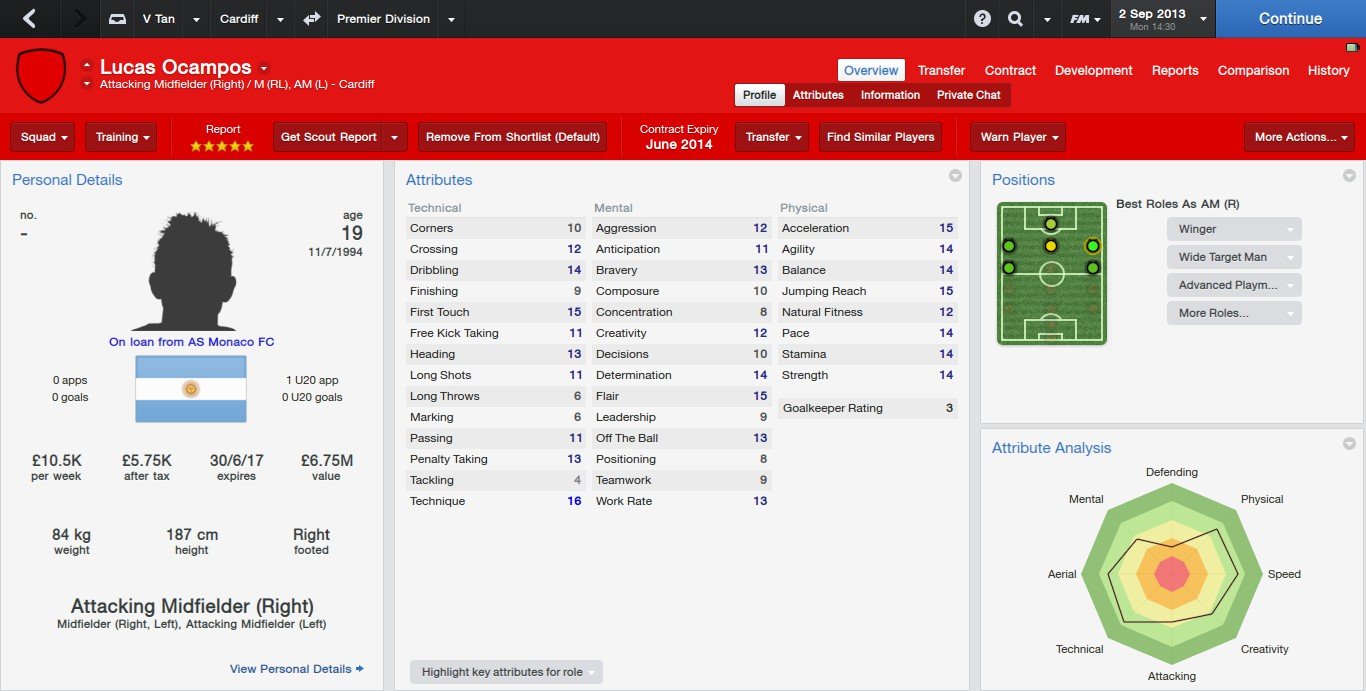 After the tough August i was looking forward to some winnable fixtures and finally some goals. I had thought that with finally adding a right winger and Andreas Cornelius finally returning to fitness that goals would follow. Turns out i got it a little wrong.

Liverpool Vs Cardiff (Capital One Cup)


Three out of the four goals from set pieces. A trend i am increasingly worried about, i had assume that my big strong centre backs would be saving us in these situations but alas not. The no goals being scored is far more worrying however apart from the Sunderland game we haven't even been created many chances. With 2 points and no goals will Tan be forced to sack Tan?
Login to Quote

Hortensius
7 years
Tan turns it around

7 points out 9 from these fixtures is good for any team and to get it from our position in the table is great. Furthermore we're scoring goals and that's really pleasing. In addition we have moved out of the relegation zone and up to the heady heights of 15th.
Login to Quote

You are reading "We shall be In-vincent-able".