patrick1
5 years
whats happened to the chat? its not showing
Login to Quote

Yeah it was a shame to lose Santon, but I felt that considering how much he's worth in comparison to our other high valued players, he'd be the most benefticial to let go, hopefully he doesn't carry on his form at arsenal. I'm sure Henrique will be able to fill in for hi just fine

@Toon Yeah it was a shame to let them both go to be honest, but I got myself into a bit of a mess with the amount of players I was bringing in, so I had to offload some of our squad to get the fund for them

Adrian18Ro
5 years
Some great wonderkids signed, i'm glad for seeing you thinking about the future. Luciano Vietto is a beast! Good luck!
Login to Quote

Trop
5 years
So the the Transfer Window has came to a close, we were undoubtedly the most active club, but not the biggest spenders, Man City took that spot. I think my signings will do very well, some this season, but most will sprout in the future. So far the best (performance-wise) have been Balanta and Henrique, Benzia being the biggest let down, but with league yet to start, who knows how they'll perform.

Norwich and Cardiff also deserve a mention when it comes to Transfer Window activity; Norwich signed Selassie and McCarthur, bringing their total expenditure to £7.55M and they sold 3 players, bringing their total outflows to £8.09M. Cardiff signed Russell Martin, a defender from Norwich. So not only have they managed to sign a key defender, but they've stolen one of Norwich's best defenders, Norwich being one of their competitors this gives them an advantage when they go head to head.
Login to Quote

AlexTHFC
5 years
Great graphics once again, this is looking like a great story!
Login to Quote

Aaron
5 years
Ah so this was the graphic you were making!! Looks brilliant mate!
Login to Quote

Aaron
5 years
What an epic start, and some great graphics again!! Shame about the Liverpool result;)
Login to Quote

Verdinho
5 years
Real nice graphics and a decent start to the season too! Shame about the drop in form after the Liverpool game but at least you bounced back with a win v your rivals

AlexSonwild
5 years
Good results even though your form dropped a bit in the last few games. And superb graphics m8! 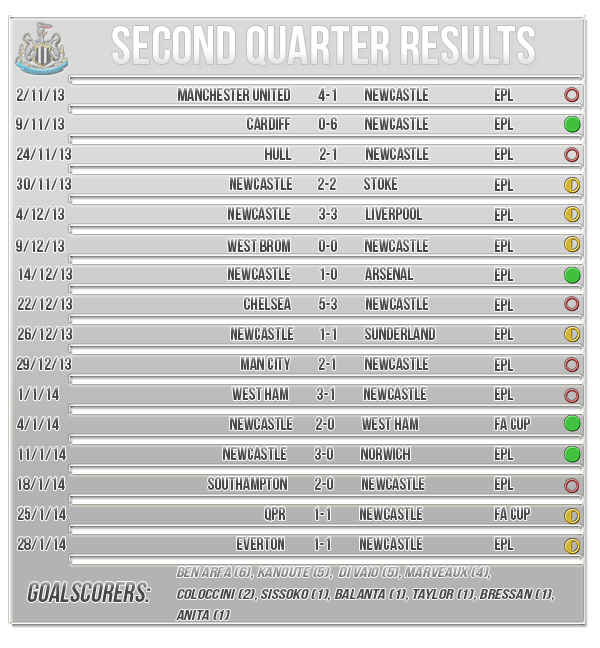 Verdinho
5 years
Quite an assortment of results!
Login to Quote

You are reading "Newcastle United: The Era of Vieira".