Squad Overview
Goalkeepers
The Goalkeepers are quite poor to be perfectly honest, Venturi being the best out of the 3, and even he is on loan from Bologna. He and Vivan have the same current ability, which is a decent player in C1/A, but Venturi has a 5 star potential. Our other Goalkeeper isn't really going to get into the squad now or ever.

Fullbacks
RB:
The right backs in this team are again quite poor, but they are overly poor, there abilities are just about good enough for the C2/A side, but both of there potentials are pretty good and could become very good players for this team. This is definitely a area that needs strengthening.
LB:
The left backs in the San Marino are the worst area of the team, they are just about good enough for the C1 division but Bamonte being the best of our fullbacks all together, but he is 29 and isn't going to get better then this division.

Centre Backs
The centre backs in the San Marino squad aren't bad they are all either leading or decent players in the division. Our best Defender in the team being Paolini, 5 star potential and 3 and half star current, this guy could be a massive player for the club, sadly though he is a loan player so if he has a big season he won't want to come back.

Defensive Midfielders
This is a strong area of the squad but lacks depth with only 2 players in this position, one of them being on loan and the other being 30, this is definitely a area that needs tending too. Pacciardi is a good player for this squad and is effectively a good player in the league as well, if he stays fit we are a stronger team.

Winger
RM:
This area of the squad is probably the weakest are with only 1 player that can actually effectively play here this area is bad. Definitely a area that needs strengthening.
LM:
The left side of the team is definitely better then the right side, this time we have 2 player that can effectively play here and they can play well here. This area won't need strengthening but if the right players comes up in this position I will buy.

Attacking Midfielder
The attacking midfielder role at the club is the area with the most strength in the team, most of the players are loan players but a few are our players and are very good. The best player in this position is Yaisien, but Sensi isn't to far behind him. These two are some of the better players in the squad, but again both are loanee's and if they have a good season might live up to better things.

Strikers
This is a really strong part of this team we have multiple players that beat the 4 Star mark and we even have a player that has the potential to become a good Serie A player. This is going to be the area where it's hardest to pick the players, especially when I have 3 players that are on 4 star current abilities. Even so I would say that Lolli is the best striker we have young, and just a good player.

Overall
The squad isn't actually as bad as it seems, but there are multiple areas of the squad that are in need a instant strengthening, this is though what I would expect from a bottom side.
Login to Quote

Cameroncox96
7 years
I think it is fair to say I haven't had the best pre-season, but with the fixtures that we had to put up with I think we did a fairly decent job, the highlight was a battling 1-0 loss to Serie B side Palermo.

Cameroncox96
7 years
A good start to the competitive season with the Italian Serie C cup, unbeaten so far, but of course we were expected to be the team that got through. This is when I also signed my two new players Alejrando and Diego Alerge. 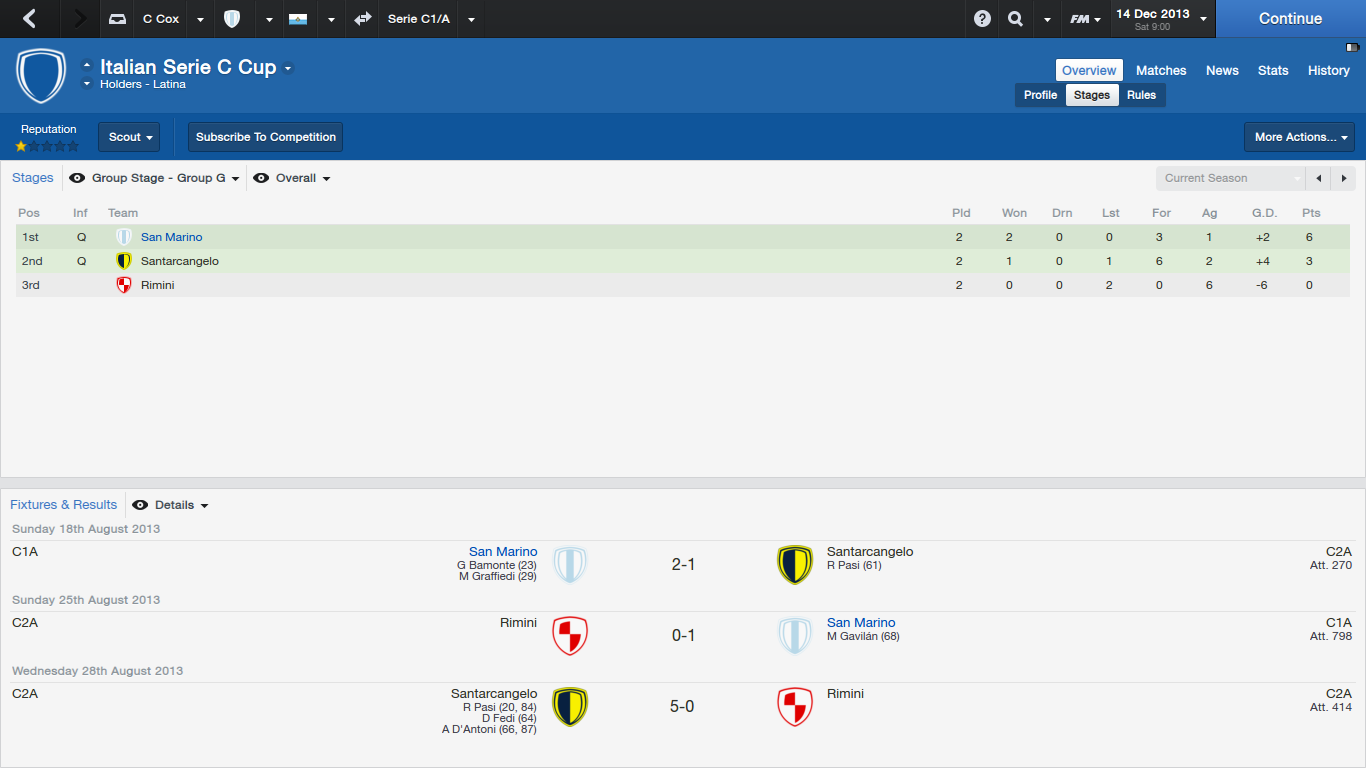 Cameroncox96
7 years
The fact that San Marino were meant to finish in last place in the league was a bit of a disappointment, but to be beating this expectation by so much, early on is definitely a dream come true, there have been some big results for the squad such as the 5-3 win at home to Cremonese and the 2-0 win at home to then top of the league Savona. The fact that we are 7th in the league is a brilliant success for the team. 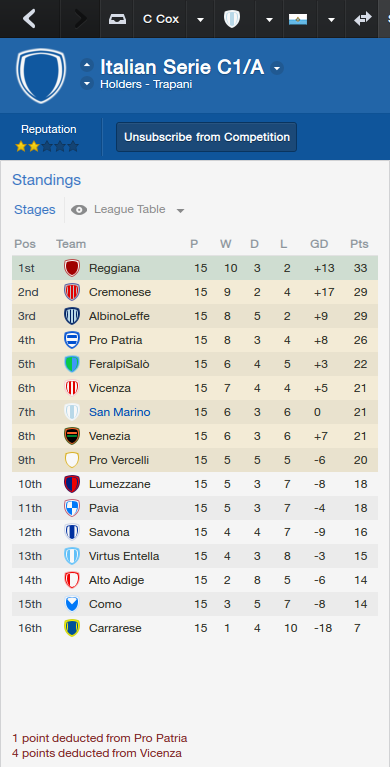 Team Lift
7 years
decent results to be honest, good luck for the second half of the season.
1
Login to Quote

Cameroncox96
7 years
Now here is the start of something big, this is the first view games for the National team. First of all San Marino national teams has there 2nd ever win, this time against Andorra, amazing result, and again a 2-2 draw at Liechtenstein is another brilliant result. The other results were all losses but to only be beaten by 1 goal against Canada and Moldova are both amazing results.

Cameroncox96
7 years
Now, back to domestic side of the San Marino spectrum. To be honest I'm not to disappointed with 6 points from 15 obviously it could be better but for a team with such players I have come to expect this. Also excited news as I have signed a new player as well him being on loan from Cesena. His name is Ismael Bangoura.

Deleted
7 years
A decent start to say you was predicted to finish bottom. KUTGW
1
Login to Quote

Cameroncox96
7 years
At the end of January I signed two young stars on free transfer, both of them were released from their clubs, which was to my surprise knowing both of them have the potential to be good players for their teams.
The first signing was Simone Ortenzi, he is a young 17 year old striker that was released from Lazio, his potential is to become a Decent Serie A player, so to have left this player go for free wasn't the best mother. I think this a brilliant signing especially for this team and the status of it, and the fact I signed him uncontested was also very surprising, I am happy with his pace and finishing at only 17 for them to be at 11 is a very solid start but he stamina is appalling and I will be doing training to improve this.
The second signing is Claudio Costanzo, he is 20 year old Right Midfielder that was released from Reggina, this is surprising because they are 2nd bottom of the Serie B league and he has the potential to become a good Serie B player. His physical stats are pretty impressive but he definitely lacks quality in the other two areas.
February results were steady, not the best but not the worst either. We managed to get 5 points from a possible 12, for the stature of the club this is pretty impressive and is nearly averaging 2 points a game, which quoting the Fifa commentators 'average 2 points a game is going to get you u near the top'.

TylerK
7 years
Doing alright, mate, keep it up and you'll be in the CL in no time

Cameroncox96
7 years
TylerK- Thanks man, well it might take a while but I'm sure I can pull it off

Cameroncox96
7 years
The time has come for the new youth candidates, there were 4 that stood out as players that the potential to make a difference in the long term for the club. The first one being Cesare Pelosi, this guy is a 15 year old Italian Centre Back, he has the potential to become a leading Serie B player which is not going to bad for a few seasons hopefully. The fact that he already has stats that are over 15 is brilliant, and I think his work rate being 16 is going to be a massive advantage in the future.

Another one of my youth candidates is Diego Gasperoni he is a Centre Midfielder, this guy hasn't got any stats that are over 15 but he has a lot more stats that are over 10 then Pelosi, his natural fitness is a big help for the future team. Also the amazing think here is that Gasperoni is actually from San Marino, but is also eligible to play for Italy. This is great the San Marino national team have a very exciting prospect and everyone is buzzing.

The next youth candidate that has been signed to the club is Fabian Calzavara he is a winger, this guy is going to be the creative hub of the team, his flair being a solid 15, this is excellent for us, but sadly he is only eligible for Italy which is a disappointment.

The next youth isn't the best he has only got a potential of 3 and a half stars but if we don't manage to get to the Serie B in a few seasons he would fit the C1/A role perfectly, he is Samir Mounsif, he is a Tunisian midfielder, he has excellent natural fitness and also has some pace on his side, could become a vital part of how we play in the future.

Cameroncox96
7 years
I didn't do a march overview because there was only 2 games and were only 6 games left of the season. All I can say is that the end to this season has been the best part of the season so far, we are into the playoffs, which is absolutely amazing consider I was meant to finish last place. What also pleased me is the amount of goals we scored in these 6 games, which was 15. This included 2 hat-tricks from Nicolo Lolli. I am very pleased with how the team conducted themselves during these final 6 games, but the defeat right at the end of the season is a bit of a disappointment even though they were the winners of the league. Hopefully this loss won't effect the squads mentality for the play offs. 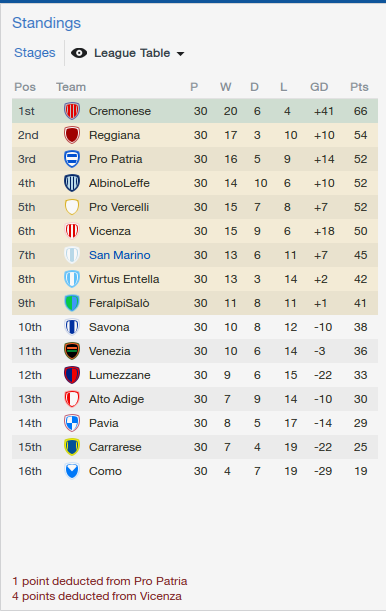 Cameroncox96
7 years
The Quarter finals was a great spectacle for the Titani fans, well the small amount that travelled to the away teams ground anyway. Not only is it a brilliant result but the fact that this is 9 goals in 2 games against Abino is excellent. The Motm was Manuel Gavilan but Nicolo Lolli got the same rating as him. Bring on the Semi-finals, this is two legged so the game is much fairer, but we must play well in both legs to progress. This match is going to be against Pro Patria, this is slightly bad news for the Titani's as we haven't beat them in either game this season, but on the plus side our fans and players will be wanted revenge.

You are reading "The good old story, San Marino Challenge".