This is my first post and my first story of FM. I hope you all will enjoy my story, I will create a new era of football.
Let's start!
Login to Quote 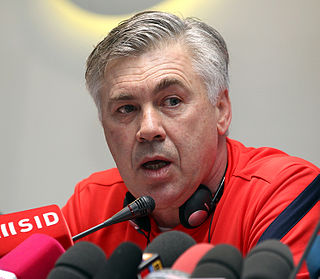 
Madrid have sacked manager Carlo Ancelotti after he ended his season at the club without a trophy.


He was dismissed following the 1-2 loss to Atl.Madrid , as the Real Madrid finished second in the BBVA.

The 51-year-old had one more year left on his contract at Santiago Bernabeu.

And ambitious owner Florentino Perez, who bankrolled an audacious £85.3m move for winger Gareth Bale during the September transfer window, will now start the search for a successor capable of recapturing the Spanish League from Barcelona, while also guiding the club to the much-coveted Champions League trophy.

Tottenham's highly rated Andre Villas-Boas, Hiddink and former Barcelona manager Frank Rijkaard are all in the frame. Dutchman Hiddink, who has a close relationship with Perez, revealed he still has an advisory role at Santiago Bernabeu.
Login to Quote


Real Madrid have hired David Beckham as their new manager.

The thirty-eight year old is reportedly delighted to be given the opportunity to hone his management skills at Santiago Bernabeu and The Los Merengues supporters will certainly be hopping that Beckham can take their team to new heights.

David Robert Joseph Beckham OBE, /?b?k?m/ (born 2 May 1975) is an English former footballer. He has played for Manchester United, Preston North End, Real Madrid, Milan, Los Angeles Galaxy, Paris Saint-Germain, and the England national team for which he holds the appearance record for an outfield player. He was the first English player to win league titles in four countries. He announced his intention to retire at the end of the 2012–13 Ligue 1 season on 16 May 2013 and, on 18 May 2013, played his final game of his storied 20-year career.

Real Madrid are David Beckham's first venture into management, having been appointed as the manager.
Login to Quote

Louis O.
8 years
Nice start, Beckham stories have a lot to live up to on this site

And you're using my banner!
Login to Quote

And you're using my banner!

Sorry I did not ask for permission first, so I asked the permission now haha :p

thank you for giving spirit, I will try hehe
Login to Quote


Manchester City are interested in signing Real Madrid’s Sami Khedira in a £20 million deal. Khedira’s contract runs out at then end of next season and with the player reportedly unhappy Real Madrid may look to cash in on the 26-year-old.

Khedira joined Real Madrid from VFB Stuttgart in 2010 and 41 caps for Germany. He has been a key man for Ancelotti this season but has recently criticised the club for allowing Mesut Ozil to join Arsenal and saying he has been made a scapegoat in Madrid. Khedira would receive a significant pay rise if he decided on joining Manchester City although they are not the only Premier League team interested in his services.
Login to Quote


Man City have decided to splash the cash on R. Madrid's Khedira.

The deal bringing the twenty-six years old German center midfielder to the club is though to be around £19M.

Stutgaart will receive 2.0% of the transfer fee as a solidarity contribution as part of the deal. The amount is £378K.

Khedira was part of R.Madrid side who were crowned Liga BBVA Champions in 2012.
Login to Quote

kubik
8 years
Nice move. You have some better players than Khedira in your squad. Good luck

I will give the best for my story haha

Man of The Match

Next Match: vs Granada
Login to Quote

You are reading "Real Madrid - The New Era".