1. To keep things fair, certain people who are regulars and will be able to play the Chairman Game are to be contacted asking if they wish to join. Each entrant will pick a number from 1 to 20 and each number will be a certain Premier League team. The team that they get is the team they will use. Only members who are active and trustworthy will be asked to join. This means that if you are not asked to join at the start of the game, you will not be in the game to begin.
However, you may ask to join the waiting list, which allows you to take over a team if the chairman drops out.


1. You may sack the Manager at any time. You will have to pay out £5m in compensation to the manager, making it an expensive and risky strategy. Any staff member you sign will be given a 5 year contract. You can sack the manager for free at the start of Chairman game.

2. At the start of the game you will have the chance to sign any manager you desire from any club by sending a PM to both me and Louis O. In this PM, you will specify the manager you want, the club he is from, and the wage that you are offering, which must be higher than his current wage. If somebody else bids for the same manager, the person with the highest wage offer will get the manager, so it is important that you offer a lot of money. This method can only be used at the start of the Chairman Game. If you wish to sign a free agent manager, his wage must be at least £10k. Also, to sign a manager from another Premier League club, you must agree a fee to pay to the other club with it's chairman, in the same way as you would negotiate a player transfer. £20k will be added to his current wages. These two methods can only be used after the start of the Chairman Game.

3. If you feel the need to adjust your transfer and wage budgets, you can do so. £1m of transfer budget becomes £10k of wage budget and vice versa. However, when doing this, you must keep track of your finances, so that you do not spend more money than you have.

4. Your manager will be given the remainder of your transfer and wage budgets to sign players that he so desires. This means that you will be able to rely on him to find a player to fill a gap in your squad rather than having to do it yourself. However, the manager may sell any one of your players to another team. Perfect reason, I think, to shell out £5m and give him the sack.


1. You do not have to do press releases or any kind of updates if you don't want to. However, if you do, please put effort into them to keep them neat and presentable in the same way that you would with a story.
2. You must be able to regularly check the thread for updates, read your PMs, and follow the rules of the game. Failure to be active or repeatedly violating the rules of the game will see you being removed from it.


1. To sign a player from another team in your league you must contact the Chairman of that team and agree a value with them via PM. (You can then calculate their wage using one of the rules below) Both Chairmen will then need to PM me or Louis O. with the agreed transfer fee. You must screenshot the proof of the deal when you send it or it will not be confirmed!

2. You may sign any amount of players on a permanent transfer or loan from other Premier League clubs.

3. You may have 3 foreign transfers and 3 transfers from the lower leagues in England. To do this, you must name the player and his club in a PM. In this PM you must also post the transfer fee you wish to pay, which must be over the player's value (see below). If another person bids more, you will be notified and have 24 hours to increase your offer. If you wish not to, you can opt for another player. If you do choose to, the other chairman will be notified and then you will be asked to make your final offers.

4. You may release any players from their contract at any time.

5. If you wish to sell players then you need to post them in the thread as available. Other Chairmen can then make offers for them if they wish. If they are not sold to another Chairman in the league then I will set them as transfer listed in the game, this does not guarantee that they will be sold however.


1. If the transfer is below £5 million, then £10k will be added to the players' current wage.

4. If the transfer is above £25 million, then £50k will be added to the players' current wage.


You will have the chance to sign any manager you desire from any club by sending a PM to both me and Louis O. In this PM, you will specify the manager you want, the club he is from, and the wage that you are offering, which must be higher than his current wage. If somebody else bids for the same manager, the person with the highest wage offer will get the manager, so it is important that you offer a lot of money. This method can only be used at the start of the Chairman Game. If you wish to sign a free agent manager, his wage must be at least £10k. Also, to sign a manager from another Premier League club, you must agree a fee to pay to the other club with it's chairman, in the same way as you would negotiate a player transfer. £20k will be added to his current wages. These two methods can only be used after the start of the Chairman Game.


If your wage bill needs trimming, or there's someone really bad who you know you can't sucker anyone into selling, now is your chance to get rid of the deadwood in your team! The rules are simple. You may release any player that you wish at a cost of £500k per player, to be deducted from your transfer budget. You can release any amount of players you wish, but be careful; should you release too many players your squad may lose depth and your results may suffer. To set your players for release, you must send me and Louis O. a PM containing the list of players you would like to release.

You will then get all of that players wage.

PUTIN (NOT THAT ONE!) TAKES OVER TOTTENHAM HOTSPUR 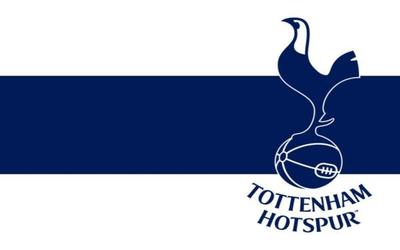 Vladamir Putin has ousted Daniel Levy as chairman of Tottenham Hotspur Football Club and has promised to invest millions of pounds into the London club. No, not that Vladamir Putin, you idiot!

The hilariously named millionaire Ukranian businessman owns the Eastern European branch of Playboy magazine. Born and raised in Kiev, Putin is an ardent detractor from the Putin that controls Russia, and the Ukranian Putin is also an ardent football fan.

"I am absolutely ecstatic to take over this prestigious club," said Putin with a thick accent, flanked by two scantily clad models from his magazine at his unveiling. "Tottenham is one of the biggest clubs in the country, and I hope to lead it to trophies and glory!"

Many fans are wondering if this new owner will backfire, but plenty are optimistic that Spurs' selling days are done. Over the last few years, the likes of Luka Modric and Gareth Bale have made massive money moves to Real Madrid, but with the spending power of Putin, they will hope to now keep their star players.

Tim Sherwood also looks set to keep his job as manager of Tottenham Hotspur after Andre Villas-Boas' sacking at the hands of Daniel Levy. The energetic young manager has promised exciting football for Spurs fans, and Putin seems to agree with these ideals. "Vlad's a really nice guy, we've already talked a bit and I really like his vision for the club," said Sherwood about his new boss. "I especially like his women, he says that if we win the league I can have my pick of three of them!"

Regardless of the controversy surrounding Vladimir Putin's name, one thing is sure about the Ukrainian Playboy businessman's upcoming reign at Tottenham Hotspur: success is coming.
Login to Quote

The 510 Series
5 years
Asda God!!! *bows down*
Edit: I know that this is the real Asda God when he's talking about David Cameron's sprouts and says that AVB has a nice name!
Login to Quote Unknown Scottish Billionaire Anthony Henderson has bought Stoke from current owner Peter Coates for an unknown fee. Not much is known about the mysterious tycoon apart from he is Scottish and he made his billions in the beetroot business. Henderson -who refuses to show his face- came to the clubs press conference dressed at a giant jar of beetroot said "I hope to bring glory to this fine club and through the power of beetroot I shall".

Henderson's purchase of the club also brought along a change in management with the Scotsman hiring former Celtic manager Neil Lennon. Lennon Who said he was "glad to be working with such a good club and such a wonderful chairman" replaces former Stoke manager Mark Hughes who is said to be "Furious" at the decision to sack him.
Login to Quote 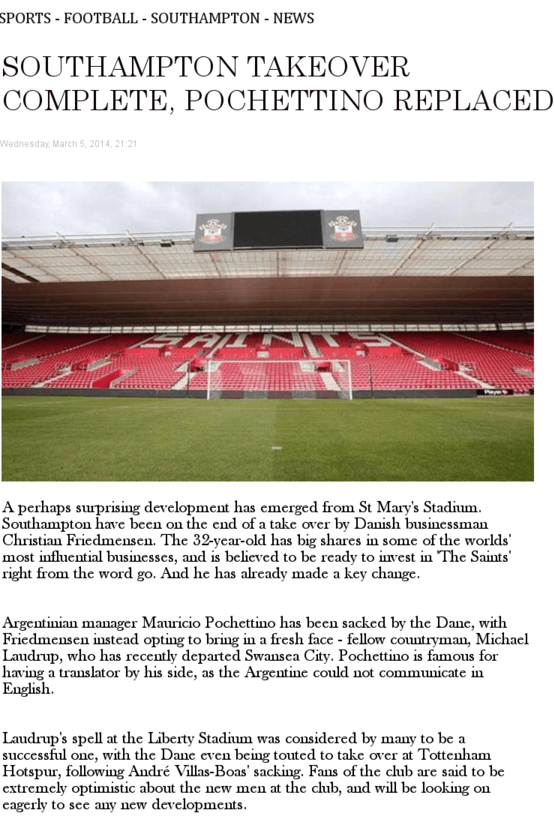 Edit: You corrected it!
Edit 2: I accidentally thanked you. That's how we roll on Merseyside.

BaggiesJames
5 years
Wait, i got told that i was Aston Villa
Login to Quote 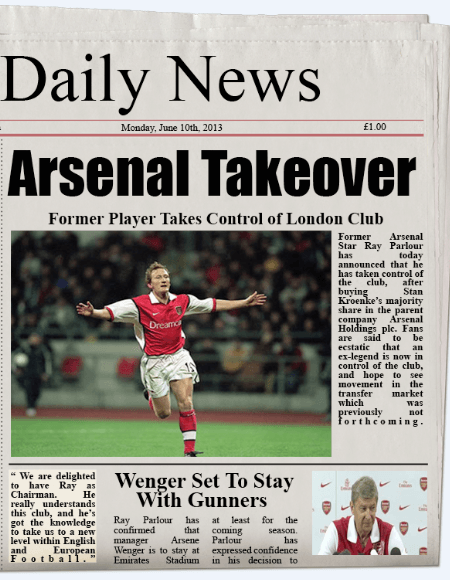 
The Indian Billionaire Rogan Josh today completed a sensational buyout of Liverpool. The unknown Indian Billionaire has made his money negotiating deals for banks to save money and also owning 1,300 acres of land in which he rents out.

It is reported he paid just £1 for the club because the previous owner got sick of the club and Rogan Josh has already caused shock-waves. He fired Brendon Rogers because he thought he was ugly. 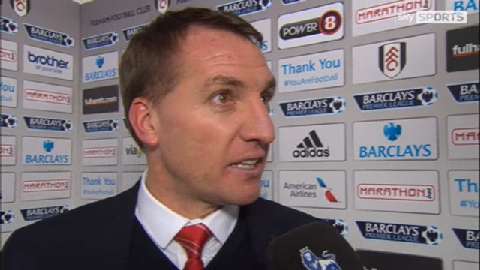 Rodgers pictured above is said to understand the reasons because 'I look like the back end of a bus.' Rogan Josh who has 8 teeth missing and look 83 rather than the 29 he really is has hired Antonio Conte instead on £89,000 a week with a 5 year contract.

It is reported that Luis Suarez was not happy with Rodgers' sacking and went public. 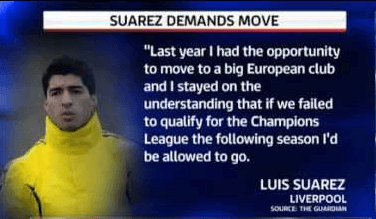 Rogan Josh issued a stern responce but a shocking one. Fuck him! He is a Ugly Uruguayan anyway but he will not be sold on the cheap because I want as much money as possible so I can buy some good looking players!

It is certainly going to be a roller-coaster ride for Liverpool fans around the country from now on!
Login to Quote

You are reading "The Chairman Game".