fmhunter
6 years
I miss this

Neal
6 years
fmhunter: Me too, man, me too

If all goes well, I'll be back to writing this weekend!!

HEARTBREAK AT ANOETA AS SOCIEDAD OUT ON AWAY GOALS 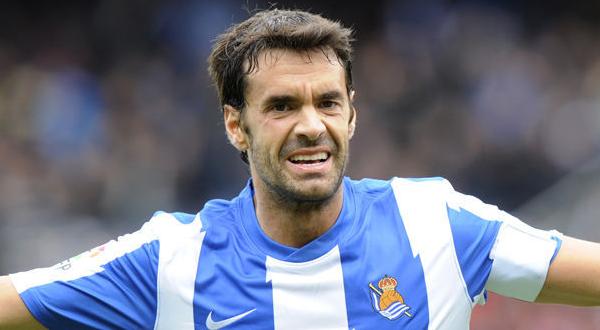 Coming off of their difficult 1-0 away loss to Schalke in the first leg of the Champions League Qualifiers, Real Sociedad had to look to make a major impact back home at the Anoeta to try and reach the group stages. They came within inches of upsetting the odds.

Anthony Annan was given a start in central midfield for Los Txuri-Urdin despite being at the center of the racial slur controversy following the training ground bust up the other day. The alleged offenders, Markel and Gorka Elustondo, were both excluded from the squad entirely and were nowhere to be seen in the stadium.

As the game kicked off, the Anoeta was rocking as the fans tried to urge Sociedad on to the group stages. However, it was that man again to make the difference for Schalke 04; Jefferson Farfan. The pacy Peruvian winger was brought down by Antonio De La Bella in the box, and, although it looked like a dive, the spot kick was awarded. Farfan finished coolly to make it 2-0 on aggregate, both goals coming from penalties.

It seemed all of San Sebastian was stunned, but that only lasted for the better part of two minutes. Captain fantastic came to the rescue yet again for Hasan's men as Xabi Prieto's scything through ball found Canales in acres of space in the box. The wily attacking midfielder made no mistake with his finish, bringing Sociedad back within striking distance. 2-1.

Four minutes later, the tide shifted entirely. This time, Canales turned provider and Prieto turned benefactor. Canales sprayed the ball out to the right flank for his captain who burst past two defenders and rolled the ball past the helpless Ralf Fahrmann. Neal Hasan was ecstatic on the touchline, but it wasn't over yet. The score was 2-2 over both legs, but Schalke was still through on away goals. 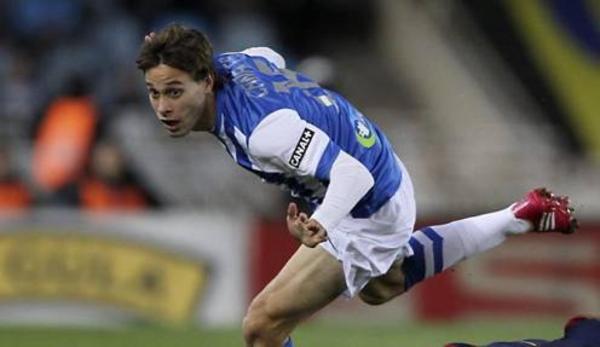 Playmaker: Canales was hailed by Hasan after the match for his excellent performance.

La Real continued to push men forward and were dominating ball possession, but Schalke's back line stood sturdy after that, and the two sides headed into the locker rooms at half time with the score at 2-1 on the night, Schalke still with their necks in front on away goals.

The second half wasted no time in getting exciting. Kevin-Prince Boateng, the newly signed Ghanaian midfielder from AC Milan, clipped a delightful ball in behind Jon Gaztanaga for Julian Draxler to run on to. The youthful Germany starlet took one touch to settle before rifling the ball into the near post with his left foot and putting Schalke firmly in charge of the fixture with only 40 minutes left to go.

Exactly on the hour mark, though, Sociedad was thrown a lifeline. Benedikt Howedes had clumsily knocked over substitute Imanol Agirretxe in the box, and the referee had awarded a penalty (the second of the game and the fourth of the tie, yet only the first to Sociedad). Xabi Prieto stepped up confidently and smashed the ball

A collective groan of agony erupted from Los Txuri-Urdin faithful, and yet Sociedad pushed on, knowing nothing less than two goals would be enough. Howedes, Matip, and Kirchhoff, leading a makeshift back 5, fought tooth and nail to keep away the rampant Spaniards' attack.

With five minutes left to go, Prieto tried to atone for his mistake. Esteban Granero's cheeky backheel found the winger in space on the right side of the box, and Prieto made no mistake in hammering the ball straight into the top corner on his first touch. 3-3 on aggregate, and now it was all hands on deck for Sociedad in search of the winner.

They pushed forward hard for the last seven minutes, but to no avail as the Schalke defense powered through and held on to the away goals victory, 3-3 the final score.

"The lads fought like warriors," said Hasan after the match. "Every last one of them left everything out on the pitch, and I cannot fault their commitment nor their performance. Sergio [Canales] and Xabi [Prieto] were both excellent today, true leaders of our attack. Of course it was a tough moment for Xabi [with the penalty miss] but I can assure you, he will bounce back."

All of this sentimental talk, however, came shortly after a fiery tirade against the refereeing in both legs. "We hardly got any calls, not to mention Schalke received no less than three penalties, two of them on dives, I would argue. The refereeing was atrocious."

Regardless, Schalke are through to the group stage by the slimmest of margins, and Real Sociedad will have to settle for a Europa League spot despite a spirited performance.

Jer
6 years
I thought you'd go through :/, but either way EL is tough, with the CL drop-outs! Best of luck mate, and welcome back

Anywayyy, unlucky loss, always cruel to go out on away goals!

Walter
6 years
Great to see you back in writing Nealão, unlucky about the result though

Neal
6 years
Pauker: Thanks man, it's good to be back! And yes, the Europa League will be tough, but I'm bitterly disappointed to not make the Champions League. We'll have to make do, I suppose.

ZapdosTheGreat: Hell yes I am!

And yeah he did so well, only to blow the vital penalty

Josh_MU And I've missed writing them! Yeah, going out on away goals always stings because you were basically equal to the opposition.

Walter: Thanks bud, and yeah I really thought we'd be going through!

Justice: My reaction exactly when the final whistle blew: "NOOOOOOOOOOO"

Group G is most certainly the group of death. Boasting the likes of the Barclays Premier League side Swansea, Liga BBVA outfit Valencia CF, and Serie A's capital city side SS Lazio, it's set to be a tight race to try and qualify for the knockout stages of the competition. Most people are tipping Lazio or Valencia to win the group, but Laudrup's Swans are always a threat. Gyori ETO of Hungary looks set to suffer a torrid time among such company.

Group F seems also to be tipped for great excitement. After a thrilling but heartbreaking away goals loss to Schalke in the Champions League qualifiers, Real Sociedad will hope to bounce back and go far in the Europa League. However, they will have to stake their claim in the group against Austrian powerhouse Red Bull Salzburg and Ukranian contenders Dynamo Kyiv. All three sides have the potential to make the knockout rounds, with Sweden's Elfsborg likely quivering in their boots.

The full UEFA Europa League group draw is as follows:

Group A
Group B
Group C

Feliks
6 years
nice group, certainly not hard but no easy beats after. should test you well
Login to Quote

pompeyblue
6 years
Unlucky about the loss in the CL qualifier, however I'm sure you will do well in the Europa League, with your group not too difficult!
Login to Quote

Neal
6 years
fzemdegs: It won't be super easy but I think we can certainly make the knockout stage

pompeyblue: Yeah it was a tough way to go out, but now hopefully we can go for in the Europa League and bring the club some success

Josh_MU
6 years
Easy group. You must not disappoint.
Login to Quote

Neal
6 years
Josh_MU: I swear to you, I'll give it my all