InvertedWingbacks
7 years
Flanagan for Euro 2016? haha, thats my aim, he's getting loaned out this season if all goes to plan...i've got a few other players being tutored as well..

looking for some more links to set up, particularly for Jerome Sinclair

Are Liverpool Missing The Suarez Effect?

After what could be described as a lacklustre start to the season for Liverpool, we have to ask: Are they missing Luis Suarez? The Uruguayan's ban ended after the Red's 1-0 defeat to Chelsea, meaning the returns to the fold in time for their crunch tie against Manchester City at Anfield in 4 day's time.

But, with Liverpool sitting 5th in the league after 5 games, with 3 wins, a win and a loss, and an inglorious loss to Leyton Orient in the capital one cup, are Liverpool missing the influence of the man who scored 23 goals in 33 appearances last season? The early signs are, yes; yes they are.

In Suarez's absence, manager Hamann has been toying with several different formation, and has only seen his side score 6 goals in the league, compared to the 13 of Man Utd and Everton, or the 11 of Chelsea and Man City; the teams who currently make up the Top 4.

This lack of goals is something which the Anfield side need to address, and Hamann must be praying Suarez is the answer to his conundrum...but where does he play him? certainly, he can hold his own as a loan striker, but is he more effective in a number 10 role, behind Daniel Sturridge? Only time will tell how he plays, and no time will be better for a tactic to click than against Manchester City.

A late winner from Coutinho saved Liverpool from a draw aginst West Brom, but nothing could stop Chelsea from taking 3 points at home, despite the credible second-half performances of Harry Wilson and Jordan Rossiter. Reds fans will be hoping their side can at the very least take points off Manchester City, to stop them falling too far behind at this point of the season.
Login to Quote

September Is a mixed Bag for The Reds

September was a mixed month for Liverpool, as they beat West Brom and lost to Chelsea, before welcoming Luis Suarez back to the fold for a 0-0 draw with Manchester City. Red's fans have voiced their concerns about the team's less than ideal start to the season, but are still confident that their side can turn it around.

Vice-Captain Lucas has assured fans that they have nothing to worry about: "We're still adjusting to how Didi wants us to play, but training over the last week has been very positive, and we're gonna turn this around for the fans. 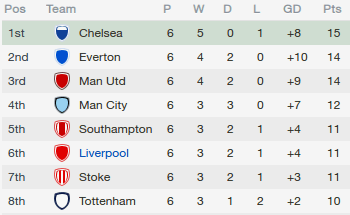 Player and Young Player of the Month

Jonaldinho
7 years
Decent month there, a shame about the Chelsea match.
Login to Quote

i'm glad City and Chelsea are out the way, but there's no easy games
Login to Quote

Can the Reds Turn it Round: October

An unlucky defeat to Southampton prevented Liverpool from completing an unbeaten month, as they turned in 3 high-quality performances, seeming to have finally grasped their new tactics system, and reaping the rewards.

The 'SAS' put their stamp on the first game of the month against Newcastle, with Sturridge scoring twice and Suarez also getting on the scoresheet as 3 goals in the first half proved to be enough to resist the Newcastle comeback.

Against Southampton, Glen Johnson scored a rare goal, which brought Liverpool back into contention after they went 2-0 down, but the Reds' attack were posted missing and couldn't capitalise on the hard work of the midfield and defence.

Luis Suarez once again demonstrated why he is so important to the side, as he scored two goals at Anfield to sink Hull, and keep an air of respectability around the team's league position. 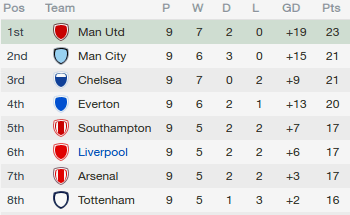 Player and Young Player of the Month 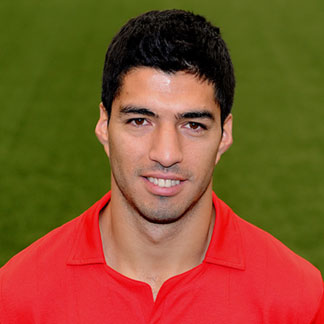 Liverpool are today preparing to face Everton in the first Merseyside derby of the season, after 2 consecutive draws; against Stoke and Arsenal. Liverpool's preparations will be encouraged by the news that Aiden McGeady will miss out through injury, although players such as Kevin Mirallas and Matias Fernandez will still pose a massive threat to the Liverpool defence.

Everton currently sit 4th in the Premierhship, 4 points ahead of Liverpool, and that's a gap which Liverpool will be looking to cut with a victory on Saturday. Ahead of the game, Liverpool defender Glen Johnson took time to tell us how he was feeling about the Reds' chances, saying "I think we've got a good chance: we've adjusted to the tactics that Didi wants us to play, and we're working together well on the training ground and during matches. We've been unlucky this month, but Everton is our chance to turn it around."

Liverpool captain Steven Gerrard has also been talking to the BBC ahead of the game, backing the side's strikeforce of Daniel Sturridge and Luis Suarez to take the game to Everton on Saturday.
"Daniel and Luis will be key on Saturday, as well as the rest of the squad. Both of them can change a game really quickly, and that kind of influence is exactly what we need.
Login to Quote

Liverpool's fans are still firmly behind manager Dietmar Hamann, after a month which saw their team unable to pick up a victory in 4 games. The Reds drew with Stoke, Arsenal and Aston Villa, while losing 2-1 in the first Merseyside derby of the season.

After the final whistle on Saturday, sources have suggested that Hamann held a team meeting to lift morale in the squad, with several players looking utterly defeated as they left the pitch at Anfield. Youngster Harry Wilson was amongst those players, and he took time today to talk to us about his experience this month.

"Overall, i've been having a great time in training and on the pitch, but it's frustrating not to be able to break defences down. I'm learning a lot all the time though, and Luis [Suarez] has been great both on and off the pitch. I think a win is just a matter of time, but we're dropping far too many points, and something obviously needs to change. 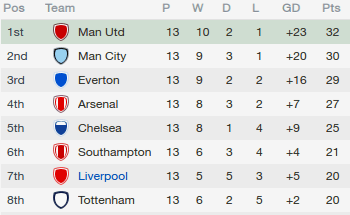 Liverpool youngster Harry Wilson has sealed a place in History, becoming the Anfield club's youngest ever goalscorer. Wilson scored his iconic goal in Liverpool's 3-0 victory over Cardiff at the tender age of 16 years and 274 days.

Speaking to BBC Sport, Wilson was visibly delighted with his goal, saying "I'm so happy; i've been working hard to cement a place in the team, and to score at this level is really incredible. I'd like to thank everyone who's supported my dream to play at this level, and particularly Luis [Suarez] who's been massively influential in helping me develop my game over the last few months. Hopefully this goal is just the first of many

Wilson's goal capped a good month for the winger, as he started 4 games, only sitting out the club's 3-1 Victory over Manchester United. In that time, Wilson contributed an Assist for the side too, as he shows signs of developing his game further. In the past, Wilson has admitted that, despite being likened to fellow Welshman Gareth Bale, he tries to model his game after Bale's Real Madrid team-mate Cristiano Ronaldo. Only Time will tell if Wilson can live up to his own aspirations.
Login to Quote

Liverpool moved back into contention at the top of the table this month after avoiding defeat in 5 games, winning 3. Most notable of these was the Merseyside club's 3-1 victory over rivals Manchester United at Old Trafford. A Steven Gerrard penalty put the reds 1-0 up after 25 minutes, and 2 goals from Luis Suarez sealed the victory, despite United clawing a goal back.

Liverpool carried their goalscoring form through to the next game, once again scoring 3, this time without reply as a Gerrard double and a Daniel Agger header dispatched Fulham.

A 2-2 draw with Sunderland followed, with both Sunderland goals coming in the 2nd half, as Liverpool suffered a minor defensive collapse. Any worries about Liverpool prolonging their inconsistency were dispelled the very next game against Cardiff, as 2 goals from Daniel Sturridge, and a 10th minute strike from Harry Wilson gave the Reds a 3-0 victory.

In the final game of month, Liverpool travelled to Norwich knowing that a victory would send them into the top 4 of the league, and give their fans something to cheer about at New Year. Norwich however, had other ideas, Leroy Fer putting them 1-0 up after just 9 minutes. Liverpool had an anxious wait until an 81st minute penalty from Daniel Agger drew Liverpool level. 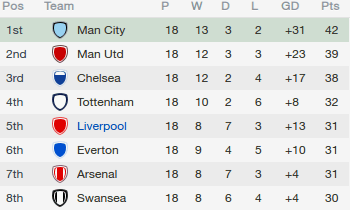 Player of the Month: Daniel Sturridge

Josh_MU
7 years
Great update! Very good month all round for you!
Login to Quote

Aaron
7 years
Daaaamn girl you got the boys playing supeeerb, And loving that United win at OT