The Liverpool board have today announced that the club's financial restoration has been faster than planned, and they are ready to provide manager Hamann with funds to strengthen on the club's 4th placed finish in the Premiership this season.

With transfer rumours flying wildly around Anfield already, fans are said to be eager to see who Hamann brings in, with the general consensus being that the backline at the club needs freshened, despite the club conceding the least goals of any team in the league this season.

Manager Hamann declined to comment today on any prospective transfer activity, only commenting that despite the funds, it is likely he will have to sell in order to buy big.
Login to Quote

Jack
7 years
Great news about profits. Hopefully it gives you enough to bring in some world class quality!
Login to Quote

InvertedWingbacks
7 years
Hoping so mate! Thanks for taking the time to read and comment

InvertedWingbacks
7 years
I was as surprised as you! haha! Still got our fan awards to come, then it'll be into WC time
Login to Quote

Today, Liverpool fans saw their team's first movement in the transfer market for over a year, as their team brought in a host of young players, including Brazil starlet Nathan from Atletico Paranese for an undisclosed amount.

The teams' other signings for the moment are all young players who manager Hamann, and Head of Youth Development Ryan Baker obviously saw something in when the nation's clubs took in their youth intake.

The first Signing making his way into the Anfield dressing room, or, more accurately, the youth teams at Anfield, is Suad Hadzic, a 15 year old Bosnian striker who was overlooked by Tottenham on Intake day, for reasons best known to themselves:

Secondly, Jackie Pedlow, a 16-year old Attacking midfielder joins the Reds from Huddersfield, in a deal worth compensation of £425k. Whilst perhaps not held as being quite as talented as Hadzic, Pedlow still looks to have a bright future ahead of him in football.

Liverpool's 3rd incoming player is 16-year old Josh Gyoury-Hales, a 16 year old Defensive midfielder who has been dubbed the 'new Nobby Stiles'. Josh arrives from Birmingham in a deal worth £400k, and will be keen to settle down and impress.

The other 3 players joining the club do so in deals worth greater amounts. Two players join from Hertha Berlin, for a combined fee of £7.2 Million after all conditions have been accounted for. These players are Martin Brunnerman, a 15 year old German Striker who can also play on the left and centre of the attack, And Marcel Fritsch, another 15 year old Striker, who can also play on either wing. Both players look to be solid business for the Reds, and will provide a wealth of opportunity, and presumably large savings on attackers, in the future.

However, Hamann's crowning glory so far this transfer window, is the signing of Samba Starlet Nathan, who joins Liverpool from Brazilian side Atletico Paranese, where he made 35 appearances. the Central Attacking midfielder joins a side bursting with talent at that end of the pitch, and it may be difficult to see where he will fit with Coutinho, Wilson, Sterling, Suarez, Sturridge and Borini, but with a wealth of attacking options, Hamann looks set to spring some surprises on his opponents this term.
Login to Quote

Liverpool Ready To Kick Off Pre-Season

The mood inside the Liverpool camp is one of hope and optimism, as they prepare for their opening game of pre-season against Juventus. After the 4th placed finish of last season, Liverpool are playing the Champions league this season, and manager Hamann sees the Juventus tie as an ideal opportunity to measure how his side will play against Europe's top sides.

With England knocked out of the World Cup at the semi-finals, players such as Gerrard, Henderson, Sturridge and Sterling will return to the Liverpool camp early, and will be keen to impress, given the introduction of some high-profile players in the summer.

New Left Back Domenico Criscito missed out on Italy's World Cup squad, and will be determined not to miss out on any further international opportunities, and is sure to work hard to cement a place in the Italy squad for the European Championship Qualifiers, and the tournament itself in 2016.
http://static.guim.co.uk/sys-images/Sport/Pix/pictures/2012/5/28/1338208139292/Domenico-Criscito-match-f-008.jpg

German striker Kevin Volland will also be keen to force his way into the international set-up, and will be pushing Sturridge, Suarez and Borini all the way in the bid for starting positions.
Volland moved to Anfield in the summer, after a season where he managed 3 goals and 8 assists for Hoffenheim, in 34 appearances. At only 21, Volland has plenty of time to grow at Liverpool, and working with Suarez and Sturridge is bound to improve his game.

Vlad Chiriches, signed from league rivals Spurs, joins the Liverpool backline which was already so strong last season, after joining in a deal woth £10.5 million. Chiriches only made 19 appearances for Spurs last season, scoring 3 goals, and Hamann clearly saw enough in those performances to make him part of the Anfield setup.
http://sport.bzi.ro/public/upload/photos/264/Vlad_Chiriches_Tottenham.jpg
Login to Quote

InvertedWingbacks
7 years
Hoping they can cut out the draws that plagued us last season; Cissokho was leaving, but I didn't want to extend his loan, so I brought in Criscito (Sp :() and Volland is flexible, and will push the other 3

Jack
7 years
Some brilliant signings there. The defence at Liverpool definitely needs a shake-up and you seem to have brought in very adequate defenders! Also, Volland is a quality signing!
1
Login to Quote

Arvind
7 years
Some great signings, hope they do well for ya

Liverpool opened their league campaign with a 2-2 draw with Fulham at Craven Cottage. Luis Suarez equalised for Liverpool after Kostas Mitroglu had fired Fulham ahead after only 15 minutes. Straight after the interval, Mitroglu was once again the scorer, and Fulham were 2-1 ahead. Liverpool new boy Kevin Volland scored his first competitive goal for the club, sending a shot low and hard past Stekelenburg in the Fulham goal from all of 25 yards.

Liverpool's next game was a home tie against new feeder club PAOK, in the Champions league play-offs. Liverpool left it late, and an 88th minute strike from Daniel Sturridge proved to be the difference between the two sides at full-time.

Back on home turf, Liverpool welcomed Hull to Anfield in their second Premiership game of the season. The Reds started brightly, and new centre-back Vlad Chiriches put them ahead after 20 minutes, diverting a Ryan Gauld corner into the net with a powerful header. Daniel Sturridge added the second and final goal after 23 minutes, putting the tie to bed early, with a powerful effort from the edge of the box. It was easy then for Liverpool, as they kept possession and the lead.

Liverpool's next test was the away leg of their tie against PAOK. Many people thought that only scoring one goal at Anfield would prove to be their undoing, but it wasn't the case. A Daniel Sturridge hat-trick, and goals from Coutinho and Luis Suarez saw liverpool through 5-2 on the night, and 6-2 on aggregate.

The last game of the month was an away tie to Arsenal; potentially the side's first stumbling block in their quest for the league. With Glen Johnson and Martin Kelly both missing out through injury, Kolo Toure was brought in at Right Back for his first league start this season, as the Reds lined up more defensively than in their previous games, playing a 4-1-3-2. Liverpool knew that a win could see them go top of the Premier League, and the game started brightly, both sides exchanging early chances.

It was Arsenal who went ahead, Jack Wilshere converting a penalty after a rash challenge by Jordan Rossiter on the edge of the box, although there was some debate surrounding which side of the line the challenge came on. Wilshere almost had Arsenal 2-0 up moments later, but quick reactions from Victor Valdes in the Liverpool goal saw his effort diverted for a corner which was dealt with easily.

Liverpool made some changes at the break, switching to a 4-1-2-1-2, and bringing on Ryan Gauld to replace Jordan Rossiter. It worked almost immediately, Kevin Volland scoring after 52 minutes, after an intelligent knock-on by Gauld on the edge of the box. Volland's goal proved to be the equaliser, and the game finished 1-1, capping an unbeaten start to the campaign for Liverpool. 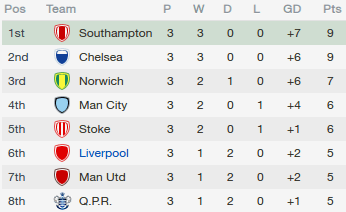 Player of the Month: Kevin Volland