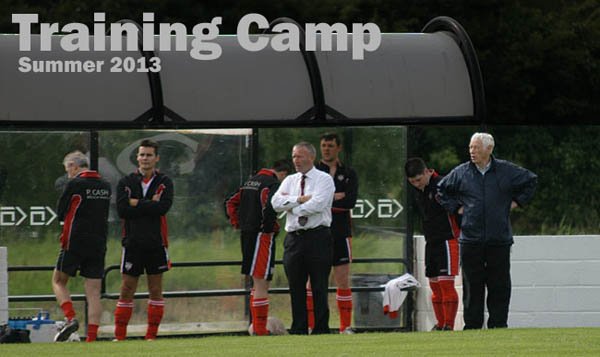 
EXT. KILLYLEAGH DUFFERIN PARK TRAINING GROUNDS – DAY
We returned from Glasgow to more rain but training camp couldn't be delayed any longer. We only had a short time to put our squad together and I needed to assess our strengths and weaknesses before bringing in any new players.

The pitch at the Showgrounds was being re-sodded so camp and our scrimmage matches were held at our training grounds in Dufferin Park. 20 players made the first cut.

The squad performed respectably in their first run out against Glebe North. John Young scored on a penalty in the 75th minute drawing Glebe North 1-1.

Next, I wanted to see the Youth Club play against the Senior squad. The Seniors won both matches as expected, but the Youth held their own. The future looks bright. A stand out for the Youth side was 15 year old Dave Heron, who happens to be Dee’s grandson.

In between the Youth matches, we played against our Alumni team, Killyleagh Legends. It was a lot of fun for the old timers who enjoyed schooling some of our younger seniors. We managed to pull out a 1-Nil win when Aaron Brennan scored in the 60th minute. Then I had the realisation that some of our current players weren't that much younger than the Legends.

For the final two matches, I split the players in two groups. This time it was less about fitness and more about showing me who deserves a spot on the preseason squad. Both matches resulted in a draw (0-0, and 3-3) so it was hard to separate the two sides. Nicky Hagan, who had a goal, was a pleasant surprise, Niall Walsh did well on defense, and Peter Carroll, who was a reserve call-up to even out the sides, shockingly scored two goals.

Jer
6 years
Some nice results, seeing who can challenge for the 1st team and such! Looks like your 2nd team can be there w.your 1st one

Either it means we have depth or it means both my first team and reserves are rubbish.
Login to Quote

BartS
6 years
When is the next upd8 coming? Pleaaaaase, new upd8

Sorry, I am away on holiday and then wall to wall World Cup will keep me busy. That said, I have played through the preseason and should be able to do some updates this soon.
Login to Quote

“Welcome gentleman to our first staff meeting. I’d like to discuss some transfers and the philosophy whereby we will rebuild our squad to compete at the professional level. Any thoughts?”

“We need someone who can control the midfield and distribute the ball to our forwards.”

“We need to focus on our youth and bring them up through the ranks to form a solid core group of players.”

“I feel we should focus on a rebuild from back to front. First, we need a quality keeper who is going to command the area and organize the defense.”

“I agree with all of your assessments and we will address all of your concerns this coming transfer season. We will build a young core group of players for our youth side and nurture them into our senior squad. First we need to focus on our immediate needs, which is consistent defending and increasing ball possession. Like Stephen said, we will start with our keeper and go from there. A veteran playmaker will do us well also so we will begin our search for those two key positions. Does anyone have someone in mind for keeper?”

“Trevor Carson comes to my mind instantly. Born and raised here in Killyleagh.”

“Yes, I know Trevor well. I played with him on the national team and recently at Bury. There is a chance that Bury is looking to offload him to lower their salary budget but I’m not sure we could afford him ourselves. He is a superb keeper in his prime and may not want to take a step back to this division at this stage of his career. Any other ideas?”

“How about we leverage our relationship with Rangers? They have Scott Gallacher available for loan.”

“Yes, good thinking. That’s a possibility. I remember playing with Scott and he did quite well in training sessions, though not really proven as a starting keeper. Perhaps if we can offer him first squad football, he’ll take the bait. Anyone else?”

“It is another long shot, but Maik Taylor is a free agent.”

“Good thinking. Maik is a great lad. Played with him for years on the national side. I’m surprised he is still available to be honest.

“He’s getting up there in years to be sure but he is certainly a grizzled veteran who can organize the backfield.”

“We need a goalkeeping coach. Maybe we could entice him with a staff/player position?”

“That’s it, now you’re thinking outside the box. I like it. Maik could be our starting keeper and work with our youngsters to build for the future.”

“We should be able to attract some decent goalie prospects with him conducting the training.”

“Perfect, find out who his agent is and I’ll call Maik directly to see if he is interested.”

Jer
6 years
Well, that's sorted! GK and a coach on one player! Best of luck mate, missed this story
Login to Quote

Griffo
6 years
This is the best story on FM Scout!

I love Rangers moving! I have always wanted to try that on a save and I really hope that Celtic follows their lead.

The way you portray David Healy is fantastic and the story has enough drama to keep you hooked but it isn't overdone. The exchanges between the characters seem very realistic.

I hope you keep up the fantastic work and you can consider me your number one fan!
Login to Quote

Josh_MU
6 years
Maik Taylor would be a great pick up.
Login to Quote