MJK46
8 years • Edited
AUTHORS NOTE: Hey guys just to let you know I am still doing my Paris FC story. I just want to run another story along that so I can have more to write about and have two amazing saves going at the same time.

For this I am one of the greatest footballers ever to come from Sweden and play in Scotland. You are probably thinking Henrik Larsson..Well you are right. This story will you through Larsson's career as a manager. Larsson was one of the best players to play the game of football, but can he manage? Read on to find out!!
The King of Kings returns to Scotland...........

Celtic FC Legend Henrik Larsson has just recently announced his intentions on returning to Scotland to continue his managerial career. The 42 year old Swede currently manages Swedish side Högaborgs BK where he spent several years with as a player.

In an interview with a local newspaper the former star was quoted in saying, "I am enjoying coaching here but I wish to someday return to Scotland and manage there. He went on saying, "I would love to manage Celtic but Neil is doing a great job with the team and I want a challenge."

Larsson is most notably known for his time with Celtic FC where he played for the team from 1997-2004. During these years he would go on to make 221 appearances while scoring 174 goals. After his stint in Glasgow he would move onto Barcelona where he would win Champions League in 2006.

As more information is available we will keep you updated.
Login to Quote

Peter Lawwell has stated that the club is not interested in the services of Henrik Larsson. A few weeks ago the Swede announced that he was looking to manage in Scotland to kick start his coaching career at a higher level. At this time he is still open to other jobs.

"We appreciate Henrik's desire to manage for us but we still have faith in Neil right now. If something comes up we might call him but as I stated Neil still has a job."- Peter Lawwell

Strong words coming from Celtic's Chief Executive who has been questioned by many fans lately. Many Celtic fans have started to lose hope in both Lennon and Lawwell and want change soon. Henrik Larsson would be the perfect replacement in some fans eyes.

At the same time it makes sense that Celtic are not looking at Larsson for the job. Other than a limited managerial experience the board might want to shy away from hiring another former player. With Lennon it has been an up and down four years.
Login to Quote

Josh_MU
8 years
Some good updates so far! Will be following.
Login to Quote

MJK46
8 years • Edited
Josh: Thanks man
TodayAtTomorrow: Ill give you a little hint. They are in Central Scotland.
Login to Quote

His dismissal was announced around 1100 BST, following a meeting with Celtic chairman Ian Bankier at the clubs training ground.

Lennon,42, managed Celtic from 2010 replacing Tony Mowbray. During his three years he lead the club to two league championship, 2 Scottish Cups and a trip to the Round of 16 in Champions League. Despite his record the Northern Irishman seemed to lose control of the squad at times as well as his temper.

The reason behind his sacking is not known at this time but it is believed that he and the board had a disagreement over transfers. Recent reports have Victor Waynama and Gary Hooper leaving the club in the summer. If those rumors are true the team could end up struggling.

Many fans have been mixed with this decision. In recent times Lennon has became a cult figure to many supporters. He even has songs about him. There are some fans who are please he is gone. The biggest complaint was that Lennon spent too much time on social media giving into childish antics from followers. This was all apart of his attitude that caused a few meltdowns to the fans after matches.

"Neil (Lennon) has done a great job with the club and we thank him for his continued service with the club in the last few years. Sometimes you just need change and this is what it has came to. Lennon will do good somewhere else but Celtic is ready to move on."- Peter Lawwell

The Celtic FC job is one that many managers would like even though there is that issue of the league not being as good. The club is looking to increase their rep in Europe and continue the run like season. As of right now the candidates are unknown.
Login to Quote

JamieBhoy93
8 years
Oh wow, Looks like this is going to be good! Can't wait for the next update.. No one does Celtic so i'm deffo looking forward to this.
Login to Quote


As June is starting and so is the inaugural season of the revamped Scottish system I have been patiently waiting for a call. Since Celtic said no and I understand I put my name out for any team. At this point I don't care who I manage well except for Rangers. I am no bigot I just feel it would be a bit awkward to manage them after being known to obliterate them in matches. Out of nowhere the phone rings.

"Well hello sir how have you been?" (I say to myself hmm do they want me in another charity match?)

"If you would like I would like to fly you out to Glasgow for an interview, if you haven't heard Neil was let go a week ago.

"Yes I know and sure I'll see you then."

A day or two passes and it is finally the day. I am back in Glasgow for my Interview. I walk into the clubs main office at Lennoxtown and I am overjoyed that I have been chosen to interview. Speaking about the walk and drive in. It was nuts with the media and supporters hanging around. Security had to take me in the back way. After waiting about 15 minutes they are ready for me. Peter calls me in. 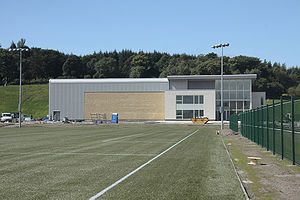 "Good afternoon, how was your trip?" he says, smiling at me as I near him to shake hands.

"It was crazy, thank you for this opportunity"

"No worries mate, it's great to see you back."

"Thanks for the kind words can we get down to business?"

"Ah you are someone that gets right into work, I like that. Well I picked you to interview for a few reasons. I have seen what you have done with your current club and I am impressed. Also the name Henrik Larsson and Celtic go together, we need people and having you will help attendance."

"Well sir if I may, I don't want to be here if you are planning on using me as a marketing tool, I am serious about managing especially in Scotland. As much as I love Celtic I am here on business. We need to win as much as we can. I want this team to have more trophies than Oldco.

"So with that I think we could work well together. A few things first. I expect you to bring this club the league titles as well as trophies. Also you need to go far in Champions League. Does this all sound good to you?"

"Good, is there anything else that you would want?"

"Well if I take this job my son (Jordan)will have to be a player, now I am not saying starter or anything, he just needs to be under contract."

"That is fine for me, I wonder if he can be the next version of you?"

"Well with that here are the papers, you will start next week. The contract is for two years. Good luck and congratulations."

"Thank you I look forward to this."

So Now I am the new manager for Celtic. It feels good to be back in Scotland now managing my old club. Hopefully I do well enough with this club to take them and the fans to places they have never dreamed of before.
Login to Quote

Last night Celtic told everyone on social media to prepare for a big announcement in the Moring. Well morning has come and gone. Around 10AM the members of the board made the announcement that club legend Henrik Larsson will be the clubs 21st manager in club history. He also becomes the first non Briton to manage the club since Jozef Vengloš who was in charge between 1998 and 1999.

"We here at Celtic are proud to bring home one of the greats, when we interviewed Henrik he was very excited about the possibility of taking this club forward. His ambition is something we really are in love with.- Peter Lawwell

Larsson inherits a pretty good squad that was previously lead by Neil Lennon. Last season Celtic had a memorable 125th anniversary. Last season Celtic completed the double for the first time in years as they won their second straight league title and won their 36th Scottish Cup. Champions League was another success as the club made it to the Round of 16.

The appointment of Larsson should really energize the global Celtic fanbase. This appointment should help increase sellouts at Celtic Park. Last year the highest attendance was 59,168 against Spartak Moscow in a December Champions League match. Will Larsson be the one to get Celtic to the top of the footballing world? Only time will tell, good luck to him.
Login to Quote

TylerK
8 years
I'm assuming Larsson was good? I don't think I was alive or I was very young when he played for Celtic.
Login to Quote

He was a legend. Played at Celtic and Barca. Here is a video of his goals with Celtic.

TylerK : I'm assuming Larsson was good? I don't think I was alive or I was very young when he played for Celtic.

He was for Swedish football in the early two thousands what Zlatan is today but appeared to be a much nicer guy.

Like the story so fare. Will be following.
1
Login to Quote