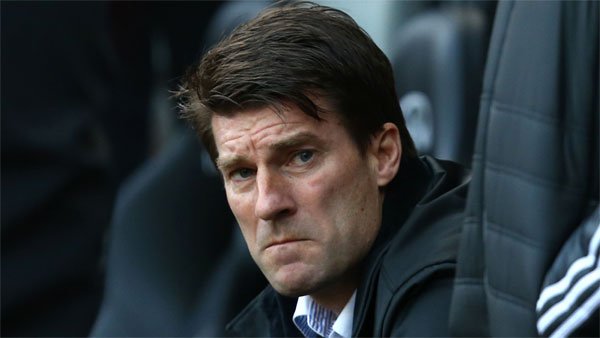 Swansea City have today announced they have sacked the clubs manager Michael Laudrup, with the board citing reasons such as players coming to blows and public disputes between Laudrup and some members of his squad. Social Media site Twitter has today seen a number of it's users defend Laudrup, saying "He never started any fights with players", and currently the number one trend world-wide on the site is "#Justice4Laudrup". It has come as a shock to many Swansea City fans after the Dane guided them to 9th in the Premier League last season. 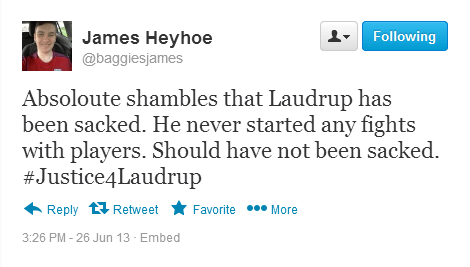 Above, one of the many tweets that have been posted on Twitter in defence of Michael Laudrup.

Laudrup joined Swansea in June 2012, and immediately brought his presence of managing in Spain to the club by bringing a style of football which included his players keeping possession, counter-attacking the other team, slick and fluid movement when on the ball, a similar tactic to the famous 'Tika-Taka'. He then signed players from Spain, including bargain buy Michu, who signed from Rayo Vallecano for a fee of £2m, scoring 18 goals in 35 games. Pablo Hernandez, Jonathan De Guzman and Chico were also signed from La Liga, as Laudrup began to build his team for the season. In February 2013, Laudrup appointed the man he signed during his reign at Brondby, Morton Weighorst, as his assistant manager, and stated he believed he could one say himself become the manager of Swansea City The 48 year old guided The Swans to their first ever major cup final, after beating reigning European Champions Chelsea over two legs in the Semi Finals of the Capital One Cup, before going on to beat Bradford City 5-0 in the Final. In March, he then signed a new contract with the club until 2015, which like his predecessor Brendan Rodgers, included a release clause for if any other team wanted to hire his services, and the clause was rumoured to be around £5m. He then managed to guide the club to a 9th placed finish, their highest ever league finish.

Chairman Huw Jenkins has released a statement to the press to clarify the situation at the Liberty Stadium. "Me and the rest of the board at Swansea City would like to send an apology to the fans after our sacking of Michael Laudrup, but we felt that, with the best interests of the club in heart, sacking Michael was the right thing to do to protect the image of the club, as we feel that all these disputes between him and the players were harming the image of the club too much, and we need to protect the clubs image so we do not turn off potential sponsors, players or investors. Obviously, Michael is a hugely talented manager, his style of football is one to admire and we believe any team would be lucky to have him as their manager as his football is attractive, he keeps a cool head on the touchline, can make smart transfer business when making his targets and is just someone who you can have a great business relationship with. All of us at Swansea City would like to express our gratitude to the job he has done at the club over the past 13 months, which includes winning the Capital One Cup, and we wish him the best for the future as he continues his managerial journey".
Login to Quote

Justice
8 years
Good luck, hopefully you can make a grand story out of this

Josh_MU
8 years
Very nice start James! I enjoy watching Swansea play and I will be following this one! #Justice4Laudrup
Login to Quote

Thanks Niko! First comment from a mod before on a story i think for me! Hoping i can make it grand too!
Login to Quote


Thanks Josh! And well the tactic i use gets every team i play with playing well!
Login to Quote


Thanks mate:)
Login to Quote

Britton: We Need To Get Behind New Manager 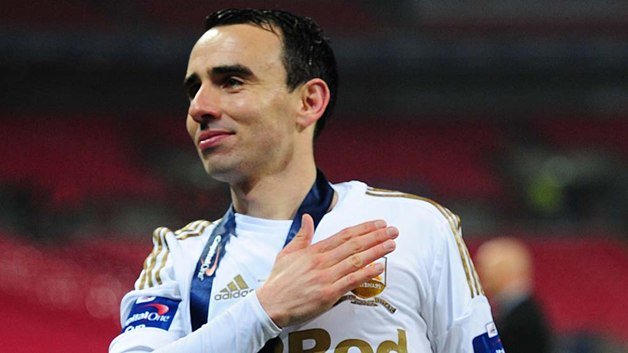 Britton, above, after Swansea beat Bradford 5-0 in the Capital One Cup

Swansea City midfielder Leon Britton has today came out and said that he and his teammates will need to get behind and back the clubs new manager for when he is appointed. Britton has been at Swansea since 2011, making 94 appearances and scoring 1 goal on his return to the club, which is his second spell at the club after he originally played for them between 2003 and 2010, where he made 270 appearances for them, scoring 15 times, before leaving for Sheffield United on a free transfer after his contract expiry. He made 24 appearances for The Blades in the 2010-11 season, but then departed in the January transfer window to return to South Wales with Swansea, citing the fact he had played under four managers in 5 months, unable to repeat his form that he showed at Swansea and that he was not able to settle in South Yorkshire as his reasons for leaving the club and that he knew Swansea was the club for him.

During his youth career, Britton spent 7 years between 1991 and 1998 in the Arsenal youth academy, before leaving to join West Ham. He spent 5 years at Upton Park, failing to make an appearance for the first team, although he did enjoy a loan spell with Swansea City in the 2002-03 season, where he made 25 appearances for the team before making the move permanent at the end of the season. He the went on to play for the club another 270 times and scoring 15 times, and during his seven years at the Liberty Stadium, where the Englishman helped the Welsh side rise through the pyramid of English football from League Two to the Championship. His move to Sheffield United did not work out as planned, as he made 24 appearances before returning to Swansea in January, saying his departure from Swansea was a "mistake". His return to Swansea then saw him help them claim promotion to the Premier League, making 94 appearances and scoring once as he can add to his CV that he has played for the club at every level in English Football.

Speaking to talkSPORT radio, the 30 year old midfielder, who is a leading candidate to become the clubs new captain under the eventual new regime, spoke about what he and the other players at Swansea are hoping that will happen in the near future. "As soon as news broke about Michael Laudrup's sacking, all of us players here rallied around as we felt we needed to discuss the matters of what will happen with all our futures when the new manager arrives at the club, as their has been some recent arrivals at the club who were signed onto the Michael Laudrup project. When we rallied together, we spoke to the new signings, who are Wilfried Bony, Jonjo Shelvey, Jose Canas and quite a few others. They were all convinced to join the project as part of the vision shared by the club and Michael Laudrup, and me and some of the other more experienced players including Garry Monk and Ashley Williams sat down with all of them and thankfully we managed to convince them that they made the right decision in joining Swansea, and that they can help lead our club to glory under the new manager. All these reports about Michael losing the backing of the dressing room are untrue, as we were always behind Michael 100% and never had doubt in his managerial abilities as we knew he could help us grow as a club and as players and lead us to becoming a stronger team in the Premier League. We have all said though that when the new manager comes in, we will back him 100% just like we did with Michael, as this season we have the Europa League to look forward to aswell as another season in the Premier League, and we know coming into a new club will not be easy, especially when playing in Europe too, and he will want to bring in some of his own players so we cannot afford to judge his decisions and we will need to help him settle as fast as possible. Now all's we can do as players is just wait for our new boss to be appointed and hope for the best in the future".
Login to Quote


Thanks! will need it tbh
Login to Quote

Thanks mate! My stories never really take off so i'm hoping it will all change with Swansea. Will keep trying to make sure the writing quality is good enough
Login to Quote


Thanks
Login to Quote

You are reading "Swansea City - Dens I Generne".