mpejkrm
6 years
Hello everyone and welcome to my first story on FM Scout. I'm a longtime FM Player and have been writing stories for FM and many other games for a long time. I have a few stories over at FM Base and decided to come over here after reading a couple of these stories.

So for this save I will be taking over FC Ararat Yerevan, part of the Armenian Premier League, also known as as the Bardzraguyn Khumb in Armenian. Ararat play in Yerevan, the capital and largest city of Armenia, but have struggled the past few seasons. They finished in seventh in the eight-team league last season. It's a pretty poor club so it will take some work to get it up to state. The goal of this story is to eventually have Ararat a perennial contender in the APL and eventually in the UEFA Champions League.

Before I start writing the story, a quick rundown of the APL rules and regulations:

It's a 28 game season (you play each other team four times).
Top team qualifiers for UEFA Champions League.
Teams 2-4 qualify for UEFA Europa League, however the fourth team depends on the winner of the Armenian Independence Cup.
Bottom team is relegated.
1st place gets just under 100K pounds in prize money, then scaled down to 8.5K pounds for the bottom team.

Hope you all enjoy the story!
Login to Quote 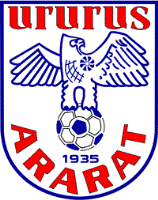 FC Ararat Yerevan have hired the relatively unknown 25 year-old American on a £775 p/w contract that runs through the end of the coming season. Ararat, who finished 7th in the eight team Armenian Premier League last season, have indicated that they wish for a safe mid-table finish this season.

Collins, 25, was born in Minneapolis (MN), United States, on December 14, 1987. Collins graduated from West Virginia University with a degree in athletic coaching education. Collins had interest from many small clubs across Europe, but chose to come to Armenia to manager Ararat.

"I'm pleased to join such a reputable club. Ararat have a long history of success in a very strong, competitive football league. It's an exciting time to be at Ararat."

"I believe that we can compete for a Europa League qualification spot this season. This squad has lots of talent and can really play. It is going to be tough, however. All of the other teams in our league are very strong, and can really play. We are going to need to be at our absolute best to win."

"Unfortunately we do not have any money for transfers, but that is okay, as I feel the squad is strong enough as is, and that we should devote our money to paying our players' wages."

"I'm excited and ready to get going here at Ararat. It's going to be a lot of fun and it's a great time to be here. Thank you."

Collins will take the reigns for his first match in just four days when Ararat host Romanian side Steaua Bucure?ti in a friendly.
Login to Quote

I made one with Pyunik Yerevan on FM13, it was the best save I've ever done. You'll love it in Armenia, I'll be your #1 follower

Bantams: thank you as well, i hope you enjoy it

HamdoudliLFC: Awesome! I'm hoping to have a good time in this save. And I'll take a look at him.

You are reading "FC Ararat Yerevan - Journey to European Domination".