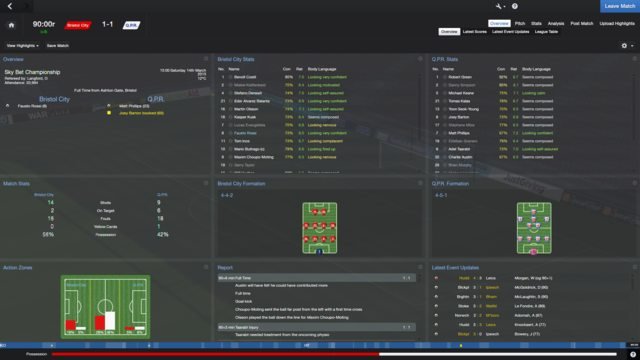 Manager's review
Booy made only one change to the side as Choupo-Moting was fully recovered from his twisted knee to replace Matej Vydra up front. City took the lead against fellow FA Cup semi-finalist QPR within 8 minutes but were pegged back to 1-1 before the half hour mark. No team could then produce enough quality to claim a win in the match.

Transfer News
Among City's batch of new youth players is Russian 15 year old Ivan Konoplev. The central midfielder will work with the U18 squad over the next few years to see if he can reach the potential to be a 1st team squad member. 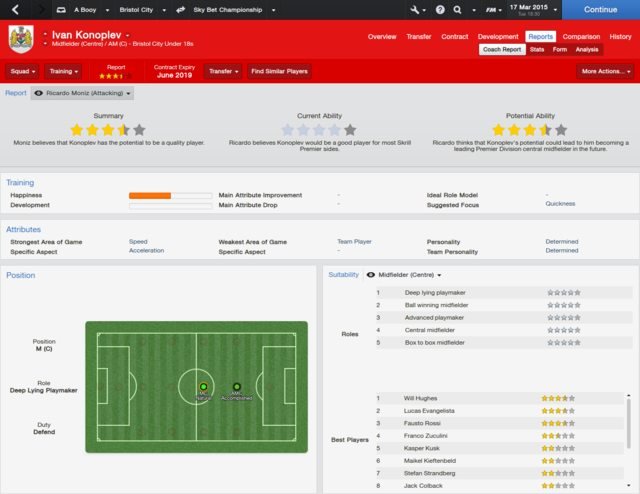 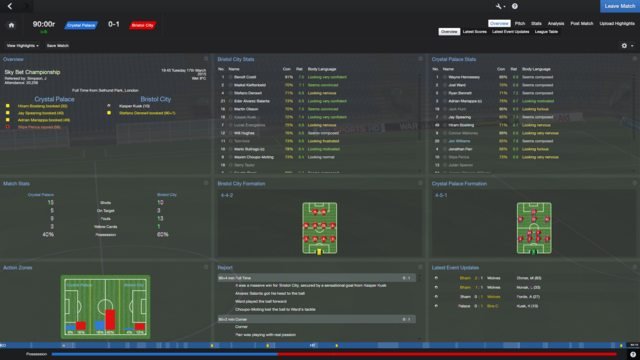 Manager's review
Booy made one change to the side as Rossi was given a rest and Will Hughes took his place in central midfield. City won this top of the table clash thanks to a wonderful strike from Kasper Kusk in the 10th minute. At times City fans had their hearts in their mouths after that but they held on for the next 80 minutes to claim all three points. City are now 9 points clear of Crystal Palace in 2nd and 12 points clear of QPR in 3rd in the Sky Bet Championship. The next game for Bristol City at home to Watford will be Andrew Booy's 100th game in charge of the Robins. 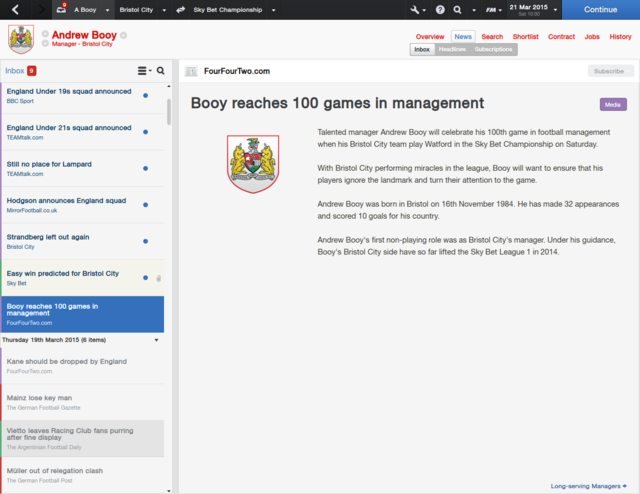 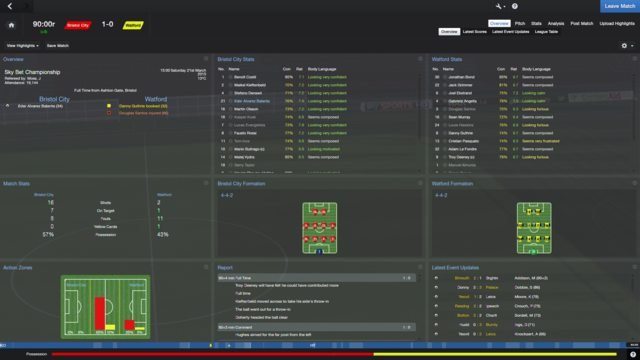 Manager's review
Congratulations need be given to manager Andrew Booy who managed to guide his side to victory on his 100th game in charge of Bristol City. He made two changes to the side as Rossi returned for Hughes and Vydra played against his old club in place of Choupo-Moting. MOTM Alvarez Balanta got the only goal of the game from a Lucas Evangelista corner to take his tally to 5 goals in the 15 matches he has played since signing for the club in January.

Transfer News
Bristol City have signed 15 year old Martin Kaspar from Czech side Sparta Prague for 1.2 million. The young right back will join Bristol City in the summer when there will be a more detailed article on the Czech starlet. 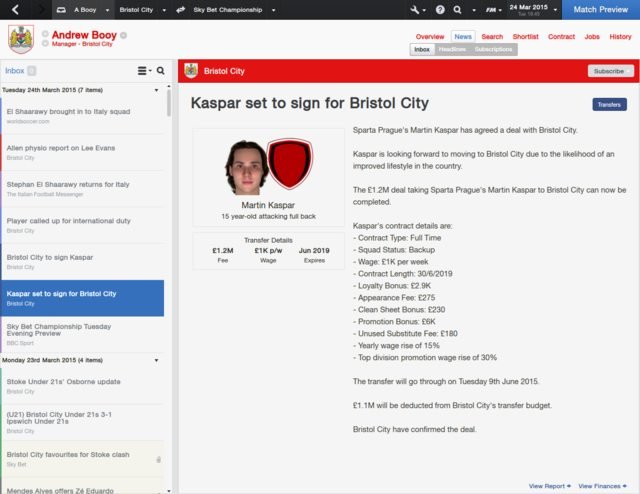 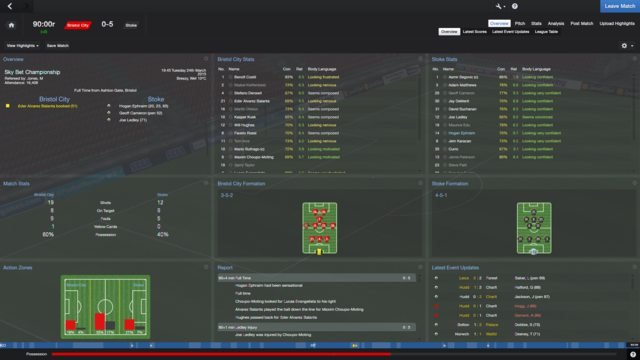 Manager's review
Bristol City had an awful day at the office as they lost embarrassingly at home to 18th place Stoke. The scoreline brought back memories of the horrible 6-0 loss to Peterborough at the end of last season in League One. Booy made two changes to the team as Hughes replaced Lucas Evangelista and Choupo-Moting replaced Vydra. The amount of midweek fixtures finally had an effect on this tired City side but manager Andrew Booy was quick to highlight that the scoreline was not a fair reflection on a match in which City had 60% possession.
Login to Quote 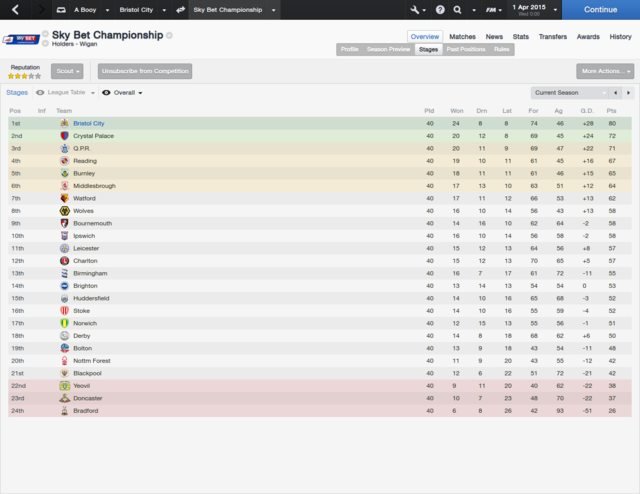 It was a poor month for City players on a whole and Fausto Rossi was the only player to obtain an average rating of over 7.0. He scored two goals in the month but there are rumours within Bristol City that the top rated player could lose his 1st team place to loanee Will Hughes who is progressing superbly in training.

Highly commended
Lucas Evangelista - average rating 6.94
March showed signs that young Brazilian Lucas Evangelista is beginning to show signs of settling in to his surroundings in Bristol. He has performed consistently if not outstandingly in March and got an assist from his new role as primary corner taker for City.
Eder Alvarez Balanta - average rating 6.92
Alvarez Balanta, like fellow South American Lucas Evangelista, is beginning to settle at the heart of the Bristol City defence. He had a consistent month scoring one goal in the MOTM performance against Watford.
Login to Quote 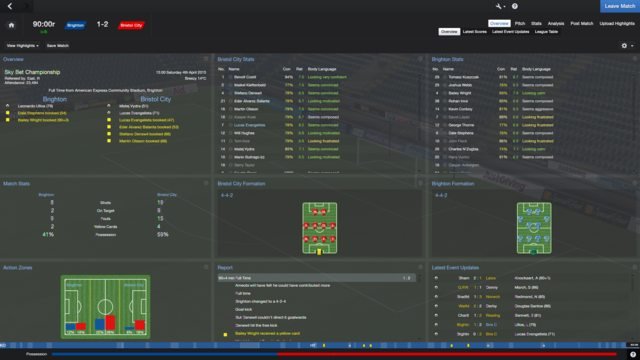 Manager's review
Booy made two changes to the side that got thumped by Stoke two weeks ago. Lucas Evangelista replaced Rossi and Vydra replaced Choupo-Moting. Both replacements got on the scoresheet and it was MOTM Lucas Evangelista with a match rating of 8.20 who was the best player on the park by some distance. The only concern for manager Andrew Booy is the dip in form of captain Mario Buitrago who has not scored in 5 games, but did win his 1st cap for Colombia in the March international break. With this victory City guaranteed a playoff place in the Sky Bet Championship with 5 matches remaining, but surely the title and promotion is within touching distance!!!!
Login to Quote 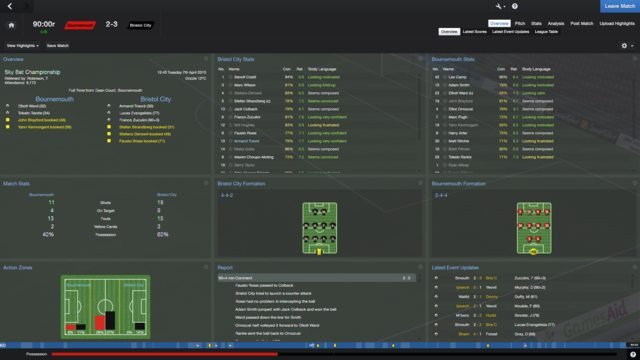 Manager's review
With one eye on the FA Cup semi final in four days time Andrew Booy named a largely 2nd string side for this Championship tie. The lineup was as follows: 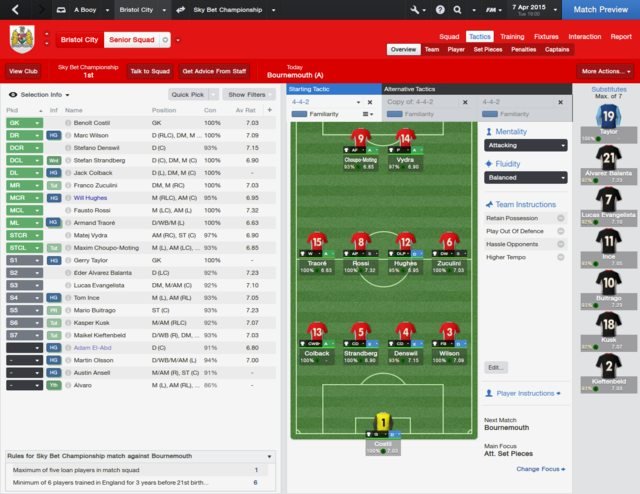 The City '2nd team' did not let their manager down as they performed admiraly and were very unlucky to find themselves 2-1 down with 15 minutes remaining. However a goal for substitute Lucas Evangelista and then a stoppage time winner from Franco Zuculini meant City now only need one win from the four remaining Championship fixtures to secure both the title and promotion. Next up for City a showdown with Southampton at Wembley for a place in the FA Cup Final!!!!
Login to Quote 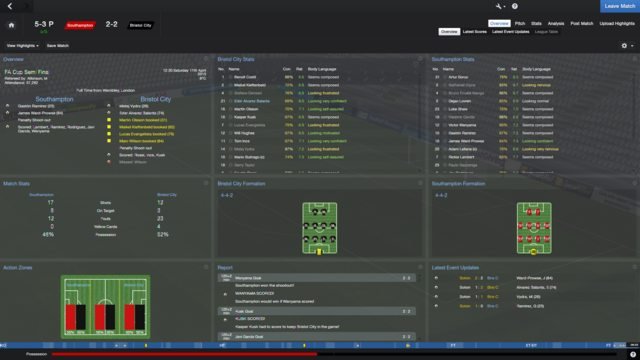 Manager's review
There were 57,292 spectators at Wembley to watch what turned out to be a spectacular FA Cup semi-final. The two teams lined up as follows: 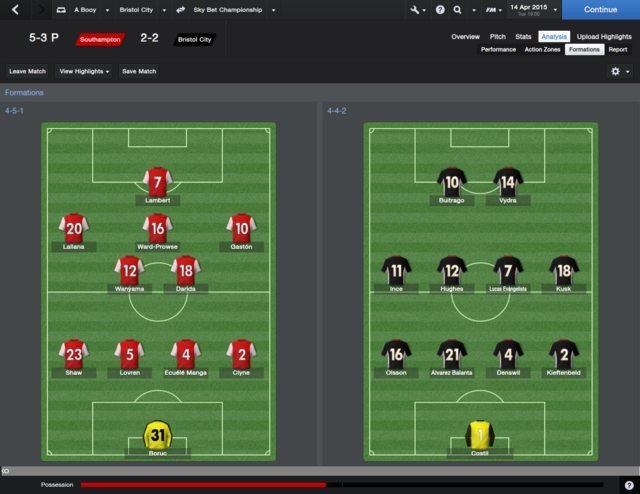 City were clear underdogs and for the first 25 minutes of the game look overawed by their Premiership opponents. The attacking midfield trio of Lallana, Ward-Prowse and Ramirez were creating chances and in the 25th minute Ramirez scored a tap-in from a Lallana left wing cross. The goal spurred Bristol City into life though as they instantly replied. Lucas Evangelista intercepted a Boruc throw out and headed the ball to Buitrago who played a pinpoint pass to fellow striker Vydra who scored a fantastic goal on the half volley. After the equaliser City became more confident and matched Southampton blow for blow until MOTM Alvarez Balanta put them ahead when Southampton were unable to clear a corner in the 74th minute. With an FA Cup final in his sights Andrew Booy brought on Marc Wilson to sit between the midfield and defence but it was Wilson who fouled Lambert on the edge of the area in the 84th minute. Ward-Prowse scored a magnificent goal from the free kick. No team could create much in injury time and it almost looked as if both teams were happy for penalties to decide their fate. Unfortunately it was Marc Wilson who was the only player to have his penalty saved and City lost the shootout 5-3.
Login to Quote 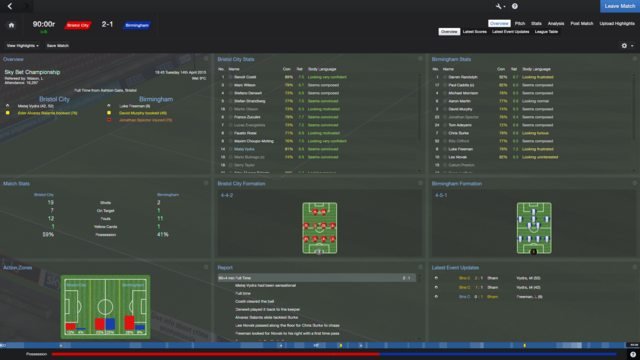 Manager's review
After their extra time exertions against Southampton only three days ago Booy brought in Wilson, Strandberg, Zuculini, Rossi and Choupo-Moting to freshen things up. City went into the game knowing that a victory would guarantee the Sky Bet Championship title and despite going 1-0 down two goals from Vydra ensured that City lifted the trophy in front of an ecstatic Ashton Gate crowd.
Login to Quote

With still three games remaining of the 2014/2015 season Andrew Booy has lead his team to their 2nd league crown in consecutive seasons. 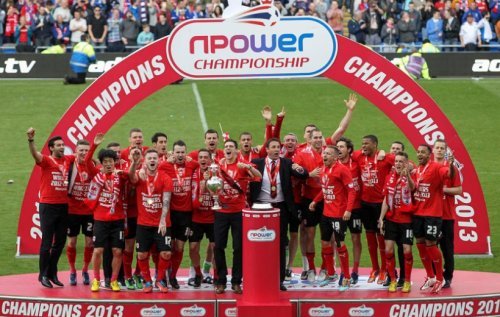 Bristol City have dominated the Sky Bet Championship for the majority of the season, topping the table ever since the midway point of the season which is highlighted in the graph below: 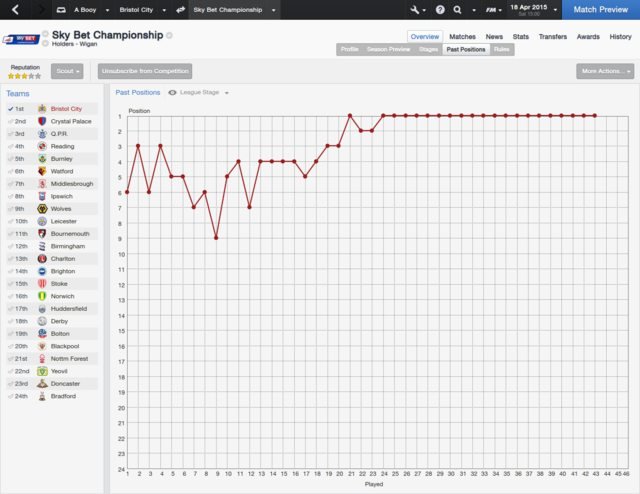 If they win their last three games they will equal their points total for last season of 98 points. A full review of the season will follow later but in a press conference held with captain Mario Buitrago and manager Andrew Booy the following was said:

Mario Buitrago in response to questions about his personal goalscoring achievements, 'I am delighted to have contributed over 30 goals in both a successful League and FA Cup season but the season is not over yet and I am only three goals behind Piotr Paryszek in the League One top scorer charts so that is still a goal for this season. I would like to thank Andrew Booy for bringing me to such a successful club and having faith in my abilities, I can't wait to lead my team out in the Premiership next season.'

Andrew Booy was quoted as saying, 'this success is down to the fantastic squad of players and staff I have at my disposal here at Bristol City. I am so proud of this team and believe that we can not only survive but flourish in the Premier League next season.'
Login to Quote 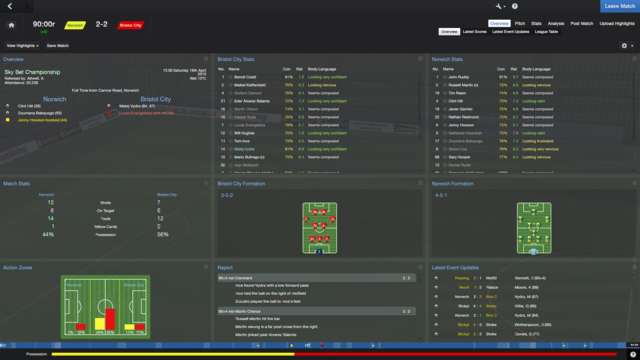 Manager's review
Manager Andrew Booy was able to name his strongest possible starting 11 for this fixture so there were recalls for Kieftenbeld, Alvarez Balanta, Kusk, Hughes and Ince for Wilson, Strandberg, Zuculini, Rossi (who picked up a nasty looking gashed leg in the last match) and Choupo-Moting. The team performed poorly and found themselves 2-0 down with only 10 players on the park with 10 minutes to go thanks to Lucas Evangelista's reckless two footed tackle. However, Booy through everything at Norwich for the final 10 minutes and the 2nd brace in two matches for Vydra ensured City escaped Carrow Road with a point, a commendable fight-back in the circumstances.
Login to Quote 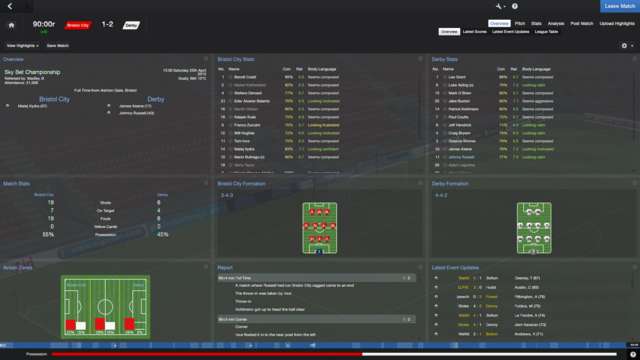 Manager's review
Booy made one change to his side as Zuculini came in for the suspended Lucas Evangelista. City dominated the game but couldn't find the cutting edge in the final third and went down to a surprise 2-1 defeat to a Derby side they demolished 5-0 in the FA Cup earlier this season. Vydra was on target again for City to get his 6th goal in four matches, finishing that meant the Czech striker came 3rd in the Sky Bet Championship player of the month award for April. Only one game of the season left for the Robins at home to relegated Doncaster, lets hope Andrew Booy's men can finish on a high.
Login to Quote 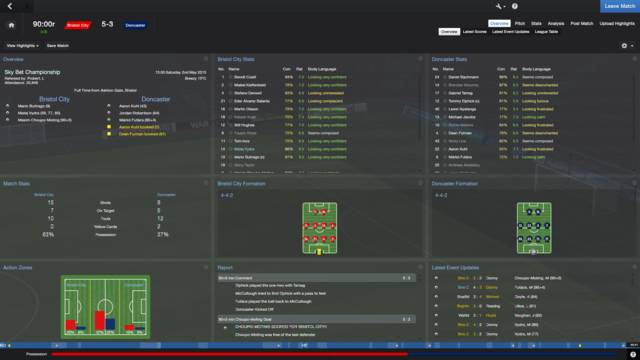 Manager's review
Andrew Booy made one change to the side for the final celebratory home game of the season as Rossi came in for Zuculini. The City side were determined to see the season off in style as goals from City's three strikers, including a 2nd half hat trick from MOTM Vydra, left the Ashton Gate faithful in a buoyant mood for the summer ahead of their Premiership campaign next year.
Login to Quote 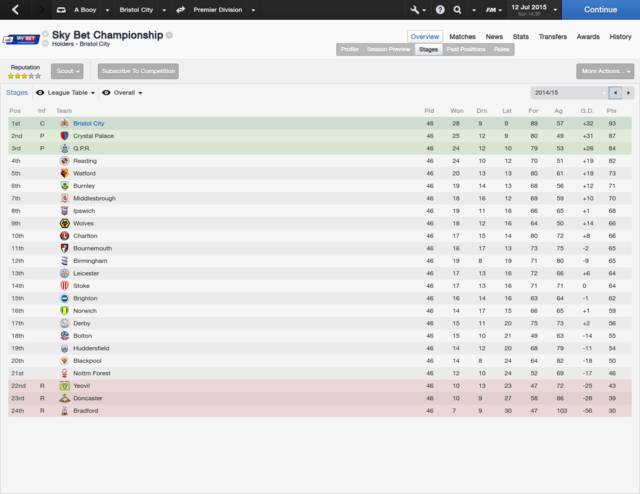 The young Czech striker was simply outstanding in the last month of the season. He scored 10 goals in 7 matches taking his tally for the season to 22 goals in 29 starts this campaign. He also came 3rd in the Championship player of the month award.

Highly commended
Mario Buitrago - average rating 7.26
The City captain had a poor month on the scoring front only getting one goal in the last game of the season but he was still a top performer providing 5 assists for strike partner Vydra.

Eder Alvarez Balanta - average rating 7.16
The Colombian international had another good month for City in particular his MOTM performance at Wembley in the FA Cup semi final where he scored a goal and was unlucky to be on the losing side after the penalty shootout.
Login to Quote 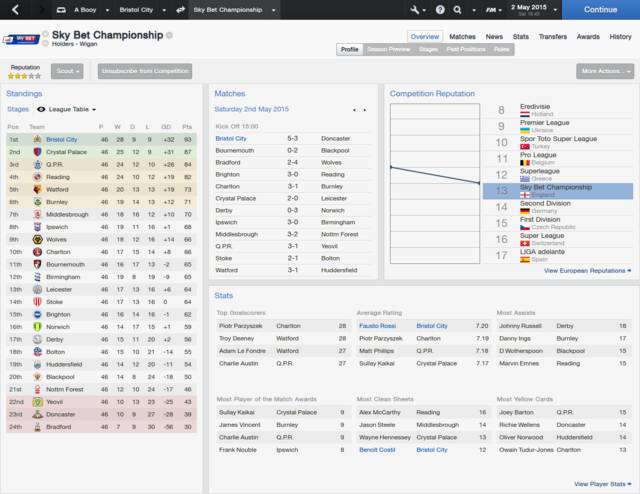 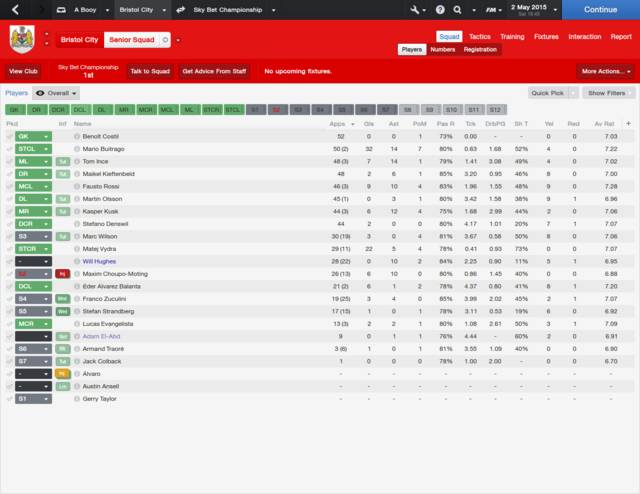