Manager's review
Booy named exactly the same 11 that started against Leicester in the previous game. The Bristol City manager's hands were in his head after 7 minutes as captain Marc Wilson played an awful back pass to City keeper Costil which Forest's Pilkington pounced on to open the scoring. Things got from bad to worse for the Robins as Strandberg was beaten to easily by Forest striker Djebbour to make it 2-0 to the home side. However Booy's side then turned things around in a tremendous comeback against all odds. Rossi scored a fantastic volley from a Will Hughes free kick just before half time and then in the 2nd half Strandberg atoned for his earlier error to score from a Will Hughes corner. It was then left for super sub De Lanlay to complete the turnaround with 10 minutes remaining from another Hughes pass. Will Hughes completed a hat trick of assists on the day and deservedly picked up the MOTM award with a match rating of 8.70.
Login to Quote Manager's review
Booy made two changes to the side as De Lanlay came in for Kusk after his impact from the bench last time against Nottm Forest. Buitrago was also dropped after his recent poor form and Matej Vydra was given a chance to impress from the start. These changes however proved ineffectful as yet again Bristol City failed to produce in front of their home fans. In this defeat no City player managed to get a match rating higher than 6.90 and the result meant the team dropped out of the playoff places to 9th position in the Championship table.
Login to Quote Manager's review
Following the disappointing home loss to Burnley Andrew Booy recalled Kasper Kusk and Mario Buitrago to the team for De Lanlay and Vydra. The change proved to be successful as particularly Kusk (MOTM with 9.00 rating) was the difference between the sides in a 7 goal thriller at Portman Road. This result followed the current trend as City again got a result on the road in the league. Surprisingly their away record this season reads won 4 drawn 1 lost 0 while their record at Ashton Gate reads won 1 drew 1 lost 3.
Login to Quote

During the month of September the young English midfielder on loan from Arsenal established himself in central midfield with Fausto Rossi. The deep lying playmaker was in charge of many set piece duties and contributed 4 assists this month (3 of them in one MOTM performance against Nottm Forest). He also came runner up in the Championship player of the month award.

Highly commended
Fausto Rossi - average rating 7.22
The Italian playmaker continued his impressive start to his Bristol City career by being an ever present with Will Hughes in the City engine room this month. He added a further two goals to his name meaning he has 4 goals this season which makes him the joint highest Bristol City scorer so far this season.

Tom Ince - average rating 7.12
Ince was a consistent if not outstanding performer this month and has played every possible minute for City this campaign. He has been a constant threat down the City left wing and if the Bristol City strikers can find their shooting boots anytime soon he will surely add to the 5 assists he has to his name so far this season. Manager's review
Booy made two changes to the side as Zuculini started for the suspended Rossi (who picked up a 5th caution of the season last time out) and Denswil returned from injury to replace Strandberg. This was City's 1st victory at home since the opening day of the season and to be honest it was a routine result. It was particularly pleasing that Mario Buitrago ended over 10 hours of football without a goal with a fantastic finish in the 69th minute. Next up for City is a clash against top of the table Middlesbrough at The Riverside Stadium in 3 days time.
Login to Quote Manager's review
Andrew Booy had to make a string of changes to his starting 11 for this vital Championship clash as the fixture pile up meant some of his squad needed a rest. Strandberg replaced Wilson in defence, De Lanlay replaced Ince, and Rossi returned from suspension and Will Hughes dropped to the bench. The changes didn't disrupt City too much though as they had the lead within 4 minutes thanks to a De Lanlay tap in from a Zuculini shot that was saved. Against the run of play Middlesbrough scored two goals in the 1st half, the 2nd from a dodgy penalty decision. This didn't stop the Robins coming out all guns blazing in the 2nd half and they dominated the game both in terms of possession and shots on goal. In the end they had to settle for a draw thanks to a Buitrago tap in after good work from Choupo-Moting on the left side.
Login to Quote Manager's review
After a brief international break Booy was able to name his strongest possible 11 for this match which includes recalls for Ince, Wilson and Hughes. The team didn't disappoint putting on a commanding performance against playoff hopefuls Crystal Palace. The defence was particularly impressive and kept a 1st clean sheet for the Robins in 8 matches. All of the back four had a match rating of over 7.30 and goalkeeper Costil was MOTM with a match rating of 8.00. Mario Buitrago also impressed scoring for the third game in succession.
Login to Quote 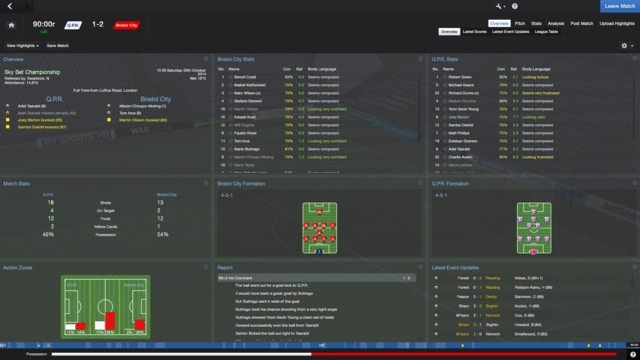 Manager's review
Bristol City named their strongest starting 11 for the 2nd match in a row and began the game on fire. In fact Andrew Booy was delighted as Choupo-Moting opened the scoring within 16 seconds of the kick-off, a new club record. It was clearly a relief for the Cameroonian striker as it was his 1st ever goal for the club. Things got even better for the Robins as Ince scored a 2nd to put City 2-0 up after 5 minutes. QPR got one goal back almost immediately from an absolutely stunning long range effort from Adel Taarabt. Then to finish the 1st half Costil saved splendidly from a Taarabt penalty which Booy thought was justice as it looked like a wrong penalty award from the referee. Happily for Andrew Booy the 2nd half was not as exciting as the 1st as City held on for a well deserved victory.
Login to Quote Manager's review
Andrew Booy played the same team that had started the previous two fixtures and done so well for a home fixture against bottom of the table Bradford for what should have been a routine 3 points. City started strongly and scored a fantastic goal through a 28 yard free kick from MOTM Kasper Kusk which actually came 3rd in the Sky Bet Championship Goal of the Month award for October. 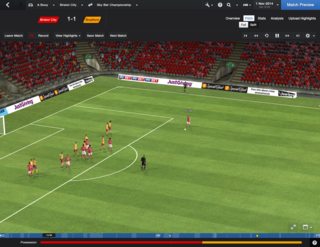 After that though City were unable to get the 2nd goal that would have killed off the game and Bradford equalised in the 2nd half from one of only 2 shots that they had on target all game....overall definitely two points dropped for the Cider Army.
Login to Quote The Bristol City goalkeeper was consistent in October conceding only 5 goals in the 5 games that were played. His particular highlight was his MOTM performance against QPR were he saved a penalty which meant his side could go on to win the match 2-1.

Highly commended
Kasper Kusk - average rating 7.12
After a slow start to his City career the young Denmark right winger was a constant performer on the wing for the Robins in October. His free kick against Bradford was spectacular and reward for his work on dead ball situations on the training ground.
Mario Buitrago - average rating 7.08
After a poor month of September where Mario went through a dry patch in front of goal Buitrago found his shooting boots this month. He contributed 3 goals this month as City went unbeaten and took his goal tally for the season to 7 goals in total.
Login to Quote Manager's review
Andrew Booy named the same starting 11 for this match against top of the table Watford. After the game the City manager went on record to say 'that was one of the best performances I have witnessed as Bristol City manager'. City dominated proceedings at Vicarage Road restricting Watford to only two shots on goal in the entire 90 minutes. The game was won in the end thanks to goals from Choupo-Moting (assisted by the fantastic wing-back Olsson on the left) and a fantastic chip from the other wing-back Kieftenbeld on the right wing. It was definitely a day to savour for the two City wing-backs with both players getting a match rating of over 8.0 but Kieftenbeld beat his colleague to the MOTM award purely because of his calm lobbed finish over a helpless Watford keeper in the 76th minute. The Robins are now on an unbeaten run of 7 matches in the league.
Login to Quote Manager's review
Booy named the same starting 11 that had been doing so well recently but after only two minutes the scene had been set for the rest of the afternoon as after a bit of pinball in the 6 yard box Kieftenbeld comically put through his own net. Buitrago pulled City level after 10 minutes and from then it looked like City would go on to win the match but they couldn't find a way through a stubborn Stoke defence and Begovic in goal and Stoke scored two further goals to consign City and Booy to their first defeat in 8 matches.
Login to Quote Manager's review
After the loss to Stoke manager Andrew Booy had a chance to reflect over a international break and two players in particular came back tired from duties with their countries. Will Hughes played two matches for England U21's and needed a rest so Franco Zuculini was given a start in midfield and Maxim Choupo-Moting came back from lots of travelling with Cameroon so Matej Vydra was given only his 5th start this season. The changes proved inspired as Vydra and Zuculini were two of the best players on the park, with the Czech striker in particular getting a MOTM rating of 9.5 with two goals and one assist.
Login to Quote Manager's review
Booy made only one enforced change to the side that convincing beat Brighton previously as Strandberg replaced the suspended Wilson in defence. The Robins secured another big win with the front two of Buitrago and Vydra performing exceptional grabbing all 6 goals between them. Buitrago played with an almost perfect 9.9 rating and scored 4 goals in the rout (his match performance is highlighted below) 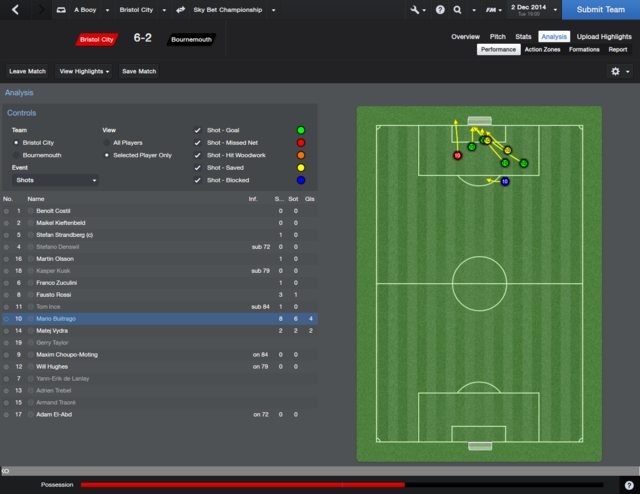 The game was is now the record high scoring game under Andrew Booy's tenure eclipsing the 5-2 victory over Coventry last season.
Login to Quote The Colombian striker had an exceptional November. He scored 6 goals in 4 games including 4 goals in one match against Bournemouth. He now has 13 goals in 19 starts this season and is the top scorer in the Sky Bet Championship. His performances also won him the Championship player of the month award for November.

Highly commended
Fausto Rossi - average rating 7.54
The advanced playmeaker was consistent again this month and was runner-up in the League One player of the month award to teammate Buitrago. His average rating for the season is 7.29 and is 2nd only to Middlesbrough's Marvin Emnes in Sky Bet Championship.
Matej Vydra - average rating 8.08 (only started 2 games)
The young Czech striker has only started the last two games of November but he must get a mention as he has scored 2 goals in both those matches with match ratings of 9.5 and 8.8 in those games. He has played 2nd fiddle to both Buitrago and Choupo-Moting earlier this season but is looking hard to drop considering his recent form.
Login to Quote