Quaesiveris
8 years
Hi. Great story so far, loving it! While it's still a while yet, it's going to be interesting to see how you deal with the potential losses of Lukaku and Deulofeu next season. Will definitely be reading =)
Login to Quote 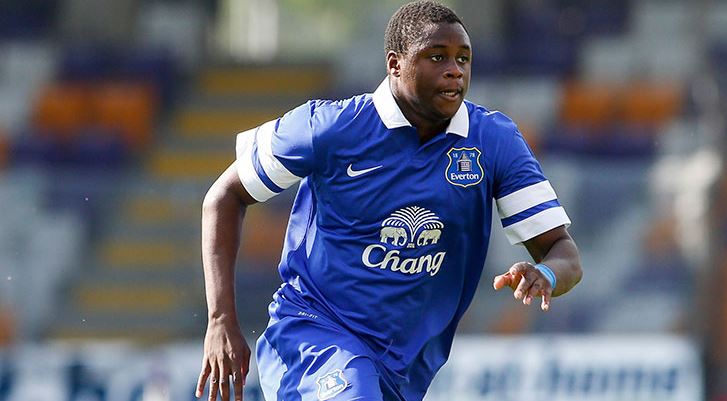 Everton have allowed ten players to leave the club on loan deals, following the transfer deadline on Monday night.

Martinez says that he rejected over fifteen loan bids for hot prospect Apostolos Vellios, as he is looking to bring him through into the first team this season.

"About fifteen clubs say they have interest in the player for a loan deal, but I want to get him into the squad for games at Everton this season.

"The other players who have left - they were not good enough to play at Everton just yet.

"Apostolos, with hard work, he can get there."
Login to Quote

Thanks man. Will be hard to replace...or maybe I'll manage to pull permanent deals?! Who knows! Thanks for reading and commenting.
Login to Quote


Three Barclays Premier League ties and a Capital One Cup showdown with Newcastle - September contains its ups and downs. 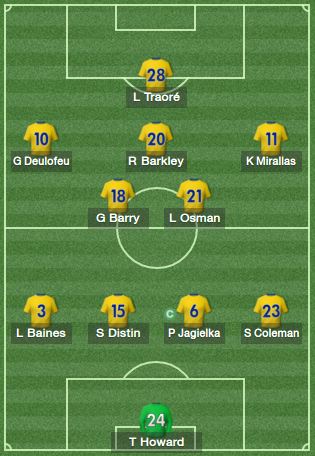 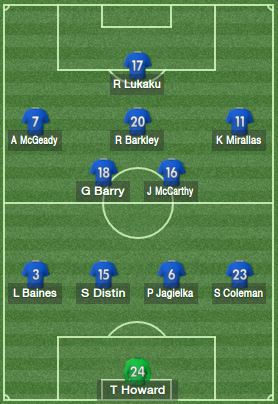 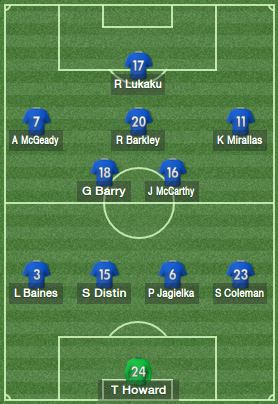 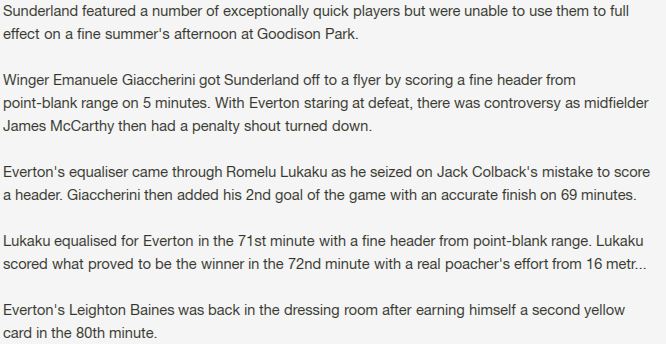 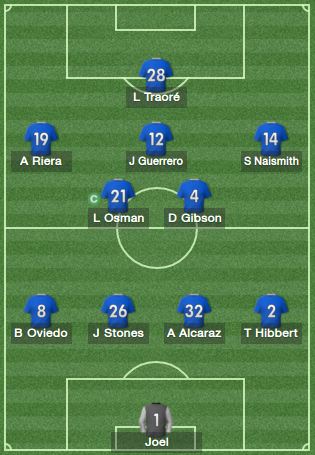 We were knocked out on penalties in the Capital One Cup. Fielding a weak side to give others a go, eventually losing out. Shame, but at least we can now solely concentrate on the Premier League and recovering form.


A shocking month and one to forget for Roberto Martinez and Evertonians. Only one win in September and a cup exit. However, the seemingly big 3 games are now out of the way for Everton and they will be hoping to kick on and get their dodgy start to the season back on track. 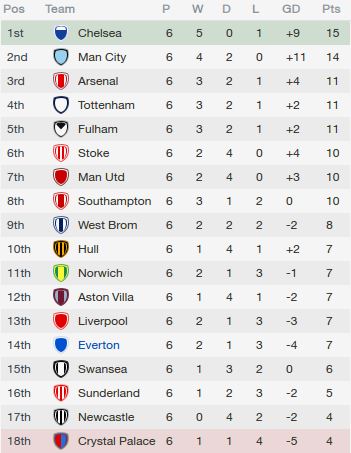 Luckily our dreadful September hasn't been too damaging. A place in the top four is only 4pts away. On loan from Chelsea, Romelu Lukaku has been a key performer for Everton in a terrible month for the club. His hat-trick against Sunderland sealed three crucial points in what was a must win game for Roberto Martinez and Everton.

Lukaku's September Highlight: Scoring the equaliser and winner in the space of two minutes to seal a dramatic 3-2 win for Everton over Sunderland at Goodison Park. 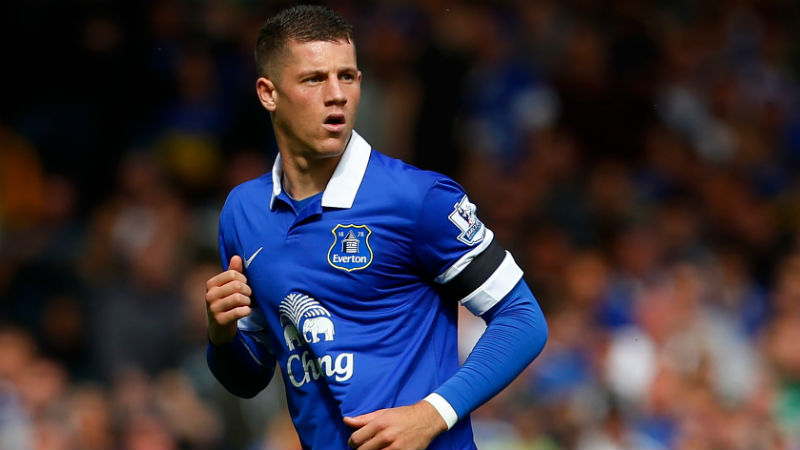 Barkley revealed that he is delighted to be committing his future to Everton due to long-held passion for the club.
Login to Quote

Baines has faith in Martinez 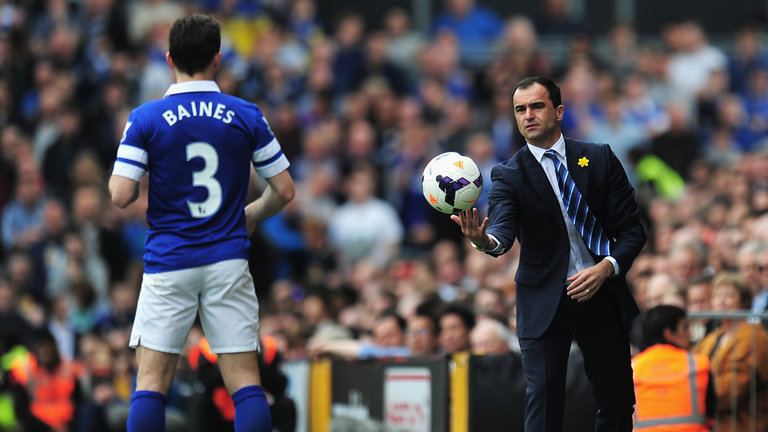 Everton fan favourite Leighton Baines has backed Roberto Martinez to succeed as Everton manager, despite the Spanish tactician coming in for heavy criticism from supporters and media outlets after their below-par start to the season.

Martinez has guided Everton to only two wins from a possible six in the Barclays Premier League, and has also seen his side knocked out of the Capital One Cup.

But Baines says that Martinez is simply overseeing a transition period since the departure of David Moyes and that the club should not make a knee-jerk decision in firing the FA Cup winning boss.

"The gaffer is the face, the brains behind the mission so to speak, that's why he's the one being lambasted for our poor run of form.

"People forget after a defeat like West Ham that he was the man in charge when we beat Swansea and Sunderland and took points off Man City.

"The players have to take a large share of responsibility in this.

"Robbie is doing everything right, it's not just not quite pieced together yet.

"We have to focus on the next few games and we all know that any news about the managers' future is purely media fabrication.

"He has deservedly got the backing of the players, all of us, and I think that flows into the boardroom at the club too."

Everton face West Bromwich, Norwich, Hull and Cardiff in their next four league matches, with some sources reporting Martinez could lose his job if they suffer defeat in any of them.
Login to Quote

Everton's Mirallas out for eight months 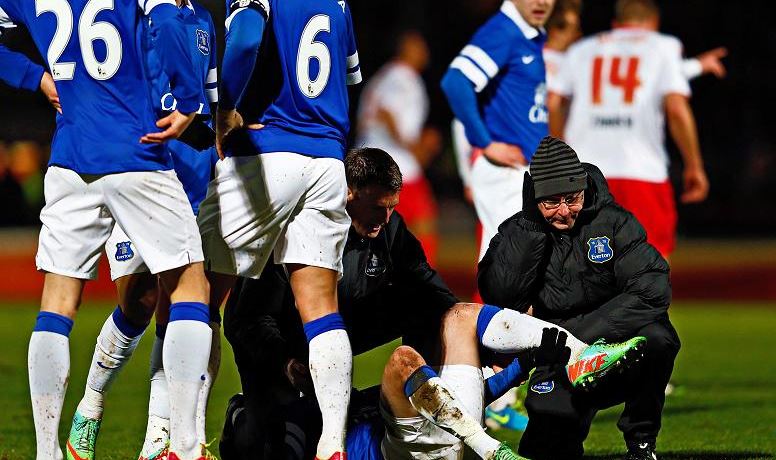 Everton star Kevin Mirallas has been ruled out of action for up to eight months after suffering a horrific broken tibia (leg), coming off worse in a sickening 50/50 tackle with Youssuf Mulumbu during an October match.

The two players both challenged for a loose ball, but Mirallas' shin folded underneath the weight of Mulumbu as the pair went to ground.

All 22 players on the pitch and medical staff attending to the player were visibly distressed, some close to the player in tears.

Mirallas was treated for 18 minutes on the pitch with gas and air and a morphene injection was administered on the pitch.

The West Brom midfielder will not face punishment after cleanly winning the ball.

There will be no further comment from club or player at this time.
Login to Quote 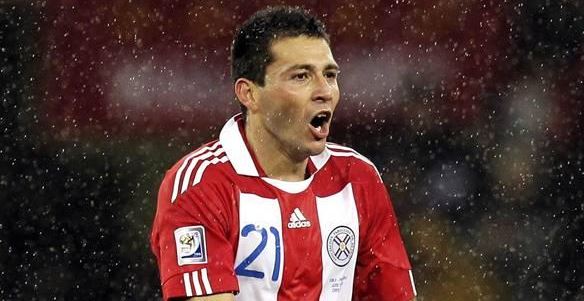 Everton defender Antolin Alcaraz has been ruled out for up to seven months after rupturing knee ligaments whilst on international duty with Paraguay.

The news comes only days after Toffees team-mate Kevin Mirallas was ruled out for eight months after suffering a harrowing broken leg injury.

Everton manager Roberto Martinez said: "Antolin will be out for a long time, like Kevin.

"It is cruel, not only the players but the club as we will suffer through their absence.

"Both are very good players, but both very strong mentally and I'm positive they will both bounce back and might be with us before the end of the season."
Login to Quote 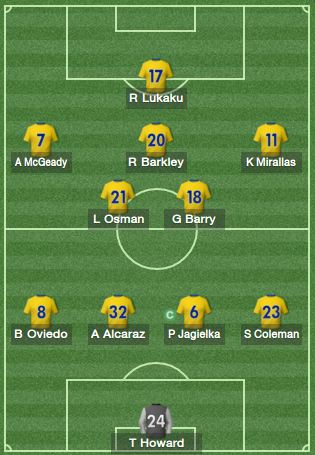 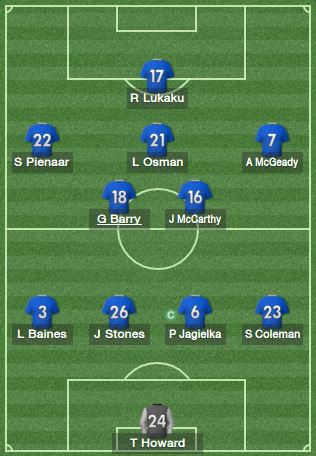 
A big improvement on September and it was good to gain some confidence through victories against weaker opposition. The draw at home to Norwich was a disappointment but other than that a fine month. Unfortunately off the field we have suffered greatly though. Kevin Mirallas (broken tibia) and Antolin Alcaraz (ruptured ACL) face lengthy spells on the sidelines, and the Mirallas loss will certainly have an impact later in the season. Climbing the table (at last). Still 4pts from 4th but winnable matches ahead as the players grow in confidence and adapt to the way I (Roberto Martinez) have set them up tactically. On loan from Manchester City, Gareth Barry enjoyed an in-form October playing with freedom and his wonderful passing range has ensured Martinez's possession based football works a treat, he could be called the lynch-pin of the system.

Barry's October Highlight:His majestic performance at The Hawthorns, assisting in some form for both goals, was the highlight of Gareth Barry's season so far. Everton have confirmed police were called to their training ground on Friday following a row between manager Roberto Martinez and an Everton player believed to be Arouna Kone.

The pair clashed as the Toffees prepared for a November fixture with Stoke.

Reports have claimed Kone was seen brandishing a steel pole that he initally threatened his manager with, before smashing three windows of Martinez's car.

"It's understood a member of the public phoned the police, who felt no action was required after Roberto (Martinez) played down the issue.

"The club can confirm that our manager's car was damaged by an Everton footballer and an internal investigation has opened.

"The matter will be dealt with and the player in question will be asked to issue a formal statement and apology to Roberto Martinez.

"Disrespect for anyone involved with Everton Football Club will not be tolerated and Roberto has been dignified in his dealings with this problem."

A statement from Merseyside Police said: "Police were called to the training ground at around 1.30pm on Friday.

"Club officials were spoken to and no police action was required following a man pressing no charges."

Kone has not featured regularly under Roberto Martinez, who signed him from former club Wigan Athletic in the summer.
Login to Quote England and Everton left-back Leighton Baines has been ruled out of action for six weeks after straining back muscles during a weights session in the gym.

Baines joins long-term absentees Kevin Mirallas and Antolin Alcaraz on the injury list, as problems for Roberto Martinez and his first team squad continue to grow.
Login to Quote

Disgraced Kone gets life ban from Everton and will leave

Disgraced Everton forward Arouna Kone has been handed a life-ban from all things Everton, and will be sold in the January transfer window.

Until then, he will not be allowed in to the training ground or stadium or any functions associated with the club.

This ban comes after Kone was found guilty of trying to attack manager Roberto Martinez during a training session, before smashing the Everton boss' car with a steel pole that he'd threatened staff with.

It is believed that Kone had requested he get more starts in the Everton first-team, a request that was refuted by his 40 year old coach. 
It's been an OK month. Average I suppose. After the Stoke City defeat, which I was appalled by, I tinkered with our style of play and worked on it in training - changing to a deep kind of 4-4-2 formation, and it worked. Taking draws from Old Trafford and a stern Tottenham side was very pleasing. Hopefully it continues to be effective. I'd have liked victory against Tottenham but after falling behind it was pleasing for Lukaku to score very late on. 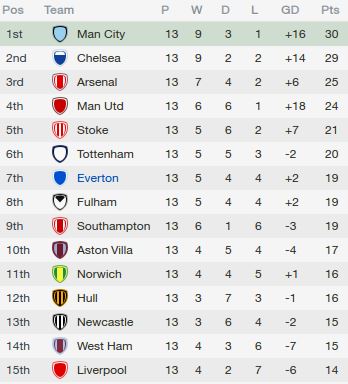 It's alright I suppose. Not groundbreaking but not abysmal. Sitting in 7th, 5pts from Manchester United in our target of 4th - I've seen worse starts to the season...just look at Liverpool. 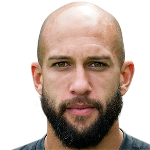 Our long-serving goalkeeper Tim Howard has kept us in the mix this month, two great performances against Cardiff and Manchester United, the USA stopper has been in form all season and we can thank him for saving us (literally) on many occasion.

Howard's October Highlight:His tremendous performance at Old Trafford, the former Man Utd goalkeeper kept out what looked like 4 certain goals - that game could have been a lot different had it not been for Tim's heroics.

The 510 Series
8 years
Why are Stoke so overpowered?

InvertedWingbacks
8 years
Wow, I really love this style mate! and a mixed month, but those injuries are tough D:
Login to Quote