InvertedWingbacks
7 years
Spurs and Odense will both continue post-exam stress; i've always wanted to attempt an unemployment challenge, and this will come with greater detail, more stats, and be more personal, as I play as myself! 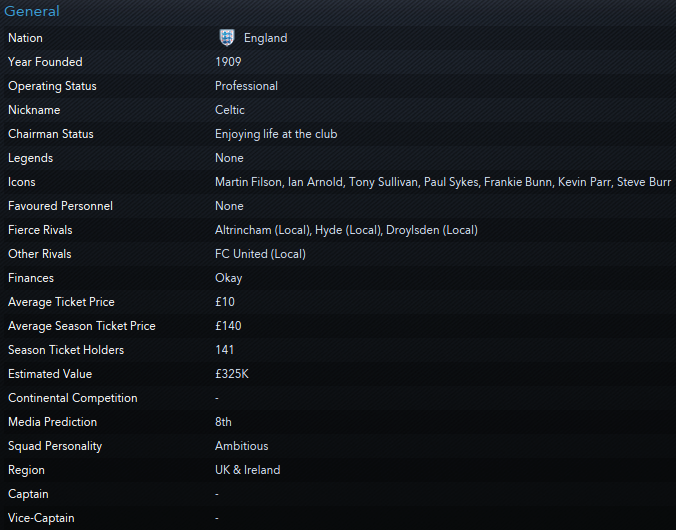 Jamesg237
7 years
Please try and stick with a story.....
Login to Quote

InvertedWingbacks
7 years
I'm trying; my other two have been pretty intense and i've got exams going on, and in my others, i've either been sacked or the saves corrupted

this and my other two i'll stick with, as stated in the top of the post
Login to Quote

fmhunter
7 years
All the best with this...it is only now that I've realised you're female - despite calling you 'pal' and 'mate' on several occasions. You're the next Helena Costa (hopefully)! Good luck


Stalybridge Celtic; A team playing in the Skrill North, founded in 1909. My new workplace. There's only two trophies in the trophy cabinet, both from the English Northern League Premier Division, from 1992 and 2001. The club's highest finish in the Skrill North was a 3rd placed finish in 2008, and our highest ever league position was 12th in the Skrill Premier.

Overall, the facilities are pretty basic, but the 6k capacity of the stadium is a plus, as if we can start to fill that we can bring in some decent cash. The team itself is in decent enough shape, but a few good signings are needed in places.

The board asked me to give them a mid-table finish, consolidating the work from last season, which is good; not too much pressure, and plenty room to manoeuvre in the league. I'll assess the guys over the next few weeks and come up with a formation we can play, and see who's staying and who's going.
Login to Quote

July 30th: The Squad and Formation


After 3 days in training, i've finally come to a conclusion around the squad and the direction we're going to go in...it's going to involve some tough transfers out, and a lot of work, but the boys seem up for it.

Firstly, there are some great talents in this squad, and i'll outline them below.

Sean is predominantly an Attacking Midfielder, and although the formation i'd look to use doesnt use AMCs, i'm keeping a hold of him, and i'll look to play him as a striker. With some intensive training, I think he could do a good job up front, especially as we're struggling for Strikers just now.

At the moment, Joel maybe doesn't have the stats to play the complete attacking role i'd be looking for him to play, but defensively he is solid, and he's going to be a key part of our defence for this season, and seasons to come.

Club captain at the tender age of 19, Dan Hart has a massive future ahead of him, and with plenty game-time and intense training, he'll hopefully become a central figure at the club, and my assistant manager reckons he could develop into a championship-level player, so we may face a fight to keep him.


So with these players, and some clever signings, I think we could do a good job in the league this season, but a Key point this season will be the tactics. 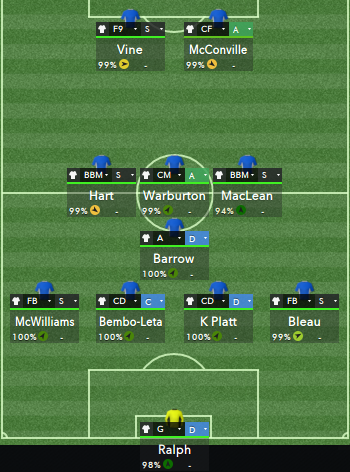 Essentially, we're looking to stay tight at the back, and frustrate opponents in midfield, while the false nine will seek to break out of midfield, and bring the Box-to-box midfielders into play to create chances
Login to Quote

fmhunter
7 years
Nice, nice, nice, nice! Stalybridge not all that far from my hometown...well, about 45 minutes. So I'm rooting for ya!
Login to Quote

InvertedWingbacks
7 years
thanks guys! I'm really excited about this; some great-looking prospects in here!
Login to Quote


Opening day of the season. The buzz around the stadium was tangible; players and staff excited to get started, and the measly 317 people in the 6k capacity stadium made plenty noise, in spite of their small number.

Hednesford were our opponents; newly promoted into the leagues, and hotly tipped to drop straight back down, but we weren't complacent. We knew our gameplan, and we stuck to it. Tight at the back, careful going forward, not pushing too far too fast.

We were ahead after 19 minutes, Kristian Platt scoring a header from a Dan Hart corner which flew into the net past the diving goalkeeper, and sending our fans wild; the first goal scored in this season's Skrill North was ours!

For the rest of the game, we concentrated on containing opposition attacks, passing the ball and keeping possession, and probing their defence to find and exploit gaps where the opportunity presented itself. We created plenty chances, but struggled to hit the back of the net with them. Overall though, we played well, and a 1-0 victory is as good a platform as any to build a season on.
Login to Quote


The opening game of the season always provides some dodgy nerves, and players can make some big mistakes, but we survived pretty well. A 1-0 win was well-deserved, and we worked hard for it, covering almost every blade of grass in a bid to close down opposition attacks.

However, nobody ran more than Stephen Tames, one of our strikers. he dropped deep and stayed there to support his team mates, covering 10.5km of ground over the match. His average position wasn't as high up the park as many would imagine a striker to be, but it worked well, and we frustrated the opposition. 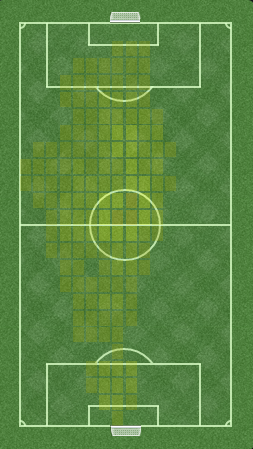 Passing was one of the key things which I had told the guys to focus on; the more of the ball we see, the less our opponents see, and they duly delivered. Kevin Bleau was key in this, making 69 completed passes all up the right wing, including a couple of key passes which led to CCCs. 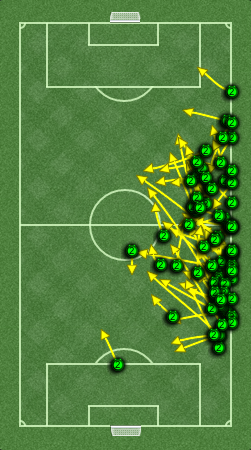 Martin MacLean, our loan signing from Brora was also Key in this match, his passing and tackling both excellent, and his movement also critical to the team. With 60 completed Passes, 3 key passes to break up attacks on our right wing, and 9.6km covered in the match, MacLean definitely gets my vote for Man of the Match, despite the league's stattos not agreeing.
Login to Quote


Thoughts: Overall, this month has been incredibly pleasing. We played 5 matches, winning 4 and drawing one, to finish the month top of the league, and unbeaten! 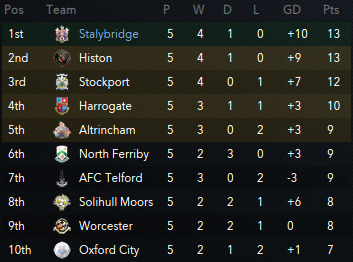 
So...My first competitive month at the club is over, and it's been a blast. Being top of the league, unbeaten in 5 games, and named Manager of the Month for the first time. The atmosphere in the dressing room and around the club in general has been incredible, with the fans, players and board giving me their full backing.

This window, we've made 4 signings, 2 on free transfers, one player for a fee of £3.6k, and one player on loan; the 4 of them are detailed below.

Released by Portsmouth in 2012, Vine hasn't made a first-team appearance at any point in his career, but he has solid stats and looks to be a great creator in the making. So far for us this season, he has featured in 4 matches, making two assists, and netting himself an average rating of 7.55; certainly looking like a solid piece of business.

Starting his career at Plymouth, Dan joined us having been released by his club in 2012, and after a chat with my assistant manager, he was appointed club captain at the tender age of 19; certainly looking like a great future prospect, who could last us well into the Championship level if we make it that far. Since arriving, Dan has made 5 appearance, scoring once, and making 3 assists, with an average rating of 7.42

Another great-looking youngster, Steven joined us from Southport, where he scored 3 in 27 appearances last season, and the £3.6k we paid is looking like a true bargain. 3 goals and an assists in 4 games mean that Steven is swiftly becoming a fan favourite at the club.

Brought in on loan for a season, with a future fee clause of £8k...not sure if he's going to be worth that kind of money come the end of the season, but in his 3 appearances so far, he's made an assist and netted an average rating of 7.47; the 23 year old Scot is looking invaluable for our campaign this season.


This month, we continued our unbeaten form, still sitting pretty at the top of the league, and after 9 matches of the 42 we're going to play, we've won 8 and drawn 1, with a goal difference of +16...the boys are really playing out of their skins, and long may it continue. In this update, we'll discuss the matches, the players and then the league table.

5 Wins in 5 games mean we hold onto top spot in the league, as well as progressing into the 3rd qualifying round of the FA Cup; not far from games against Premiership teams. In terms of the squad, I had to do a fair bit of rotation, and every player stepped up to the task. Cinehdu Vine has particularly impressed me, stepping his game up this month to stake a real claim for first team football. 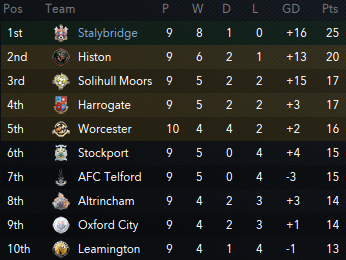 Sitting 5 Points clear, our season is shaping up to be a good one, after only having been 16-1 shots for promotion at the start of the season. I'm delighted with how the season has gone so far; and indeed the fact that the players' feet are remaining firmly on the ground, and nobody is getting carried away with our chances...but it is still early in the season.
Login to Quote

You are reading "Unemployment Challenge: A Woman's Touch".