hey guys you join me in my second season in charge of Guangzhou Evergrande, ill give you a brief rundown to the end of my first campaign to let you get the idea of whats happenging, we will then start fresh from the second season 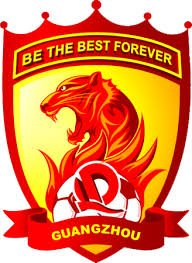 Originally founded in 1954, their biggest achievements were winning several second-tier division titles before they became professional in 1993 and achieved an upswing in results, leading to a runners-up spot in China's top division. Unable to improve upon these results the club would go through a period of stagnation and then decline before they experienced a brief revival when they won the 2007 second division, however in 2009 the club were embroiled in a match-fixing scandal. This saw them punished with relegation, however the Evergrande Real Estate Group decided to purchase the club and pumped significant funds into the team, which saw them immediately win promotion as well as gain their first ever top-tier title in the following campaign in the 2011 Chinese Super League season. The club won its first AFC Champions League title in 2013, becoming the first Chinese football club to win the continental title in its current format. The club subsequently finished fourth place in the 2013 FIFA Club World Cup.


the conclusion of my first campaign in charge was pretty dramatic and was definitely nail-biting.


with two matches remaining in the league we trailed by one point and needed maximum points to put the pressure on Shandong Luneng, the following two weeks would become quite entralling


we came into this match with Wuhan hoping for a positive result to pout the pressure on the leaders, Shandong actually went on to lose there last two games which meant we needed a win and a draw, we finished the season scoring 13 goals in two games which led us to the Chinese super league 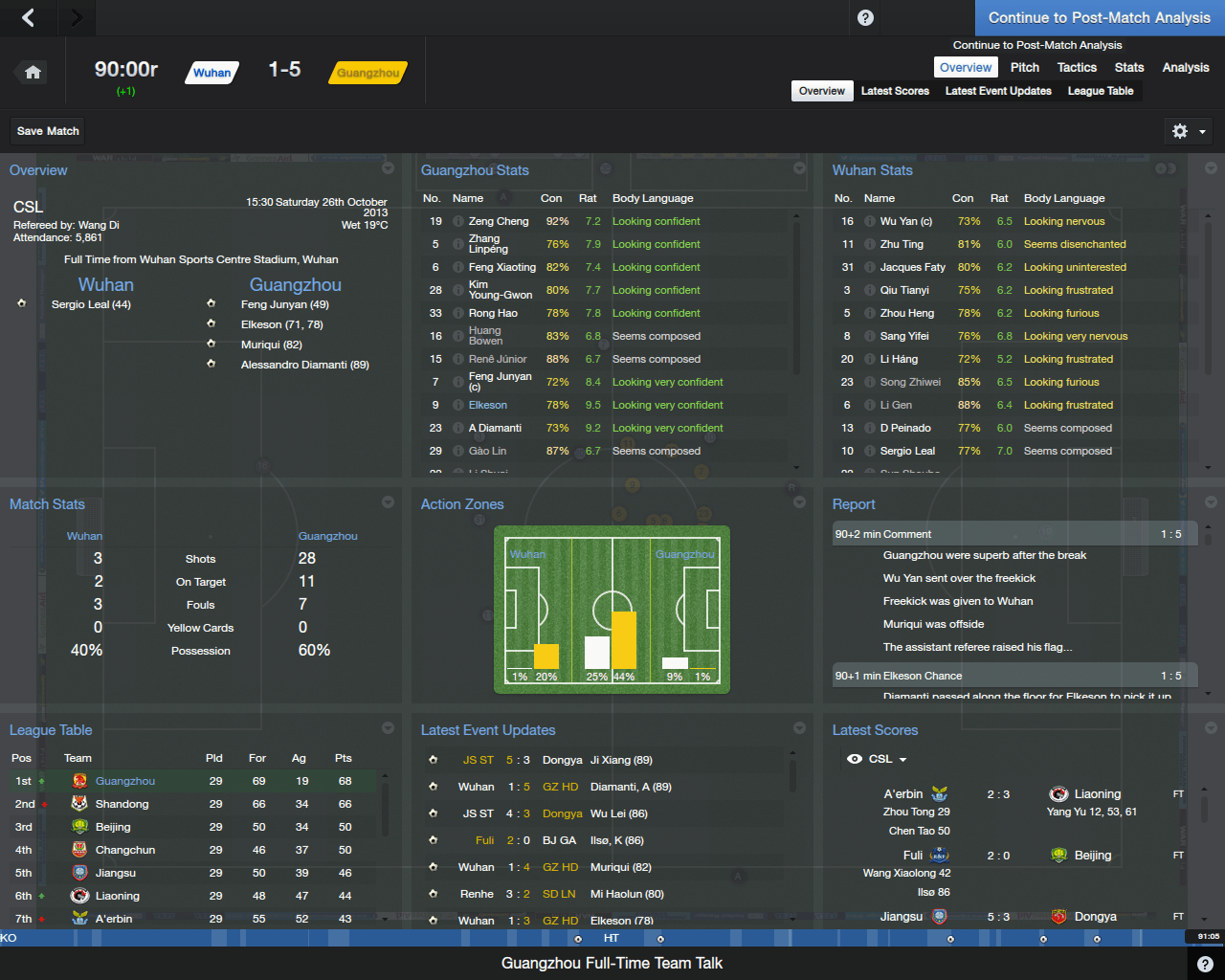 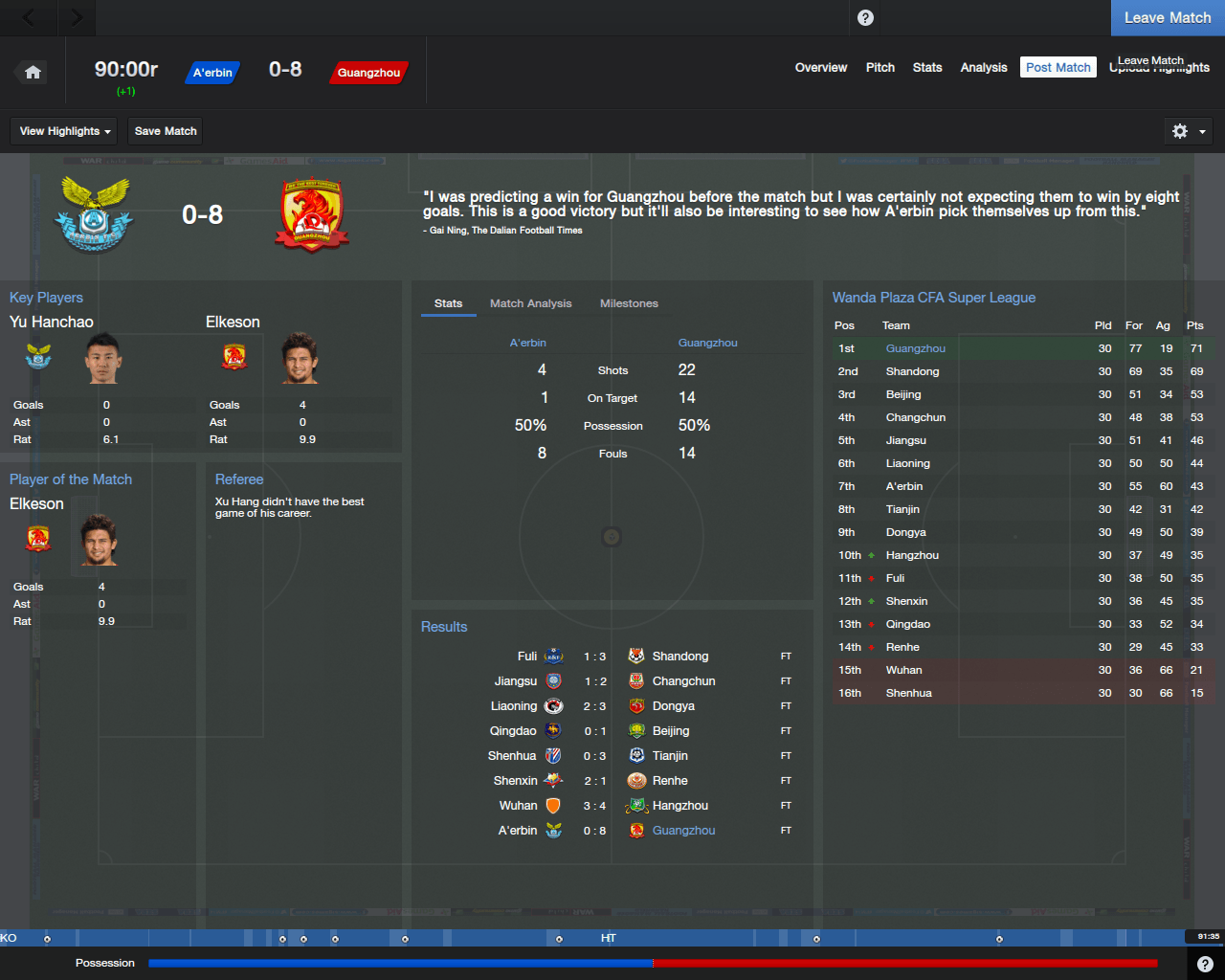 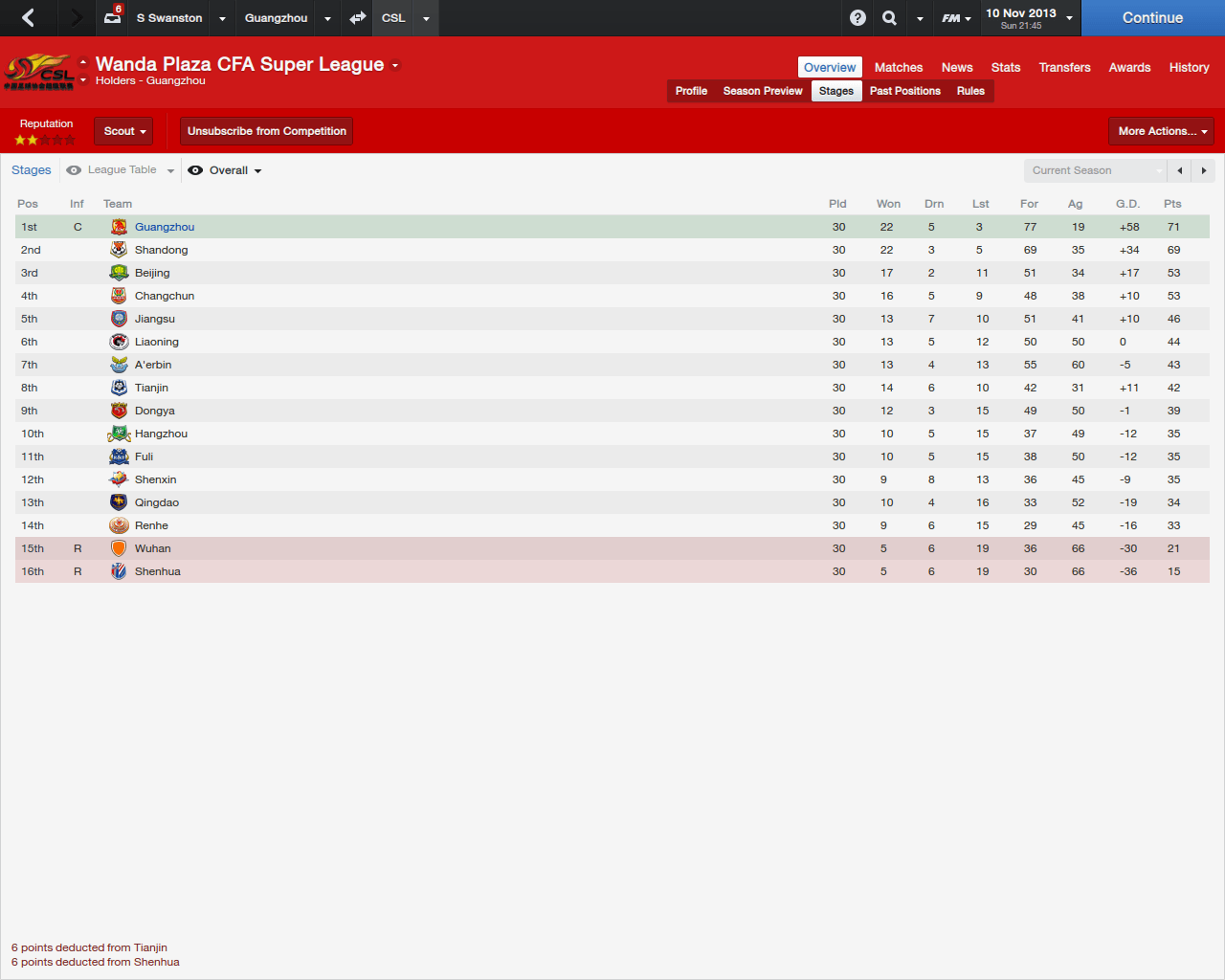 theres my rundown for the first season, the nest posts will be upto date and posted regularly, thanks for reading
Login to Quote

fmhunter
8 years
Very interesting club to be managing and congratulations on a fabulous season. Will follow

we started pre-season with a bang against lowly Hengpeng, smashing them 6-1 and though its only a friendly im was very happy with the way we kept the ball and moved it around at pace, ive also organised friendlies against top South Korean sides which will put us in good stead for the upcoming season 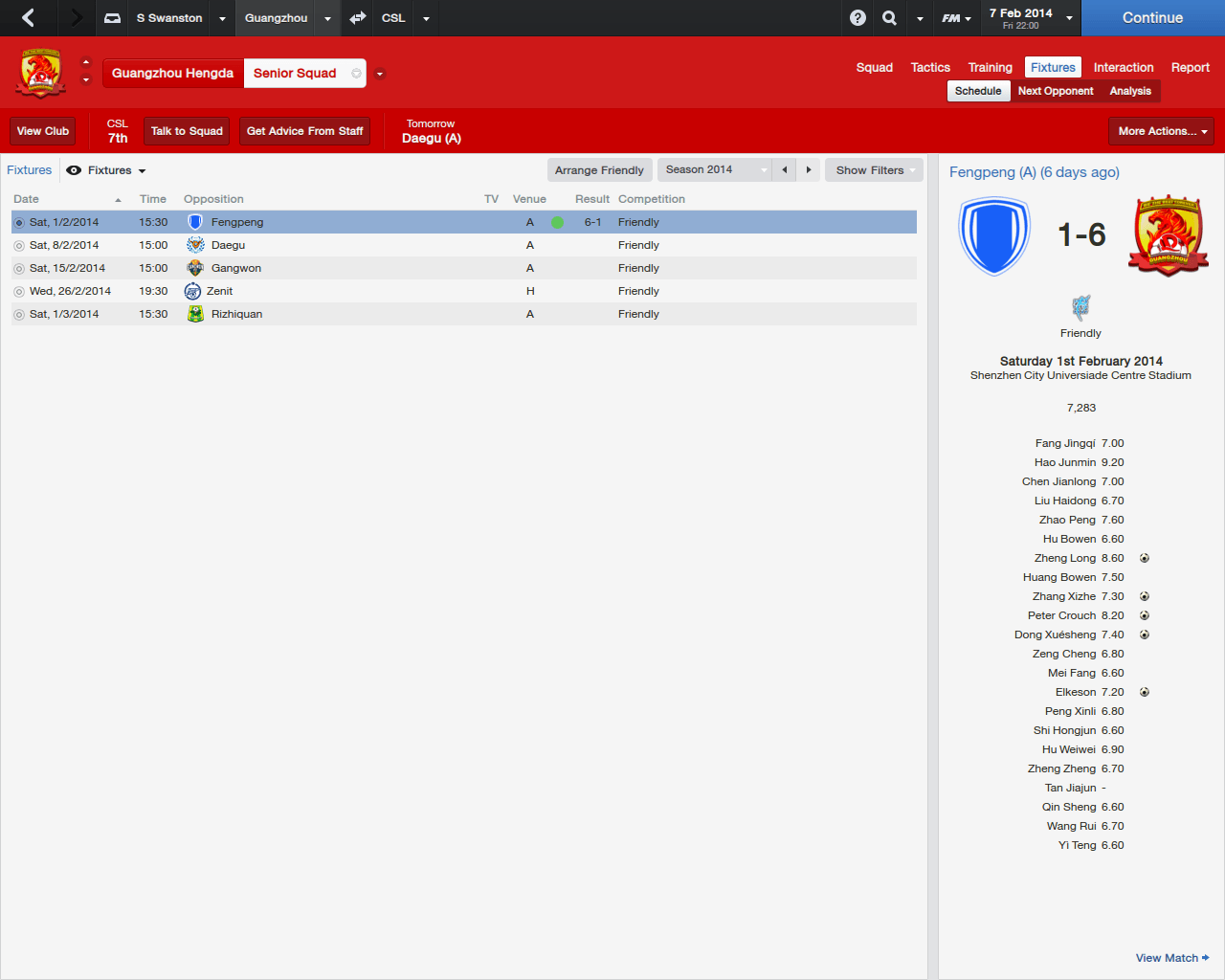 the joys of winning the National championship is that bigger players start to take more notice of Guangzhou, I made the very most of our growth in stature and confirmed the signings of Peter Crouch and Mile Jedinak, both players were under performing for Stoke and Crystal Palace respectively. ill be looking for both players to perform well this season and push us toward another title and hopefully AFC glory 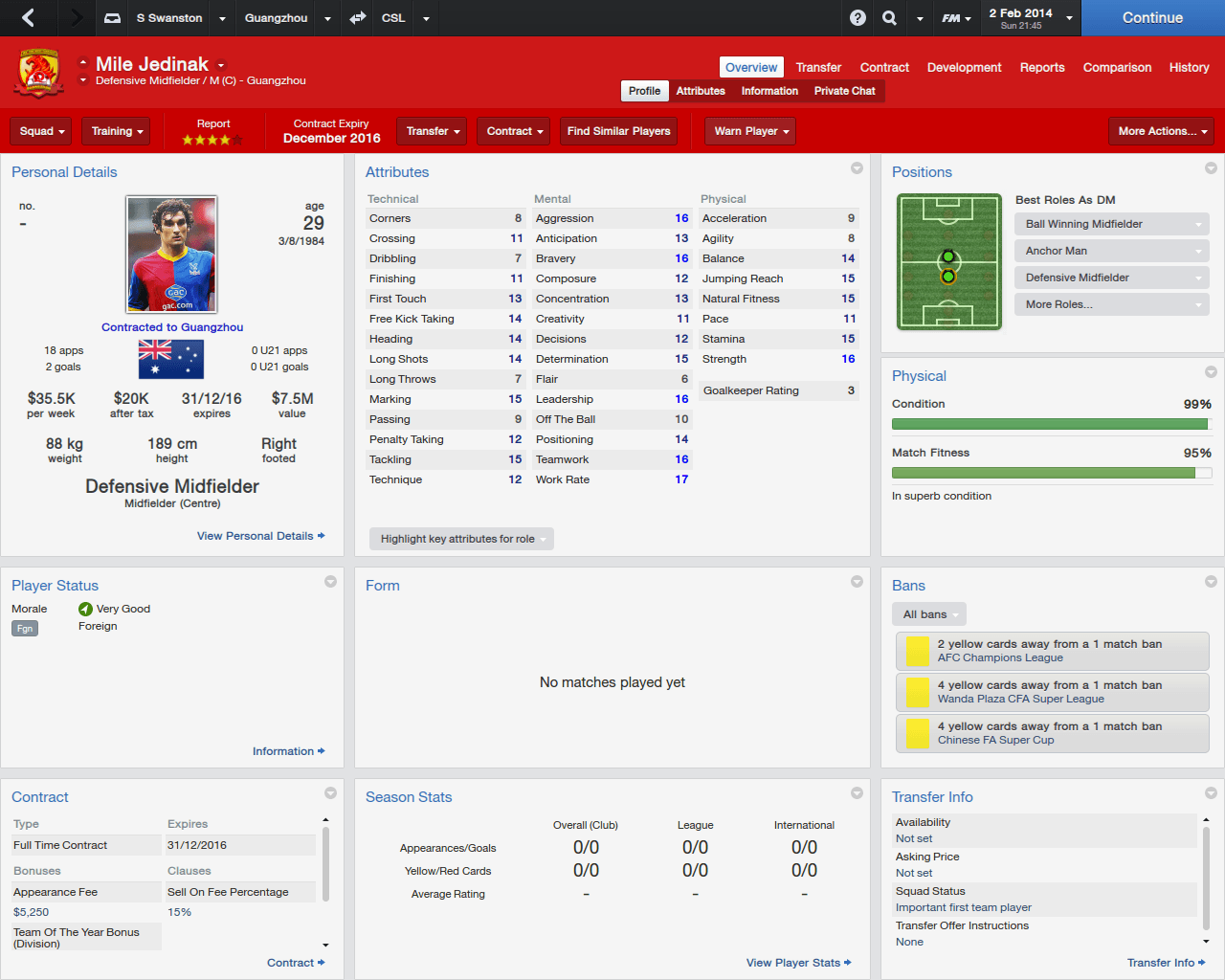 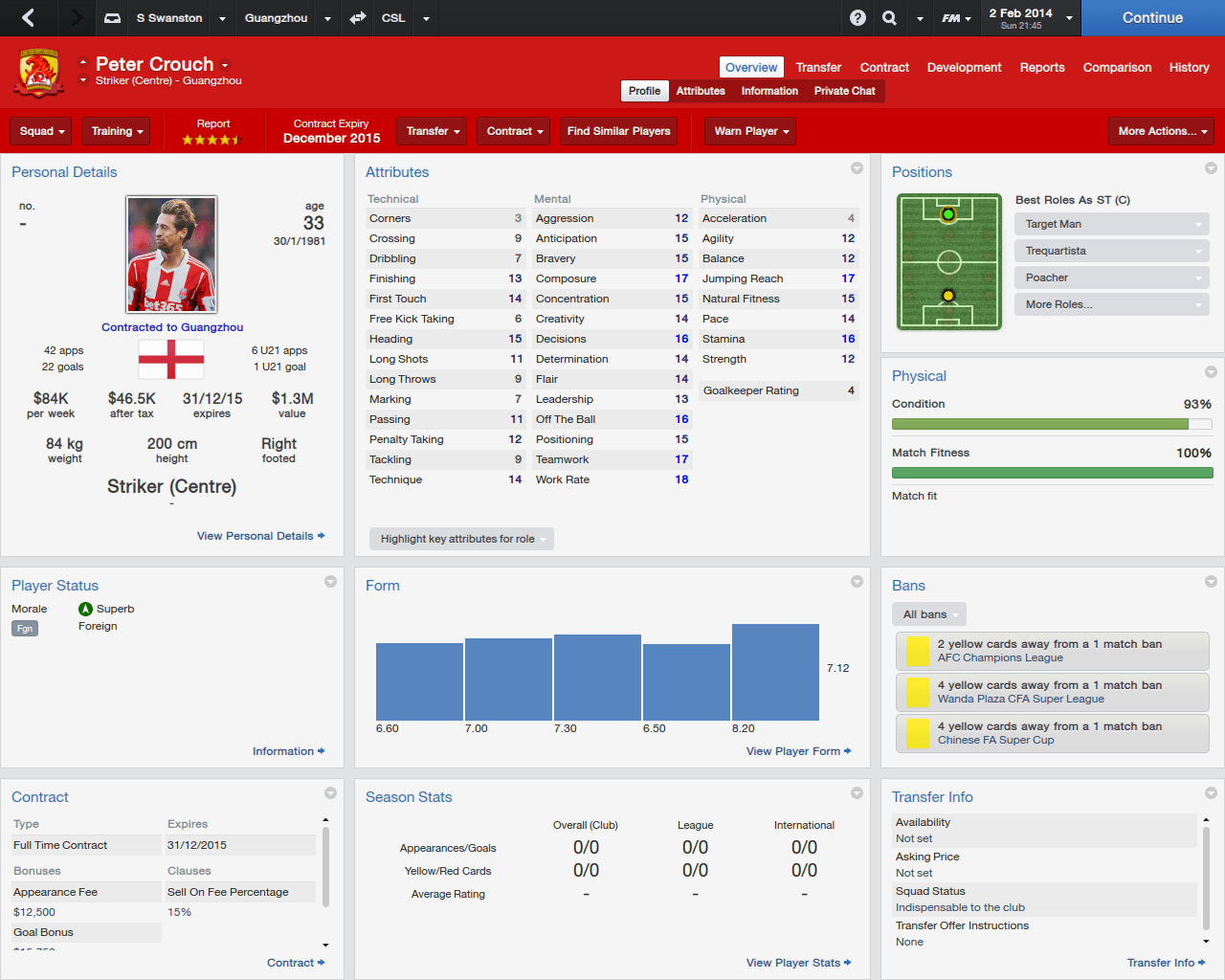 swanny8589
8 years
Guangzhou Evergrande has announced that club captain Zheng Zhi has extended his contract by an extra two years, Zheng was an integral part of Evergrande's march towards the title. despite being well into his 30's a number of rivals including Renhe, Shandong Luneng and Tianjin were all interested in signing the midfielder.
so this is a massive boost for the club 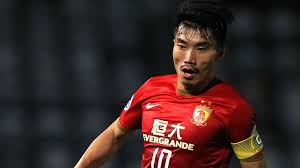 must say im fairly pleased with what weve been dealt with in this group, though it will be tough im more than confident my boys can progress thorough to the knockout round. the key will be getting maximum points off Nagoya Grampus 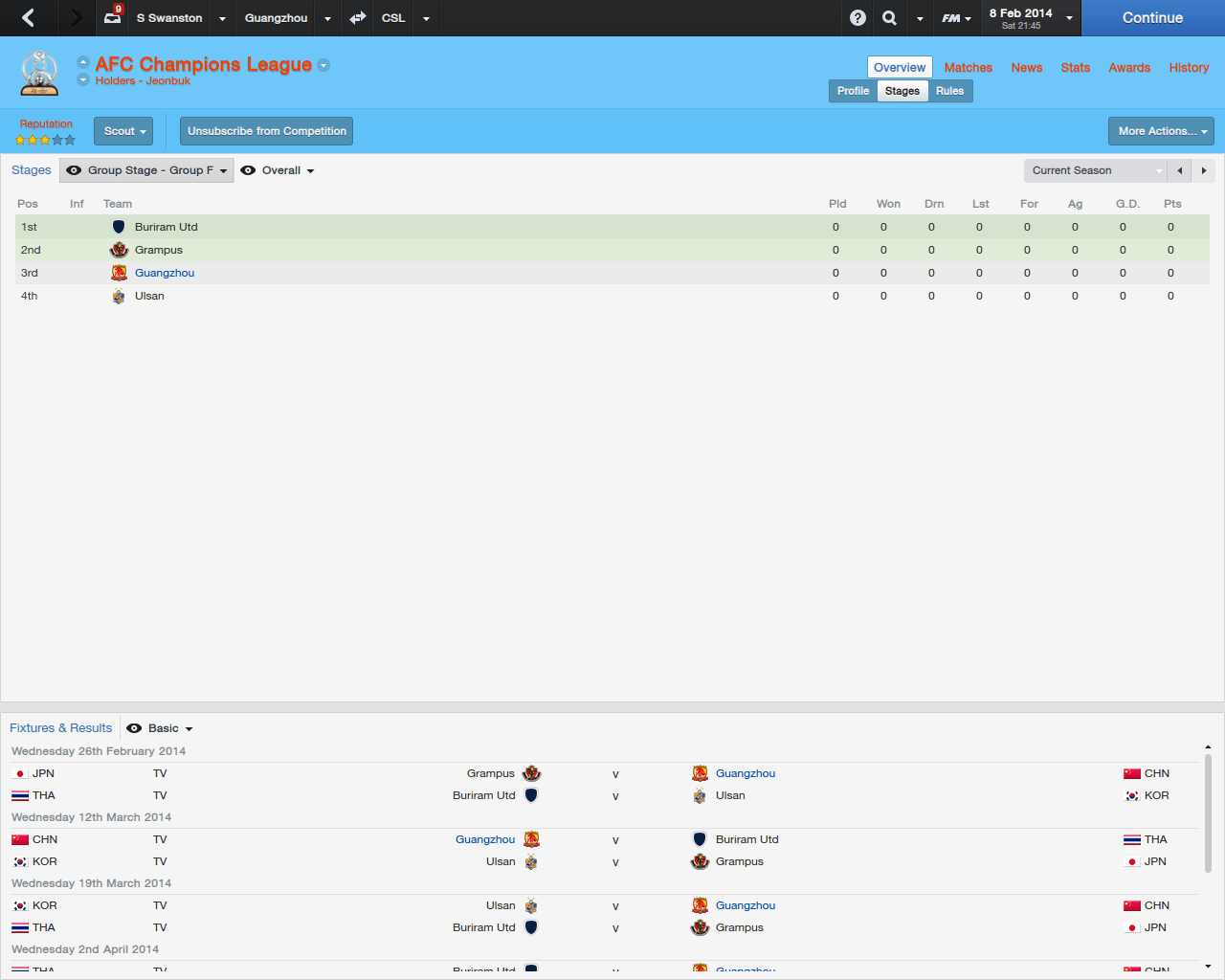 
the official curtain raiser to the Chinese national league pitted us against Renhe who won the Chinese cup last year, we were expecting a tough match against Renhe as they are usually fairly tough to beat
so i was definitely suprised when we ran out 4-0 winners 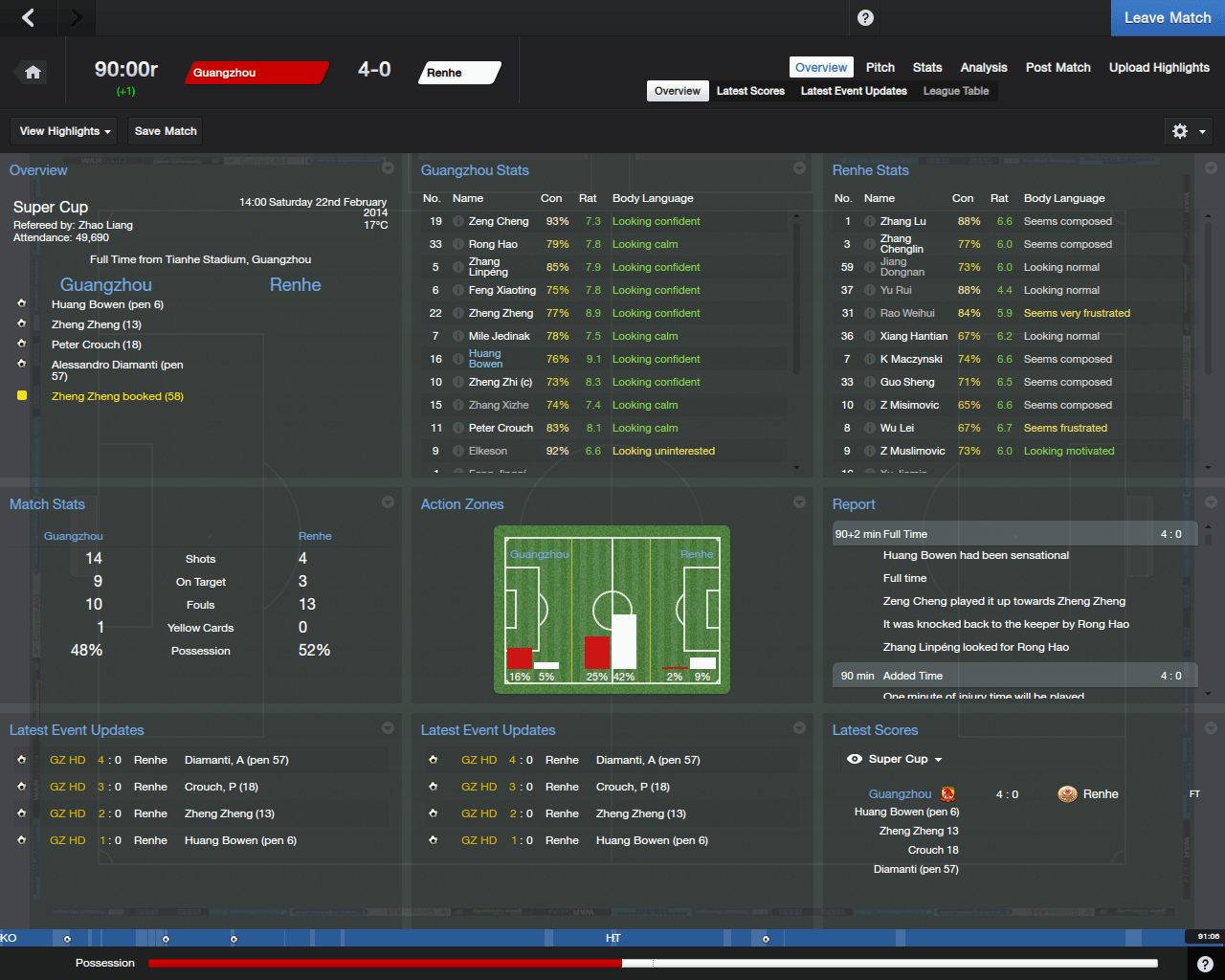 
so the AFC kicked off in very tough fasiion up against a very good Nagoya Grampus team on top form, we were comprehensively outplayed but still managed to only lose by a single goal, the match ending 3-2 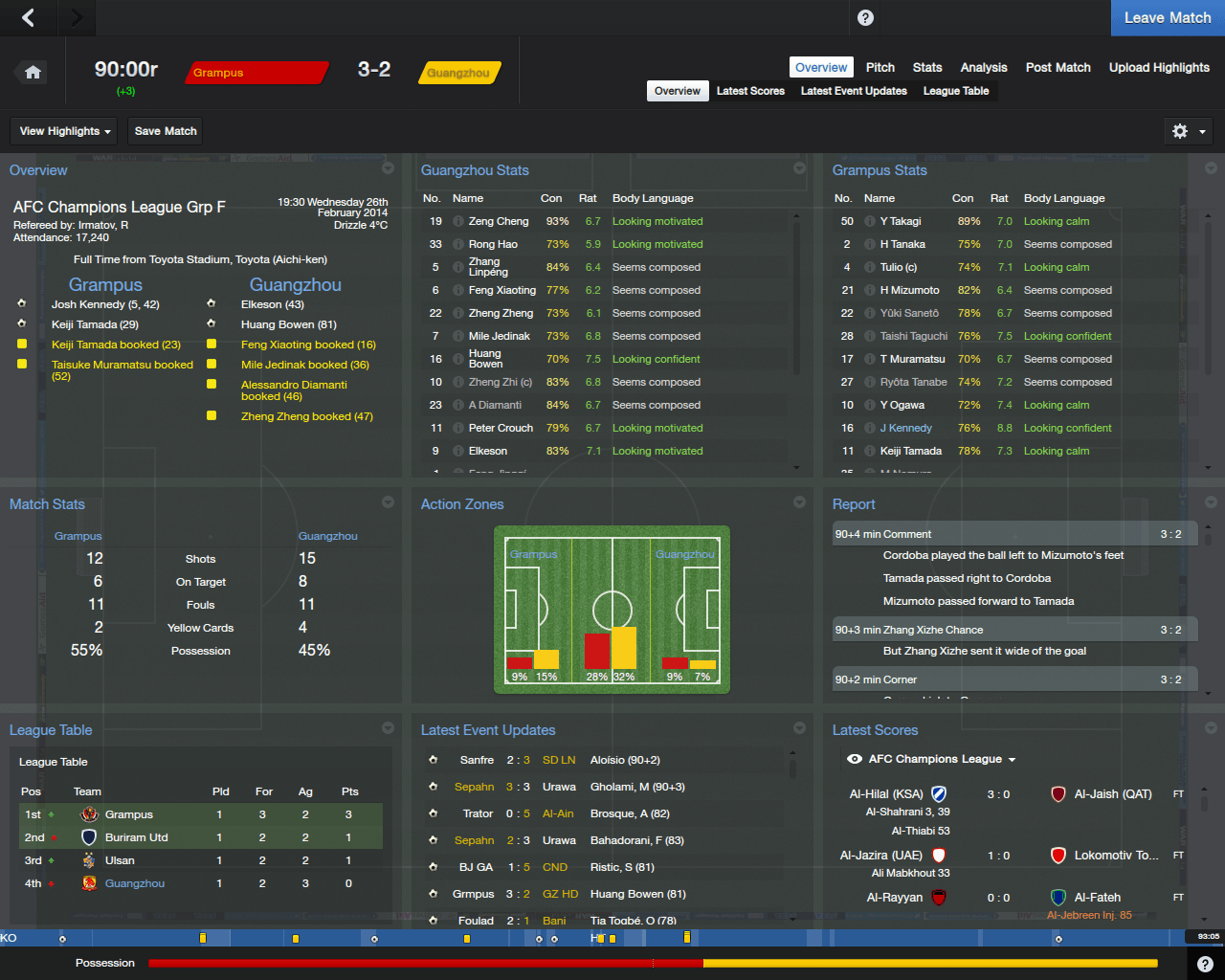 Slid3Tackle
8 years
Diamanti!! He's one of my favourite players! I wish you good luck with your story mate!
Login to Quote


we headed into our second AFC mact in search of a win, we werent at desperation stakes but it was important to get our first 3 points of the group stage 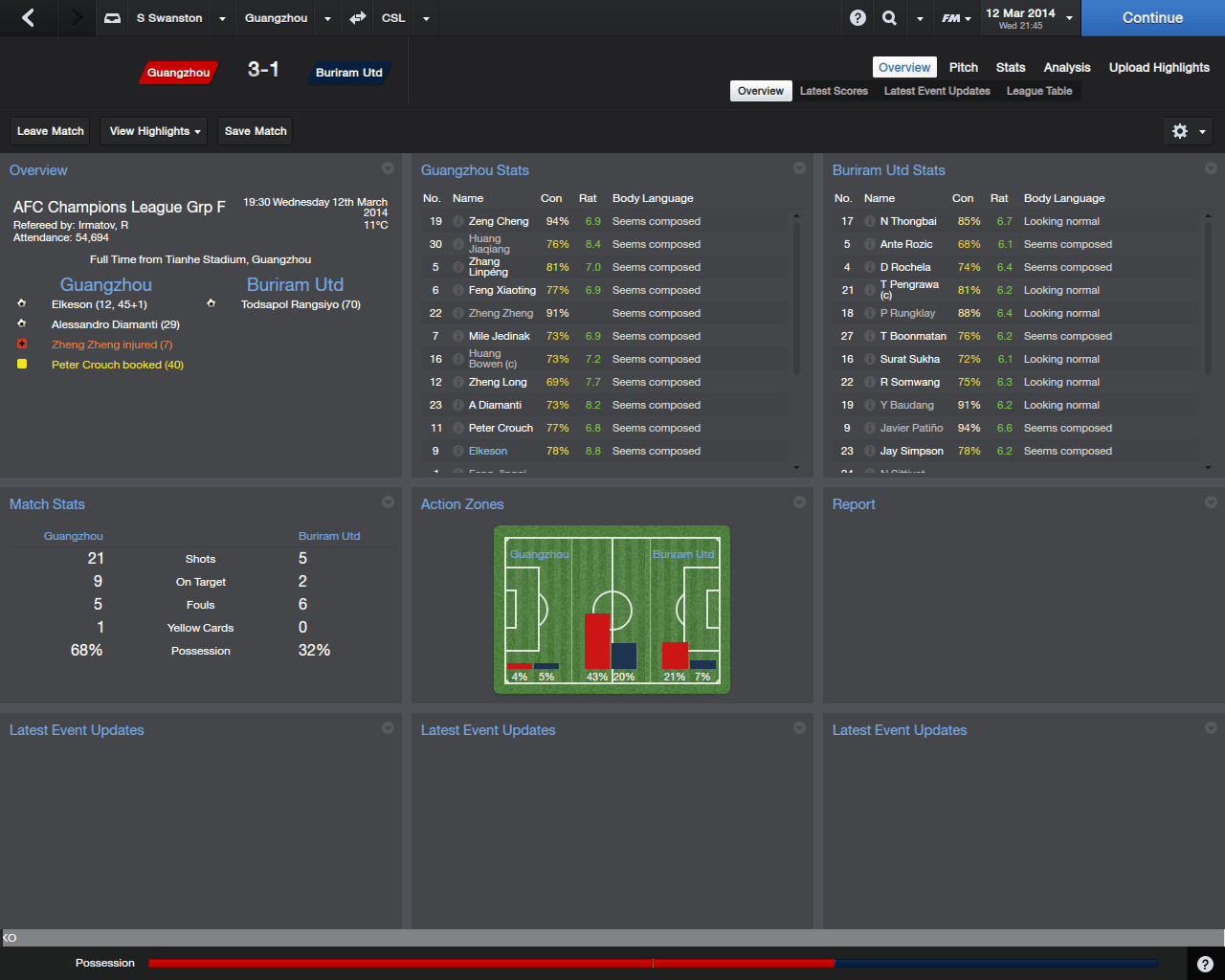 Griffo
8 years
How is Elkeson performing for you this season?
Login to Quote

Elkeson currently has 3 in 3. Ill be hoping him and Crouchy start to gel soon
Login to Quote

swanny8589
8 years
only two days before our AFC Champions League match against Ulsan Hyundai two of our key players had extended there contracts by a further 3 years each, keeping Huang Bowen and Elkeson is a signal of intent showing we will not be getting rid of quality players when big clubs come knocking. 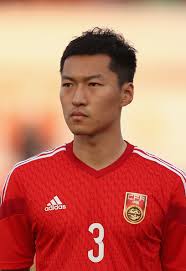 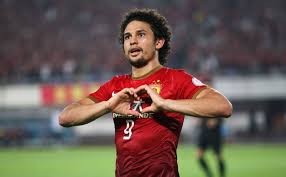 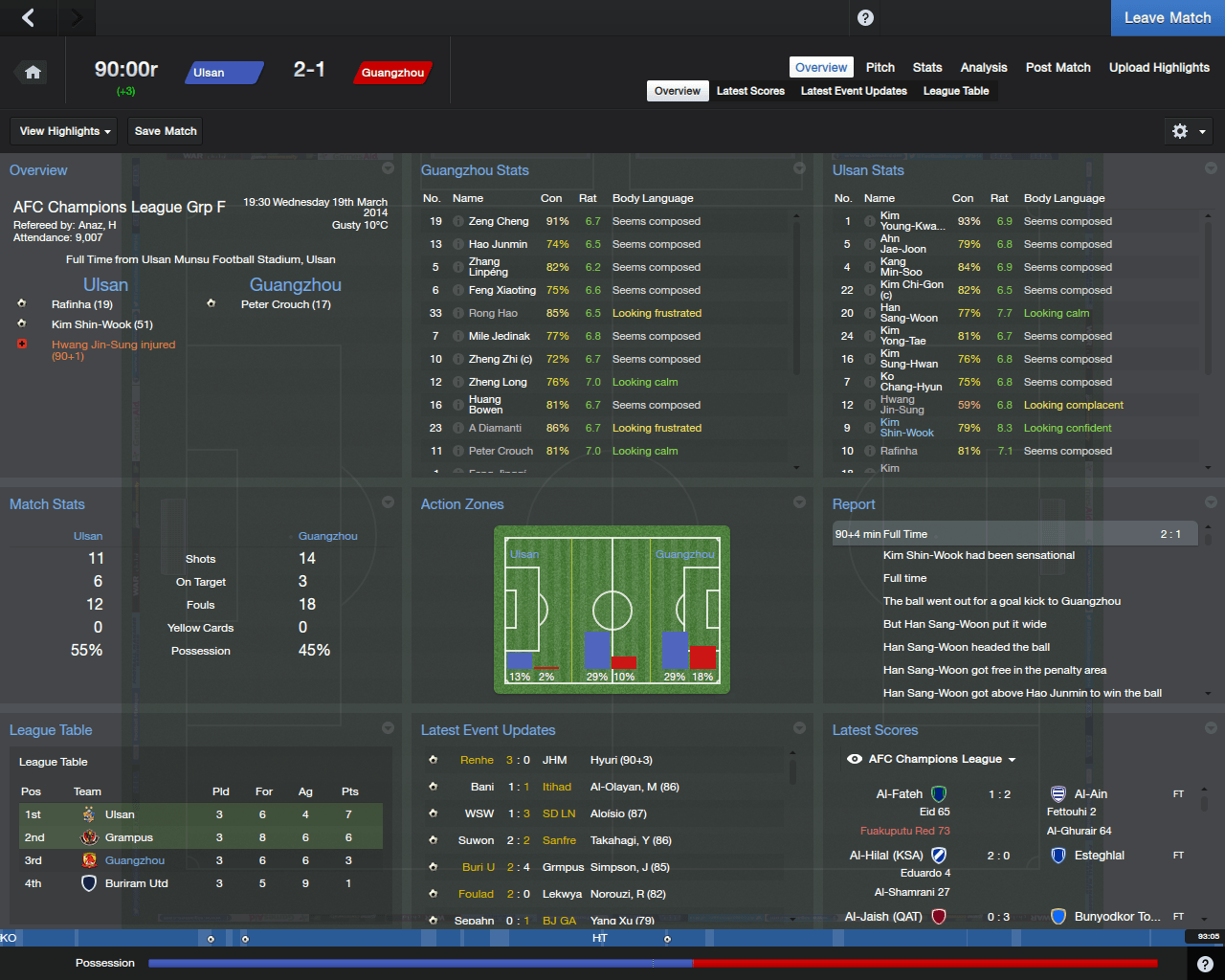 once again we had a hatful of chances and once again weve failed to convert chances into goals, eventually going down 2-1. in the remaining three fixtures ill be expecting a minimum of 7 points which should be enough to put us through
Login to Quote


i honestly beleicve we deserved more from this match against Henda, despite dominating possession and shots on target we just couldnt find that winning goal 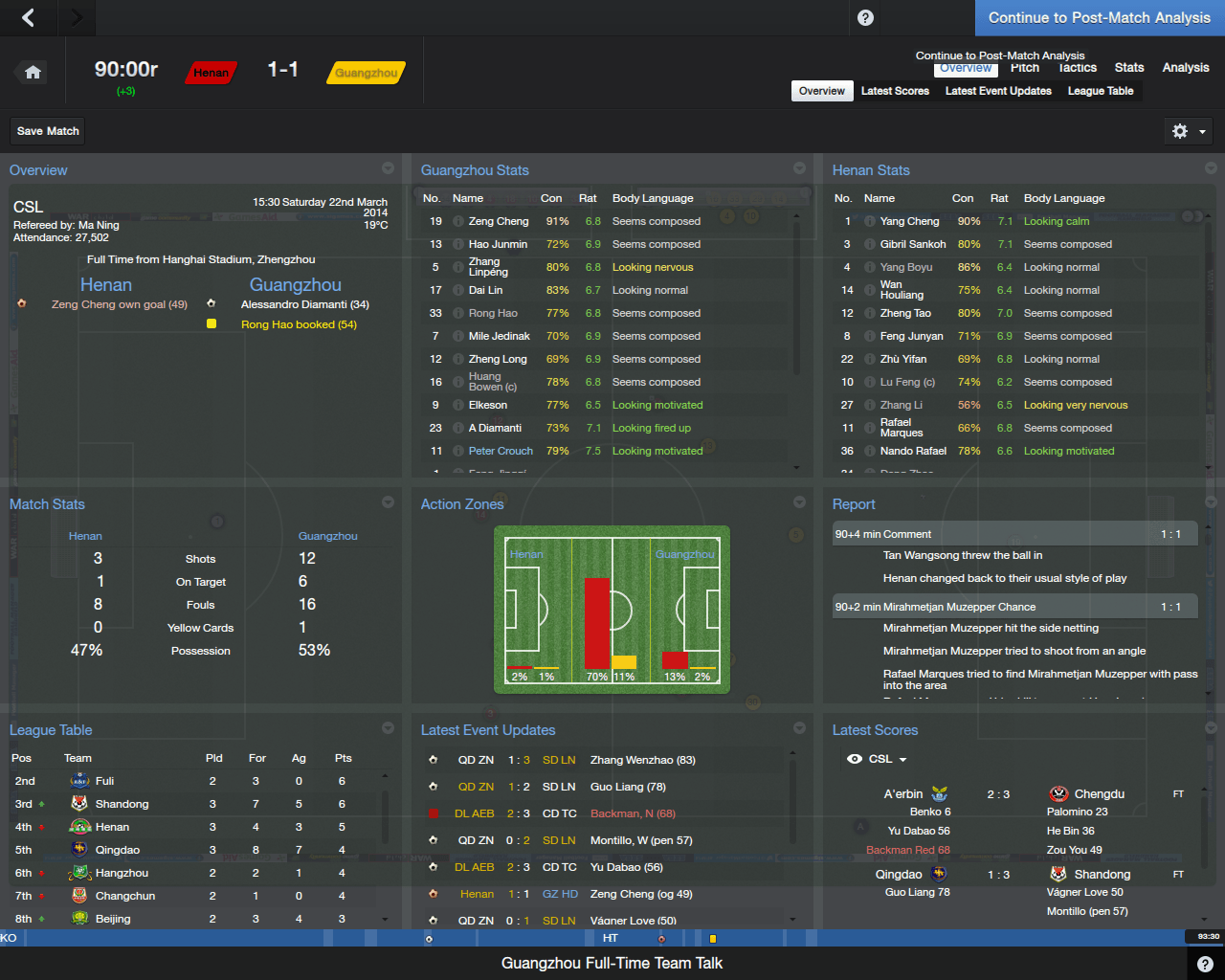 You are reading "Something in the air".