fmhunter
7 years
Some big signings and a mixed start to the season. Hope things work out for you

the months of March and April have been pretty decent in my eyes, remaining consistent with our results and still being undefeated in 13 dating back to last season

our matchday 5 opponents in the AFC Champions League were Nagoya Grampus, it was a match we simply couldn't lose in. my boys turned on a very good display and we pretty much nullified any of there attacks and attempts at goal. this win leaving us in second place with one match remaining [tables posted soon] 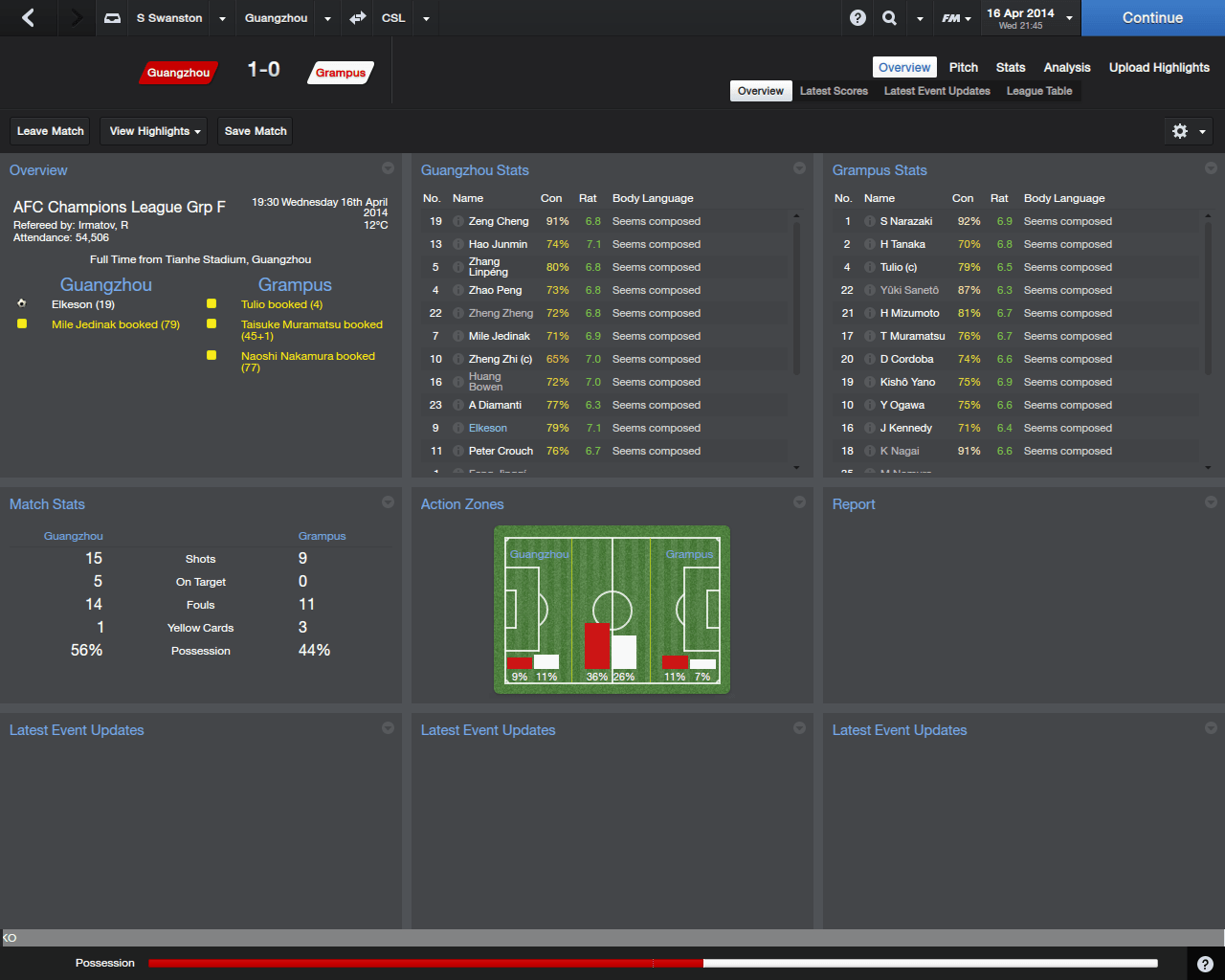 Guangzhou have also offered to renew my contract by a further two years, an offer i did not refuse

Griffo
7 years
Hopefully you can make it out of the group stage, good luck!
Login to Quote


we went into our final group game at home to Ulsan knowing that we would have to win, expecting that Grampus would beat Buriram United, the other match ended up having no bearing on the group though as Grampus dispatched of Buriram 5-0, Ulsan took control early and went up 1-0. we ended up pulling a goal back but it wasn't enough and we eventually went down 2-1 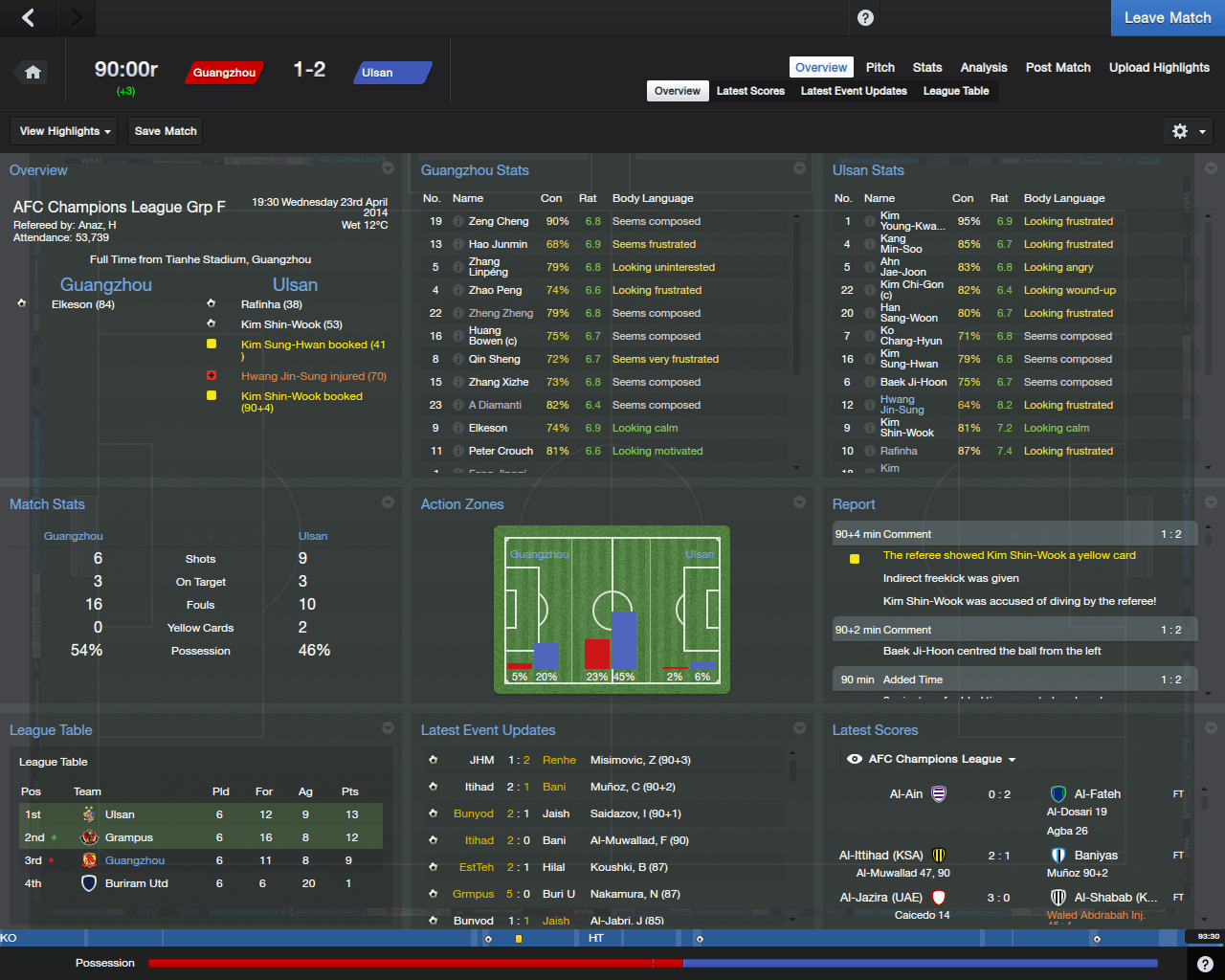 Top of the table clash


todays match was 1st vs 2nd, Fuli the suprise packets so far against league favourites Guangzhou Evergrande, we went into the match knowing a win would put us top of the Chinese super league so i told the team to play an aggressive style of play to limit Fuli's chances, we kept them to 9 shots, we ended up with a 3-1 win, Elkeson with the pick of the goals with a curling effort from just outside the area leaving the keeper rooted to the spot 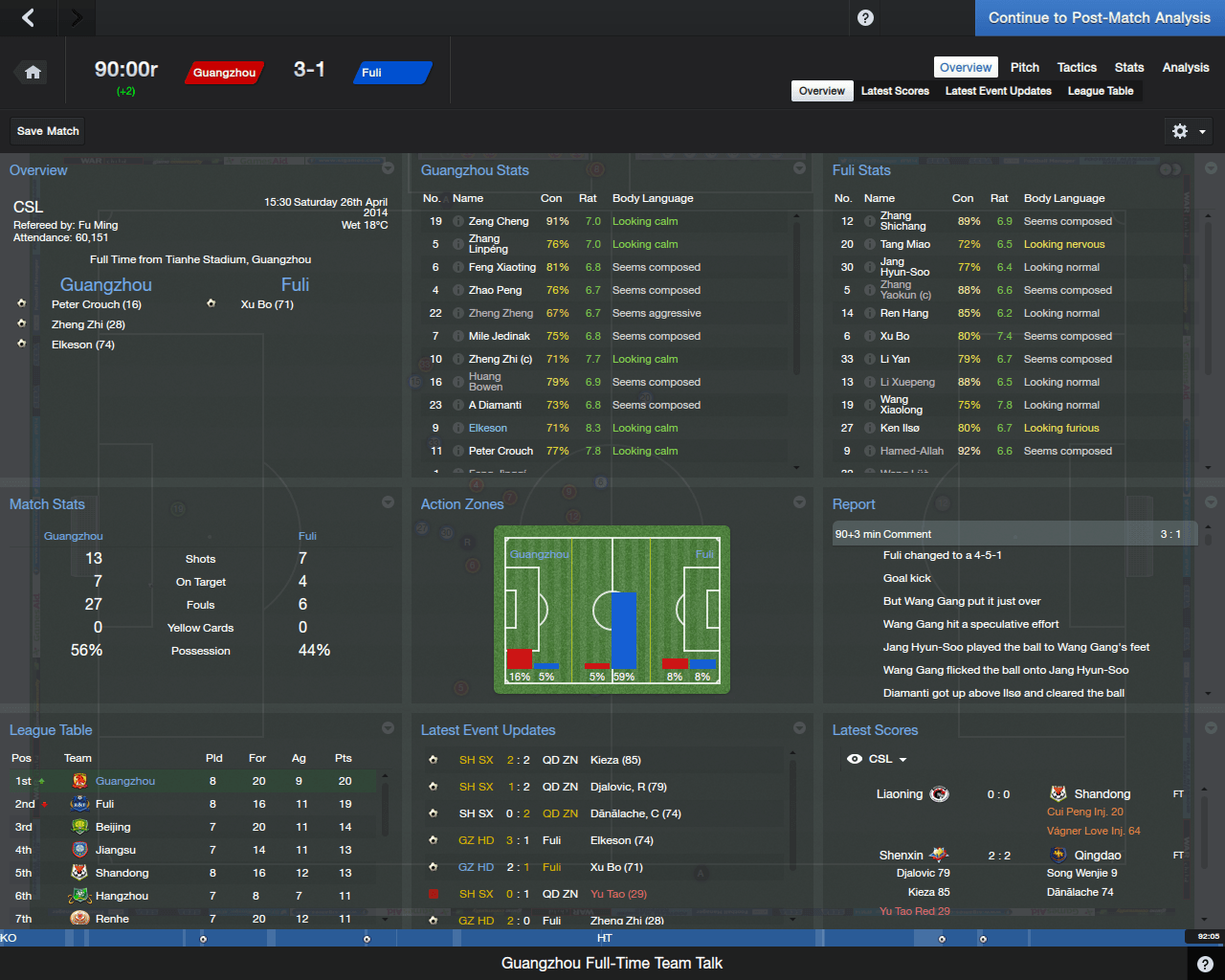 so this win has put us top of the table by 1 point, can we stay at the top?

Griffo
7 years
Hopefully you can get out of the group stage next season, what were the board's expectations?
Login to Quote

@griffo, our expectations were to reach the semi finals, but they understood that we were in a tough group
Login to Quote


a fairly comfortable win against early relegation candidates Dongya in a match we dominated from the outset and definitely should have won by more, but a win is a win nonetheless 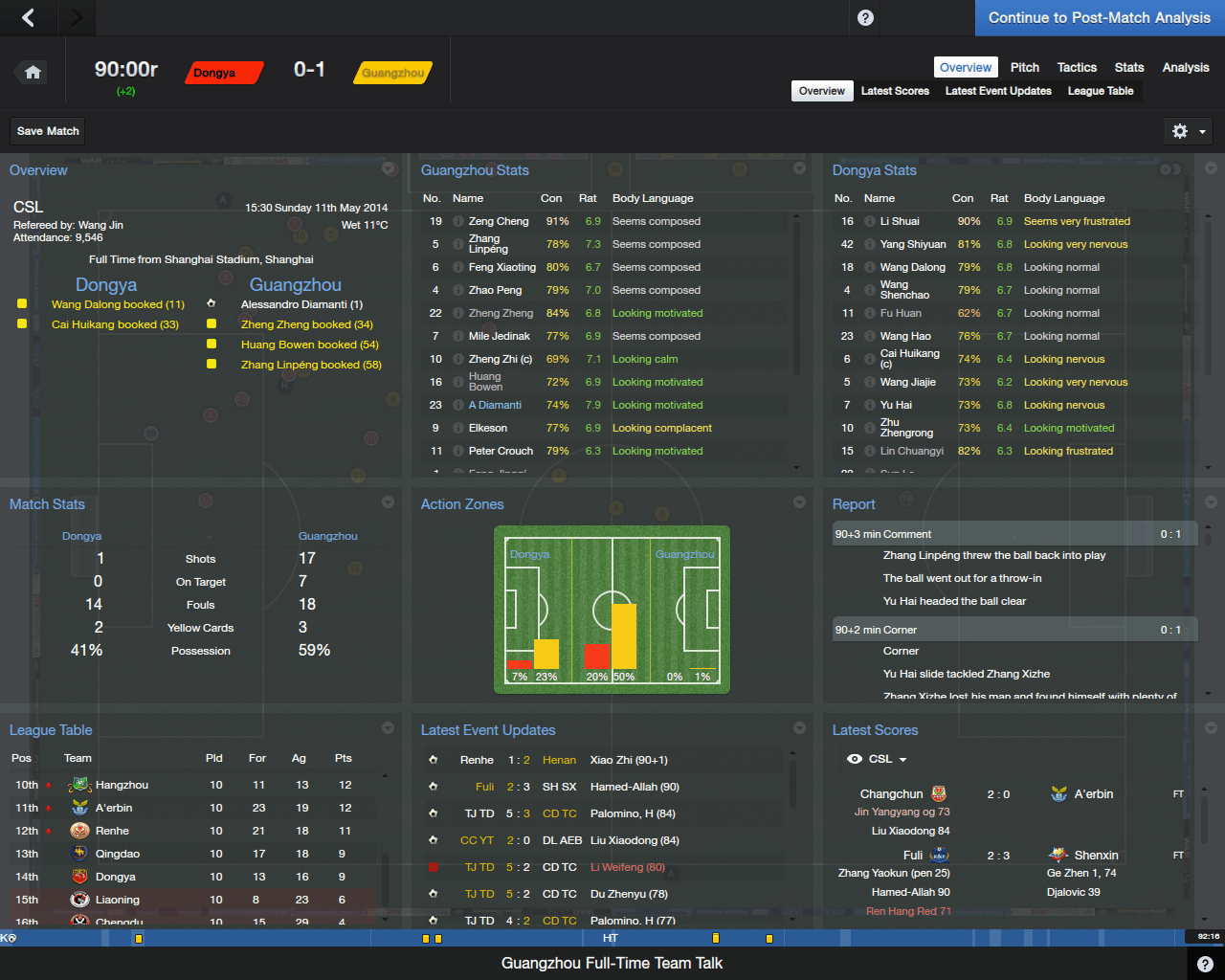 our win against Dongya has put us back on top of proceedings in China, ill be hoping we can stay atop the league at our mid-season break due to the World Cup

swanny8589
7 years
@adamfinchale ill be hoping to sign some young players to. Dont just want a team of aging players
Login to Quote


May was an alright month in terms of results, though we do lose our first match in the league in 9 months so it had its frustrating points thats for sure, but overall im fairly satisfied

we finish May on top of the league by 3 points and are starting to pull away, the next month will be fairly quite due to World Cup participation

swanny8589
7 years
since the transfer window opens in a few weeks time ive been scouring the transfer market for a top foreign import and I think weve found the perfect player to fill the empty midfield role, James Ward Prowse was recently involved in relegation with Southampton and is now available for transfer. Southampton want $33m for him 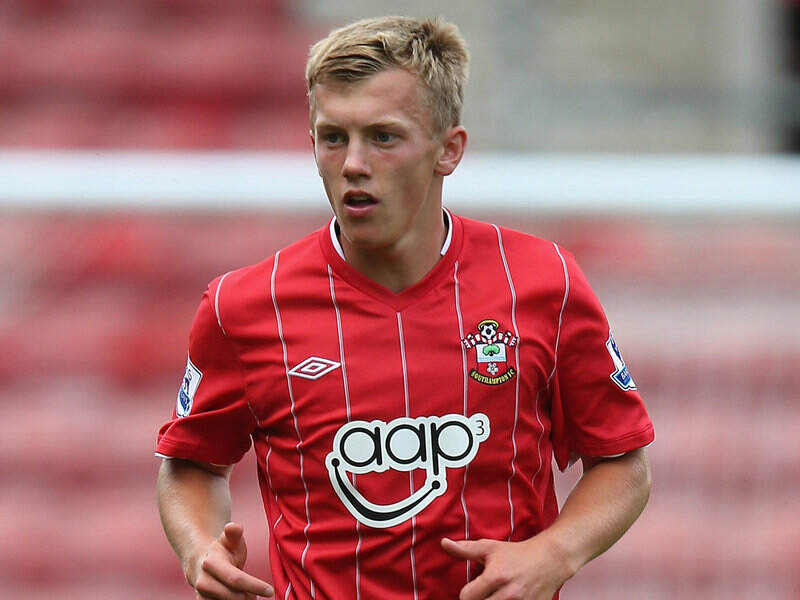 only two matches were played this month because most players are on the verge of leaving for the FIFA World Cup. we finished the month with a win and a draw, we threw away a 2 goal lead in our final match which was disappointing

we still managed to stay top at the end of June and will hope to stay there for the remainder of the season, but..... it will be tough 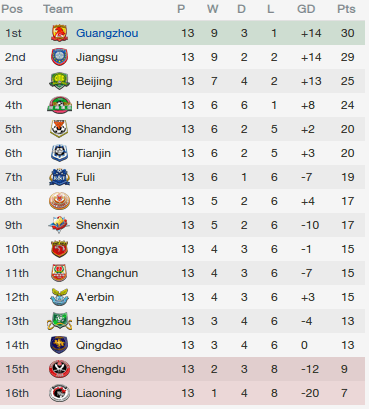 InvertedWingbacks
7 years
Unlucky to lose those 2 goals in that last game, but you still look strong in the league... Keep it up mate!
Login to Quote

swanny8589
7 years
with only days remaining until the transfer window slammed shut i finally managed to bring in two new faces to the club, though i was disappointed not to land Ward Prowse we did land 2 very promising young lads 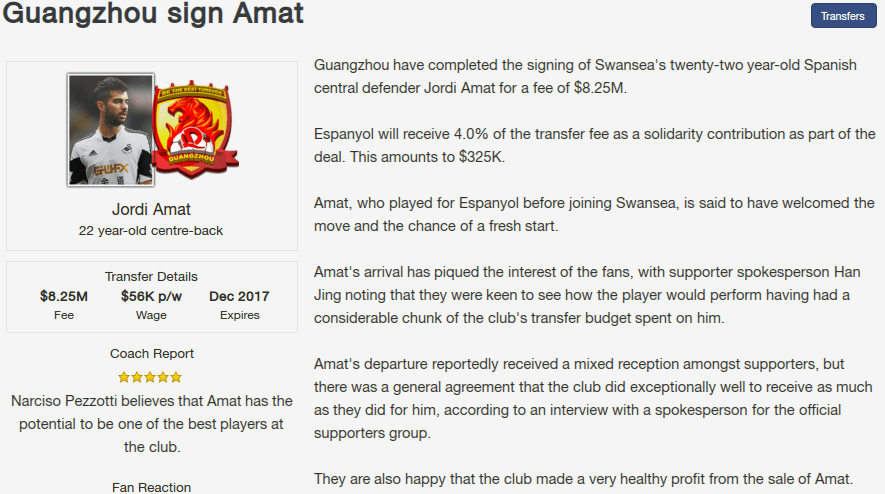 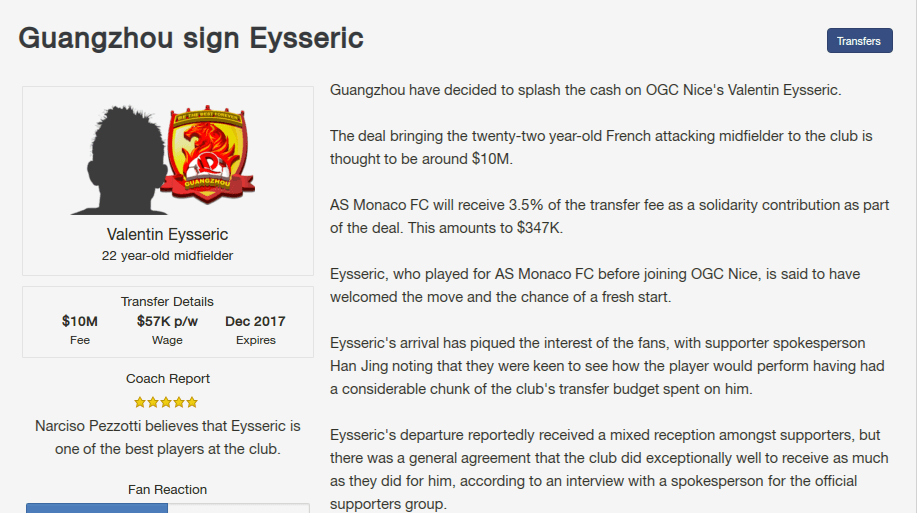 i must say im very pleased we were able to bring such quality to the club, what a massive coup. both Amat and Eysseric are very young and still have plenty of football left in them.
im hoping for big things
Login to Quote

You are reading "Something in the air".