Inspired by Roma's recent mercato ventures I decided to create a Roma based story of my own. However I will begin the story in the summer of 2013 without making any updates, therefore there will be no Champions League (at least not for the first season), no Juan Iturbe, no Ashley Cole, no Seydou Keita etc. Hope you'll enjoy! 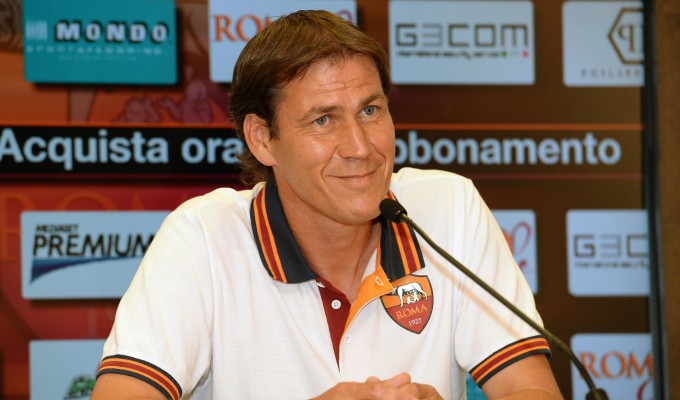 It was only a week ago Rudi García was appointed manager of A.S. Roma, today the club announced his immediate leave of absence for personal reasons. Unconfirmed reports claim García have had reoccurring heart problems which have left him incapable of managing the club.

During todays press conference at Stadio Olimpico, director of football Walter Sabatini revealed that former Roma striker Marco Delvecchio will be given the role as interim manager until Rudi García returns.

Delvecchio will be taking over a squad which have been undoubtedly weakened in the past week. During Garcías short reign several transfers took place, key players such as Pablo Osvaldo, Erik Lamela and Marquinhos left the club whilst players like Maicon, Morgan De Sanctis and Medhi Benatia arrived. Nevertheless, the outgoing transfers have granted Roma and Delvecchio great financial resources for further signings.

Marco Delvecchio is currently on vacation but is expected to arrive in the capital tomorrow for his first press conference as manager of A.S. Roma.
Login to Quote


”We are sad to announce that due to Rudi’s health problems he will not be able to manage the club for the entire 13/14 season, the whole Roma family wish him all the best and hope for his immediate recovery. In times as these certain measures has to be taken, and we can therefore gladly announce that Marco Delvecchio have penned a 1-year contract with the club and will be taking over as manager effective immediately.” - www.asroma.it

Although he was born in Milan and got his football education at Internatzionale Delvecchio is regarded as a legend in Rome. With 269 matches and 77 goals for the capital club between 1995 and 2005 Marco Delvecchio really was a key figure in the team for about a decade. In the 00/01 Scudetto-winning campaign he was a very influential player. The 40-year-old ex-striker will now have the opportunity to pursue his lifelong dream of managing A.S. Roma.

http://forzaitalianfootball.com/wp-content/uploads/2014/04/Marco-Delvecchio.jpeg
”I’m very happy to be here at Stadio Olimpico once again, the club treated me well during my years here and I will do my best to give it back. I’ve been in touch with Rudi García and the club will continue heading in the same direction as he started. Even though we have lost Marquinhos to PSG, Osvaldo to Southampton and Lamela to Tottenham we will be aiming for Europe action next season, some new signings have already arrived and we look to broaden the squad. But will another player arrive? I don’t know, you never know with il calciomercato.”

Regardless of Delvecchio’s words Roma sits on a war chest containing reportedly €15m following their sales and are now looking to bring in a couple of new players to strengthen the squad further. Torino’s versatile defender Matteo Darmian has been heavily linked with a move to the capital as well as his teammate Alessio Cerci.
Login to Quote 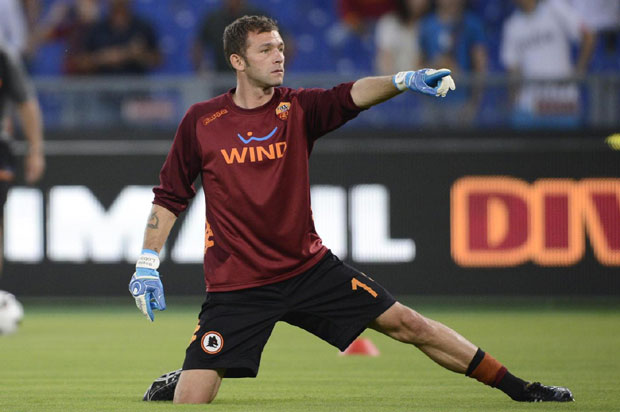 Seasoned goalkeeper Bogdan Lobont is beginning to see the end of his career and want to make his final years worth his while and Qatari club Al-Gharrafa answered his prayers with a bid of €160.000. The now 35-year-old Romanian with an impressive 83 international caps have signed a 2-year contract with the club.

Portuguese defender Ricardo Costa have completed a loan deal from Valencia to Roma. During his time in the capital Roma will pay 50% of his €38.500 wage as well as a monthly fee of €10.000. A fee of €1.7m has been agreed if the capital club wish to make his services permanent. The 32-year-old central defender have previously represented Valencia, Lille, Wolfsburg and Porto.
Login to Quote

http://torinofc.it/sites/default/files/images/photogallery/2014/07/21_10_58/tor21_9745.JPG
Matteo Darmian and Alessio Cerci were both key players in Giampiero Ventura’s squad last season, both making over 30 appearances.
http://www.lazionews.eu/wp-content/uploads/2014/04/800-darmian-torino.jpgMatteo Darmian, who mainly plays as a central defender or right back, received his footballing education at the Milanello but as he failed to break into the first team he was loaned out, first to Padova in Serie B and then to Palermo in Serie A. Following his loan spells he moved to Torino in 2011 for a fee of €900.000. The now 23-year-old Italian is said to have cost ’Giallorossi’ €2.4m in a co-ownership deal stretching over 2 years as well as sending Alessio Romagnoli to ’Toro’ on loan for the coming season. 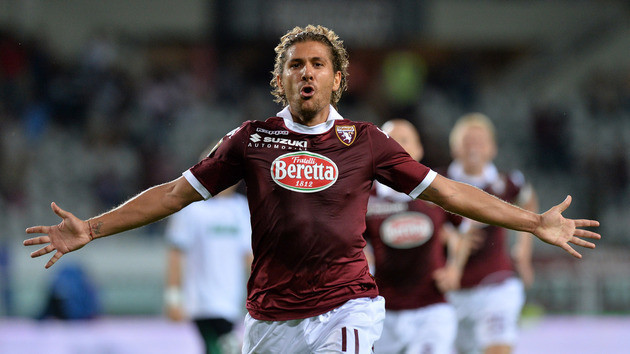 Alessio Cerci was born in Rome and have gone through Roma’s youth system. He made his debut in Serie A for Roma at just 16 years of age. Although his early debut he failed to establish himself in the first team and in the following years he was loaned out to Brescia, Pisa and Atalanta. In 2010 he was bought by Fiorentina for €3.9m. During his spell at ’La Viola’ he was fairly successful with 47 appearances and 12 goals, however problems outside of Artemio Franchi resulted in a €6.25m move to Torino in 2012. His speed and agility have made people draw comparisons with him and Arjen Robben, a fairly exaggerated claim but no doubt he has great potential.

Roma are said to be paying €3.2m for a 50% stake in the 26-year-old winger which will tie him to the capital club for at least 2 seasons.

It remains to be seen if the pair will be available for Roma’s first friendly against their old club Torino. The coming friendlies will played against CSKA Sofia, Real Zaragoza, Valencia and AS Aris.
Login to Quote

Kippax
8 years
AAN : Had to be sacrificed, too big wage for a reserve keeper

But who knows another Romanian may very well be on his way in!
Login to Quote

Neal
8 years
Great signings! Darmian is a great defender, as he showed this summer at the World Cup, and Alessio Cerci always has that special something when I watch Torino play. Hopefully they do well for you

Kippax
8 years
Neal : Yeah, brilliant players both of them! Btw your Roma story is a big inspiration, great really!

bebero
8 years
Cerci is a talent, hope to help you! And Darmian is a player with great potential! Good luck!
1
Login to Quote 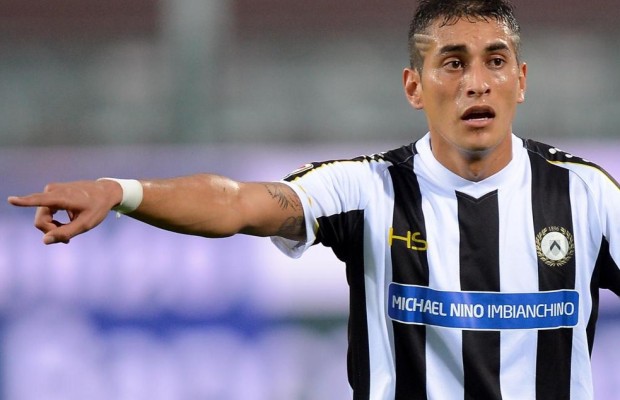 Today Roma announced they’ve purchased 50% of Udinese’s 22-year-old attacking midfielder Roberto Pereyra for €4.8m. The technical Argentinian will however continue to play for Udinese for at least another year, following that the clubs will have to bid for the remaining 50%.

As well as revealing the recent purchase of Pereyra Delvecchio today announced the departure of a couple of youngsters who he feels aren’t ready to play for ’Il Giallorossi’ yet.

17-year-old Tin Jedvaj arrived in Rome from Dinamo Zagreb just weeks ago only to today complete a loan move to SL Benfica for the rest of the season. The Portuguese club will pay a fee of €2.4m for the services of the young Croatian defender. Portuguese clubs are generally known for developing young players from raw material into more complete players, which is what Roma are trying to achieve with this loan.

Following Jedvaj’s departure is Elio Capradossi who will play for Greek AS Aris for the rest of the season. The 17-year-old defender have been named as ”The new Ogbonna” and have had major success in Italy’s U17’s. The loan spell in Greece will grant the young centre back with valuable first team football facing teams such as Olympiacos, Panathinaikos and PAOK.

To no one's surprise the 19-year-old defender Petar Galubovic will be loaned out to SK Sturm Graz for the rest of the season, the Austrian club will have the option to buy him for €2m.
http://www.corrieregiallorosso.com/wp-content/uploads/2014/03/romagnoli-chievo-roma-.jpgLast but absolutely not least is that 18-year-old Alessio Romagnoli’s move to Torino is now a fact. Delvecchio raised many eyebrows when news got out he was about to loan out the Roma starlet to a Serie A rival, especially as many had expected him to make a couple appearances at the Stadio Olimpico. But as Torino sold their vice-captain and star defenseman Kamil Glik to Sassuolo, Romagnoli will now most likely become a frequent starter for ’Il Toro’ which will grant him with invaluable experience.
Login to Quote

http://talksport.com/sites/default/files/tscouk_old_image/Omar-Abdulrahman.jpgEarlier this summer Roma were in business with Al-Ain where a loan deal for Michel Bastos was completed. Today Roma have completed yet another signing from the United Arab Emirate club. 21-year-old Omar Abdulrahman will be seeing a €100.000 transfer to Italy and Roma although in order to get regular first team action he will continue to play for Al-Ain for the following season and then join Roma for their next preseason.

The quick-footed winger have previously sparked interest with Arsenal and Manchester City but as Abdulrahman is a non-EU player there were difficulties with work permission for him in England and no deal was made. Portuguese SL Benfica also made a bid for the Emirati although he turned it down in favour of playing in Serie A.

Abdulrahman has exceptional speed and dribbling capabilities that makes up for his lack of strength. In his 74 appearances for Al-Ain he has scored 22 goals, he's also been capped several times for the national team of UAE.

Signing a player originating from the Middle East will without a doubt increase Roma's financial revenue as there are very few professional footballers in Europe who originates from there.
1
Login to Quote

After the preseason’s five games Roma are still finding it hard to adapt to Delvecchio’s new style of play. Even though not losing a single match Roma have struggled in every one of them. Previous manager Rudi García started playing in a 4-2-3-1 system which Delvecchio have continued to a certain degree. Against the weaker teams Torino, CSKA Sofia and Aris the team played in this formation, resulting in 2 wins and 1 draw. Against the tougher opposition of Valencia and Real Zaragoza Roma played in a more defensive minded 3-5-2 formation, which resulted in 1 win and 1 draw. All in all it was a decent preseason seeing as many first team players were being rested, Roma’s next challenge will be against Parma at Stadio Olimpico in two weeks.

Player of the preseason

http://yallascore.com/news/wp-content/uploads/2014/01/daniele-de-rossi.jpg
Daniele De Rossi, as well as scoring a goal against CSKA Sofia he contributed with 2 assists and great defensive work. Will be a key member for Roma this season.
Login to Quote

We’re in the end of October and after 10 matches Roma are yet to be defeated. With a well disciplined defence led by Valencia-loanee Ricardo Costa the team have kept a whooping 7 clean sheets. But that’s about where it ends, the team have had severe problems with scoring and went goalless for 3 games in a row. Captain and first choice striker Francesco Totti is yet to score and second choice Adem Ljajic have only scored one from the spot. It’s been third choice Mattia Destro who’s proven his worth to Roma by scoring 4 goals (whereas 3 against Lazio).

Player of the months

http://tmw-foto.tccstatic.com/storage/album/thumb1/ebf1511eb49baccaf6db526709e7ddb7-24996-1390070883.jpeg
Mattia Destro, being the club's top scorer so far there is no doubt he's been their most important player. Bagging three goals versus archrival Lazio in 'il Derby della Capitale' also play a big part in this choice.
Login to Quote