Mansfield Town today announced the signing of 42 year old David James as a player/assistant manager. Chris Greenacre plans for David to be a substitute to Sascha Studer while dealing with tactics, training and other managerial aspects.

David James was recently released by Íþróttabandalag Vestmannaeyja in Iceland where he made 17 league appearances.

BBC Sport spoke to David earlier today and he had this to say "I'm very happy with the return to England, I've been in England all my career and to go to Iceland it just didn't feel right so when Chris spoke to me it was a no brainer even though it may be a step down but I'm looking to go into management and everyone has to start somewhere"

Joe
6 years
What a player David James!
Login to Quote 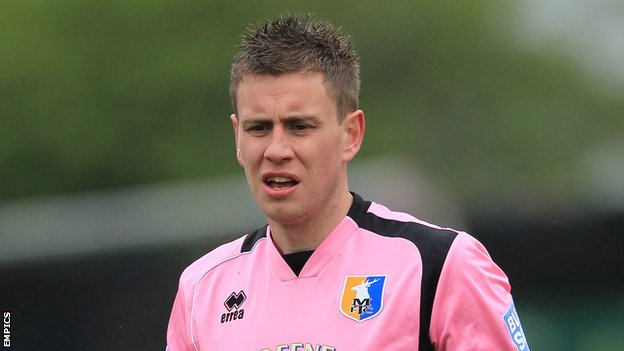 Algassimou Balde, a 28 year old Guinea right winger today joined on a free transfer following his Sporting Toulon Var contract expired this summer. Balde as spent all his senior career in France with the likes of AS Cannes and Angers SCO. The right winger is excited by the prospect of coming to England to finish his career.

Steve Olfers, a 31 year old Dutch center back today joined on a free transfer following his Qabala contract expired, many fans will of heard of Olfers as he's spent the majority of his time in Dutch and many would of noticed him in the Champions Leagues with clubs such as PSV and Feynoord.

Sebastien Gregori, a 32 year old French center midfielder today joined on a free transfer following his Hapoel Nazareth-llit contract expired, Sebastien started his career at Marseille before moving onto clubs such as Lustianos, AC Ajaccio and AS Cannes.

Samir Bertin d'Avesnes, a 27 year old Comoros right winger today joined on a free transfer following 2 years without a club, he was at AS Beauvias for two years and before that spent most of his career at SC Bastia.

Remi Cilia, a 23 year old French right back also joined on a free transfer following his AC Ajaccio contract expired despite spending 6 years with the club he only made 14 appearances so he'll be looking to grab some first team football.

Armand N'Djama, a 25 year old Cameroon center back today joined on a free transfer following his RC Strasbourg Alsace contract had expired, he's spent all his career in France and now looks to revive is career over in England

Alvaro Gonzalez, a 21 year old Spanish center attacking midfielder today joined on a free transfer following his Alcoyano contract had expired, he's previously been at clubs such as San Roque Lepe and Recretivo "B"

Chris Greenacre today secured five players after the start of re modelling begins at the One Call Stadium and there seems to be many more to come according to the stags boss as the pressure begins following the release of 19 players.

Mohammed Gulraiz, a 23 year old French left winger today joined on a free transfer following his Udinese contract expired two years ago and failed to find a club in that time, his other previous clubs was Granada B and Arezzo.

Yohan M'Villa, a 24 year old French center midfielder also joined on a free transfer following his Olympic Charleroli contract expired, previous to that he was it Dijon FCO and AC Ajaccio.

Mickael Brisset, a 28 year old French striker today joined on a free transfer following his US Ivry Football contract had expired, Mickael has had a few clubs in his career with the likes of Angers SCO, FC Lorient, Paris FC and Tourani.

Ross Jenkins, a 22 year old English center midfielder today joined on a free transfer after Watford didn't want any money for the youngster. Ross as spent all his career at Watford and last season was on loan at Barnet and Plymouth.

Tom Naylor, a 22 year old English center back today joined on a free transfer after Derby didn't want any money for the youngster. This is Naylors second spell at Mansfield Town after being sold for £100k to Derby a few seasons ago but failed to break into the first team.

k1rups
6 years
Lots of signings but it was needed! Great start so far mate and will be interesting to see how old Ryan Tafazoli does seeing as we used to play together at high school!
Login to Quote

Ducksworthh
6 years
Quality signings for Mansfield. Keep it up

Chris Greenacre today secured four players on loan to add depth to his squad and in the worst case of injuries he has players awaiting.

Joel Byrom, a 26 year old English left winger today joined on a season long loan after Preston had sufficient players and it looked unlikely he would feature. Joel has been at 9 clubs despite him only being 26, some of the clubs include Blackburn, Stevenage and Accrington.

Donal McDermott, a 23 year old Irish right winger also joined on a season long loan after Bournemouth agreed to lose the player for a season despite him making 8 appearances in the championship last term. Donal started his career at Man City and was loaned out to 4 clubs in the football league before signing for Huddersfield on a free and then joining Bournemouth for a undisclosed fee.

Morgan Fox, a 19 year old Welsh left back today joined on a season long loan from Charlton Athletic, Morgan started his career at Ipswich before getting transferred to Charlton where he's spent his last 4 seasons without making a single competitive appearance.

Luke O'Neil, a 22 year old English right back today joined on a season long loan from Burnley after he was sold to Burnley by Mansfield 2 seasons ago for £200k and now is back at the Mill for a season.

Stags Release Three And Loan One Out

Mansfield Town today shocked fans as they released Liam Hearn, Simon Helop and Luke Jones as they was deemed surplus to requirements by manager Chris Greenacre.

On a positive young midfielder Jack Thomas as signed a 3 year contract despite Leeds United coming in for a offer of £300k for the promising home born stags player. He's now been loaned out to Stockport County to gain first team experience and Chris Greenacre is closely watching is development and hoping he can be brought into the first squad next season, if not he will be loaned out again to a higher club.

Today we are going to preview Mansfield Town Football Club of the Sky Bet League Two, after owner John Radford sacked Mansfields saviour from Non-Leauge Paul Cox earlier this month, he was replaced by former fans favourite Chris Greenacre who's been spent his last football days at Wellington Phoenix before being appointed assistant manager there as finally had his call back home to manage a club he fell in love with. Chris was very busy in the first few days which included the sacking of assistant manager Adam Murray and appointing ex England international David James as his replacement as player/assistant. Transfer wise the stags have been very busy releasing a total of 25 players keeping only 5 players that was under Paul Coxs reign. A total of 18 players have been brought in.

We are going to go through every player today to give people i idea of who's actually who at the club as even Mansfield fans cannot keep up with the transfers!

Very, very tough competition for the number 1 kit as David still as the ability to play this level and will keep Studer on his toes, on the plus Sascha can learn so much from the ex England international which can only be beneficial for the Swiss keeper.

This could be a weakness for Mansfield this season, especially if Luke O'Neil gets injured as Tom Naylor is a natural center back but can cover the position, if they both get injured then a short term loan would have to be brought in, maybe this is a position Chris is aware of and a back up could be purchased in January as Luke O'Neil will be leaving at the end of the season

Remi Cilia will be the first choice here based on the fact Morgan Fox as never played a competitive game but all could change if Cilia picks up a injury as theres nobody else to cover so he would be dropped in at the deep end, Morgan will hopefully be ready if he does need to step up.

If i was to guess the first choice center backs would have to be Steve Olfers due to his experience and determination along with home star Ryan Tafazoli who's being scouted by bigger clubs every season, Martin Riley and N'Djama are suitable replacements should anything happen and also Tom Naylor is around if he needs to be used.

I can't see past Mohammed Gulraiz to be the first choice here, his speed and skill on the wing will terrify most defenders in this league, Sam Clucas will mainly be used as a sub as he scored many last season from that position, Joel Byrom i imagine will be on the bench waiting.

This is the position i just can't call if I'm honest, 3 very strong right wingers who are all completely different in how they play, Donal is very quick and his good skill and determination while Samir is quicker than Donal but not as Technical and Balde is very skillful on the wing but not as quick.

Another position where Mansfield could be punished if one gets injured but other players can fill in here such as Clucas, the main two players here has to be M'Villa and Gregori with Jenkins making a impact from the bench, a 3 month loan could be purchased if any got injured for the season.

As Mansfield play a attacking midfielder they only have on in Alvaro but Byrom could fill in if needed so we don't need to tell you who the first choice player is here, he's probably one of the best in the squad.

Mansfield only play one up front and it's pretty hard to decide which one will be starting as they are all fantastic for this league and any of them can score, given the chance. I'm going to go with Koita to start and be there top scorer for the season.