It's gone for me too, I'll try to find out a reason why.

btw....Arsenal playing in yellow and blue over red and white against a team which wears blue.....logic?


Well, there goes my prediction!
Login to Quote

The 510 Series
8 years
Our defending has been fucking woeful. Again. Martínez really needs to sort himself out here, and fast.
Login to Quote

The 510 Series
8 years
I'm bloody livid that my two favourite teams can't hold onto a two-goal lead. There's no excuse for it, although being an Everton and Tranmere fan means that I've become used to a bad start. But there's no excuse for throwing away a lead like that so late in the game.
Login to Quote

Justice
8 years
I'm going to presume that this is common knowledge by now but for those who don't know yet, Angel Dí Maria will become a Manchester United player sometime next week and will wear the Number Seven shirt.
Login to Quote 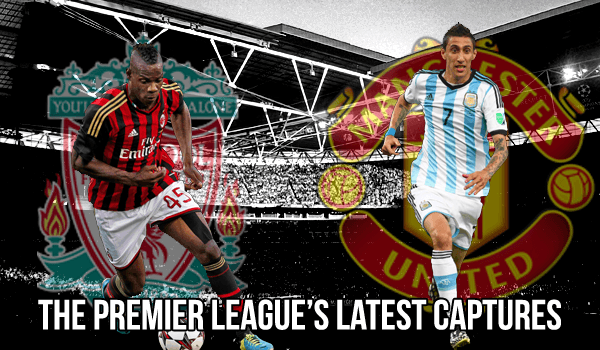 With the signings of Mario Balotelli (£16M) and Angel Dí Maria (£55-60M) for Liverpool and Manchester United, respectively, to be completed next week, which signing are you more impressed with?
Login to Quote

LFC
8 years
Impressed with the fee we are getting Balo for, but impressed that United are able to lure Di Maria.
Login to Quote

Nick
8 years
Di Maria is an amazing player, was amazing for Real in the CL Final, and the type of class that no-one assumed United could buy as they weren't in the CL. Although it seems an odd signing when you consider who United already have in that area of the pitch - they really need a CM / CB.

Balotelli, if he can be bothered, can be amazing, but it really remains to be seen if Rodgers can rein him in. He's caused a poisonous atmosphere in every dressing room he's been in, and I think the big difference between him and Suarez (apart from class) is that Suarez was a massive team player, which I'm not really sure Balotelli is.

In terms of price, Balotelli will be a real bargain, most likely one of the bargains of the season - especially if he does play to his potential... Surprised no-one else has taken a gamble on him for such a price.

Di Maria, probably overpriced, def. not needed. Although if they shift Welbeck and someone else, with Nani already shifted and bring in Di Maria, then I suppose it could work. We saw with Arsenal last year what happens when you bring in a world class player.

Overall, the most impressive deal is Balotelli, but I'm more excited to see Di Maria, just because we've seen Balotelli in the league before, where as Di Maria will be new. Also there's the fact that I don't really like Balotelli as a person
Login to Quote 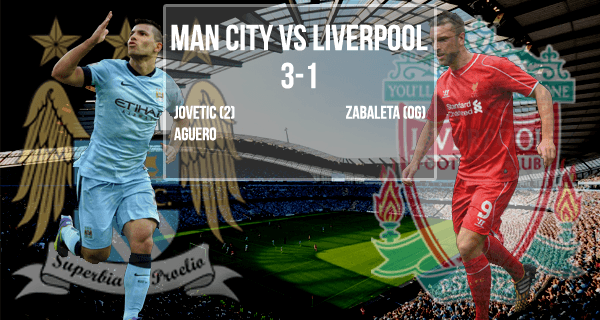 On a wet night in Manchester, the Premier League's reigning champions Manchester City overpowered a Liverpool side bereft of confidence. A Brace from the in-form Stefan Jovetic and a cunning finish from World Cup runner-up Sergio Agüero put the Merseyside club to the swort, with only Pablo Zabaleta's unfortunate own-goal handing them any sort of consolation.

Liverpool started the game brightly with the upper hand on possession stats and were coming out on top of fifty-fifty tackles and aerial duals. However, despite thirty minutes of ball-domination, Liverpool's two best chances did not even break the sweat of English goalkeeper Joe Hart, who had a very uneventful game in nets. A typical Steven Gerrard long-ball found Raheem Sterling just inside the box with his back to goal but he was unable to turn comfortably and his shot rolled out for a goal kick. Raheem Sterling was involved in Liverpool's next chance as he cut in from the right wing which he had been operating from and picked out Daniel Sturridge who expertly got the better of Manchester City skipper Vincent Kompany but his shot was straight at Joe Hart who easily deflected it wide.

As the half progressed, Manchester City began to settle in to the game and the quality in their attack began to show. Samir Nasri made a show of Liverpool debutant Alberto Moreno on City's right wing, combining sheer physicality and graceful ball control to deceive and defeat the Spaniard. His cross was cleared by Lovren but only as far Zabaleta and City kept battered Liverpool's shaky defence like a relentless, stormy sea.

The killing blow came through a positional error from Dejan Lovren and poor awareness from Alberto Moreno. Stefan Jovetic played in a hopeful cross towards his strike-partner Dzeko but it was easily cut out by Dejan Lovren. However, he was well out of position and his header to team-mate Moreno was a little short as Jovetic pounced on the rebound while Moreno was still composing himself and powered a shot through the legs of the flailing Simon Mignolet to open the scoring and end the half on a high for the team in blue.

Many expected Liverpool to fight back in the second half but they returned to their nervy selves and City were exposing gaps in the final third far too often. The second goal was another gift as Liverpool gave the ball away cheaply and Edin Dzeko found Stefan Jovetic who powered a shot past a helpless Mignolet and a careless Glen Johnson, who foolishly abandoned marking the Montenegro attacker to cover the goal-line, which ended up hindering his own goalkeeper's chances of reaching the shot.

With the game surely put to bed, Brendan Rodgers brought on three of his summer acquisitions, one at a time, as Rickie Lambert, Lazar Markovic and Emre Can entered the fray. Sergio Agüero also entered the game for City as Dzeko limped off after seemingly being fouled by Martin Skrtel. However, the move brought an instant impact as it took Sergio Agüero just 23 seconds to find the net since coming on the pitch. Once again, Liverpool were exposed and Simon Mignolet was well out of position as Agüero rolled the ball in to the net for one of his easiest goals in the Premier League.

Liverpool did earn a consolation goal through a rare moment of quality from Daniel Sturridge. The striker did well on the right wing to open up space and played a tidy cross to the unmarked Rickie Lambert who's header was excellently saved by Joe Hart. However, the rebound took an unfortunate bounce off Pablo Zabaleta and despite Joe Hart's best attempts, the referee awarded a goal to Liverpool, with the aid of goal-line technology.

Despite conceding, Manchester City looked to grow in confidence and gave their fans something to be happy for, while Liverpool fans looked in despair as Glen Johnson was forced off with an injury and Martin Skrtel and Alberto Moreno both picked up damaging knocks. Quality of player proved to be the difference as Manchester City's ruthless attacks forced many mistakes out of Liverpool but a comparatively mediocre Liverpool line-up rarely forced the victors' hand.

This match showed a lot about both clubs; Manchester City are far superior to last year's runners-up. The recent arrival of Mario Balotelli will surely help Liverpool's cause but will this upset force Brendan Rodgers to dip his toes in to the transfer market once more?
Login to Quote

But you highlighted all of the main talking points. Thanks for filling me in on the game.

The 510 Series
8 years
Hooray! We won a match!
Login to Quote

PS: I hate the word banter and will try to refrain from using it ever again.
Login to Quote